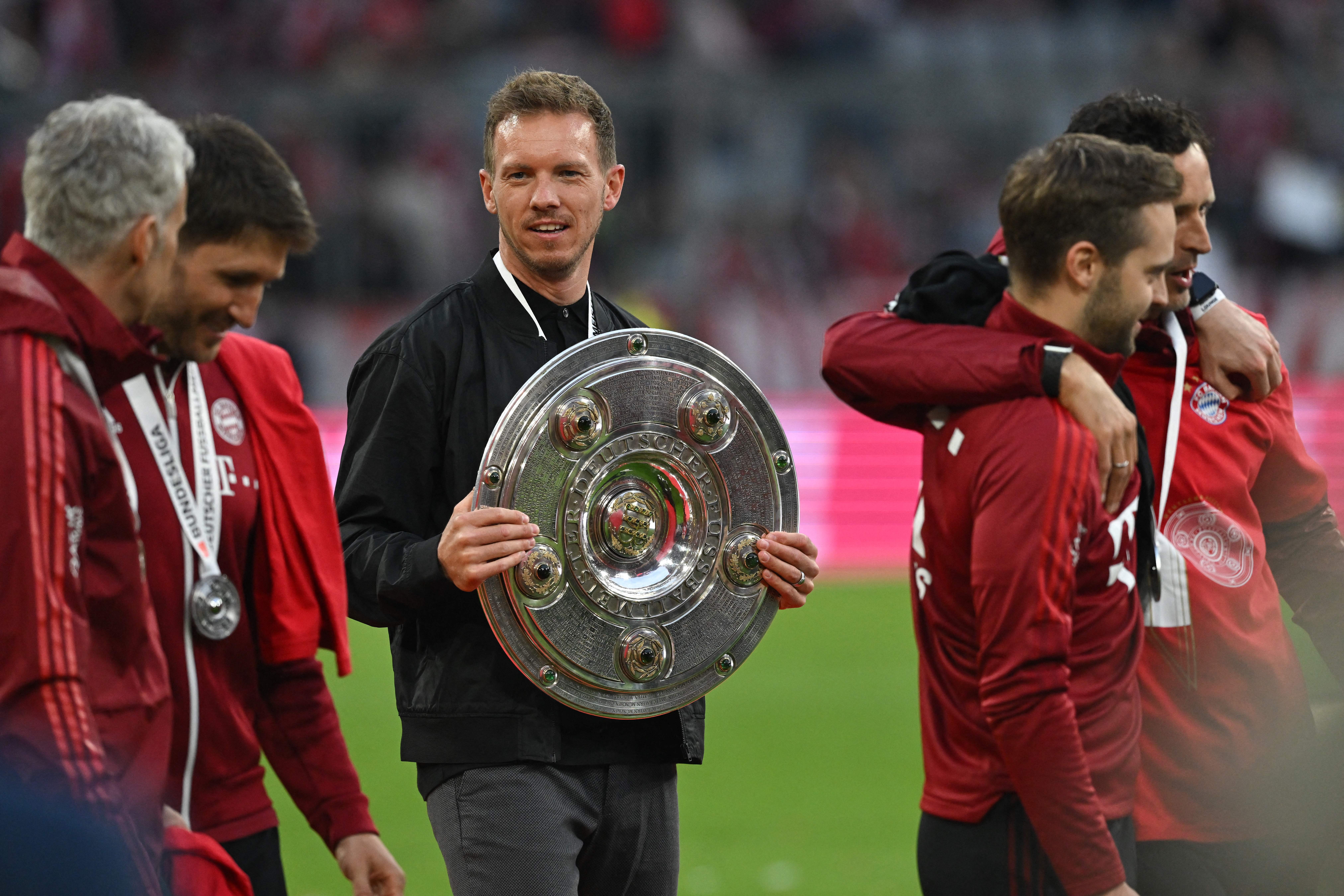 Just 83 days after Bayern Munich won a record-extending 32nd Bundesliga title and their tenth on the bounce, the new season in Germany’s top-tier football dawns.

Germany’s top flight rarely disappoints in terms of entertainment and high-scoring contests, even though the Bavarians have established a long-term monopoly.

While there is virtually no doubt who will be at the top of the table come May 2023, there could be plenty of drama in a battle for the European spots and the lower reaches.

When thinking of the potential Bundesliga winners, perennial German champions Bayern first spring to mind, and there is a good reason for that.

Since Jurgen Klopp navigated Borussia Dortmund to a rare Bundesliga title in 2011/12, the Bavarian heavyweights have won ten successive league crowns without breaking a sweat.

On top of that, Robert Lewandowski & Co netted a staggering 97 goals at an average of 2.85 per game, summing up their status as Germany’s supreme force in a nutshell.

Even though Lewandowski called time on his illustrious eight-year stint at the Allianz Arena to join Barcelona this summer, the Bavarians will be odds-on favourites to maintain their formidable domestic run.

For years, Dortmund have been forced to play second fiddle to Bayern, with not even Erling Haaland managing to drive them out of the Bavarians’ shadow.

Without the Norwegian goalscoring machine in the picture, new boss Edin Terzic will be in a world of trouble as he looks to cut Bayern’s long-term dominance short.

A run of three runner-up finishes across the past four Bundesliga seasons suggests Die Borussen are the only viable candidate to fight Nagelsmann’s side for the crown.

Unless Terzic finds a way to keep his men competitive in the Der Klassiker showpieces and prevent them from spurning points against so-called ‘smaller teams,’ they would have to settle for another second-place finish.

The abovementioned duo headline a plethora of clubs who will likely battle it out for the four Champions League promotion spots.

During Bayern’s ten-year tenure in the Bundesliga, Dortmund have only failed to qualify for Europe’s most prestigious cup competition once, courtesy of an underwhelming seventh-place finish in 2014/15.

So barring some highly unexpected developments, the two should be safe and sound regarding their chances of forcing their way into the Champions League.

As ever, Bayer Leverkusen and RB Leipzig will be staking their claim for the two remaining top-four places, as was the case last season, where both achieved Champions League promotion.

While Leverkusen strolled to a respectable third-place finish, Leipzig toppled Union Berlin to the coveted fourth spot by the skin of their teeth, doing so on the final day of the season.

Domenico Tedesco’s men have been relatively quiet this summer, though Christopher Nkunku’s contract extension could be considered a major coup for the Red Bull outfit.

Like Leipzig, Leverkusen have been more focused on keeping hold of their star players, including Patrik Schick and Florian Wirtz, than strengthening their squad.

Despite an uneventful recruitment campaign, both sides should be able to replicate last season’s feat.

Union Berlin and Freiburg defied the odds to secure promotion to the Europa League last season, leaving the likes of Borussia Monchengladbach and Eintracht Frankfurt in their wake.

On top of that, Koln, who fought tooth and nail to avoid relegation in 2020/21, earned their place in the Europa Conference League qualification play-offs.

Once again, the Bundesliga lived up to the billing as one of Europe’s most unpredictable elite divisions, as further witnessed by Wolfsburg’s embarrassing 12th-place finish.

While Oliver Glasner guided Die Adler to a long-awaited continental success in his maiden season at the helm, his side ended up in a horrific 11th place last Bundesliga season.

But after acquiring the signatures of Mario Gotze and Lucas Alario and retaining the services of Filip Kostic and Rafael Santos Borre, Frankfurt will be genuine European contenders in 2022/23.

As for Gladbach, the appointment of Daniel Farke as their new chief of staff bodes well for the club’s ambition to leave last season’s dreadful bottom-half finish firmly behind them.

Despite losing star forward Breel Embolo to the likes of Ligue 1 powerhouse Monaco, Die Fohlen should feel safe in the hands of the former Norwich City manager.

Farke proved his managerial credentials during his four-year stint at Carrow Road, helping the Canaries book their tickets for the Premier League twice.

Given Union Berlin’s performances in 2021/22, it is hard to put it past them to stage another upset this time around, especially considering they narrowly missed out on qualifying for Champions League football.

Watch out for Wolfsburg, who have recruited well this summer, adding several exciting young prospects to their pacey, juvenile squad.

Augsburg and Stuttgart barely kept their heads afloat last season to extend their top-flight status to another campaign.

While the former finished just a point clear of the dreaded play-off relegation spot, a superior H2H record to Hertha BSC helped the latter stay safe.

If it weren’t for the household German tactician Felix Magath, Die Alte Dame could have been playing in the second tier in 2022/23.

A second-leg play-off comeback saved Hertha from relegation at the expense of second-tier giants Hamburger SV.

It will be up to new manager Sandro Schwarz to orchestrate a safer Bundesliga campaign for one of the most famous German clubs next term.

But a lack of quality signings this summer could hinder Hertha’s bid to avoid another nerve-shredding season.

If you are looking for the hottest candidates to drop out to the Bundesliga 2, perennial top-flight strugglers Augsburg appeal as a likely pick after years of dodging the bullet by the tiniest of margins.

As was the case with HSV, who were dancing on the edge for years before finally suffering their first-ever relegation in 2017/18, Die Fuggerstadter have been flirting with the drop zone for too many seasons.

A left-field shout for relegation candidates could be Mainz 05 despite an eye-catching eight-placed finish last season.

Bo Svensson’s side experienced a sticky patch down the final stretch of 2021/22, showing numerous signs of weakness at the back while simultaneously failing to impress up front.

For years, the German Bundesliga has been a factory of talents, and nothing should change next term. We’ve picked out three we think are worth your attention.

At 20, Gravenberch is carrying a reputation as one of the hottest midfield prospects in Europe following a few dazzling years at Ajax, having learnt his trait from new Manchester United boss Erik ten Hag.

He was one of the standout performers in the Eredivisie last season, with his passing ability and defensive effortlessness making the world of football fawn over his potential.

Despite his young age, the versatile Dutch starlet will be under the microscope next season as Bayern dashed out €18m to take him away from Amsterdam.

Alongside Joshua Kimmich, Gravenberch could develop into a world-class midfielder.

Wirtz has seized the opportunity to become Leverkusen’s headline attacking midfielder in the wake of Julian Brandt’s departure for Dortmund in summer 2019.

Using his glittering technical skills and laser-sharp passing precision to unlock defences, the 19-year-old playmaker has been grabbing the Bundesliga headlines over the past couple of years.

Before picking up a long-term knee injury at the tail-end of last season, Wirtz was on course to becoming one of the most sought-after European prospects.

Keep an eye on him next season.

Long before making his senior debut for Dortmund in November 2020, teenage sensation Moukoko was tipped for greatness.

While enjoying a rise to stardom at the club’s youth ranks, the lightning-fast forward tallied a staggering 141 goals across 88 appearances.

Haaland’s presence at the Signal Iduna Park forced Moukoko to the fringes last term, but with the Norwegian gone for Manchester City, next season could mark his senior breakthrough.

The youngest-ever Bundesliga goalscorer is the one to keep an eye on in 2022/23.