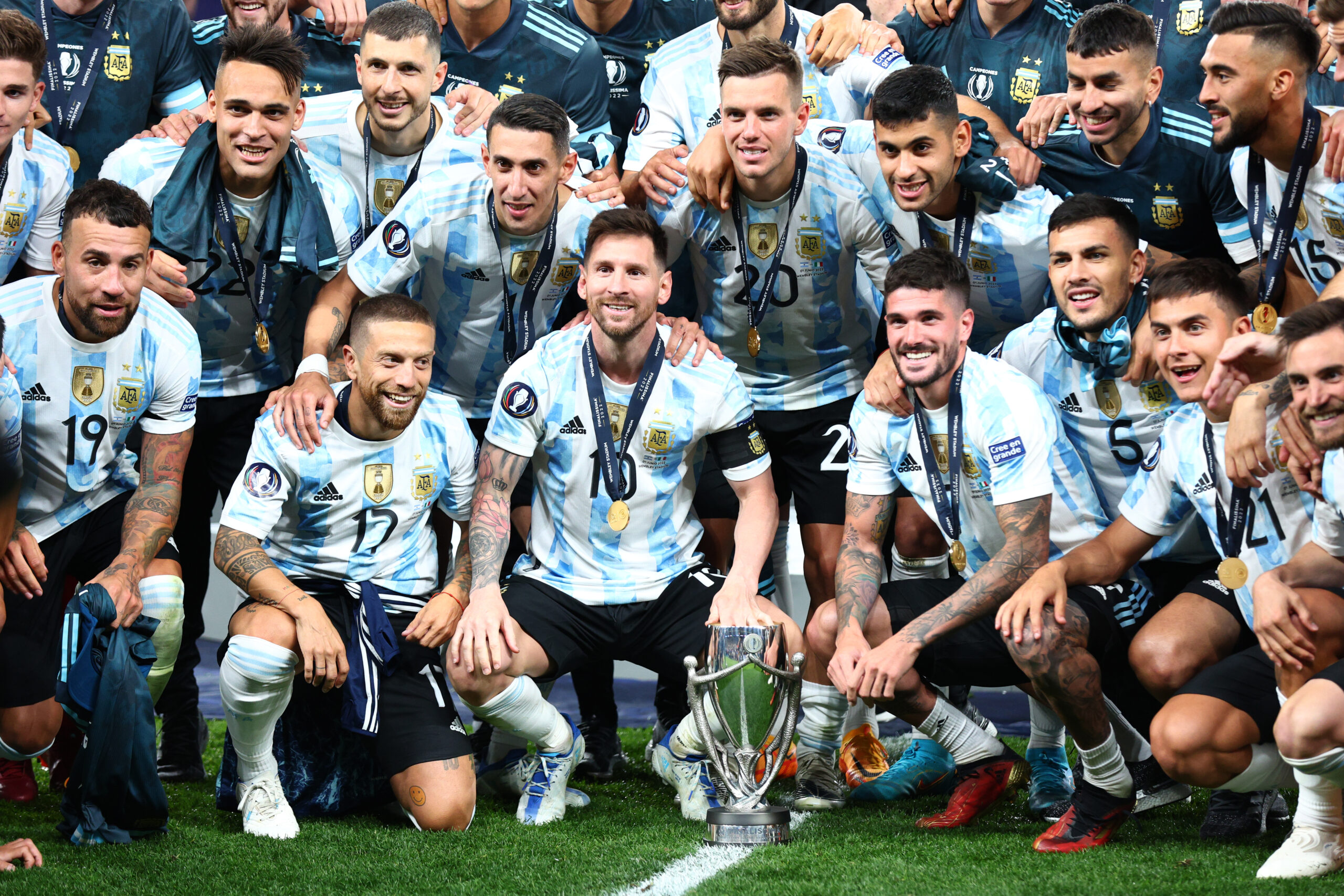 Back in April, we decided to rank the 29 teams who had confirmed their place at this year’s World Cup.

Two-and-a-half months on, and a lot has changed in that time. Three more nations have booked their tickets to Qatar, completing the tournament’s line-up. Meanwhile, there was another international break which gave us more insight into each team.

With five months to go before the first game of the World Cup, here is how we rank every nation’s chances at lifting the trophy.

In our last ranking, we had Saudi Arabia in last place. Since then, they have played friendlies against Venezuela and Colombia and lost both without scoring a goal. They have given us little reason to move them up.

Ghana go into the World Cup as the competition’s lowest ranked side in the FIFA World Rankings. Coupled with the fact that they’ve won just one from their last ten outings, we can’t see them getting very far.

Japan have been a bit of a mixed bag over the last two weeks. They registered emphatic wins over Paraguay and Ghana, but were comfortably beaten by Tunisia and also lost to Brazil.

Hajime Moriyasu’s men are unlucky enough to have been drawn into the ‘group of death’. They will have to finish above one of Spain and Germany to stand a chance of reaching the knockouts.

The Socceroos would have been disappointed not to have qualified automatically. Nonetheless, they saw off United Arab Emirates and Peru in the play-offs to reach the World Cup.

In 2018, they registered just one point and exited in the group stages. They will be desperate to make amends this time around.

Joining Australia in their group is Tunisia. The Eagles of Carthage keep their place at number 28 following a solid showing in recent games. They won three of their four games over the most recent international break, beating Chile and Japan in the Kirin Cup.

Cameroon were only in action once over the last two weeks, facing 139th-ranked Burundi. A 1-0 win does little to inspire much confidence in the Indomitable Lions.

Morocco have won their last two games, beating South Africa and Liberia. However, the most challenging of their recent fixtures came against USA, where they were beaten 3-0. As a result, they tumble down the rankings.

Ecuador suffered a slight scare recently, having faced allegations that one of their players was ineligible. The case threatened their place at the tournament entirely, but it appears to have come to nothing.

USA keep their place at number 24, having enjoyed some positive results lately. They battered Morocco and Grenada, and held Uruguay to a draw. However, a draw against El Salvador wouldn’t have been particularly welcome.

The final team to confirm their place at the tournament was Costa Rica. They qualified for their third consecutive World Cup – and their fifth in six – having beaten New Zealand in their play-off match.

They enter the competition in fine form. From their last ten outings, Los Ticos have won eight and lost just once, keeping seven clean sheets along the way. They will need to maintain this level to stand any chance of reaching the knockout stages, as they were drawn in the same group as Spain and Germany.

After a 64-year wait, Wales are finally back on the world stage. They defeated Austria and Ukraine in their play-off to qualify for the tournament.

It’s no secret who the main man for the Dragons is. Gareth Bale remains the superstar in this Welsh squad. There have been rumours that he will retire in the near future. If he could sign off with an impressive showing at the World Cup, it would be the perfect way to go.

Having not kicked a ball since our last ranking, there’s no reason to move Qatar up. In fact, they have no fixtures scheduled before their first game at the tournament. The lack of practice could prove costly.

Nonetheless, as hosts, they remain at an advantage.

Looking back on our previous ranking, perhaps we were a bit harsh on Iran. There will be few nations who enter the World Cup in better form than Dragan Skocic’s side – from their last 18 outings, they have picked up 15 wins, scoring 40 and conceding just eight.

Moving down into 19th place is Mexico after a difficult run of results. El Tri were comprehensively beaten by Uruguay, and followed this up with unconvincing draws against Ecuador and Jamaica. A 3-0 win against Suriname was the only positive of the last fortnight.

Poland fall down one place, having struggled in their UEFA Nations League fixtures. They defeated Wales in their opener, but accompanied this with a 6-1 humiliation against Belgium. One point from the next two matches against Netherlands and Belgium was a slight improvement, but still not particularly encouraging.

Despite this, if they can get the best out of Robert Lewandowski, they should have enough to reach the knockout stages.

The last week has been mixed for Canada, kicking off with a 4-0 win over Curacao. While the scoreline may have been emphatic, it’s a fixture that you’d expect them to win. After this, they faced Honduras and suffered a surprise defeat. As a result, we’ve moved them down to 17th.

After losing 5-1 to Brazil, South Korea seemed likely to fall down the rankings. However, they bounced back in fine fashion, picking up wins against Chile and Egypt. They move into the top half.

Serbia have a number of players in their squad who are capable of doing damage to any side. In recent weeks, they’ve shown flashes of their best stuff, demolishing Slovenia and beating Sweden.

In contrast, they also fell to defeat at home to Norway, leaving them second in their Nations League group. We’ve decided to keep them in 15th place.

Switzerland have proven themselves to be capable of an upset over the last year. They reminded us of this when they beat Portugal 1-0 last time out.

However, this came after three consecutive defeats, losing to Czech Republic, Portugal and Spain. As things stand, they are on course for relegation in the Nations League.

Over the international break, Senegal recorded wins against Benin and Rwanda. This, coupled with Switzerland’s struggles, is enough to move the Africa Cup of Nations champions up one spot. They remain the highest-ranked non-European/South American team.

It’s been a mostly positive set of fixtures for Croatia. They sit second in their Nations League group, taking four points off holders France. However, a 3-0 defeat to Austria puts a stain on their record.

It’s difficult to separate Croatia and Denmark. They’ve both got several players who can make an impact, especially in midfield. Additionally, both have enjoyed relative success in recent years.

We’ve placed Kasper Hjulmand’s side the higher of the pair, as they currently top the Nations League group. However, when the two met last week, Croatia came out on top.

Going into the World Cup, Uruguay are in flying form. In 2022, they have won six of their seven matches, scoring 16 and conceding just once. If they can take this momentum into the tournament, they will be ones to watch.

Not many people know what to expect from Belgium. They’ve been among the highest ranked teams in the world for a few years now, but haven’t got a whole lot to back it up with.

Recent results have been hit and miss. They tore Poland apart 6-1 at home, and also beat them in the reverse fixture. On the other hand, they were unable to beat Wales, and suffered a humiliating 4-1 home defeat at the hands of Netherlands.

Out of the main contenders for the World Cup, there isn’t one who had a worse international break than England.

The Three Lions began with a 1-0 defeat against Hungary. Their following two outings were a slight improvement, drawing against Germany and Italy. But they were soon humbled once more, losing 4-0 at home to Hungary. This has killed a lot of the optimism going into the tournament.

It was a varied set of results during the international break for Portugal. Comfortable wins against Switzerland and Czech Republic bode well, and a draw away to Spain is also a positive. However, they lost their last outing against Switzerland, which will have come as a disappointment.

There is little incentive to move Portugal up or down. They stay in seventh.

As things stand, Netherlands are set to top their Nations League group. They’ve picked up ten points from their last four outings, beating Belgium 4-1 in the process.

Although, there was an element of luck to the other three results. In both clashes with Wales, they relied on an injury-time winner, and they were held to a draw by Poland. Nonetheless, they’re in a good position.

Spain are another who had an unspectacular international break. Their Nations League campaign began with draws against Portugal and Czech Republic, but back-to-back wins in their next two outings propelled them to the top of their group. La Furia Roja remain in fifth place.

Hansi Flick’s men ended the latest round of fixtures on a perfect note, destroying European champions Italy 5-2. This was a welcome result, off the back of four successive draws. Germany are still looking like one of the favourites to lift the trophy.

In our previous ranking, we had France at the number one spot. They’re still among the strongest sides at the World Cup, boasting world-class talent all over the pitch.

Les Bleus move down to third after a disastrous run of results. They fell to defeat against Denmark and Croatia at home, and were unable to take three points from their away clashes with Austria and Croatia. They’re now on the verge of relegation in the Nations League.

Many bookies have Brazil as favourites to take the throne, and their recent results have done plenty to back this up. They won 5-1 in a friendly against South Korea, and followed this up with a win against Japan.

Star man Neymar is just four goals away from becoming Brazil’s all-time top goalscorer, an accolade currently held by the great Pele. He would love to break that record during the tournament.

Moving up into first place is Argentina. La Albiceleste got their hands on their first piece of silverware for 28 years last summer, and have only improved since.

Their last defeat was almost three years ago in the 2019 Copa America semi-final. Since then, they have gone 33 games unbeaten, winning 22 – if the can go without defeat in their next five outings, they will break the record for the longest unbeaten streak in the history of international football.

Argentina have made a real statement over the international break. They dominated Italy at Wembley and came out 3-0 winners, then defeated Estonia 5-0 with Lionel Messi scoring all five. It seems to all be clicking into place at the right time for Lionel Scaloni’s side.