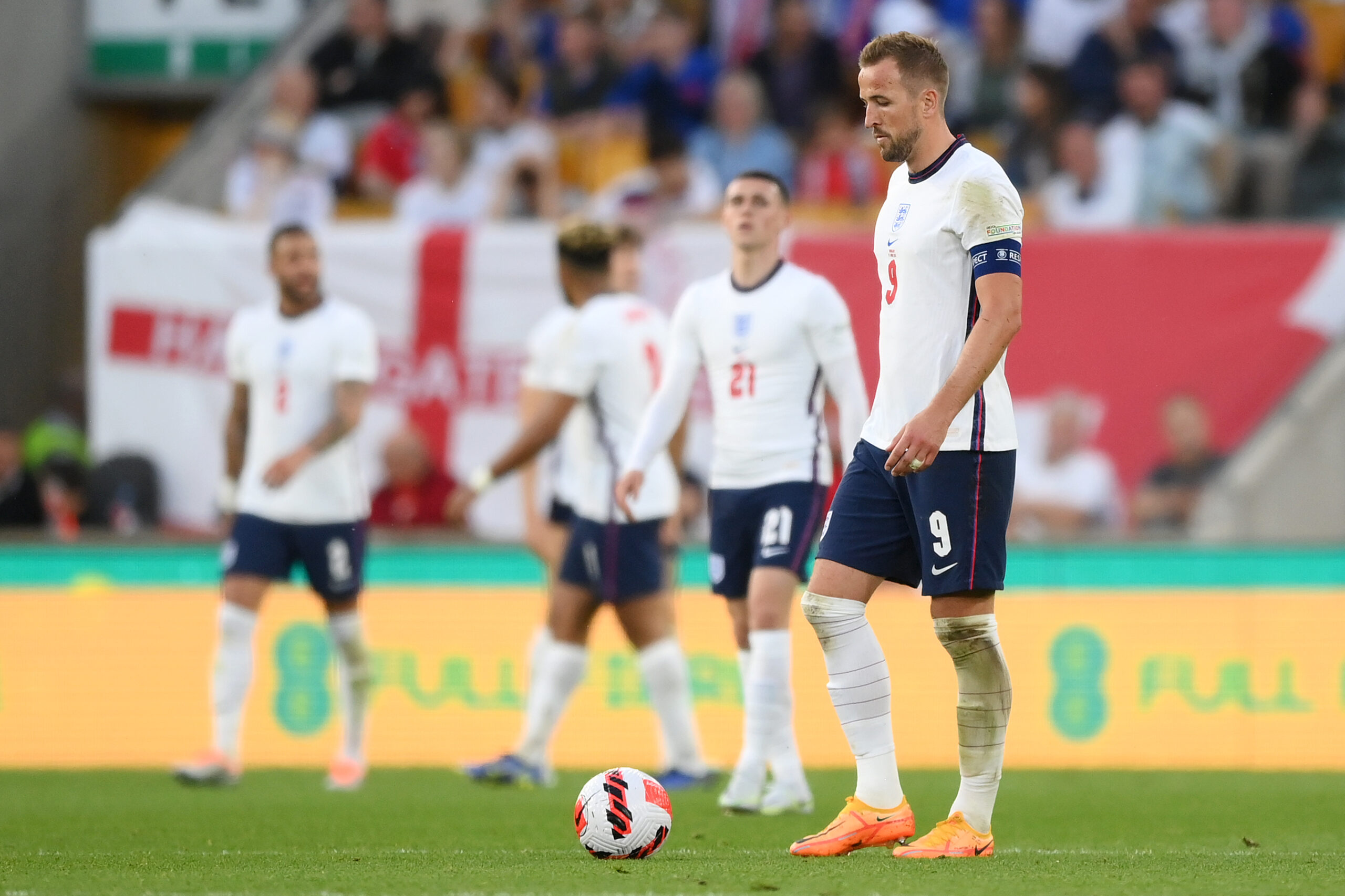 It was an embarrassing night for the England national team, as their horror Nations League campaign continued with a 4-0 home defeat to Hungary.

The Magyars got the ball rolling in the 15th minute when Roland Sallai fired in at the near post following some poor defending from a set piece. This was the only action of note in the first half.

The hosts put on some pressure for an equaliser, but were unable to create anything meaningful up against a stern defence. Then in the 70th minute, Sallai struck again to double his side’s advantage.

Going into the closing stages, things got much, much worse for Gareth Southgate’s men. First, Zsolt Nagy struck a fine third, shortly before John Stones was given a second yellow card. And in the dying seconds, Daniel Gazdag clipped the ball over Aaron Ramsdale to make it four.

It was an evening of few positives for England, who remain without a win in their four Nations League fixtures. They sit three points adrift at the bottom of their group with only two matches remaining. Relegation is looking increasingly likely at this point.

As for Hungary, it was a memorable night for them, and one of their finest results in the modern era. The victory takes them to the top of the group, one point ahead of Germany in second.

Here are four talking points from the match.

A feature of England’s play throughout Euro 2020 was their defensive solidity, conceding just twice all tournament. It was a complete contrast on Tuesday night.

There wasn’t a single defender who shouldn’t be ashamed of their performance. Frankly, it was a mess at the back, with at least three of the goals attributed to poor defending.

If there is one positive that Gareth Southgate can take from this match, it’s this: he no longer needs to think about who his number one goalkeeper will be at the World Cup. Aaron Ramsdale has effectively handed the gloves to Jordan Pickford following a disastrous game.

But Ramsdale was far from the only one. John Stones – a man widely considered to be England’s best centre-back – was bullied by Sallai all evening before his rather harsh red card. Kyle Walker also got caught out for the fourth goal.

A lot is made of England’s squad, with many believing that their selection is as strong as anyone’s. Hopefully this myth is put to bed soon. Don’t get us wrong, there is talent at their disposal, but it’s almost all in attacking areas. Personnel-wise, their options at the back are bang average.

If there’s one England player who can walk away with his head held high after this match, it’s Declan Rice. Why? Because he didn’t feature, and they looked lost without him.

The West Ham United man was 50% of a formidable duo at the European Championships alongside Kalvin Phillips. On Tuesday, the 26-year-old looked well off it without his midfield partner, and was largely responsible for Hungary’s second goal.

Meanwhile, Jude Bellingham wasn’t much better. Many have been crying out for the teenager to start, but displays like this don’t bode well for his chances at the World Cup.

Rice started the previous three games, and England weren’t particularly convincing in them either. However, it was never this poor. If he hadn’t already, he’s just cemented himself in the starting XI in Qatar.

As we said earlier, most of England’s talent lies in attack. Yet, if you watched their last four matches, you’d be forgiven for thinking they’d been called up from non-league.

Harry Kane, Raheem Sterling, Bukayo Saka, Phil Foden, Jack Grealish, Mason Mount, Tammy Abraham, Jarrod Bowen. There are players here who can do some serious damage to any side. And what have we seen so far? One goal in four outings, with that goal coming from a rather fortunate penalty.

Against Hungary, the Three Lions got into some decent areas, but the end product wasn’t there. Kane had a header that hit the crossbar, but there was very little else to report.

One has to wonder: how on Earth does a team with so much attacking talent look so blunt?

Public opinion of Gareth Southgate has been deeply divided since he was given the job six years ago. Statistically, he is England’s second-best manager ever behind Alf Ramsey, but many believe that he should have delivered some silverware.

Now, his critics are as loud as ever. This result stands out as the lowest point in Southgate’s time in charge of the national team. Even his most loyal supporters are struggling to defend him on this one, while the doubters are screaming for him to be replaced.

There are only two games between now and the World Cup. It would be silly to bring in a new manager and give them only two matches to prepare for a major tournament. Southgate isn’t getting sacked – forget it, it won’t happen.

The upcoming tournament could be make or break for the former Middlesbrough man. England will be expected to compete, but there is also potential for humiliation.

In the group stages, the one-time world champions will face Iran, USA, and Wales. On paper, they should finish top. However, their recent performances haven’t inspired much confidence.

With belief in Southgate at an all-time low, he will need to deliver a strong challenge for the trophy at the very least if he wants to get the fans back on his side. On the other hand, an early exit could signal a point of no return.