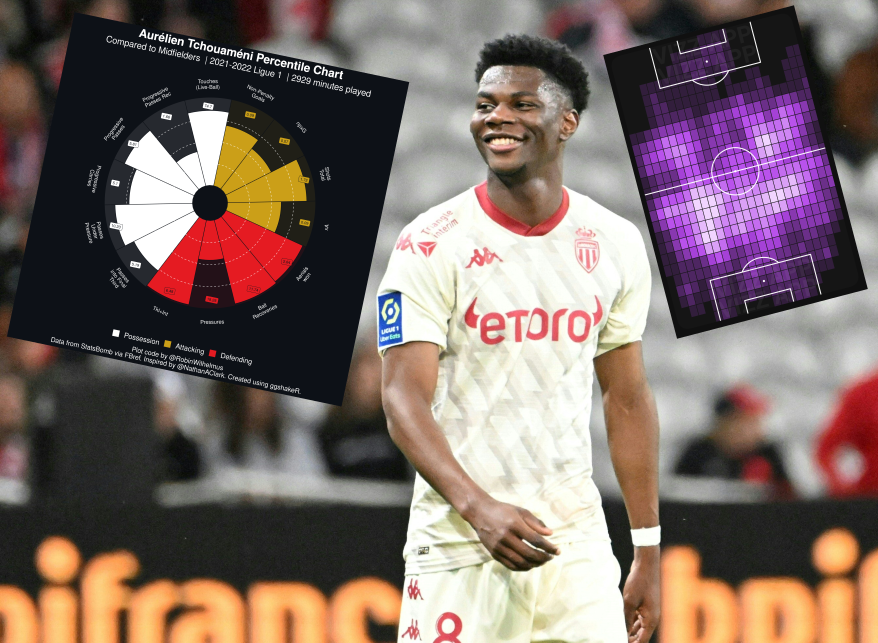 If you are not aboard the Aurélien Tchouaméni hype train yet, this really is the last call. The 22-year-old Frenchman seems set to leave Ligue 1 this summer, with Real Madrid looking most likely to be his next destination.

Such a big move has been coming for Tchouaméni, who has spent the last two seasons as a lynchpin in midfield for a Monaco side that qualified for the Champions League on both occasions. Prior to joining the club in 2020, the Frenchman had spent a couple of seasons playing for Bordeaux, the club where he spent most of his youth career.

Monaco paid €18 million to lure him away from Bordeaux, and in just over two years, they look set to make a massive profit as they will reportedly receive around five times that figure this summer. Such a high transfer fee naturally means that there will be a lot of expectations for the player, but Tchouaméni certainly has the potential to live up to them.

To begin understanding his strengths, we must first familiarise ourselves with his positional profile.

Monaco have played a variety of different formation this season, but most of them, such as their 4-2-3-1, 4-4-2 and 3-4-3 shapes have involved a midfield duo. In these systems, Tchouaméni was primarily used on the left of midfield. Occasionally, new manager Philippe Clement used a 4-1-4-1 formation, and in such cases, Tchouaméni was mostly used as the lone defensive midfielder.

In those two-man midfield, Tchouaméni was usually partnered by Youssouf Fofana, who was usually given a more advanced role while the ex-Bordeaux man remained alone in defensive midfield in possession. This is clear in their average positions from the season.

This explains why his heatmap from the season only shows a very slight left-side bias.

Tchouaméni is an all-action midfielder, and his pizza chart depicts just that.

The 22-year-old Frenchman’s greatest strength is his defensive ability and work rate. He has a great positional sense and reading of the game, which enabled him to make the most interceptions in Ligue 1 last season with 114. He is quite tenacious too, as his 142 tackles were the second-highest number in the league last season. Additionally, he is exceptionally strong in the air, winning well over 70% of such duels.

His defensive actions heatmap sums up his game — he is everywhere.

Tchouaméni is also very good on the ball, as he is great at progressing it and fairly secure in possession too. For a player who averages over 10 attempted long balls per 90 and a similar number of passes under pressure, his pass completion rate of 86.5% is not bad at all.

Since he is right-footed, most of Tchouaméni’s progressive passing ends up on the left side of the pitch. Monaco’s tactical set-up is also a reason behind this trend, as their left-back (usually Caio Henrique) was afforded a lot of freedom to get forward, while the left winger (Sofiane Diop) often dropped deep to receive passes in the half-space.

The ex-Bordeaux man is great at carrying the ball too and does so quite frequently, averaging over 50 carries per 90 in Ligue 1 last season. For a defensive midfielder, his average of 1.35 dribbles per 90 is pretty high, but he usually gets past his man as he has a success rate of 75%.

The Frenchman’s progressive carrying is primarily focused at picking the ball in a deep or wide area and then bringing it to the centre of the pitch, after which he can assess his options and usually try to pick out a pass.

One minor flaw in Tchouaméni’s game is that he can be too trigger-happy when he gets a sight of the goal at times. He has averaged 1.5 shots per 90 in his league career and attempted over 130 shots altogether, but only returned with five goals.

Looking at his shotmap in his Ligue 1 career and the sheer volume of shots from long range, it is easy to see why that is the case.

This is only a minor negative which can easily be ironed out, but on the whole, Tchouaméni is an exceptionally well-rounded midfielder even at such a young age. The French international’s ball-winning ability and off-ball work rate make him an outstanding defensive midfielder and should translate really well to a possession-dominant side, earning him a key role in the side. Additionally, his ball progression ability and role in possession at Monaco mean that he will not look out of place in a side that likes to keep the ball.

Therefore, it would not be a stretch to say that Tchouaméni is quite close to a finished article at just 22 years of age. What is even more encouraging is that he has put in such performances for one of the top sides in a top-five European league, so he is proven at a fairly high level.

A move to a truly elite club like Real Madrid seems the natural next step for him, and all signs are that this signing will be a great success for them. Tchouaméni has all the qualities needed to be a long-term replacement for Casemiro in Los Blancos‘ defensive midfield position, but the Frenchman’s versatility means that the two can coexist in the meantime too.

Get on board, because the Tchouaméni hype train will be leaving the station very soon.