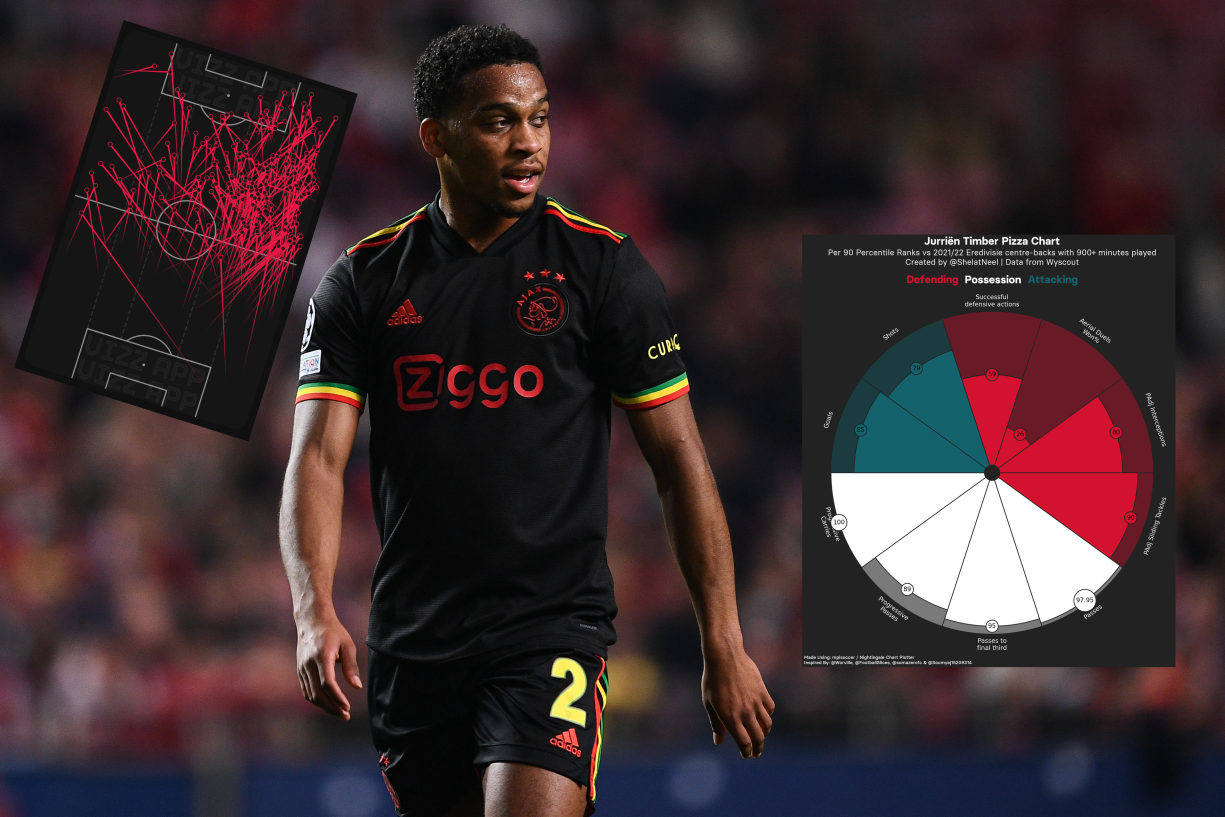 After 2019 and 2020, the summer of 2022 looks set to be another where Ajax will have a bit of a squad overhaul, as a lot of their key players from the most recent title-winning season look set to depart. One of those players is Jurriën Timber, who is being heavily linked with a move to Manchester United.

Having moved from the youth academy of Feyenoord to Ajax at 13 years of age, Timber progressed through the ranks at De Toekomst and made his senior debut less than six years later in March 2020, just before the Eredivisie was abandoned due to the COVID-19 pandemic.

The Dutchman played a greater role in the following season as he started just under half of Ajax’s league matches, and he further established himself as a key starter in the 2021/22 campaign as he spent over 2,500 minutes on the pitch in the Dutch top flight.

The 20-year-old defender has primarily played on the right of a centre-back partnership, although he is also adept at operating as a right-back.

He has spent the overwhelming majority of the 2021/22 season as a right-sided centre-back as is evidenced by his heatmap for the season, so that is what we will be focusing on in this piece.

Looking at his pizza chart from the season, it becomes clear that Timber’s greatest strength is his ball progression, as he excels in that regard both through passing and carrying.

It is important to note that while Timber has played in a back-four on paper, his work in possession is more on the right of a three-man back line, as Erik ten Hag asked one of his defensive midfielders to drop deep and split the centre-backs in possession.

This set-up obviously helps Timber flourish in possession, as does the fact that Ajax’s defined tactical approach means that there are clear patterns of play that develop in almost every game. Therefore, Timber’s progressive passing and carrying are clustered in one region (the right half-space).

Take nothing away from the quality that Timber has on the ball, though, because a tactical set-up can only be as good as the players that operate in it, so the Dutch defender’s ball progression ability has been a huge asset in Ajax’s title-winning season.

The one major weakness in Timber’s game is that he is not great at aerial duels. A success rate of just over 50% is not great for a centre-back, and his relatively short height of under 6′ certainly is a factor in this. This could be further highlighted if the 20-year-old defender makes a step up to a more physically demanding league in the summer.

That is not to say that Timber is a bad defender, though. His average of 4.4 tackles and interceptions per 90 in the Eredivisie last season is quite high, although once again his team’s playing style is a factor in this. Under Ten Hag, Ajax liked to press high up the pitch and counterpress after losing the ball, so their defenders were often required to win one-on-one duels.

This is evident in Timber’s tackling heatmap, which shows a noteworthy cluster in the opposition half. The other major cluster out on the wing shows that a good number of the Dutch international’s tackles were made when he was deployed as a right-back.

Overall, Timber is a pretty solid defender except when it comes to aerial duels, but he makes up for it with his superb ball progression ability.

As far as a potential transfer is concerned, it is clear that Timber would be best suited as a centre-back in a side that likes to dominate possession and press high up the pitch, but his skill set is diverse enough for him to do a job as an auxiliary right-back in a system that can utilise his ball progression ability and does not require him to make overlapping runs and deliver crosses.

A move to Manchester United naturally makes sense as that would allow Timber to continue working with Ten Hag, but there also is a possibility of him staying at Ajax, which would not be a bad option as he could continue developing in a familiar environment.