Grading Real Madrid: How did the players, manager, transfers & results stack up? 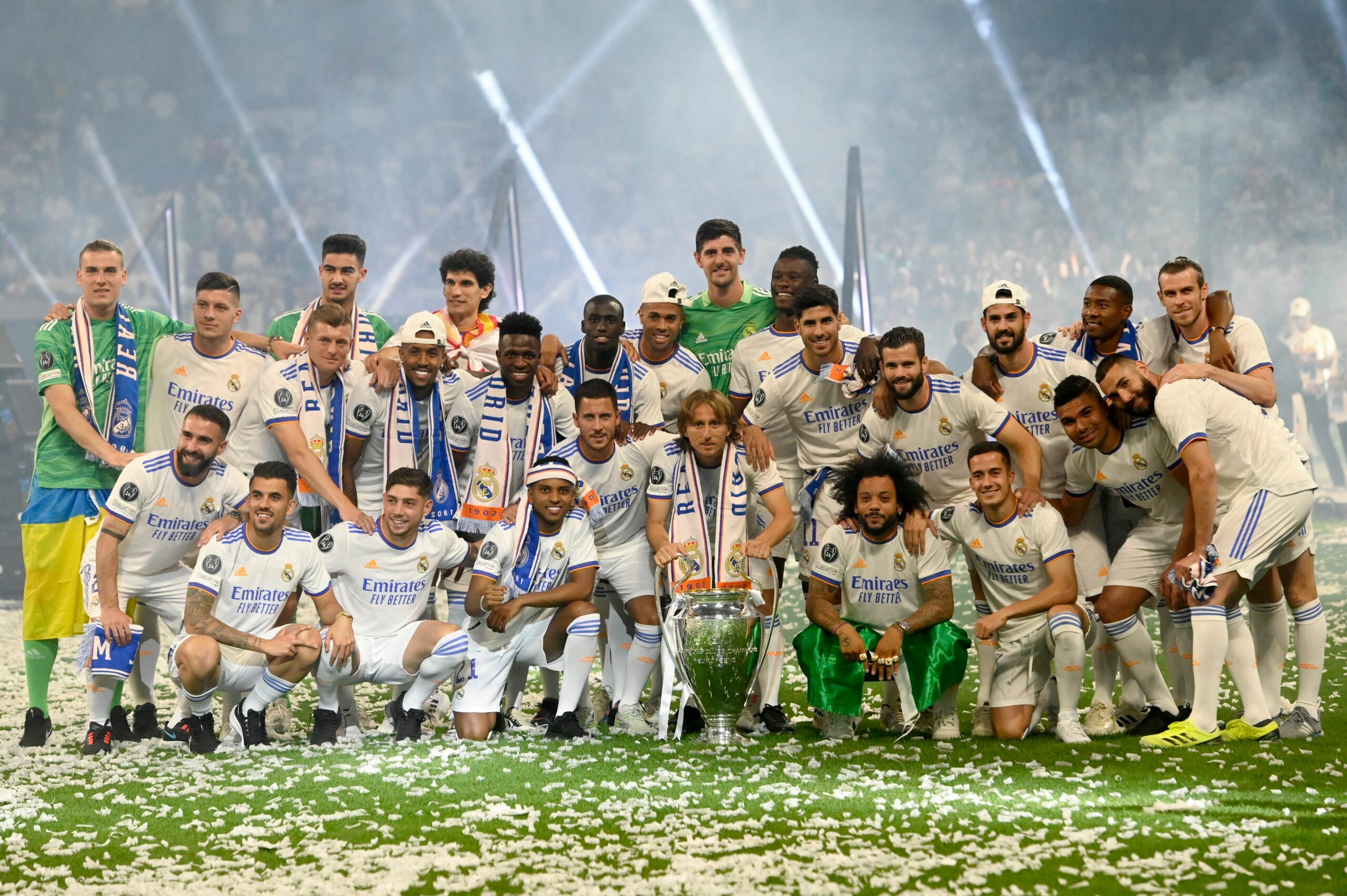 Real Madrid went into the 2021/22 season with a point to prove after ending the previous campaign empty-handed.

They did that in style, romping to an easy success in La Liga before defeating Liverpool to clinch the Champions League title. Here are our grades for Madrid’s season.

Having been linked with most of the top players in Europe last summer, the transfer window was ultimately a quiet one for Madrid.

David Alaba arrived on a free transfer from Bayern Munich, while Eduardo Camavinga was signed for around £28 million from Rennes.

While both players made significant contributions during the campaign, their efforts were overshadowed by Karim Benzema’s goalscoring exploits.

The Frenchman bagged 44 goals in 46 appearances to convince the last remaining doubters about his attacking prowess.

Vinicius Junior was another standout performer, netting 22 goals and 20 assists in 52 appearances during a breakout season.

With 14 players making 40 or more appearances last season, Madrid’s success was built on a solid foundation of consistency.

After underwhelming spells at Napoli and Everton, plenty of eyebrows were raised when Ancelotti returned to Madrid for his second spell in charge.

Ancelotti was supremely confident in his ability to win trophies and duly delivered by guiding Madrid to success in La Liga and the Champions League.

While they were helped by Barcelona’s struggles at the start of the season, they were far and away the best team in the Spanish top-flight.

However, where Ancelotti shone was in the Champions League, particularly during the knockout phase.

Madrid beat Paris Saint-Germain, Chelsea and Manchester City on their way to the final, highlighting Ancelotti’s ability to get the best out of his players.

He produced a tactical masterclass against Liverpool in the final, making a mockery of claims that Jurgen Klopp is the best manager in the world.

Having sung Madrid’s praises thus far, it is worth noting that they had a handful of disappointing results during the campaign.

They included a 4-0 home defeat against Barcelona during March and a 1-0 reverse at Atletico Madrid in early May.

Madrid were also knocked out of the Cop del Rey quarter-finals by Athletic Bilbao, demonstrating that the season wasn’t quite perfect.

However, winning the league title by a whopping 13-point margin from Barcelona highlights Madrid’s overall dominance.

Beating PSG, Chelsea and Man City in the Champions League was also a superb achievement, setting up that showdown with Liverpool.

While some misguided pundits argued that the best team lost in the final, that’s not what it says on the Champions League winners list.

Alaba was a star performer for Madrid throughout the season, playing a pivotal role as Madrid conceded less than a goal per game in La Liga.

Camavinga also produced some impressive performances, especially during the knockout phase of the Champions League.

Madrid’s crucial second legs against PSG, Chelsea and Man City all turned back in Madrid’s favour following Camavinga’s introduction off the bench.

The decision to allow Raphael Varane and Sergio Ramos to leave also paid dividends, with neither player producing their best for Manchester United and PSG.

While several other top clubs were frittering money away last summer, Madrid got their transfer business spot on.

Madrid fans expect to be in contention for every trophy, so they will unquestionably regard last season as a hugely successful one.

It could be argued that Madrid overachieved, as they were largely written off as potential Champions League winners before the group stage.

Their La Liga success was not unexpected, although they probably could not have imagined how far Barcelona would fall after Lionel Messi’s departure.

Having said that, Barca did recover after appointing Xavi as their new manager last November and can be expected to mount a more robust challenge next time around.

Their thumping victory at the Bernabeu Stadium was a shot across Madrid’s bows and demonstrated that Los Blancos would be well-advised not to rest on their laurels.

While Madrid can reflect on a job well done, they will head into the next campaign with a big target on their back.

With two major trophies to show for their efforts, the 2021/22 season has been a spectacular one for Madrid.

The decision to appoint Ancelotti ultimately proved to be inspired, with the Italian proving that he is one of the best managers of all time.

Winning the Copa del Rey would have been the cherry on the cake, but only the greediest of fans will be niggled by that failure.

Madrid are unlikely to stand still this summer, particularly with some long-serving squad members heading for the exit door.

Gareth Bale, Isco and Marcelo have confirmed they are leaving Madrid, and other fringe players may also be on their way out.

Madrid’s hopes of adding Paris Saint-Germain forward Kylian Mbappe to their ranks have fallen through, but that is not necessarily a bad thing.

Benzema and Vinicius Jr have forged an excellent understanding over the past year, and Mbappe’s arrival could have derailed that partnership.

Midfielder Aurelien Tchouameni has been heavily linked with Madrid, although Monaco’s excessive demands may scupper that deal.

Ancelotti reportedly wants to add a left-back, midfielder and striker to his squad, but it would be no surprise to see the club take a prudent approach to their transfer business this summer.