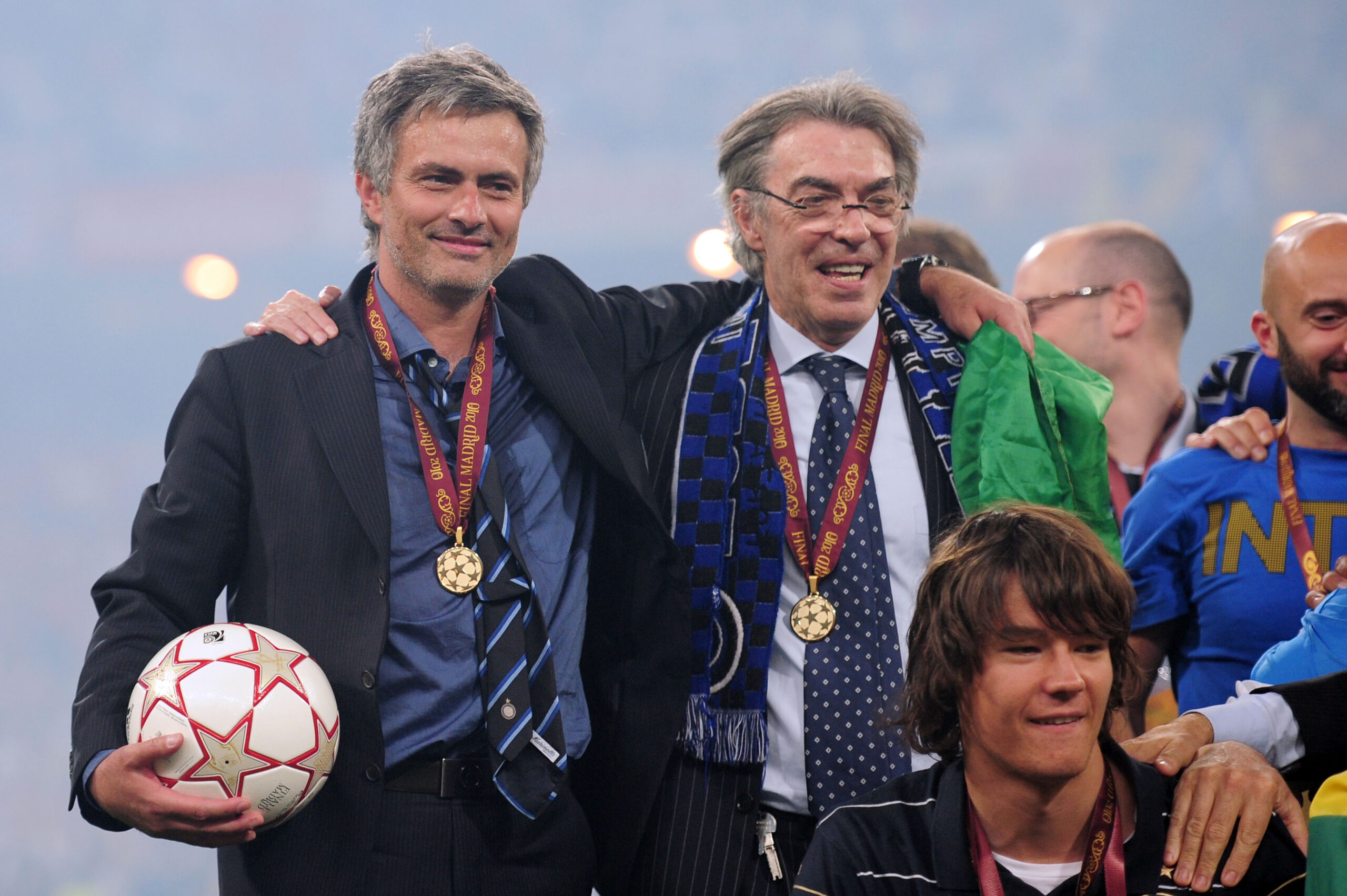 Jose Mourinho is a character who divides opinions among football fans.

Lauded for his trophy cabinet; criticised for his style of play. Celebrated for his witty one-liners; despised for his arrogance. Whatever you think of him, he is the headline act wherever he goes.

On Wednesday evening, he added another medal to his fine collection, guiding his Roma side to Europa Conference League glory. In doing do, he became the first manager to win all three major European trophies.

Here is how we rank his five continental successes.

We’ve opted for his most recent success as the least impressive of the five. Without trying to downplay the achievement, it’s….only the Europa Conference League.

On their path to the trophy, the Giallorossi faced CSKA Sofia, Zorya Luhansk, and Bodo/Glimt in the group stages. In the knockouts, they clashed with Vitesse, Bodo/Glimt again, and Leicester City, before a final against Feyenoord.

Look, you can only beat what’s in front of you, but were Roma ever the underdogs? In all of these ties, they were heavily fancied to progress.

Nonetheless, they still had to get the job done, which they did thanks to Nicolo Zaniolo’s strike in Tirana on Wednesday.

As the years go by, Mourinho’s time at Manchester United seems to be looked back on with more fondness. It’s been five years since his European triumph in Stockholm, and the Red Devils are yet to win another trophy since.

Much like Roma, Man Utd never had a tie they weren’t heavy favourites for. But again, you can only beat what’s in front of you.

In the group stages, they came up against Feyenoord, Zorya Luhansk, and Fenerbahce, finishing second behind the Turkish side. After this came a comfortable round of 32 tie against Saint-Etienne, which they won 4-0 on aggregate.

The next three rounds weren’t so cosy, getting past Rostov, Anderlecht, and Celta Vigo by just one goal. But they made no mistake in the final, defeating Ajax 2-0 with goals from Paul Pogba and Henrikh Mkhitaryan.

Back when he was somewhat unknown in the wider world of football, Mourinho showed his first signs of greatness during his debut season in charge of Porto. He won the league with a then-record 86 points, and lifted the Taca de Portugal after beating former club Uniao de Leiria in the final.

And it wasn’t just domestically where he made an impact, as his side also got their hands on the UEFA Cup. They saw off Polonia Warsaw, Austria Wien, Lens, Denizlispor, Panathinaikos, Lazio, and Celtic to secure European glory.

Not only did the winning impress, but also the manner in which they did it. Aside from the ties with Panathinaikos and Celtic – both of which went to extra time – the Dragons went through every round with relative ease. In fact, they were behind for only 37 minutes throughout the entire competition.

Now onto the big one. The Champions League. For many clubs, this is the holy grail of football. One year on from their UEFA Cup success, Mourinho’s men went one step further and conquered Europe’s biggest club competition.

It began in the group stages, where they were drawn up against Real Madrid, Marseille, and Partizan Belgrade. They finished as runners up, picking up 11 points from their six matches.

In the round of 16, Porto faced English champions Man Utd. A Benni McCarthy brace gave them a 2-1 lead heading to Old Trafford, but they seemed to be on the verge of exiting when Paul Scholes put the Red Devils in front. That was until the 90th minute, when Costinha struck to put the Portuguese side back ahead on aggregate, sparking an iconic Mourinho touchline dash.

This was the biggest hurdle that Porto faced throughout the competition. They went on to eliminate Lyon and Deportivo La Coruna to set up a final with Monaco.

They went ahead in the 39th minute with a goal with a beautiful volley from Carlos Alberto (no, not that one). In the final 20 minutes, Deco grabbed a second, and an emphatic finish from Dmitri Alenichev put the game beyond all doubt.

If there were any doubts over Mourinho’s status as one of the greats, they were completely eliminated by his second season at Inter Milan. In the 2009/10 campaign, the Nerazzurri became the first ever Italian side to win the treble.

Their European adventure didn’t get off to the best of starts, and they found themselves in a bit of trouble going into their final group stage match. Having won just one of their first five outings, they needed a win against Rubin Kazan to progress to the knockouts. They pulled this off without too many problems, defeating the Russian club 2-0 thanks to goals by Samuel Eto’o and Mario Balotelli.

Their next task came against Chelsea – who would go on to win the Premier League later that year. This wasn’t too much of an issue for Inter, who advanced 3-1 on aggregate with goals from Diego Milito, Esteban Cambiasso, and Eto’o.

Up next was CSKA Moscow, and it was a relatively comfortable one. They won both legs 1-0, with Milito netting in the first leg and Wesley Sneijder scoring an early goal in the second.

Inter’s semi-final tie was to be possibly the biggest test Mourinho has ever faced. They clashed with Pep Guardiola’s Barcelona – a team regarded by many as the greatest club side of all time. And that mountain got even steeper when Pedro gave the visitors the lead in the 19th minute of the first leg.

But the Italian giants weren’t discouraged by this, and found themselves an equaliser on the half-hour mark when Sneijder converted from Milito’s lay-off. The Argentine got his second assist shortly after half time, picking out Maicon to finish into the far corner.

Milito would get himself on the scoresheet moments later to put Inter two goals ahead. Sneijder’s header found the forward unmarked at the back post, and he nodded in from close range. This was the last goal of the evening, and the Nerazzurri took a 3-1 lead to the Camp Nou.

The second leg was the perfect example of a ‘Mourinho masterclass’. They had 24% possession all night, and went down to ten men in the first half when Thiago Motta was sent off. However, Barcelona were unable to complete the comeback, finding the net only once through Gerard Pique’s late strike.

For the final, Inter Milan travelled to the Bernabeu to face Bayern Munich, and it was a game that belonged to Milito. He was the star of the show, scoring a magnificent brace to wrap up the treble.

The first came before the break, racing through on goal and finishing into the roof of the net. And the second sealed the victory, twisting past Daniel Van Buyten and curling one into the far corner.