Last Week In Football: Drama at the Etihad, Leipzig crush Freiburg’s fairytale, Lyon reinstall themselves as queens of Europe & more 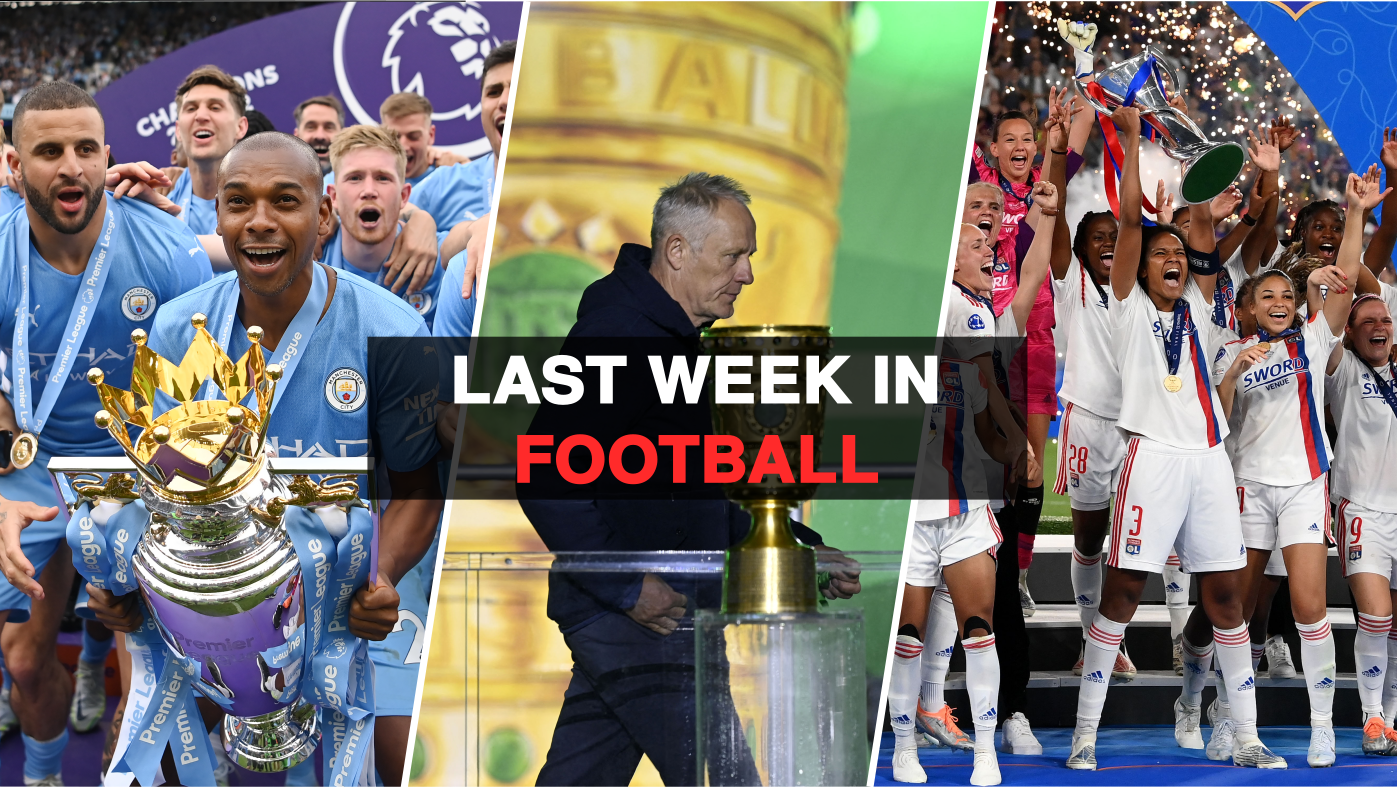 As the majority of leagues across Europe drew their curtains on the 2021/22 season over the weekend, there was lots of final day drama all over the place. Titles were decided in England and Italy, the German Cup final was held in Berlin and the UEFA Women’s Champions League final took place in Turin among other big matches, all of which will be covered in this edition of Last Week In Football:

The Premier League title race went right down to the wire as Manchester City gave their fans a slight taste of 2012 before ultimately keeping the trophy away from Liverpool by coming back from two goals down against Aston Villa.

Liverpool had also gone behind in their match against Wolves, but they equalised quite quickly. They struggled to find a go-ahead goal, though, so by the time Mohamed Salah came off the bench to make it 2-1, Villa had conceded thrice in a five-minute period starting in the final quarter of an hour of the match.

We took a more in-depth look at City’s season in the aftermath of this, which you can read here:

In Italy, Milan just needed one point to lift their first major trophy in 11 years and prevent their local rivals Inter from winning back-to-back league titles, but they did so in style by thrashing Sassuolo and scoring four goals.

Manager Stafano Pioli, who was far from a popular appointment when he arrived on an interim basis initially in 2019, lifted his first major trophy in his managerial career with this success. The season did not get off to a great start for his side, but things eventually began to fall in place as the defence stabilised and the attack began to click at the right times, especially in the title run-iin, so Milan were able to pip Inter to the Scudetto.

This could well be just the start of a great era for Milan, as they have the youngest squad among the title winners in Europe’s top-five leagues this season with an average age of just 25.6 years weighted by minutes played.

In a historic moment in German football, RB Leipzig lifted their first-ever major trophy as they won the DFB-Pokal after faltering in the final on two previous occasions. They beat Freiburg, who still do not have a major piece of silverware in their trophy cabinet, almost 120 years on since the day they were founded.

The reason this is such a big deal in the world of German football is that RB Leipzig, as you might imagine, are a corporate-owned club in a landscape of fan-ownership where every other side follows the 50+1 rule, ensuring that control of the club remains in the hands of their supporters. Freiburg are an extreme example of this because the club is owned entirely by its 35,000 members.

Even if we ignore the backdrop of this ideological clash, the football match itself was quite a spectacle.

Freiburg were the better side in the first half and took the lead too, so they seemed to be in a very comfortable position when Leipzig had a man sent off before the hour-mark. However, they were perhaps guilty of taking their foot off the pedal too much, and Leipzig clawed their way back into the game with a scrappy equaliser in the 76th minute.

Freiburg pushed hard for a winner as we entered extra time thereafter and were denied by the woodwork twice, so they failed to score again and the match went to penalties. Leipzig’s takers were all faultless from the spot, so misses from Freiburg captain Christian Günter and ex-Leipzig man Ermedin Demirović decided the outcome of the match.

Kylian Mbappé celebrated his contract extension at PSG in style by netting a hat-trick against Metz, taking his tally up to 28 goals and 17 assists in 35 Ligue 1 matches this season. As a result, he has finished at the top of both the scoring and the assisting charts in the competition. His underlying numbers look equally impressive too.

More importantly, the result of this match means that Metz have been directly relegated from Ligue 1 as Saint-Étienne’s 1-1 draw away at Nantes gave them a crucial point which puts them above Les Grenats in 16th, meaning that they will now face Auxerre in a two-legged promotion-relegation play-off to decide who will play in the top division of French football next season.

The final relegation spot was up in the air in Spain, with Mallorca occupying it going into the weekend because of their inferior head-to-head record against Cádiz, while Granada were a point above the pair in 16th. The situation was simple for Aitor Karanka’s side — even if they failed to win, they just needed one of the other two to drop points and they would be safe.

Unfortunately for them, Cádiz got the better of Alavés thanks to a goal in the 76th minute, while Mallorca won away at Osasuna by a two-goal margin. Granada had a bunch of chances to grab a crucial winner against Espanyol, with the biggest coming in the 72nd minute when they were awarded a penalty after a handball call by VAR, but it was just not to be.

They will join Levante and Alavés in the second tier next season, but there is no clarity on the sides that will replace them yet as the final matchday of La Liga 2 will be played next weekend.

It was unstoppable force versus immovable object in the UEFA Women’s Champions League final, where defending champions Barcelona, who had stormed to the Primera División title with a perfect record and a goal difference of +148, faced Lyon, who were unbeaten en route to their domestic title with just one draw in 20 games.

Most experts regarded Barcelona as the favourites, but Lyon had history on their side having won seven of the previous ten continental titles prior to this one, a record which earned them the nickname ‘Queens of Europe’. They got off to the perfect start and really took the game to their opponents. with Amadine Henry’s incredible strike in the sixth minute setting the tempo for a first-half performance that was just as defensively disciplined as it was offensively explosive.

Lyon’s direct style of football caused all sorts of problems for a Barcelona defence that was relatively untested for most of the season and looked quite shaky on the night, so the French side stormed to a three-goal lead by the 33rd minute. Barcelona pulled one back in the 41st minute, but they could not trouble the scorekeepers again in the second half, so Lyon lifted the Champions League trophy for a record-extending eighth time.