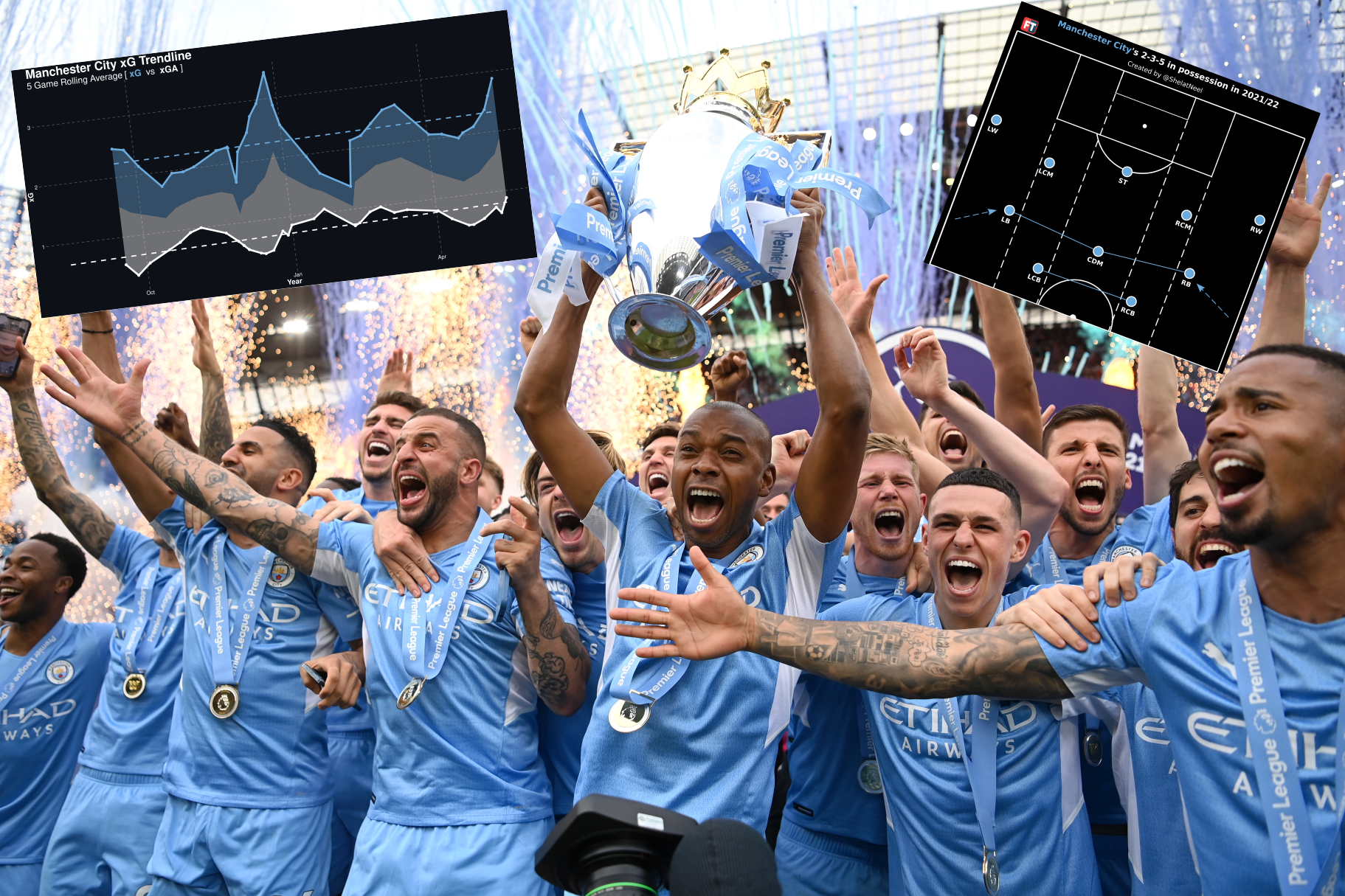 On one of the more dramatic final days of the Premier League, Manchester City lifted their fourth league title in five years after coming back from two goals down against Aston Villa to win 3-2. Liverpool had pushed them all the way till the end, but just like 2018/19, City came out on top by the slenderest of margins.

Initially, it looked like we might have a three-way battle for the title as Chelsea were in the lead early on in the season, but they fell back around December and never looked like keeping step with the top two thereafter.

This was unsurprising to those who were keeping an eye on the underlying numbers because Chelsea were overperforming their xG both in terms of scoring and conceding while Manchester City and Liverpool’s xGD (Expected Goal Difference) was close to two times greater, so Thomas Tuchel’s side was never likely to be in the fight until the end.

At the end of the season, City and Liverpool have finished with the exact same xG tally of 86.1, but for most of the campaign, the Reds boasted of the better attack. Pep Guardiola’s team looked vicious going forward during the Christmas period but fell off quite dramatically in the new year when they dropped a few points to bring Liverpool back into the title race. City’s greatest strength was their solid and stable defence, which somehow got even better after last season.

One of the reasons behind this was the main tactical tweak that Guardiola made over the summer. Last season, his team attacked with a 3-2 structure behind the front three and two attacking midfielders as one of the full-backs stayed deep with the centre-backs, while the other moved inside into midfield.

This season, though, it changed to a 2-3 structure as both full-backs pushed a little bit forward but neither took up an extremely central position.

This was a subtle tweak, but it made a fairly large difference in practice. Firstly, it was easier for the team to collapse into its defensive shape from the 2-3 structure than the 3-2 structure as City use a back-four out of possession, so their ability to contain counterattacks was bolstered. Additionally, in the build-up phase, the usage of a trio to link defence and attack made ball progression easier, while a full-back could always drop back to prevent overloads in the first line if opponents looked to press.

Another thing that changed this season was the heightened attacking fluidity, as Manchester City completely abolished the striker position at times. In certain games, the most central attacker would stay in line with the midfielders while the wingers would be farthest forward, allowing City to dismantle opponents through the middle.

A great example of this was the home game against Brentford, where wingers Riyad Mahrez (26) and Raheem Sterling (7) had the highest average positions while the central attacker Phil Foden (47) was in line with midfielders Kevin De Bruyne (17) and Bernardo Silva (20).

This fluidity also meant that City were not reliant on any specific individuals for their attacking output and their goals came from all over the place. Their top scorer in the league, De Bruyne, is joint-sixth overall in the scoring charts, while his club-high eight assists are only good enough for joint-tenth in the league.

Six players apart from the Belgian international finished the season with double digits in their goal involvements column, showing just how spread the attacking burden was.

That might change a little bit next season, though, because a big-hitter is arriving to lead the line.

Despite this brilliant season in the league, there will be a hint of disappointment still lingering around the Etihad Stadium about Manchester City’s Champions League elimination against Real Madrid. They were the best side in the competition based on their underlying numbers and therefore had a great chance of winning it, but they failed to make it past the semi-final stage in spite of being the better side for about 175 minutes across two legs.

Questions were asked at the time about the squad’s character and resilience, but those are unfair because City showed precisely those qualities when coming back from two goals down on the final matchday to win the league. The beauty of football is that some things just happen even though they defy all logic and reasoning, and that was the story for City against Real Madrid.

Nonetheless, this has been another incredible season for Manchester City as they have further established themselves as one of the best sides in the world right now alongside Liverpool and added another Premier League title to their collection. All indications are that their rivalry of unparalleled consistency and previously unimaginable levels of performance with the Reds will continue next season.