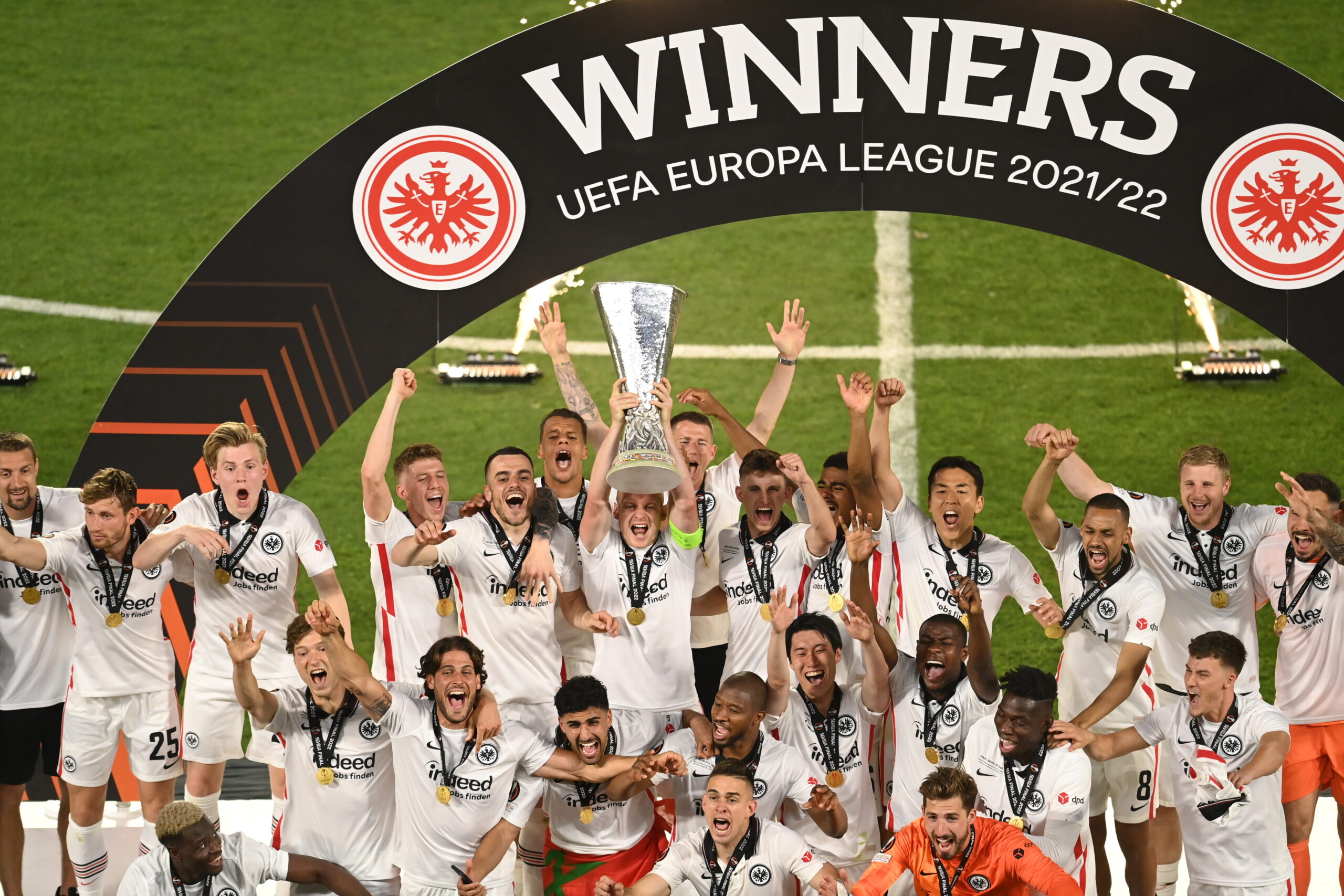 Eintracht Frankfurt got their hands on the Europa League trophy in Seville, defeating Rangers after a penalty shootout.

The Bundesliga club had the better of the early exchanges, and came close to taking the lead in the 20th minute. Ansgar Knauff cut onto his left foot and struck an effort towards the near post, but Allan McGregor was at his best to turn it wide for a corner.

But it wasn’t all going in favour of Frankfurt, with Rangers creating a chance of their own shortly after. Joe Aribo found himself with a bit of space just a few yards outside the box, and he bent his shot just wide of the far corner.

Both sides continued to threaten in the first half, with neither able to break the deadlock. Filip Kostic volleyed over from distance and dragged another shot wide, while John Lundstram had a header turned over the bar by Kevin Trapp.

The second half began in explosive fashion, with both teams threatening. Jesper Lindstrom’s shot deflected inches wide of the post, and Ryan Kent sliced wide from Aribo’s lay-off when well placed.

The scoring was eventually opened early in the second half, and it was the Teddy Bears who got themselves in front. After a stumble from Tuta, Aribo raced through on goal and coolly slotted past Trapp for the first goal of the evening.

Despite the setback, Frankfurt responded well and almost equalised within ten minutes. Conor Goldson’s error allowed Daichi Kamada through, but the forward’s attempted lob ended up on top of the net.

This turned out to be the last major event of the 90 minutes, and the game headed into extra time.

There was plenty to talk about during the extended period. Calvin Bassey made a fantastic recovery tackle after his slip allowed Borre through on goal, and substitutes Ajdin Hrustic and Kristijan Jakic both narrowly missed the target from distance.

Giovanni van Bronckhorst’s men also showed some threat in extra time. Borna Barisic and Kent fired long-range efforts towards goal, but Trapp was equal to them.

In the dying moments, Rangers had a glorious opportunity to nick a winner. Kemar Roofe’s low cross made its way to Kent at the back post, but the Englishman saw his close-range attempt saved by Trapp.

The German had to be at his best again in injury time, keeping out James Tavernier’s free kick. But there were no further goals, taking the Europa League final to a penalty shootout for the second year running.

Tavernier was up first, and he stuck his down the middle. Christopher Lenz followed, slamming his penalty into the top right corner.

Up next was Steven Davis, and he placed his perfectly into the top right. Hrustic was second for Frankfurt, and he also made no mistake by sending McGregor the wrong way.

Each side took their third penalties, and the 100% record continued. Scott Arfield finished into the top left, and Kamada converted in off the post.

But the first eventually came. Aaron Ramsey – who was substituted on in the closing minutes – tried to go down the middle, only to see his penalty blocked by the legs of Trapp. Kostic stepped up next and found the corner.

Roofe was also subbed on late, and he took the fifth for Rangers, knowing that a miss would hand the trophy to their opponents. The former Leeds United man held his nerve, finding the bottom left corner.

Up stepped goalscorer Borre with the opportunity to seal the trophy for his side. The Colombian’s spot-kick was emphatic, firing into the top left corner to spark wild celebrations.

The trophy was the second European honour in Frankfurt’s history, and their first since 1980. As for Rangers, they missed the chance to secure their first continental cup since the European Cup Winners’ Cup in 1972.

Man of the Match – Kevin Trapp

When a match goes to penalties, it’s often one of the goalkeepers who is the hero. Trapp made the crucial save to keep out Ramsey’s penalty, resulting in the only miss of the shootout.

But this was far from his only contribution. The 31-year-old was called upon on several occasions, denying Lundstram, Kent, Barisic and Tavernier.

Right at the death, he was needed to deny Kent what would have surely been the winning goal. His save was the difference between Frankfurt leaving with gold or silver medals.