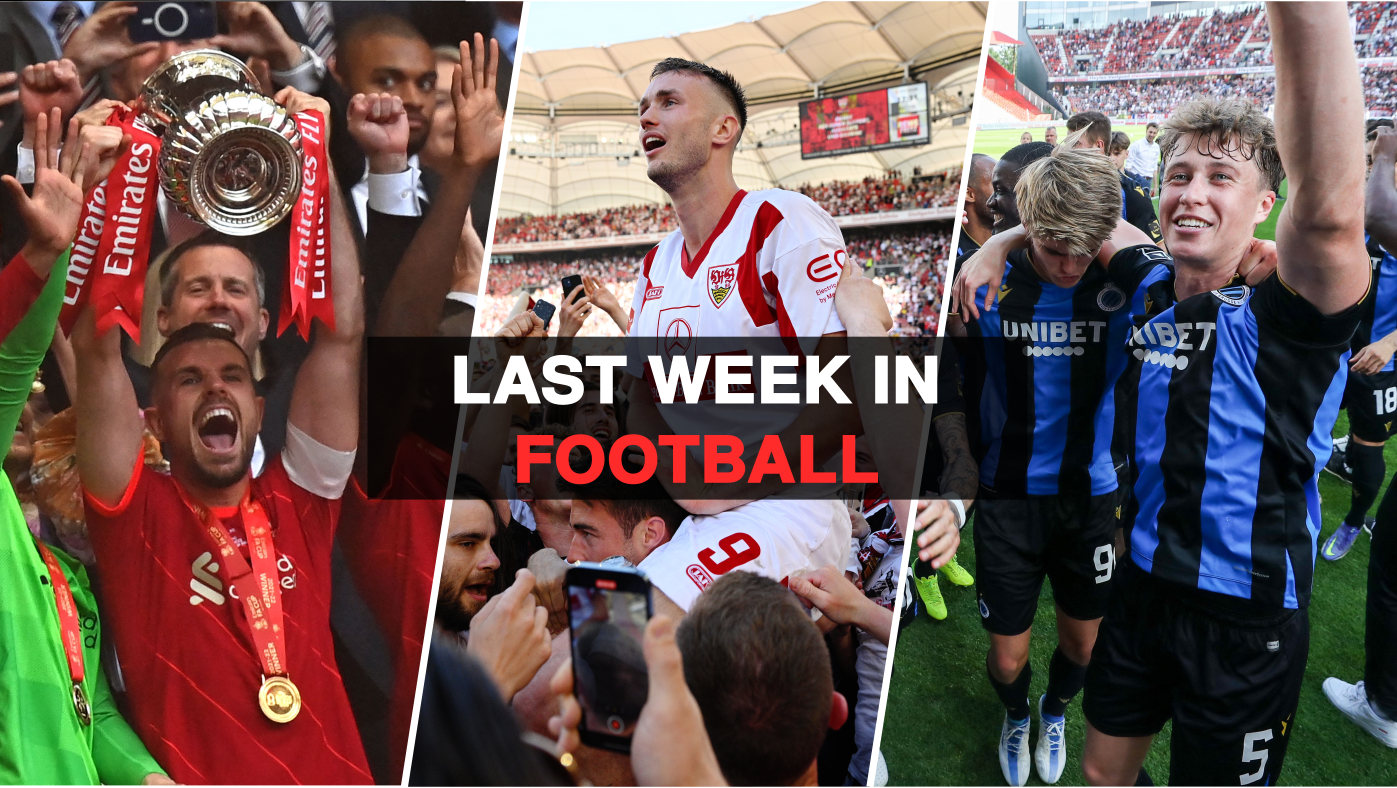 There were yet more trophies being handed out and league titles being decided over the weekend as we approach the end of the regular football season in most parts of Europe, so we have lots to unpack. The penultimate matchday were being played across Europe’s top five leagues except in Germany, where the Bundesliga drew to a close in dramatic fashion. We will cover all that and more below in this edition of Last Week In Football:

In England, the FA Cup final was also played at Wembley, and it featured Chelsea and Liverpool once again. Those watching on their television must have checked that they were not watching a replay of the Carabao Cup final at least once during the match because the game followed an almost identical trajectory.

Both sides had tons of chances in the match and the woodwork was tested time and again, but nobody could put the ball into the back of the net. The game was to be decided on penalties after a rather boring extra time period, and this time Thomas Tuchel did not substitute his keepers for the shoot-out.

That decision did not matter ultimately as Chelsea lost in spite of Eduoard Mendy’s best efforts, with misses from César Azpilicueta and Mason Mount proving costly for the Blues. This meant that Liverpool were able to get their hands on the FA Cup trophy for the first time since 2006.

There was lots of drama at both ends of the table on the final matchday of the Bundesliga, as the race for Europe and relegation battle had not concluded. Down at the bottom, Stuttgart went into their match against Köln in the play-off spot three points behind Hertha Berlin, but they did have goal difference on their side.

Although they got off to a great start by taking the lead within 12 minutes through Saša Kalajdžić, but over in Dortmund, Hertha opened the scoring as well so the table stayed as it was. Köln equalised just before the hour mark, so Stuttgart remained in the play-off spot even after Dortmund turned the match on its head thanks to goals from Erling Haaland and Youssoufa Moukoko.

It appeared that Stuttgart would be left to rue their missed chances as the scores remained level at the end of the 90 minutes, but in the second minute of stoppage time, Wataru Endo poked the ball home after a corner to lift his side to safety.

Naturally, the scenes that ensued at the Mercedes-Benz Arena were incredible.

Below Stuttgart, Hertha will have to face Hamburg in the promotion-relegation play-off, while Arminia Bielefeld and Greuther Fürth have directly gone down and will be replaced by Schalke and Werder Bremen.

Milan effectively put one hand on their first major trophy in over a decade in Italy, as their 2-0 win over Atalanta means that they only need a point against Sassuolo on the final day to seal the Serie A title.

After a tense first half, Rafael Leão provided the breakthrough a few minutes before the hour-mark, after which a spectacular solo strike from Theo Hernández sealed the three points for Milan.

Seeing the former on the scoresheet should be no surprise, as he now has 18 goal involvements in what is his best-ever league season in that regard. The ex-Lille man has come through in the clutch during the last few weeks of the title run-in too, scoring the only goal of the match against Fiorentina and notching up a couple of key assists against Hellas Verona.

Inter did keep the title race alive by winning against Cagliari, but as aforementioned, Milan simply need to avoid defeat on the final day to lift the Scudetto.

There was a major result in the race for Champions League football in France on the penultimate matchday of Ligue 1, as Rennes hosted second-placed Marseille at Roazhon Park.

Bruno Génésio’s side looked to be in control throughout as they coasted home to a 2-0 victory after dealing all the damage in the first half, closing the gap to Marseille down to just three points. Monaco also went two goals to Brest in the first half, but a second-half turnaround saw them win 4-2 and push Marseille out of the runners-up spot by virtue of their superior goal difference.

Third spot in France only sends you to the Champions League qualifiers and Marseille will need to avoid defeat on the final matchday to secure at least that, while a better result than Monaco would see them reclaim direct qualification to Europe’s most elite continental competition.

Real Sociedad completed a crucial comeback away from home against Villarreal, as second-half goals from Alexander Isak and Martin Zubimendi helped them seal sixth place in the table, and with it, Europa League football next season.

As it stands, Villarreal will also play European football next season in the Conference League, but they need to ensure that their result next weekend is not worse than Athletic Club’s, as the Basque outfit are just a point behind them and have the better head-to-head record.

We highlighted Royale Union Saint-Gilloise’s fairytale return to the Belgian top-flight in the inaugural edition of our Elsewhere In Europe column, but unfortunately, their dream has been shattered in the Championship Play-offs.

Club Brugge turned their points deficit around in the two sides’ meetings, before going on to seal the title with a win over Royal Antwerp.

With their 18th league title, Club Brugge have further cemented their place as the second-most successful side in Belgium, while interim manager Alfred Schreuder has won his first-ever major trophy in the game. He will have the chance to add to that next season, when he will be in charge of Ajax as Erik ten Hag’s replacement.

The good news for Union Saint-Gilloise is that they will finish runners-up for sure after beating Anderlecht, so they will have a chance of qualifying for the Champions League for the first time in their history.

In Switzerland, two sides starved of trophies faced off in the cup final as the top three clubs had suffered upsets in the knockout rounds.

Basel were sent packing by third-tier Etoile Carouge, while Yverdon knocked this season’s league champions FC Zürich out on penalties. Lugano were responsible for Young Boys’ elimination, which eventually enabled them to get the chance to win their first trophy since 1993, while St. Gallen were looking for their first since the turn of the century.

Lugano were by far the better side in the match, and the scoreline reflected that as they came away with a comprehensive 4-1 victory. The defeat must taste doubly bitter to St. Gallen, who were also involved in last season’s final, but fell short against Luzern.