Grading Juventus: How did the players, manager, transfers & results stack up? 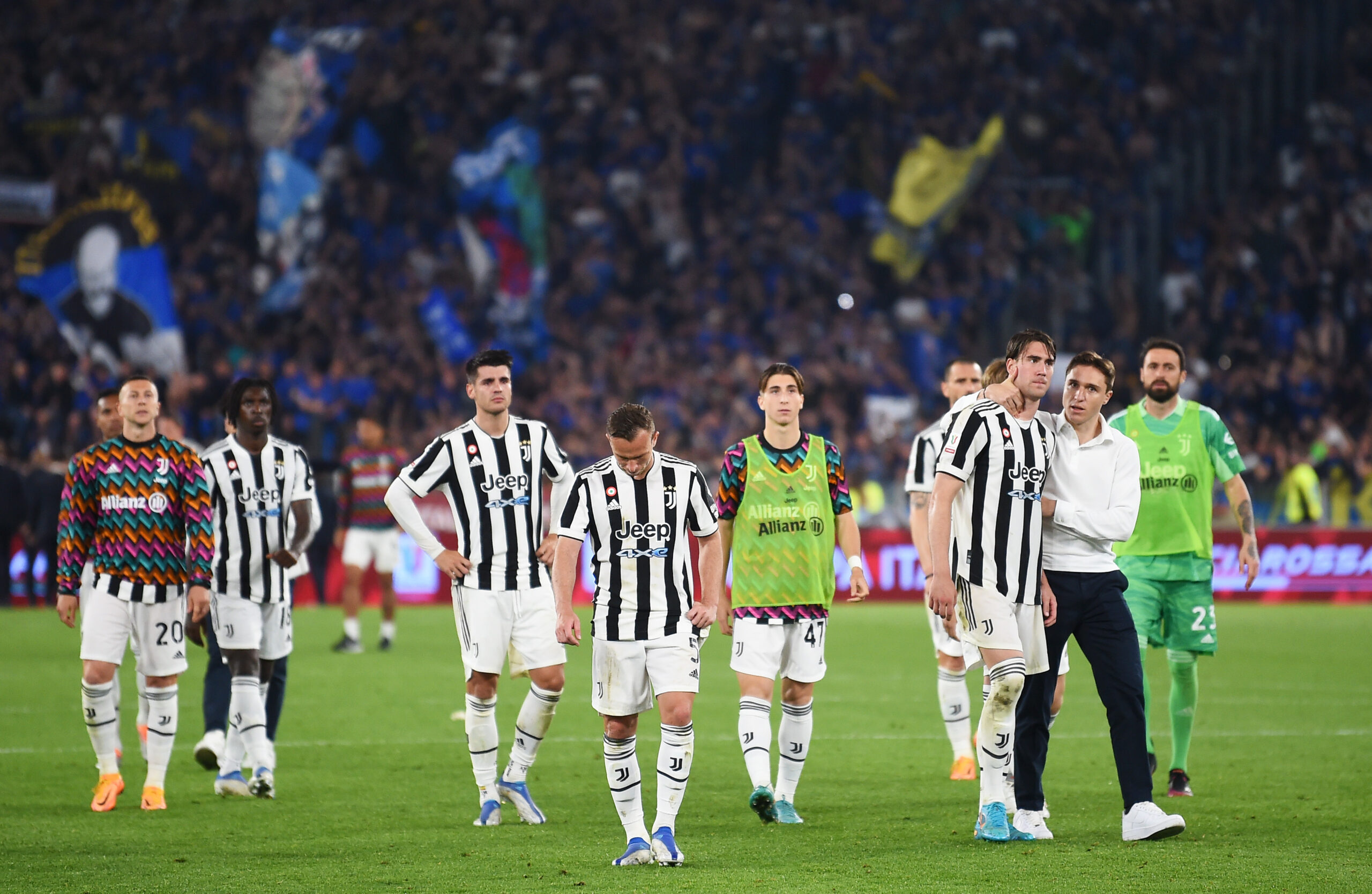 Although they have qualified for the Champions League again, finishing a long way adrift of top spot is not what the fans expect. Here are our grades for Juventus’ season.

Juventus resisted the temptation to splash the cash last summer, despite seeing top scorer Cristiano Ronaldo head out of the club.

Ronaldo’s exit inevitably impacted the team’s attacking threat, and it wasn’t until January that the situation was addressed.

Dusan Vlahovic’s arrival from Fiorentina initially looked an inspired move, with the Serbian continuing the form he showed with his previous club.

However, the 22-year-old has gone off the boil in recent weeks, and it will be interesting to see whether he can turn things around next season.

From a collective viewpoint, the Juventus squad deserves some praise for piecing together a 16-game unbeaten run after a poor start to the season.

However, a trophyless campaign is not what the club’s fans are accustomed to, and the players must shoulder much of the blame for that.

Juventus announced Massimiliano Allegri’s return to the club as manager last summer after two years out of the game.

Allegri was hugely successful during his first spell in charge, guiding the club to five Serie A titles and four Coppa Italia triumphs. He also twice led the club to the Champions League final.

He was tasked with restoring the club’s fortunes after a disappointing season under Andre Pirlo, but it is fair to say that things haven’t gone to plan.

Six defeats in their opening 14 matches effectively ended the title hopes, although a subsequent good run of form was enough to secure a top-four spot.

Crashing out of the Champions League in the round of 16 against Villarreal was embarrassing, while a defeat by Inter Milan in the Coppa Italia was tough to take.

Juventus spurned a golden opportunity to get their hands on a trophy in the cup final, with Allegri’s overly cautious nature allowing Inter back into the game.

A stunning comeback from 3-1 down to win 4-3 at Roma was the standout result during a disappointing league campaign.

Three goals in seven minutes turned the game on its head and kept Juventus in the running to overhaul Atalanta in the race for fourth place.

The other key takeaway from this season’s result was the team’s failure to record victories against any of the title challengers.

They took just four points from their six matches against AC Milan, Inter Milan and Napoli – a dreadful return for a team with title ambitions.

Topping their Champions League group ahead of Chelsea should have been the catalyst for a good run in that competition, but Villarreal had other ideas.

After drawing 1-1 in Spain, Allegri’s side capitulated in the second leg to exit the competition in the round of 16. As missed opportunities go, this was a biggie.

Ronaldo’s return to Manchester United aside, it would be fair to say that Juventus’ transfer business last summer was low key.

Manuel Locatelli was the main arrival, and he was having a decent enough debut season before sustaining a knee injury.

Vlahovic was the headline signing during the January transfer window, but it is too early to say whether the big-money move will pay off.

Denis Zakaria also joined the club from Borussia Monchengladbach in January, and that already looks a shrewd move.

By contrast, allowing Rodrigo Bentancur and Dejan Kulusevski to join Tottenham Hotspur doesn’t seem to be the brightest idea given how they’ve performed in the Premier League.

Ultimately, the club’s transfer business has been a mixed bag, and they need to step things up in that department this summer.

Juventus fans expect the club to win trophies, and rightly so. They were the dominant force in Serie A for almost a decade, but things have gone pear-shaped over the past couple of years.

While Milan and Inter have undoubtedly improved, you would be hard-pushed to say either of them is on a par with most of Juve’s title-winning teams.

Juventus have contributed massively to their own downfall, with Pirlo’s appointment last season a mistake from which they are yet to recover.

Allegri’s return made sense given his previous record, although whether he can replicate that success is still up for debate.

Perhaps more worrying for Juventus fans is the manner of their Champions League exit – being defeated by a mid-table La Liga club is not part of the script.

Having failed to win silverware this season, the weight of expectations could rest heavily on the players and manager next time around.

Although there are a handful of positives to take from the season, the overall feeling is one of massive disappointment.

The club were nowhere near the title race in Serie A while being dumped out of the Champions League by Villarreal was embarrassing.

Blowing a winning opportunity in the Coppa Italia put the cherry on top of an extremely underwhelming cake.

If Vlahovic scores consistently next season, Juventus are not too far away from having a squad capable of challenging for the Serie A title.

They will need a replacement for Paulo Dybala, who has announced he will leave the club when his contract expires this summer.

Giacomo Raspadori could be an excellent option, although Sassuolo will be reluctant to lose a player who has shone for them this season.

Paul Pogba has been linked with a return to Turin, although it is debatable whether Juventus should risk adding an underperforming show pony to their ranks.

The France international is reportedly open to a second stint with Juventus, having played under Allegri between 2012 and 2016.

Sergej Milinkovic-Savic would be a more sensible option than Pogba, although a sizeable transfer fee could scupper their hopes of signing the Lazio midfielder.

A replacement for Giorgio Chiellini is a top priority, while an upgrade at left-back is another critical area which needs addressing.

If Allegri can add two or three quality options to his squad, Juventus should mount a much stronger title challenge next season.