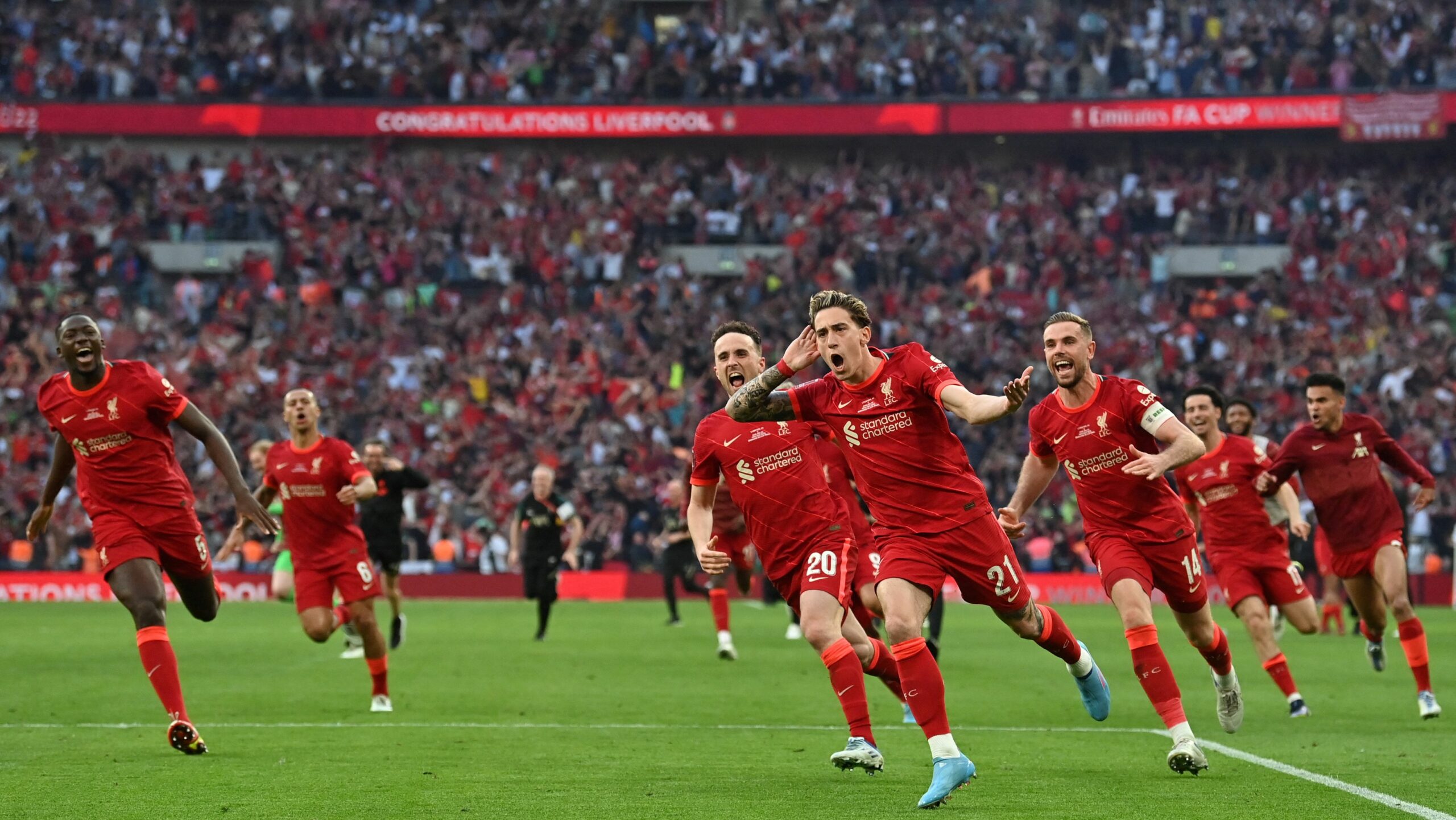 Liverpool defeated Chelsea on penalties for the second time this season to get their hands on the FA Cup.

Jurgen Klopp’s men dominated the early stages, and would have been disappointed not to have taken the lead. Their best chance came when Trent Alexander-Arnold found Luis Diaz with a sensational through ball, but the Colombian was denied by Edouard Mendy.

But the Blues held out through the spell of pressure, and managed to hit back with a couple of chances of their own. Firstly, Mason Mount picked out Christian Pulisic with a low cross, but the American scuffed his effort wide.

Pulisic was heavily involved five minutes later when he slipped a pass through to Marcos Alonso. However, the Spaniard’s touch was poor and Alisson was out quickly to smother him.

In the 32nd minute, Liverpool were dealt a blow when Mohamed Salah went down injured. The winger was taken off, with Diogo Jota coming on to replace him.

Shortly before half time, the substitute almost broke the deadlock. He met Andy Robertson’s cross with his right foot, but could only flick over the bar. The half time whistle went with the scores level at 0-0.

Chelsea exploded out of the traps after the break, coming close to taking the lead on three occasions. Alonso struck narrowly wide from Pulisic’s cross, and the former Borussia Dortmund man had an effort saved after being teed up by Romelu Lukaku.

Alonso had his third opportunity of the game not long afterwards, clipping the crossbar with a dipping free kick from a tight angle. Liverpool responded with a couple of opportunities, with both Diaz and Jota firing wide.

As the game approached its close, the Reds piled on the pressure in search of a winner. Sadio Mane slipped a ball through to Diaz, and the January signing hit the outside of the post from a tight angle.

Just moments later, they hit the woodwork again. This time it was Robertson, who volleyed onto the post from James Milner’s cross.

With the final whistle approaching, the impressive Diaz almost snatched the victory. He shifted the ball onto his stronger right foot and bent an effort inches wide of the far post.

But neither side was able to find the opener within 90 minutes, so the game went to extra time. Just before the extended period, Liverpool seemingly had another injury worry as Virgil van Dijk was taken off.

Even after the extra 30 minutes, there was nothing to separate the two teams. Just like February’s Carabao Cup final, it was to be decided by a penalty shootout.

Alonso was the first to take, and he calmly placed his penalty into the bottom corner. He was followed by Milner, who also scored – although Mendy got a touch to it.

Next up was Cesar Azpilicueta, but his spot kick struck the right post. This gave compatriot Thiago the chance to put Liverpool in front, and he just about converted his in off the opposite post.

Reece James stepped up next, and he clipped his effort straight down the middle and into the net. Roberto Firmino followed, and he also found the net via the glove of Mendy.

Ross Barkley, who was substituted on specifically for the shootout, was the next to take, and he hammered his penalty home. Alexander-Arnold then stepped up and confidently dispatched his effort.

Chelsea’s fifth taker was Jorginho, who had to score to keep the Blues in it. He did so, sending Alisson the wrong way.

Number five for Liverpool was Mane, with the opportunity to clinch the trophy for his side. However, his penalty was weak, and fellow countryman Mendy got down to keep it out.

Sudden death began with a penalty from Hakim Ziyech, and the Moroccan slammed perfectly into the bottom right corner. Up stepped Jota, knowing that a miss would hand the trophy to Chelsea. The Portuguese emphatically finished into the top corner.

Mount was next to take, and Alisson got a hand to it to keep it out. This handed Kostas Tsimikas the chance to seal the trophy for Liverpool.Under immense pressure, the left-back kept his cool and found the bottom corner.

This confirmed Liverpool’s second trophy of the season, and their first FA Cup triumph since 2006. The Reds’ quadruple hopes remain alive going into their final three matches of the season.

As for Chelsea, this is their third FA Cup final defeat in three seasons, and their sixth domestic final loss in their last seven.

Edouard Mendy (7/10) – Made a couple of vital saves in normal time. Stepped up when needed to deny Mane in the shootout. Will have been disappointed not to have kept out a couple more.

Trevoh Chalobah (6/10) – Really struggled early on up against Diaz. Got better as the game went on.

Thiago Silva (7/10) – Kept Mane quiet throughout the game. A solid display, although evidently tired late on.

Marcos Alonso (8/10) – Very unlucky to end up on the losing side. Showed plenty of attacking threat, almost scored on three occasions, defended well, and stuck away his penalty.

Jorginho (6/10) – Could have done more to maintain control in the midfield, but didn’t get overrun. Scored his penalty under extreme pressure.

Mateo Kovacic (5/10) – Some nice touches on the ball, but generally came off second best against Thiago. Substituted on 66 minutes.

Mason Mount (4/10) – Had some bright moments in the first half, but faded afterwards. Missed the penalty that ultimately cost them.

Romelu Lukaku (4/10) – Kept very quiet by Liverpool’s backline. Hardly had a sniff at goal and offered very little in terms of link up play.

Christian Pulisic (7/10) – Often involved in anything Chelsea provided going forward. Could have got himself on the scoresheet.

Alisson (8/10) *MOTM* – Excellent distribution, quick off his line, and made some impressive saves. Managed to make the decisive save from Mount.

Trent Alexander-Arnold (6/10) – Sometimes struggled against Pulisic. Played the pass of the afternoon early on to play Diaz through.

Ibrahima Konate (8/10) – Rock solid. Won pretty much every physical battle he was faced with.

Virgil van Dijk (7/10) – Dealt with the physical threat of Lukaku comfortably. Substituted off with an apparent injury.

Andy Robertson (7/10) – Provided plenty of attacking threat and was unlucky not to get an assist for Jota just before half time. Should have scored when set up by Milner late on.

Jordan Henderson (7/10) – Energetic and won the ball back on plenty of occasions. Sometimes shaky on the ball.

Thiago (7/10) – Technically brilliant and composed as ever. Sometimes overcomplicated things.

Naby Keita (6/10) – Had a few encouraging moments but wasn’t a consistent threat. Substituted on 73 minutes.

Mohamed Salah (5/10) – Picked up an injury in the first half and had to be substituted. Didn’t do a whole lot in his 32 minutes on the pitch.

Sadio Mane (5/10) – Linked up well at times but never really looked like scoring. Lucky not to be punished for his miss in the shootout.

Luis Diaz (8/10) – Always looked like Liverpool’s biggest threat. Gave Chelsea’s defence a very difficult afternoon. All that was missing was a goal.

Diogo Jota (6/10) – Came on in the first half to replace the injured Salah. Had a couple of chances, one of which he will have been disappointed to miss. Scored his penalty.