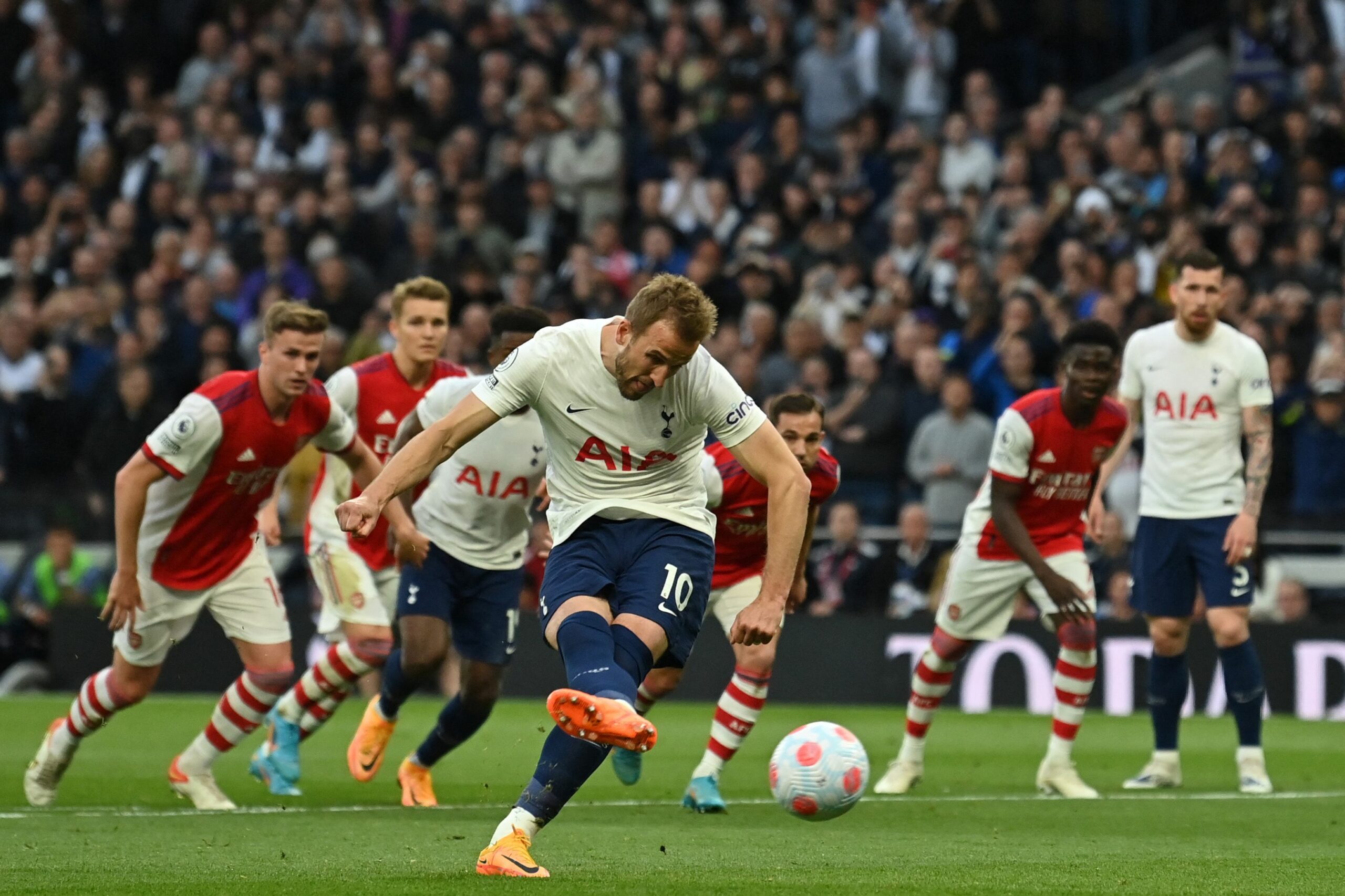 Tottenham Hotspur picked up a huge three points in the race for the Champions League places, comfortably defeating ten-man Arsenal at home.

The visitors had the better of the opening exchanges, without creating anything of note. And they were punished for not being more productive, as the Lilywhites were awarded a penalty in the 21st minute.

Heung-min Son was arriving onto Dejan Kulusevski’s cross, until Cedric bumped the South Korean to the ground. The referee pointed to the spot, and Harry Kane dispatched the penalty into the bottom right corner.

Things went from bad to worse for the Gunners ten minutes later, as they were reduced to ten men. Rob Holding – who had already been booked for persistent fouling – was given a second yellow card for putting his arm into the face of Son.

And Spurs took full advantage of their numerical superiority, doubling their lead in the 37th minute. Kane again was the scorer, nodding in from close range after Rodrigo Bentancur flicked on Son’s corner.

With the half time whistle approaching, both sides had opportunities to add to the scoreline. Emerson Royal fired over after getting on the end of Ryan Sessegnon’s cross, and Eddie Nketiah saw a shot from a tight angle well saved by Hugo Lloris.

Immediately after the break, Tottenham wrapped up all three points with their third goal. Gabriel’s tackle fell perfectly for Son, who finished into the top corner to take him within one goal of Mohamed Salah in the race for the Golden Boot.

That ended up being the final goal of the game. Aaron Ramsdale had to be at his best to keep the score down, denying Royal and Kane in the second half.

It is a vital three points for Antonio Conte’s men, who close the gap on top four to just one point. Meanwhile, Arsenal go into their final two games knowing that they can’t afford to slip up.

Emerson Royal (7/10) – Did reasonably well defensively in the early stages. Got into some good attacking areas, but will have been disappointed not to have scored after wasting two good chances.

Davinson Sanchez (7/10) – Came under very little pressure throughout the evening. Dealt with most things that came his way.

Eric Dier (7/10) – A calm head at the heart of Spurs’ backline. Didn’t allow Arsenal’s forwards to get the better of him.

Ben Davies (7/10) – Also rarely tested, but did well when needed. Made one error in the first half which led to his booking.

Ryan Sessegnon (7/10) – Another promising display from the former Fulham man. Did plenty of running and offered a lot of attacking threat.

Rodrigo Bentancur (8/10) – Controlled the game in midfield. A level above his opponents.

Pierre-Emile Hojbjerg (8/10) *MOTM* – Good on the ball, energetic, combative, composed. An excellent display from the Dane.

Dejan Kulusevski (6/10) – Provided some threat down the right, but the least effective of Spurs’ front three.

Harry Kane (8/10) – Tucked his penalty away well, and showed some good movement to bag his second. Involved in the third.

Heung-min Son (8/10) – Involved in all three goals. Played a huge part in Holding’s red card, and took his goal excellently.

Aaron Ramsdale (7/10) – Couldn’t do anything about the goals. Made a couple of good saves to keep the score down.

Cedric (4/10) – Clumsy challenge on Son to concede a penalty. Had a poor game.

Rob Holding (2/10) – Couldn’t deal with the threat of Son without fouling him. Eventually got himself idiotically sent off in the first half.

Gabriel (6/10) – Perhaps a bit unlucky to concede three. Dealt with most of the challenges thrown at him.

Takehiro Tomiyasu (5/10) – Not a great performance, but far from the worst on the pitch.

Mohamed Elneny (4/10) – Found it very difficult up against Bentancur and Hojbjerg. Completely overran.

Granit Xhaka (4/10) – Also struggled to maintain any sort of control in midfield.

Bukayo Saka (5/10) – Showed some threat early on, but couldn’t do much after falling behind.

Martin Odegaard (4/10) – Anonymous for large parts of the game. Way below the standards we’ve seen from him lately.

Gabriel Martinelli (5/10) – Looked like the most likely to do something for Arsenal, but that isn’t saying much. Worked hard, but was substituted on 64 minutes.

Eddie Nketiah (5/10) – Put in the effort, but was completely isolated for most of the evening. Came close with a half chance before half time.