Scout Report: How Erling Braut Haaland will fit in at Manchester City 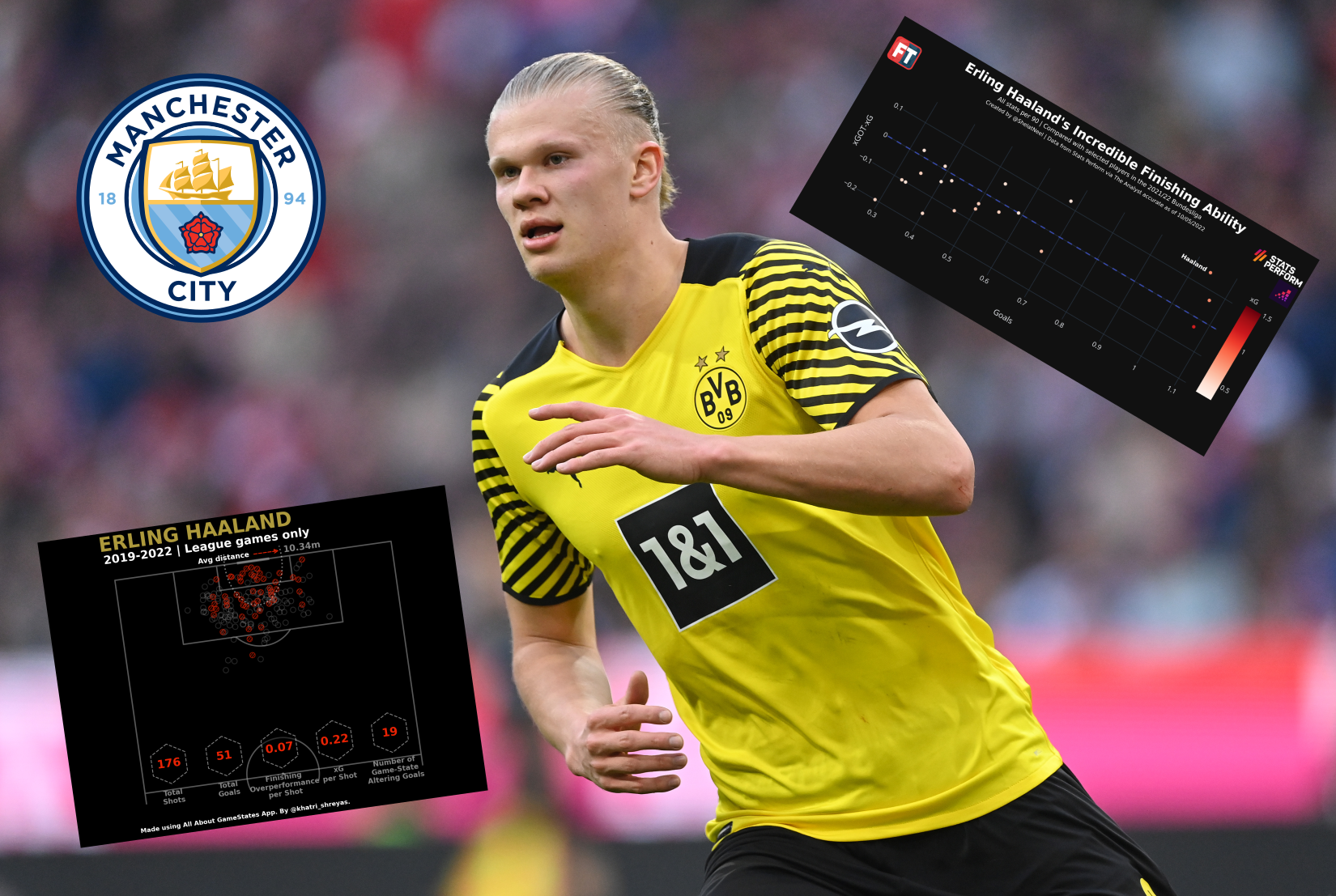 It has finally happened. After about two years of speculation and rumours, Manchester City have signed an out-and-out striker.

The striker they have signed is not half bad either; in fact, he is the fastest player to reach the 20 goals mark in the Champions League, having done so in just 14 matches.

Signing one of the most exciting young forwards in the world for just over a reported £51 million is an incredibly good deal, and even though the true cost of this transfer will be much greater because of agent fees and wages, a player of this calibre certainly is worth it.

Erling Braut Haaland spent his childhood in his family’s hometown, Bryne. Coming through the youth academy of the namesake club, he made his professional debut in the second tier of Norwegian football aged just 15. Soon, he moved to Molde in the first tier, where he spent a couple of years honing a craft.

At the start of 2019, Haaland was picked up by Austrian champions RB Salzburg, with whom he spent just one year before his impressive performances both domestically and in the Champions League began attracting attention from all over Europe. He decided to cross the border and move to Germany in 2020, where he has been playing for Borussia Dortmund ever since. It is easy to forget, but he is still just 21 years old.

The main thing Haaland does is score goals, and lots of them too. In fact, since he moved to RB Salzburg aged just 18, he has averaged more than one goal per 90 in every league season he has played. Altogether, he has scored 78 goals in the Austrian and German top flights in 6355 minutes on the pitch, so his average is just over 1.1 goals per 90 since the start of 2019.

There is less publicly available xG data on the Austrian Bundesliga, but his 60+ games in the German top division make up a comfortably large enough sample size for us to use data to analyse his finishing.

Based on the xGOT (Expected Goals On Target) metric, Haaland has been the best finisher in Germany this season as the above scattergram indicates.

Except for a couple of minor slumps, the Norwegian international has been consistently outperforming his xG at a relatively stable rate, indicating that his overperformance is more a result of skill than luck, even more so given the fairly big sample size of shots.

Zooming in to his shooting tendencies, it is quite clear that Haaland only shoots when he has a clear sight of goal, which is why he can boast of a very high npxG/shot average of 0.22 over the course of his time at Dortmund. For context, among the players who have attempted 50+ shots this season, the highest such average belongs to Haaland’s Dortmund teammate Marco Reus, who weighs in at 0.21.

Now that we have finished stating the obvious, let us move on to more pressing matters — Haaland’s overall game outside of shooting and scoring goals.

His pizza chart reiterates his incredible goal-scoring and penalty box presence, but his defensive and chance creation numbers are of more intrigue here. Although his tackles and interceptions numbers look very poor, that will not concern Manchester City because his pressing numbers show that he is willing to work hard for his team out of possession too.

This season has been Haaland’s best in terms of assists as he has eight in the league, but his underlying xA (Expected Assists) tally of 5.7 has not seen a massive increase from last season’s 5.4. Nonetheless, Haaland ranks in the 92nd percentile among Bundesliga forwards in terms of xA per 90, so he is not half bad in this regard either.

A quick look at his key passes from this season’s Bundesliga indicates that most of the chances the Norwegian international creates are short passes into the path of teammates’ runs from around the edge of the box. Indeed, link-up passing is one of his strengths, and Smarterscout gives him a rating of 83 (out of 99) in this regard.

The question marks begin to appear when we delve deeper into Haaland’s involvement outside the region in and around the penalty area. His heatmap from this season makes it quite clear that that is his preferred workspace.

Despite playing for the side with the second-highest average possession in the Bundesliga, Haaland’s 22.24 passes attempted per 90 this season only rank him in the 41st percentile among forwards in his league. Using the xGBuildup metric which measures a player’s involvement in their team’s attacking play outside of shots and chances created, we find Haaland looking close to average when compared with other strikers in the Bundesliga.

This is the main area of improvement for Haaland at Manchester City, and the quicker he works on this, the easier his transition to the Premier League will be.

He will see other differences too, though, such as deeper opposition defences. The stats back this up — while Dortmund’s opponents have applied 1868 pressures against them in their own defensive third in the league this season, that number bumps up to 2569 for Manchester City. Although the defending Premier League champions have played two more games, a roughly 38% increase is quite substantial.

What this means for Haaland is that he will have less space to run into behind opposition defences and trouble them with his incredible speed. The Norwegian international has recorded the fifth-highest top speed in the Bundesliga this season at 36.3 km/h, but he will get fewer opportunities to turn on the afterburners in England.

Haaland is not the only one who will have to adapt as a result of this move, though, because Manchester City will have to slightly tweak the way they play in order to accommodate him. As they have operated without a pure striker this season, they have been an incredibly fluid team in possession with players exchanging positions and making countermovements almost incessantly, dizzying opposition defences in the process.

Their favourite method of chance creation, therefore, is cutbacks from close to the byline.

The main downside of Manchester City’s fluidity is that they do not have a consistent penalty box presence, which is why many of their cutbacks end up flashing harmlessly across the face of goal (prompting the co-commentator to complain about City’s lack of a striker). Unsurprisingly, CIty’s average of under 0.42 shots per touch in the opposition penalty box is by far the lowest in the league. For context, the gap between them and Liverpool (who rank second-lowest in this metric) is about the same as the gap between the Jürgen Klopp’s side and Southampton (who rank 11th-lowest in this metric).

We have already extensively analysed Haaland’s superb penalty box presence and tendency to get into great positions to shoot, so he should be able to help City bump those numbers up in theory. The flipside to this is that the defending champions will lose a bit of their dynamism in the box. Previously, it was quite often the midfielders or wingers who arrived at the end of these cutbacks with late runs into the box, but in Haaland, they will have a more designated presence in there now.

The good news, though, is that Haaland already is quite used to getting on the end of cutbacks, as a lot of his chances at Borussia Dortmund have been created in this manner.

This sums up Haaland’s transfer to Manchester City quite well — he brings qualities to the table that the rest of the squad perhaps do not possess, but in order to properly integrate him, both parties will have to make slight changes to the way they play. In brief, we can expect Manchester City to be slightly less fluid and dynamic in their attacking play with Haaland in the side, but his presence could well make them even more ruthless and efficient.

One man who might not be over the moon with this transfer is Julián Álvarez, who looks set to also join Manchester City this summer, as they have already struck a deal with his current club River Plate. As we discussed while analysing him, though, he can also play on the right side, so the pair can coexist on the pitch without getting in each other’s way.

From Borussia Dortmund’s perspective, there was little they could do to prevent this as Manchester City triggered a release clause in Haaland’s contract. They can now reinvest the money they have got in trying to replace the Norwegian, and it appears that a good part of that will be going to Salzburg again, who will part ways with Karim Adeyemi in exchange.

Adeyemi has enjoyed a great season in the Austrian Bundesliga, where he is the top scorer with 19 goals and has four assists to his name too. Additionally, he is the league leader in terms of xG with a tally of 16.2 and xGOT with a tally of 18.1, so his goalscoring and finishing ability is pretty good already. Therefore, he should help Dortmund cope without Haaland quite well.

Irrespective of what happens there, this is an incredible deal from Manchester City’s point of view, as they are getting a player with a profile that their squad currently lacks, who also happens to be one of the world’s most prolific strikers in the last few seasons. If everything clicks well, Manchester City could somehow become even dangerous in attack next season.