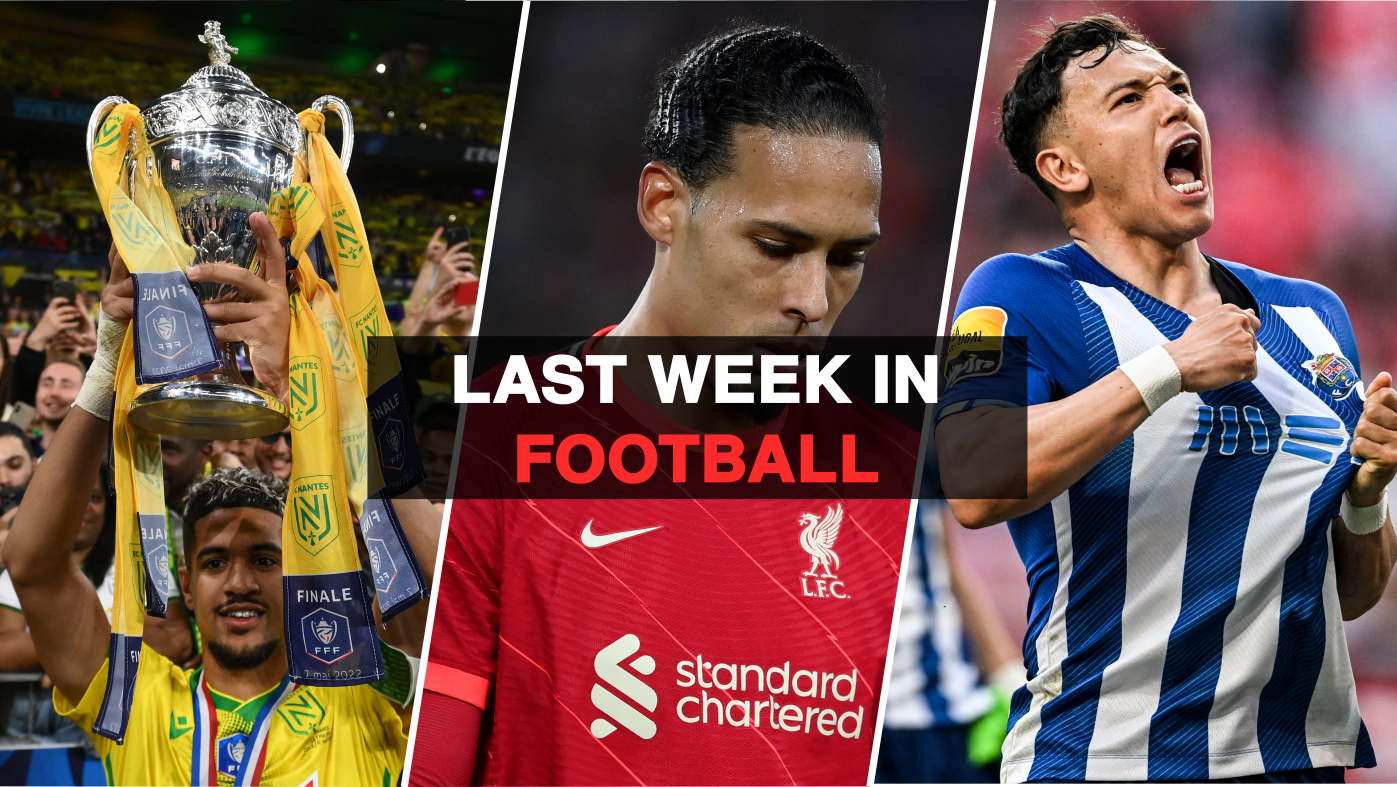 As we approach the end of the 2021/22 season, hugely consequential fixtures are taking place across Europe almost every day. The most recent weekend was especially packed with massive results such as Nantes lifting the Coupe de France trophy, Liverpool losing ground in the Premier League title race and Porto winning the Primeira Liga title. We will cover all of that and more in this edition of Last Week In Football:

Just weeks after Paris Saint-Germain sealed the Ligue 1 title, the fate of another trophy was decided in the French Capital, where Nice took on Nantes in the Coupe de France final, which did not involve PSG for the first time in eight years.

The match itself was a very uneventful encounter as two sides that played a more cautious brand of football squared off, but there was a decisive goal scored just seconds into the second half after Nantes were awarded a penalty for handball, which was dispatched by Ludovic Blas.

It was quite fitting that the 24-year-old French midfielder proved to be the difference-maker on such a big night for Nantes, as he has perhaps been a little underappreciated this season. While the likes of Moses Simon and Randal Kolo Muani have stolen headlines for a variety of reasons, Blas has quietly gone about his work and scored 14 goals and three assists in all competitions.

Additionally, he plays a key role in Antoine Kombouaré’s system as he primarily operates behind the front two and between the opposition lines, which is why his greatest strength apart from goalscoring is ball progression.

His side were able to hold on to the win against Nice with relative comfort, so they went on to lift their first trophy in 21 years and booked a spot in next season’s Europa League along with it.

There finally was a slip-up in the tense Premier League title race this weekend, as Liverpool were held to a 1-1 draw by a defensively resolute Tottenham Hotspur side.

This was the first time either of the top two has dropped points in the league since their meeting last month, and prior to that, you need to go all the way back to the 14th of March when Manchester City failed to score at Selhurst Park against Crystal Palace.

After their huge 5-0 win against Newcastle United, Manchester City have opened up the gap at the top to three points and goal difference swing of four in their favour, so they certainly are the favourites to win the title now with just three matches left.

Both extremes of the table are battlezones in Serie A, and there was a direct clash at the bottom as Salernitana hosted Cagliari. In an incredibly tense match, Salernitana looked like they were going to come away with all three points until the 99th minute when a set-piece goal for Cagliari levelled the scores.

Nonetheless, this is not the worst result for Salernitana who remain one point above Cagliari and the relegation zone, and two above Genoa who beat Juventus in dramatic fashion on Friday night.

For a club that was almost relegated in December because it struggled to find a buyer after the previous owner Claudio Lotito was forced to sell since him owning two clubs in the same league (the other being Lazio) would break FIFA regulations, this is a remarkable turnaround

Salernitana are now being given a 60% chance of survival by FiveThirtyEight, so the odds are in the favour as we enter the last two matchday of the season.

Bayer Leverkusen sealed a spot in next season’s Champions League with a convincing win over Hoffenheim, who will miss out on European football next season as a result of this defeat.

The star of the show for the visitors was Patrik Schick, who looks to be back to his best after suffering a muscle injury in February. His brace in this match takes him up to 23 non-penalty goals in the Bundesliga this season — a tally greater than anybody else’s in Europe’s top five leagues bar Robert Lewandowski.

The Czech striker has scored the most goals in a Bundesliga season for Bayer Leverkusen since Stefan Kießling managed 25 in 2012/13, and his tally will be under threat too when Freiburg visit the BayArena on the final matchday of the season.

The La Liga title is already in Real Madrid’s trophy cabinet, but there is quite a scrap going on down at the bottom of the table. Granada lifted themselves back out of the bottom three after hitting Mallorca for six, with 40-year-old forward Jorge Molina coming off the bench to bag a brace and assist two other goals, taking his tally up to 15 goal involvements in the league this season.

With three matchdays left in La Liga, no one below 12th-placed Rayo Vallecano is mathematically safe from relegation yet, although Espanyol, Elche and most probably Getafe too seem to have enough points on the board already. Below them, though, it is all to play for, especially given Levante’s impressive performances in recent weeks.

Over in Portugal, Porto dethroned Sporting as the Primeira Liga champions at the home of their rivals Benfica, winning their 30th league title in the process.

They came quite close to doing so without tasting defeat over the course of the season, but their unbeaten record came to an end away at Braga a couple of weeks ago on a day when they had the chance to seal the title. Nonetheless, this has been a very impressive campaign for them, as they continued to operate at a high level despite losing their star attacker in the winter, although they have slumped of late.

Behind them, Sporting have qualified for Champions League football yet again by virtue of finishing runners-up, while Benfica will have to go through the play-offs for the competition as they end up in third spot in the league.

Our final match takes us back to Italy, where the regular Serie B season drew to a close in a typically dramatic fashion. Cremonese looked set to miss out on direct promotion as they had been pipped to second place by Monza on the penultimate matchday. With just a point separating the sides, though, anything was possible.

Away at Como, Cremonese took a first-half lead and doubled it early on in the second period, while Monza were struggling to score against Perugia. Ultimately, they conceded a late goal to lose and slip all the way down to fourth place, meaning Cremonese finished second and will feature in Serie A next season for the first time in 26 years.

Although Le Tigri picked up more points in the first half of the season (35) than they did in the second half (34), their league position only really stabilised in the latter stages of the season, as they endured a chaotic season like all other clubs in Serie B.

Elsewhere, Lecce won Serie B by beating bottom-club Pordenone, while Pisa, Brescia, Ascoli and Benevento have qualified for the play-offs along with Monza and Perugia, with the latter prevailing thanks to a superior head-to-head record against Frosinone, who failed to pick up the solitary point they needed to finish in the top eight.

The play-offs will begin in a week’s time, but before that, we highly recommend that you come to grips with the format, which we attempted to explain in the latest edition of our Elsewhere In Europe column.