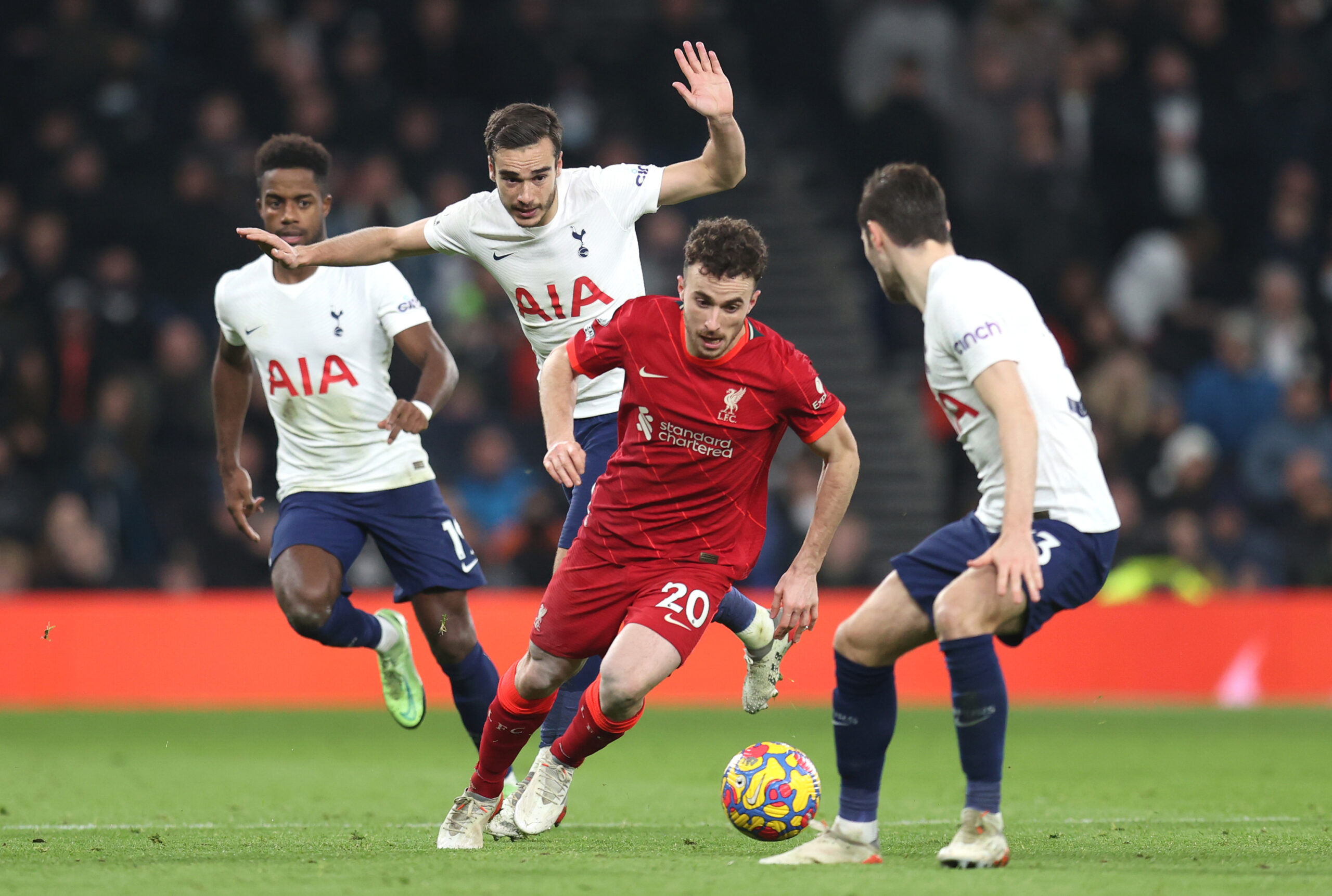 It’s been a cracking Premier League season so far, and it has almost reached its end. And yet, there is still plenty left to play for: the title race is still going, the Champions League spots are yet to be determined, and the relegation battle remains open.

Perhaps the most important game of the final month comes this weekend at Anfield. Liverpool sit one point behind Manchester City in second place, while Tottenham Hotspur are two points off bitter rivals Arsenal in fifth. Neither side can afford to drop points.

The reverse fixture was one of the best games of the season, full of quality, incidents and controversy. The scores finished level at 2-2, with Harry Kane, Heung-min Son, Diogo Jota, and Andy Robertson all getting on the scoresheet. We hope this weekend’s clash will be just as good, and you can watch it live on tv or catch it on football streaming sites.

Jurgen Klopp’s men have the potential to go down as one of the greatest club sides ever should things go their way. This May is possibly the most important month in the club’s history.

They have already won the Carabao Cup, and have three more trophies left to fight for. They defeated Manchester City to reach the FA Cup final a few weeks ago, and got past Villarreal to set up a Champions League final with Real Madrid.

Meanwhile, they are still well in the title race. With four games remaining, they reside in second place, just a point off leaders Man City.

From their last 26 matches in all competitions, they have won 22 and lost just one. They will need to maintain this form for their final six games if they wish to make history.

The objective is simple: Liverpool need to win on Saturday. If they don’t, they probably won’t win the Premier League.

Man City have four games left, and not one of them comes against a side in the top six. They probably won’t drop any more than two points, if any. Liverpool need to maintain a 100% record in order to take advantage of any slip-ups.

Nuno Espirito Santo began the season in fine fashion, winning the Manager of the Month award for August with three wins out of three. But this wasn’t to last, and the Portuguese was replaced by Antonio Conte in November.

Conte has had several ups and downs in north London so far, and it is unclear whether he will stick around for much longer. Nonetheless, he has got them fighting for the Champions League places.

The Lilywhites are two points behind fourth-placed Arsenal, and the pair will meet on Thursday. Spurs will be hoping to still be within touching distance of their local rivals by the time they face each other.

Tottenham Hotspur 1-0 Manchester City – Spurs’ summer had been turbulent. Their search for a new manager was far more complicated than it had to be, and star man Harry Kane was pursuing a move away. The England captain was absent from their matchday squad for the opening weekend.

In contrast, Man City came into the new season looking hopeful. They had cruised to the title in the previous year, and brought in Jack Grealish on a club record fee.

So it came as a shock when the home side took all three points. In a rather quiet game, Heung-min Son’s second half strike was the difference, finding the far corner from outside the box.

That run looked set to come to an end at the King Power Stadium. The score was even at half time, with Kane’s finish cancelling out Patson Daka’s opener. But when James Maddison struck to put Leicester City back in front with 15 minutes remaining, Spurs appeared to be heading for defeat.

That was until the dying seconds, when substitute Steven Bergwijn netted a scrappy equaliser. Rather incredibly, that wasn’t the end of the drama.

The Foxes went for goal from kick off and lost the ball immediately. It came to Kane, who found Bergwijn with an excellent through ball. The Dutchman rounded the onrushing Kasper Schmeichel and finished in off the far post to pull off a miraculous comeback.

Manchester City 2-3 Tottenham Hotspur – If Liverpool do win the league, they will owe Spurs a huge thank you. They completed a league double over Man City, largely down to a stellar performance by Kane.

Their trip to the Etihad Stadium couldn’t have started much better, with their front three combining for the opener. Kane fed Son, who squared for Dejan Kulusevski to net his first goal in English football.

This lead lasted approximately half an hour, as Ilkay Gundogan slammed in for an equaliser. But Tottenham took the lead once again, with Kane firing into the roof of the net from Son’s cross.

As the game approached injury time, the home side looked to have salvaged a point. Cristian Romero handled a low cross, and Riyad Mahrez emphatically dispatched his penalty into the top corner.

Once again, however, Spurs left it late to pick up all three points. Kulusevski crossed for Kane, and the forward planted his header into the bottom corner to complete a memorable away victory.

Tottenham Hotspur 5-0 Everton – Unlike the other three matches, this fixture was a comfortable one for Tottenham. Relegation battlers Everton turned up to north London but hardly put up a fight as they were humiliated.

An own goal by Michael Keane set the tone early on, and Son added a second shortly afterwards. Kane got in on the act before half time, racing through on goal and finishing into the far corner past international teammate Jordan Pickford.

Spurs showed a bit of mercy in the second half, but still managed to extend their lead. Sergio Reguilon scored within a minute of coming on, and Kane grabbed a second with an excellent volley. 5-0.

Crystal Palace 3-0 Tottenham Hotspur – After beginning the season with three consecutive wins, Tottenham travelled to Selhurst Park in high spirits. They were given a swift bump back down to Earth at the start of September.

It was a truly miserable afternoon for the visitors, who managed just 38% possession and two shots. Wilfried Zaha gave Crystal Palace the lead from the penalty spot with 15 minutes remaining, and a late brace from debutant Odsonne Edouard sealed the three points.

Emile Smith Rowe put the Gunners in front in the 12th minute, and then set up Pierre-Emerick Aubameyang to double their advantage. Bukayo Saka made it three before half time, finding the far corner with his weaker right foot.

The second half was kinder for Nuno’s team, and they got one back through Son. But this was too little too late, and the match ended in defeat.

However, the game didn’t go according to the form book. The north London club didn’t manage a single shot on target, and fell to defeat when Leandro Trossard struck a winner in the 90th minute.

Cristian Romero – Tottenham’s transfer business hasn’t always been the best, with a number of their most expensive signings failing to make a significant impact. Cristian Romero, however, has been widely regarded as a good buy.

The Argentine continued the success he had last season with a string of impressive displays. He has been considered by many to be one of the best centre-backs in the league this term, helping his club to eight clean sheets in all competitions.

Harry Kane – This season has been a heavily mixed one for Harry Kane. After failing to get his desired move to Man City, he put in a series of underwhelming performances for the first few months of the campaign.

The striker has since bounced back from this and recaptured his best form. He has scored 13 and assisted eight in the league – only two players have more goal contributions.

Heung-min Son – The South Korean has always been one of the main men at Tottenham. This season, he seems to have reached another level.

Son has enjoyed his best ever goalscoring season, hitting 19 league goals so far. This tally puts him just three behind Mohamed Salah in the Golden Boot race with four games left. If he could win it, he would become the first Asian player to win the top scorer award in the history of the English top flight.

The upcoming week is a huge one for Spurs. After their trip to Anfield, they welcome Arsenal to the Tottenham Hotspur Stadium, in a derby which could prove decisive.

If they come out from these two fixtures ahead of the Gunners in the table, they will fancy themselves to secure Champions League football. Their final home game comes against relegation strugglers Burnley. They will be favourites, but the Clarets have recently hit form.

Their closing match couldn’t be much kinder on paper, as they travel to Carrow Road to face already-relegated Norwich City.