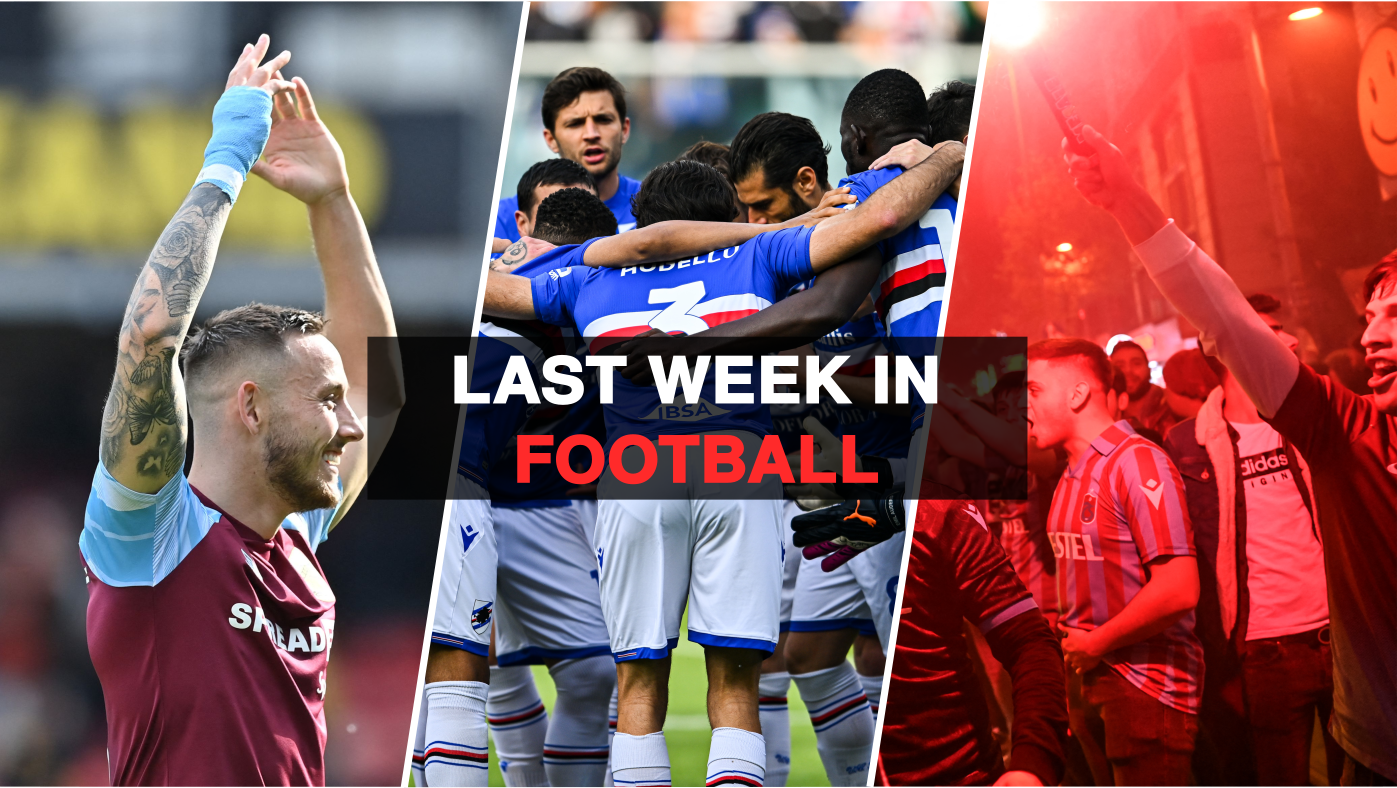 There were loads of major trophies lifted across Europe this weekend as both league titles and cups were being won. We will touch up on a couple of those in this edition of Last Week In Football, but before that we will quickly mention Fulham’s English Championship triumph, Zenit St. Petersburg’s fourth-consecutive Russian Premier League title, RB Salzburg’s eighth domestic double and Molde’s success in the Norwegian cup.

Now, onto the action across the major European leagues:

There was a huge result in the thrilling relegation battle in England, where Burnley began a comeback in the 83rd minute of their match against Watford and completed it within three minutes, pulling 12 points clear of the Hornets and all but guaranteeing their relegation.

There are parallels between this match and Burnley’s season, especially in terms of their underlying numbers, as their five-game rolling average xG difference has just become a positive number for the very first time this season right at the death.

Lots of credit must go to interim manager Mike Jackson and his coaching staff for this turnaround which has seen them stay unbeaten after four matches. Burnley’s board also deserve their plaudits for taking the tough decision of sacking Sean Dyche, for which they were initially scoffed at but are now being vindicated.

The importance of this result was magnified on Sunday, when Everton came away with a shock victory against Chelsea, so the fact that Burnley have leapfrogged Leeds United thanks to a better goal difference means that they have a buffer to the relegation zone.

The race for promotion from Serie B is quite chaotic as we highlighted in the latest edition of our Elsewhere In Europe column, but the battle to avoid being a part of that next season in Serie A is pretty tense too.

There was a huge result in the Derby Della Lanterna this weekend, where Sampdoria’s narrow victory means that they are now seven points clear of the relegation zone, while Genoa are three away from safety and have dropped behind Salernitana, who are mounting a bit of a great escape.

Things could get worse for Il Grifone since Salernitana have a game in hand against bottom-club Venezia in midweek where a win would take them out of the bottom three and leave Genoa four points behind. With just three matchdays left, Genoa’s chances of survival are seemingly out of their hands.

Freiburg took a massive step towards realising their Champions League dream this weekend, as they re-entered the top-four after prevailing in a thoroughly entertaining clash against Hoffenheim.

This result, coupled with Borussia Mönchengladbach’s win over RB Leipzig on Monday night, means that Freiburg have a one-point buffer in the top four with just two matches left for them. However, these will be tough clashes as their upcoming opponents are European hopefuls Union Berlin and third-placed Bayer Leverkusen.

Should they manage to hold on to their Champions League spot, they will create history by qualifying for the premier continental competition for the first time since the club was founded.

In between their two-legged Champions League semi-final against Manchester City, Real Madrid sealed the La Liga title by thrashing Espanyol 4-0. They were playing with a second-string side as the big hitters were being rested for the midweek match, but a brace from Rodrygo and goals from Marco Asensio and Karim Benzema off the bench got the job done.

The last match of the weekend in France was a big clash in the race for Europe, as second-placed Marseille hosted eighth-placed Lyon, who needed a win to stay in contention for a top-six spot.

The hosts controlled proceedings in the first half and created a couple of decent chances too, but they failed to register anything on the scoreboard. Things came crumbling down for them after they conceded a scrappy goal following a free-kick early on in the second half, as they looked a completely different side to the one that played for the first 45 minutes and ended up losing by three goals.

In spite of this, Marseille remain in a commanding position to secure the best of the rest spot behind Paris Saint-Germain as they have a three-point lead over Rennes and Monaco, but any further slip-ups could prove quite costly for them. Lyon, on the other hand, remain outside the Europe spots for now, but they have closed the gap to Strasbourg above them to just two points.

Arguably the biggest result of the weekend came in Turkey, where Trabzonspor finally lifted their seventh Süper Lig title, 38 years after their sixth. In fact, this is only the second time since then that the Turkish champions have been a club other than the ‘Big Three’ (Beşiktaş, Fenerbahçe and Galatasaray).

The struggles of those clubs this season have been a big factor in Trabzonspor’s success, as Abdullah Avcı’s side spent all but two matchdays at the top of the pile.

They really did stutter over the finish line as they won just two of their last eight league matches before sealing the title, which is a sign of them regressing to the mean after heavily overperforming their xG numbers for most of the season, as we discussed in last month’s edition of our Elsewhere in Europe column.

What this means is that it is difficult to envisage them successfully defending this title, but for now, the only concern for the residents of the port city of Trabzon is that they finally are Turkish champions once more.

There was a conclusion to another storyline that we highlighted in last month’s edition of Elsewhere In Europe as well, as FC Zürich lifted their first Swiss Super League title in 13 years at the home of their arch-rivals Basel with a two-goal victory.

For a club that finished just one spot above the relegation zone last season and was in the second tier as recently as five years ago, this certainly is quite an achievement. Their route to the title was not as smooth as Trabzonspor’s, but after Basel drew away at Young Boys in mid-December, Zürich reclaimed top spot and did not look back since.

Another difference between Zürich and Trabzonspor’s successes is that the former’s underlying numbers have been decent throughout and they have not seen a massive drop-off in results, while both of the traditional contenders — Basel and Young Boys — have chopped and changed managers mid-season. So, Zürich might have a good chance of defending the title, but for now they will celebrate their status as champions.