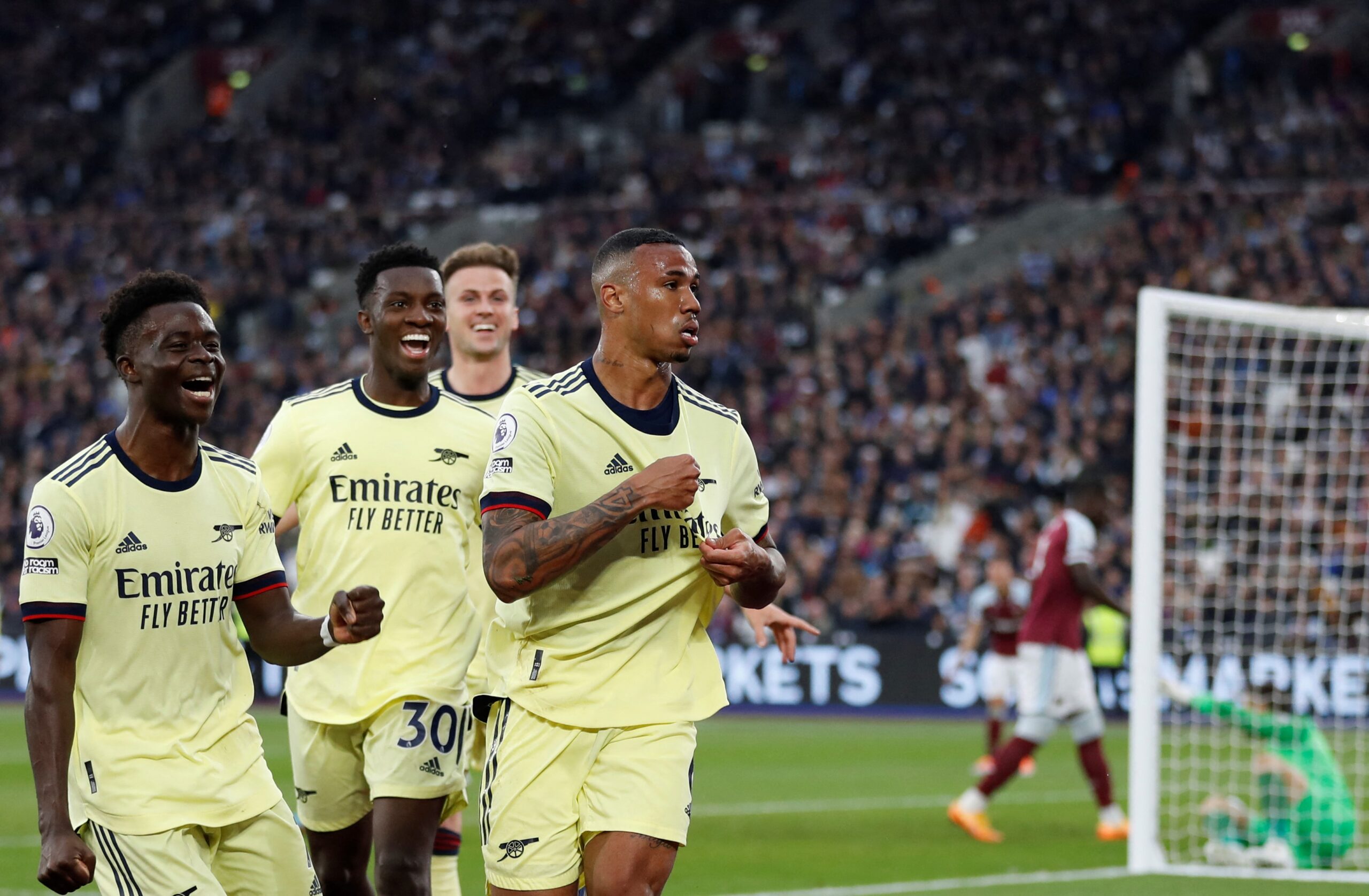 There wasn’t a whole lot to report from the opening half hour. Declan Rice hit a shot straight at Aaron Ramsdale from outside the box, and Manuel Lanzini saw his shot well blocked by Rob Holding.

But the game exploded into life shortly afterwards. Arsenal came close to taking the lead in the 38th minute when Eddie Nketiah curled a shot towards the far corner, but Lukasz Fabianski got down well to turn it wide.

However, West Ham’s relief was short-lived. From the resulting corner, Bukayo Saka found the head of Holding, and the centre-back diverted his header into the far corner for his first ever Premier League goal.

But the Hammers weren’t discouraged by this, and almost hit back instantly with a set piece of their own. Rice glanced a header at the front post from a corner, but Ramsdale again was on hand to deny his international teammate.

The hosts would get level shortly before half time, with club top scorer Jarrod Bowen grabbing his tenth of the league campaign. Vladimir Coufal found the former Hull City man with a low cross, and he took one touch before converting via a deflection.

The second half picked up where the first left off, and Arsenal got themselves back in front. And it came in similar fashion to their opener.

First, Fabianski kept out Saka’s low shot. And from the corner, the ball fell to the feet of Gabriel Martinelli. The Brazilian found compatriot Gabriel with a dinked cross to the back post, and the defender headed in to restore the Gunners’ advantage.

David Moyes’ men pushed for an equaliser, but were met by a resolute Arsenal defence. Meanwhile, the away side threatened to get a third on the counter attack.

Nketiah twice came close to extending his side’s lead. First, he fired an effort wide after being played through by Mohamed Elneny, and then he had a goal-bound shot tipped away by Fabianski. Neither side was able to change the scoreline further, meaning that Arsenal took all three points.

The win takes Mikel Arteta’s men back into the top four, jumping back above Tottenham Hotspur after the Lilywhites had beaten Leicester City earlier today. As for West Ham, they missed the chance to go back into the Europa League spots, and now sit three points behind Manchester United with three matches to go.

Lukasz Fabianski (7/10) – Made a few good stops, especially his two to deny Nketiah. Maybe will have been disappointed not to have kept out Gabriel’s header.

Vladimir Coufal (7/10) – Showed plenty of attacking threat and got himself an assist.

Kurt Zouma (6/10) – Had an interesting battle with Nketiah, which the striker just about edged. Solid otherwise.

Aaron Cresswell (6/10) – Can’t be blamed for either of the goals, and didn’t do a whole lot wrong.

Ryan Fredericks (5/10) – Defended well enough. Couldn’t do much going forward, having been picked in an unfamiliar left-back role.

Declan Rice (7/10) – At the heart of most things that West Ham did going forward. Unlucky not to score with a header from a tight angle.

Mark Noble (5/10) – Worked hard and battled, but the Hammers clearly would have been better off with Soucek in the middle.

Said Benrahma (5/10) – Could rarely get the better of Tomiyasu. Substituted late on.

Jarrod Bowen (7/10) – Got himself another goal and caused some problems for the Gunners’ backline.

Aaron Ramsdale (6/10) – Made one very good save to prevent Rice from equalising in the first half. Fortunate to get away with one in the second half when he rushed out of his goal and didn’t reach the ball, but did little of note otherwise.

Takehiro Tomiyasu (7/10) – Came back from injury and looked very solid. Didn’t let Benrahma past him.

Rob Holding (8/10) *MOTM* – Stepping in for Ben White, Holding came into the starting XI and was excellent. Solid defensively, and managed to get himself on the scoresheet.

Gabriel (7/10) – Arguably could have got tighter to Bowen for his goal, although this may be a slightly harsh criticism. Made up for it with the winning goal.

Nuno Tavares (5/10) – Struggled with the attacking threat of Coufal down his side. Didn’t close down the full-back quick enough for the equaliser.

Mohamed Elneny (7/10) – Played one delightful ball through to Nketiah in the second half. Energetic and combative as always.

Granit Xhaka (6/10) – Sometimes good on the ball and fought as hard as ever. Allowed Rice to get the better of him at times.

Bukayo Saka (6/10) – Assisted the opener, and had a strike well saved. Not his best game outside of that.

Martin Odegaard (5/10) – A few nice touches in the first half, but didn’t have anywhere near the influence that we know he’s capable of.

Gabriel Martinelli (6/10) – Anonymous in the first half. Did more after the break, and assisted the winner.

Eddie Nketiah (7/10) – Another impressive performance for the 22-year-old. Gave the home defence a tough battle, and was unlucky not to score.