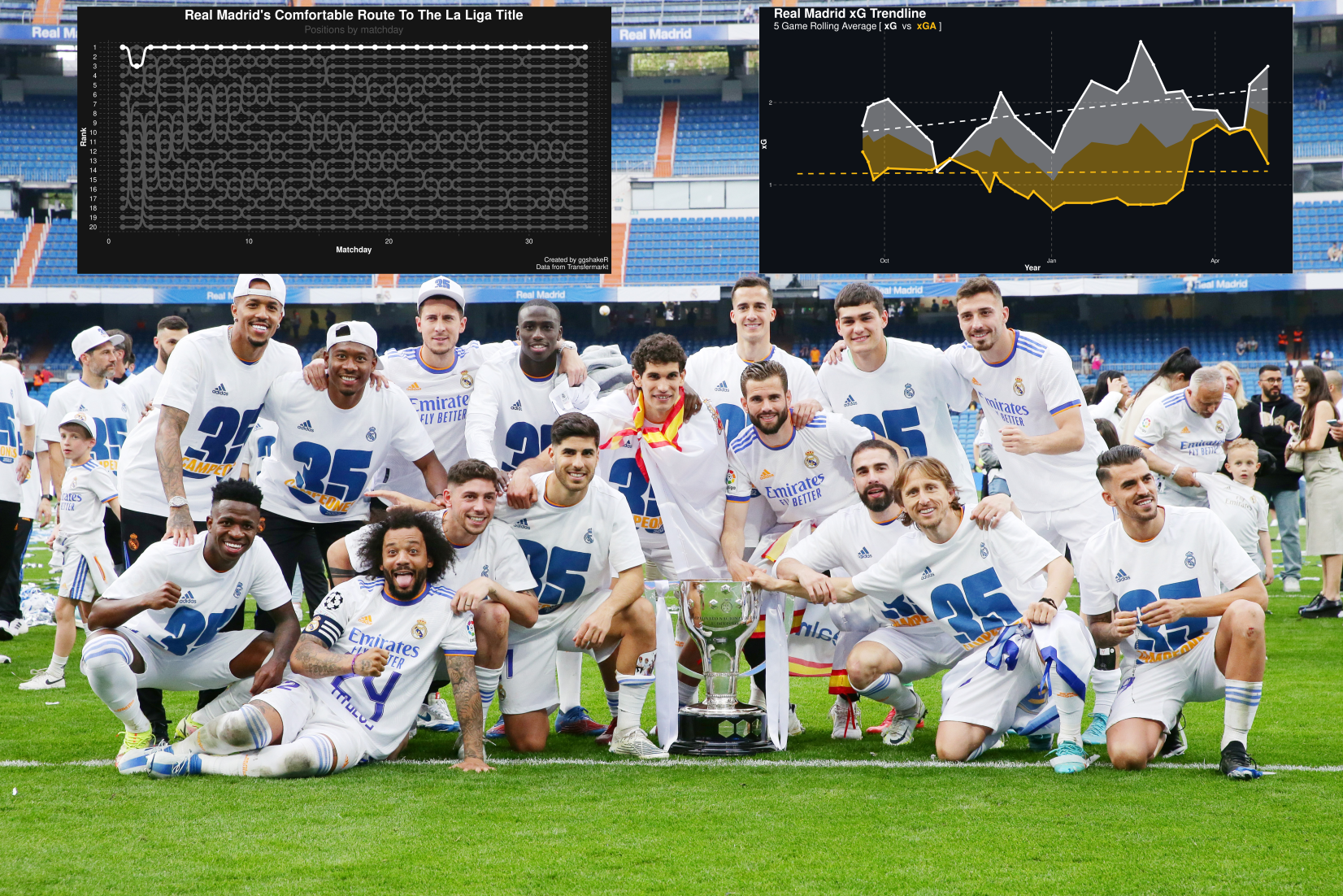 After a convincing 4-0 win against Espanyol, Real Madrid sealed their 35th La Liga title as Carlo Ancelotti became the first manager to win each of Europe’s top five leagues. This season certainly was not among the Italian’s best in his managerial career, but he was able to get his side over the line comfortably after relying heavily on the individual brilliance of his players.

Admittedly, Real Madrid’s comfortable La Liga campaign was a consequence of their traditional title rivals — Barcelona and Atlético Madrid — struggling for various reasons, but the fact that Los Blancos only spent one week away from the top of the table all season is quite impressive nonetheless.

Their underlying performances were not always so great, as their xG trendline is quite shaky and inconsistent throughout…

… but that did not matter because they had certain players in their side who could almost single-handedly get them through tough matches. The two names that first come to mind are Karim Benzema and Vinícius Júnior, but another man who has been equally important to Real Madrid’s title charge is goalkeeper Thibaut Courtois.

As the xG trendline shows, Real Madrid’s defence has been quite poor this season and conceded well over 1 xG per match on average, yet they have conceded ten fewer goals than they would have been expected to throughout the season based on this metric. Some of that is down to poor finishing from their opponents or some good fortune, but Courtois is responsible for preventing around half of those ten extra goals, as he has saved 4.9 goals over the course of the season based on the PSxG (Post-Shot Expected Goals) metric.

Indeed, he has been one of the best keepers in the league in terms of shot-stopping, which is no mean feat when playing for the champions.

The other two stars, of course, are Benzema and Vinícius. The former has been absolutely incredible this season, as he sits on top of both the goals and assists charts in La Liga with 26 and 11 respectively. He is also one of the main reasons why Real Madrid are still in the Champions League, as he helped his side overcome Paris Saint-Germain and Chelsea with a couple of hat-tricks in the round of 16 and quarter-finals.

Vinícius has not been half bad himself, as his 14 goals and nine assists place him second in the goal involvements rankings, obviously behind Benzema. The pair are also the best in the league as far as underlying attacking numbers are concerned, as the Frenchman has 22.3 npxG+xA and the Brazilian international has a tally of 18.0.

The two have clearly been at the forefront of the Real Madrid attack throughout the season, but the work of those behind them should not be forgotten. The veteran midfield trio of Luka Modrić, Casemiro and Toni Kroos show up quite impressively in the xGBuildup metric, which is used to measure the involvement of players in attacking moves outside of shooting and chance creation.

This is not to say that all is well in terms of personnel for Real Madrid, though, because they do have some holes in their squad that they should be looking to fill in the summer transfer window. Looking at their most-used XI…

…it becomes clear that they could use some reinforcements on the right wing. In defence, Lucas Vázquez has been used at his second-favourite position of right-back more than Dani Carvajal, who has often been injured or even willingly benched by Ancelotti for his poor performances. Undoubtedly, Real will be looking for a top-class right-back in the summer to use as a regular starter next season.

Alongside the deadly duo of Benzema and Vinícius in attack, Marco Asensio has spent the most time on the right. While he has managed to break into double digits in terms of league goals, only three of those have been game-state altering and his performances have often left a lot to be desired, so Real should be looking to find new players in this position too.

One interesting solution for next season involves the arrival of Kylian Mbappé, who would presumably slot in on the left wing. Therefore, the dislodged Vinícius could be used on the right wing, although it remains to be seen if he will be equally effective on that side.

Above all, though, concerns over Real Madrid’s individualistic footballing model continue to loom, especially after they were thrashed in the absence of Benzema in the most recent Clásico. For now, it appears that they will continue to operate this way, so we should get a more exciting title race in La Liga next season if Barcelona continue to operate at the level they have set under Xavi.