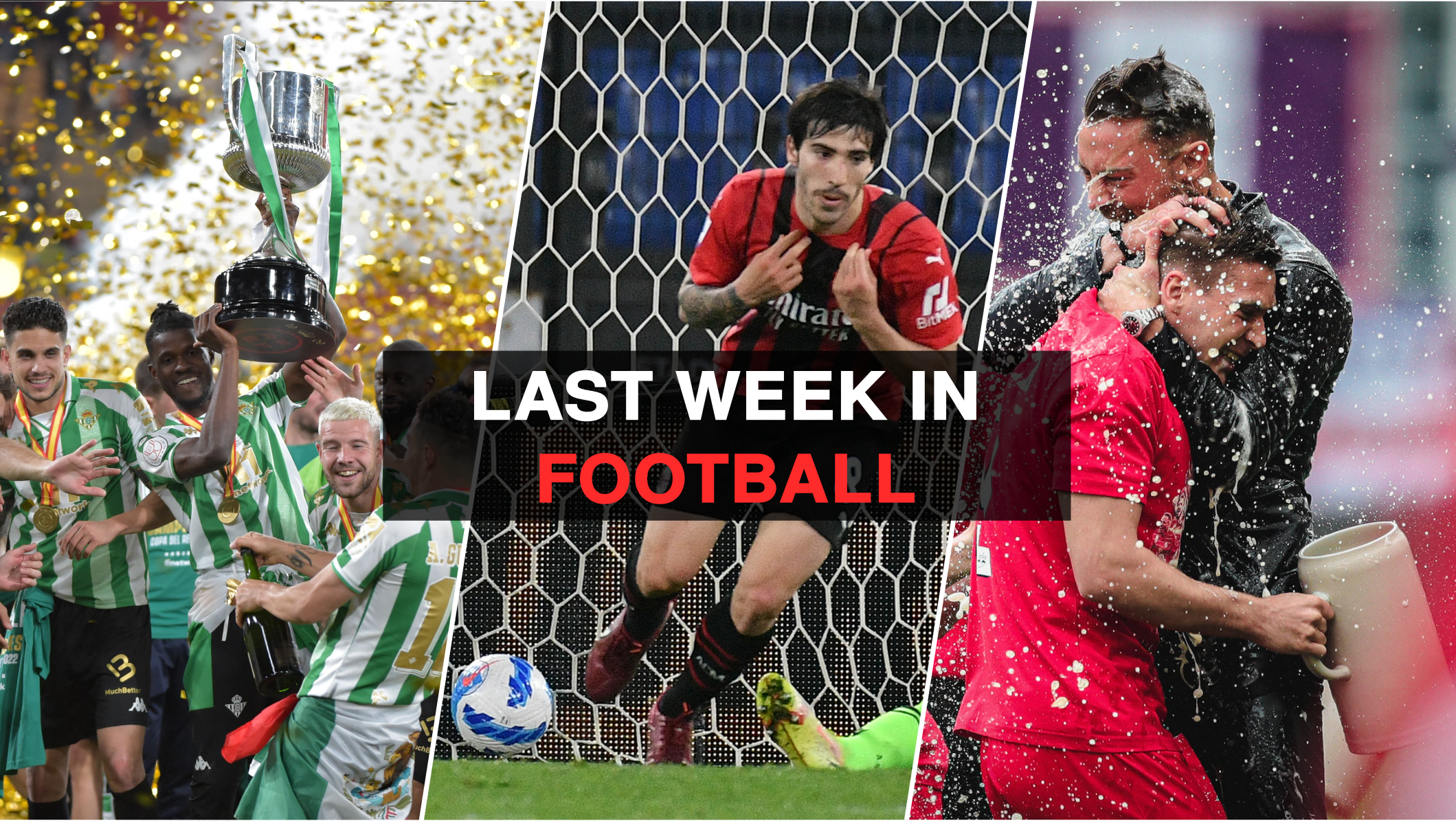 Titles were being won across Europe this weekend, as Real Betis, Bayern Munich, Paris Saint-Germain and Red Bull Salzburg secured additions to their trophy cabinets. We have already covered the successes of Bayern Munich and PSG, so we will focus on the other two and some important results elsewhere in this edition of Last Week In Football.

Most of the La Liga clubs had this weekend off because the Copa Del Rey final was being held in Seville. Real Betis had beaten local rivals Sevilla, Real Sociedad and Rayo Vallecano among others en route to the final, but most of the giant-killing was done by Athletic Club, who suffered heartbreak in the semi-final against Valencia.

The match got off to a perfect start for Betis who took the lead in the 11th minute through Borja Iglesias’ header, but Valencia equalised just before the half-hour mark as Hugo Duro lifted his finish above Claudio Bravo and into the back of the net. Both sides had chances to grab a winner thereafter, but they could not be separated even after extra time.

The cup was, therefore, set to be decided on penalties. Everyone was faultless from 12 yards out bar Yunus Musah, who missed the target with Valencia’s fourth effort, paving the way for Betis to lift what is just their fourth-ever major trophy.

The Serie A title race drama continued this weekend, and we now seem to be down to just two clear contenders. One of those are Inter, who comfortably defeated Roma 3-0 on Saturday night. Then, on Sunday, Napoli fell further away from the top of the table as they squandered a two-goal lead in the last ten minutes to lose to Empoli.

The final match of the weekend in Italy saw Milan visit Rome to play Lazio, and things did not start well for them as Ciro Immobile put the hosts in front in the first five minutes. Milan never really looked like equalising in the first half, but they came back strong in the second period and Olivier Giroud made it 1-1 in the 49th minute. They completed the turnaround in stoppage time, when Sandro Tonali poked in a crucial winning goal.

This win restores Milan to the top of the Serie A table with a two-point lead over Inter, who will be playing their game in hand against Bologna in midweek.

There is a lot to be decided in every part of the Premier League table as we enter the final stretch of the season, but there was a massive result in the race for the top four this weekend as Arsenal widened the gap between themselves and Manchester United to six points.

After beating Chelsea in midweek, the Gunners picked up where they had left off by opening the scoring in the third minute through Nuno Tavares. Bukayo Saka’s penalty made it 2-0 just after half an hour had been played, but Cristiano Ronaldo soon halved the deficit for the visitors.

The pivotal moment of the match came in the 57th minute when Bruno Fernandes’ spot-kick hit the outside of the post and went wide, preserving Arsenal’s lead. Granit Xhaka’s piledriver in the 70th minute sealed the three points for Arsenal, who stayed in fourth spot after Tottenham Hotspur’s goalless draw with Brentford.

After RB Leipzig’s last-minute win over Union Berlin in the DFB-Pokal semi-final in midweek, the two sides met again on Saturday, this time for a Bundesliga fixture.

This game followed an opposite trajectory to what happened in the cup, as Leipzig took the lead after looking the better side early on. Union came back strong thereafter, though, and they left it very late to turn the match around, as substitutes Sven Michel and Kevin Behrens got on the scoresheet in the 86th and 89th minutes respectively.

This result means that Leipzig drop back down to fourth place as Bayer Leverkusen beat Greuther Fürth fairly comfortably, but Freiburg will be even unhappier about the stoppage-time equaliser they conceded against Borussia Mönchengladbach as it keeps them two points adrift of the Champions League places.

The race for Europe also had twists in France, where last season’s champions Lille faced high-flying Strasbourg, who were looking to keep their Champions League dream alive. In an underwhelming game which saw next to no good chances fall to either side, Zeki Çelik scored an 87th-minute winner with his weaker left foot after arriving at the back post.

With Rennes, Monaco and Nice winning their matches, Strasbourg have dropped to sixth place and are three points away from the Champions League spots, while Lille are a further five points behind them in ninth. Although this was an important win for Jocely Gourvennec’s side, they still have much work to do if they are to end their turbulent season with European qualification because they are yet to face three of the top five.

The Austrian Bundesliga title was also sealed this weekend, as Red Bull Salzburg made it nine in a row with an emphatic win over Austria Wien. They have done so with four matches yet to be played despite the fact that every team’s points were halved in March when the league split into the Championship Group and Relegation Group.

After a slightly slow start to the season by their standards, things were all under control by November.

Their manager Matthias Jaissle has lifted his first-ever trophy as a coach with this success, and he will have the chance to get his second and complete Salzburg’s eighth-ever domestic double in May when his side face Ried in the cup final.