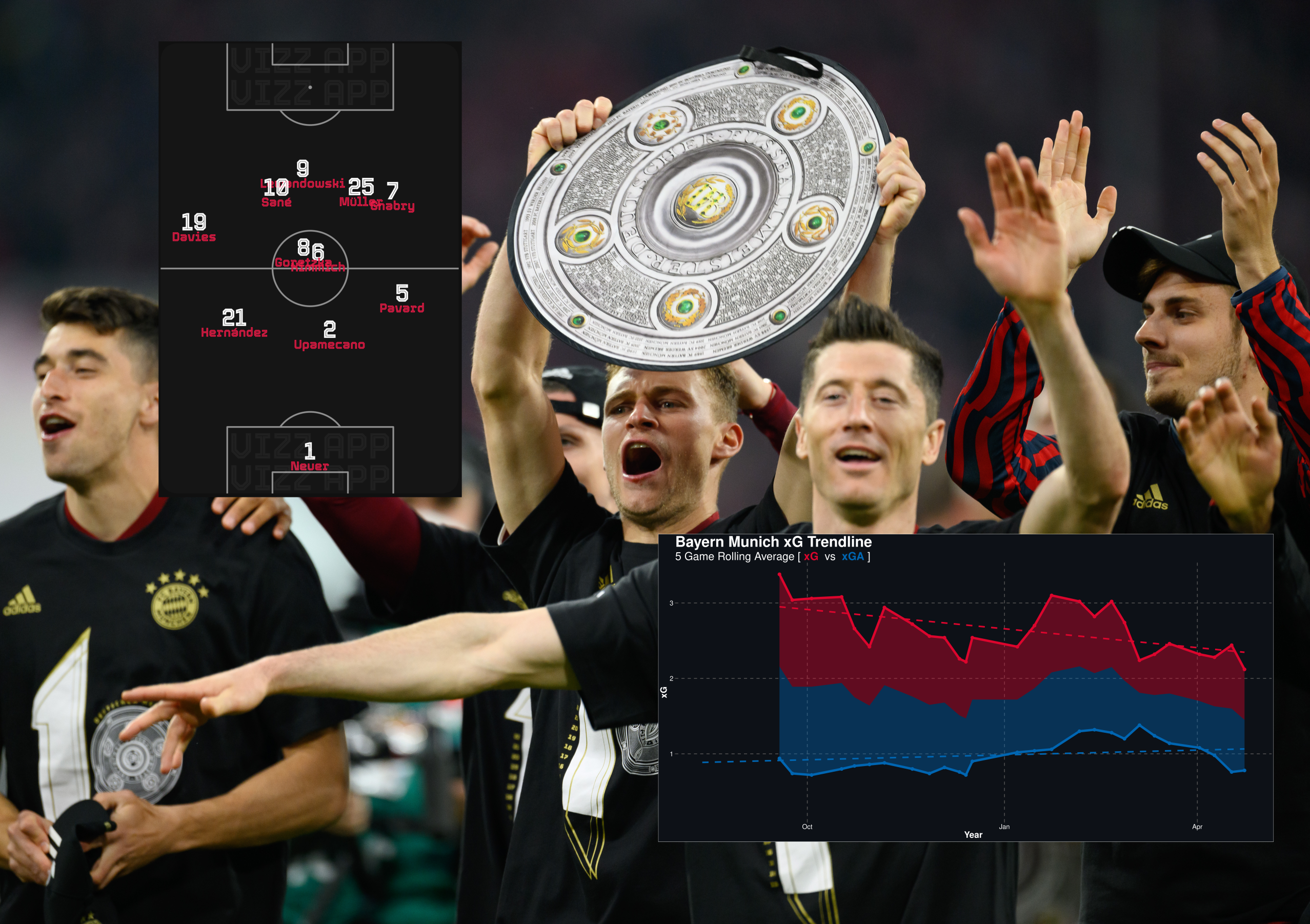 Yet, Bayern will not be entirely satisfied with how their season has gone. Domestic success for them is the bare minimum, but now they have nothing left to play for as they were eliminated from the Champions League quarterfinals by Villarreal, while their DFB-Pokal ended much earlier when Borussia Mönchengladbach put five past them in the second round.

These setbacks were certainly not undeserved in what has been a season of blips and inconsistency for Bayern Munich. To review all that, we must first go back to last summer when Julian Nagelsmann replaced Hansi Flick as the head coach as the latter moved to a managerial role for the German National Team.

Nagelsmann brought two Leipzig players along with him in the form of Dayot Upamecano and Marcel Sabitzer, while experienced defenders David Alaba, Jérôme Boateng and Javi Martínez said their goodbyes.

Overall, most of the squad that won a historic sextuple under Flick was still there, so Nagelsmann certainly had the resources to make his first season in Munich a very successful one.

He certainly was able to do so in the league, where Bayern first took the top spot on the fifth matchday and have been there ever since. They also maintained a healthy gap to Borussia Dortmund throughout, although this chart cannot depict that.

A better way to get an idea of what Bayern’s league season has been like is to have a look at their xG trendline since their competitors have clearly not been anywhere near their level.

Again, Bayern’s league season looks pretty stable, but there are certain signs of inconsistency. Their defence seemed to slightly drop off in the new year although it has recovered lately. More interestingly, their attack shows two blips and 2021 and a bit of a bigger drop-off around February and March.

This bigger drop-off coincided with the defensive slump and, of course, they were eliminated from the Champions League around the same time. When investigating the potential reason behind this, the only answer that pops up is that both Alphonso Davies and Leon Goretzka suffered long-term injuries. They were both out before the new year, but Bayern’s thinned squad was able to keep up for the first few matches before the congested fixture schedule began to take a toll on their performances.

Additionally, Bayern lacked squad depth, especially in Davies and Goretzka’s positions, and both of them did not seem to have a fixed timeline for their recovery, so Nagelsmann’s decision to stick or twist his tactical system to mask these problems was made even more difficult.

To understand that conundrum, we must first get a quick overview of how the ex-Hoffenheim manager set his side up to play this year. His most-used formation was a 4-2-3-1 which is what Bayern have worked with for over two-thirds of the league season so far, although they have also spent around 15% of their time with a back-three.

Since they average the highest possession in the Bundesliga by far with over 60%, what really matters is how they operate with the ball, and this stayed the same irrespective of the formation as Bayern created a 3-2-5 structure. When starting with a back-four, this would see the two full-backs take on very different roles in possession, as the left-back would push forward while the right-back would tuck in as a third centre-back.

This is clear in the average positions of their most-used XI, which shows Davies far forward on the left while right-back Benjamin Pavard is a lot deeper and narrower.

Nagelsmann did not have a like-for-like left-back senior replacement in his squad when Davies was injured, and since he did not want to change his system, he was forced to take some fairly risky decisions as the likes of Sabitzer and Kingsley Coman were used in this role.

In defensive midfield, the only other obvious option apart from Joshua Kimmich and Goretzka is Corentin Tolisso, who has a worrying injury record himself. Therefore, Nagelsmann was forced to shove square pegs in round holes here too, which he mainly did by dropping Jamal Musiala into a deeper role.

Unsurprisingly, when players played in unfamiliar positions, their performances suffered and consequently, the team did so too. The point is: Bayern must look to add squad depth in the summer transfer window if they want to avoid a repeat of this in the future.

The Rekordmeister have already lost the defensive core of Flick’s sextuple winners, and now might be a time to start planning for replacements of the attackers such as Robert Lewandowski and Thomas Müller. Both of their contracts are expiring next year, and although Müller looks likely to renew, Lewandowski’s future seems undecided. Replacing two players who have played a part in over 55% of your side’s league goals so far this season is no easy task, but Bayern will undoubtedly have to do that in the near future. Additionally, Serge Gnabry and Manuel Neuer’s contracts are also expiring in 2023.

Bayern Munich’s decade of Bundesliga dominance is obviously an incredible achievement, but the future has a good deal of tests in store for them. Everything will surely not be so straightforward in the next ten years.