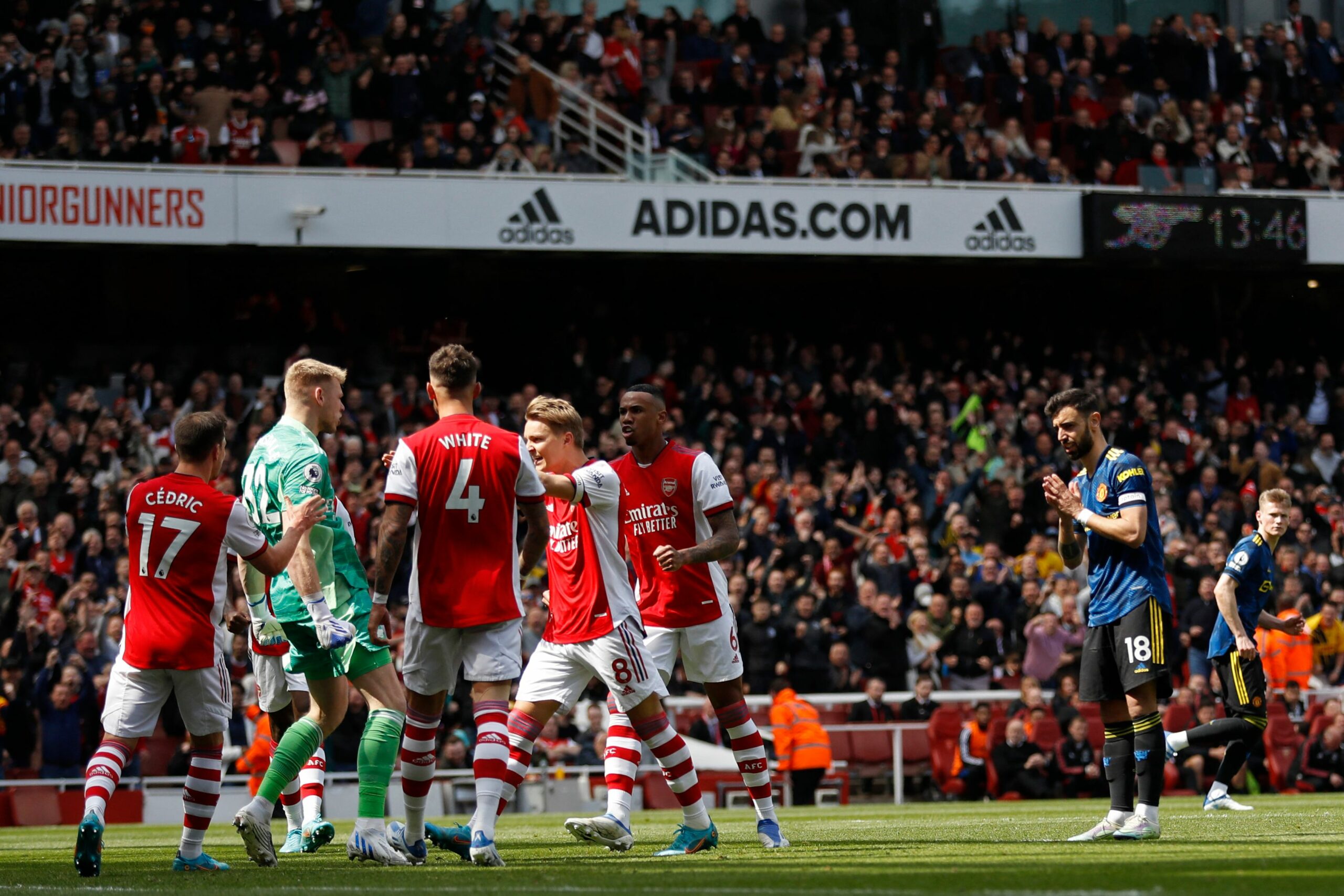 Arsenal’s Champions League hopes were given a massive boost as they defeated Manchester United to jump back into the top four.

The game started in explosive fashion, with the hosts taking the lead in the third minute. After Raphael Varane and Alex Telles failed to deal with Granit Xhaka’s cross, Bukayo Saka bent a shot towards the far corner. David de Gea got down well to keep it out, but was powerless to prevent Nuno Tavares’ rebound.

But Man Utd weren’t deterred by this, and came close to grabbing an immediate equaliser. Cristiano Ronaldo slipped Anthony Elanga through, but the young Swede could only fire straight at Aaron Ramsdale. From the resulting corner, Scott McTominay headed wide.

There was another opportunity for the Red Devils shortly afterwards when Ramsdale’s poor pass was cut out by McTominay. The ball fell to Bruno Fernandes, but Gabriel managed to get a crucial block in to spare his goalkeeper’s blushes.

The visitors had a penalty shout turned down after Cedric used his arm to dispossess Jadon Sancho. VAR had a look, but concluded that the full-back handled the ball accidentally.

Within a minute, both sides came desperately close to getting the next goal. Diogo Dalot struck a beauty onto the bar from distance, and Eddie Nketiah hit his shot straight at De Gea after being played through by Martin Odegaard’s clever flick.

Nketiah thought he had made amends for his miss just two minutes later when he finished after fine link-up play from Odegaard and Saka. However, replays showed that the striker was marginally offside, and the goal was ruled out.

But Man Utd’s relief was short-lived. In the build up, Telles was ruled to have fouled Saka. Referee Craig Pawson had a look at the monitor and pointed to the spot, before Saka confidently stuck away his penalty.

Moments later, Ralf Rangnick’s men halved the deficit. Nemanja Matic swung in a cross for Ronaldo, who muscled his way in front of Gabriel and converted on the half-volley for his 100th Premier League goal.

In first half injury time, both sides almost added to the scoreline. Telles’ longshot was kept out by Ramsdale, and De Gea beat Odegaard’s strike away.

Early in the second half, Man Utd were given a glorious chance to draw level when Tavares handled the ball from a corner. Fernandes stepped up and sent Ramsdale the wrong way, but rolled his penalty against the outside of the post.

The Red Devils continued to press for an equaliser, and almost got it on three occasions. Elanga had a shot saved, Ronaldo saw his volley ruled out for a tight offside, and then the Portuguese played Dalot through, only for his effort to be turned onto the post by Ramsdale.

The home side seemed to be on the ropes, until the pressure was relieved with a third goal. Mohamed Elneny won the ball off Fernandes and laid off for Xhaka, who unleashed a stunning strike into the bottom right corner to restore his side’s two-goal advantage.

Man Utd huffed and puffed to create more opportunities, but Arsenal’s defence was firmer this time around. The game finished 3-1, completing a fine week for Mikel Arteta.

The victory moves Arsenal back into the top four, although they will drop back down to fifth if Tottenham Hotspur win away at Brentford. As for Man Utd, their hopes of qualifying for the Champions League are looking very slim, as they sit six points off the top four having played a game more.

Aaron Ramsdale (7/10) – Made a couple of vital stops, most notably to prevent Dalot from netting an equaliser. Sometimes shaky with the ball at his feet.

Cedric (5/10) – Struggled up against Sancho. Lucky not to have conceded a penalty for a handball.

Ben White (7/10) – Held firm when under pressure. A decent display.

Gabriel (6/10) – Made one crucial block to deny Fernandes, but allowed Ronaldo to get the better of him for his goal.

Nuno Tavares (5/10) – Involved in everything. Got the opening goal, but sometimes let Elanga get away from him. Conceded a penalty.

Mohamed Elneny (7/10) – Won the ball for Arsenal’s third. Energetic and decent on the ball, but struggled at times in the second half.

Granit Xhaka (7/10) – Had an encouraging first half, but frustration started to show after the break. Settled the nerves with a glorious strike to make it 3-1.

Bukayo Saka (8/10) *MOTM* – Involved in all three of Arsenal’s goals, scoring one. Another fine outing for the youngster.

Martin Odegaard (7/10) – Ran the show in the first half. Quiet in the second.

Emile Smith Rowe (5/10) – An unusually quiet game for the Englishman. Substituted on 63 minutes.

Eddie Nketiah (7/10) – Battled hard and made things difficult for Man Utd’s centre-backs. Had a goal ruled out for a tight offside, but also missed a very good chance.

David de Gea (7/10) – Unlucky to end up on the losing side. Can’t be blamed for any of the goals, and made some good saves.

Diogo Dalot (5/10) – Lost Tavares for the opener. Unfortunate not to score, hitting the woodwork twice.

Victor Lindelof (6/10) – The only one of Man Utd’s back four not to make an error for Tavares’ goal. Looked alright at the heart of defence.

Raphael Varane (5/10) – Horribly mishit his clearance for the opener. Recovered reasonably well after that.

Alex Telles (3/10) – Absolute disaster of a performance in the first half. Failed to deal with Xhaka’s cross for the first goal, and conceded a penalty not long afterwards. Improved somewhat in the second half, but still not good enough.

Nemanja Matic (7/10) – A calm head on the ball. Produced an excellent cross for Ronaldo’s goal.

Anthony Elanga (6/10) – Got into some really good areas in the first half, but was wasteful. Probably should have netted an equaliser in the sixth minute.

Bruno Fernandes (2/10) – Missed a great chance in the first half. Missed a penalty in the second. Lost the ball for Xhaka’s goal. Could have been sent off. Did nothing positive of note. Catastrophic performance.

Jadon Sancho (6/10) – Caused Cedric plenty of problems, but didn’t do enough in the final third. Often a threat.

Cristiano Ronaldo (8/10) – Got himself another goal, taking him into the Premier League 100 club. Worked hard and linked up well.