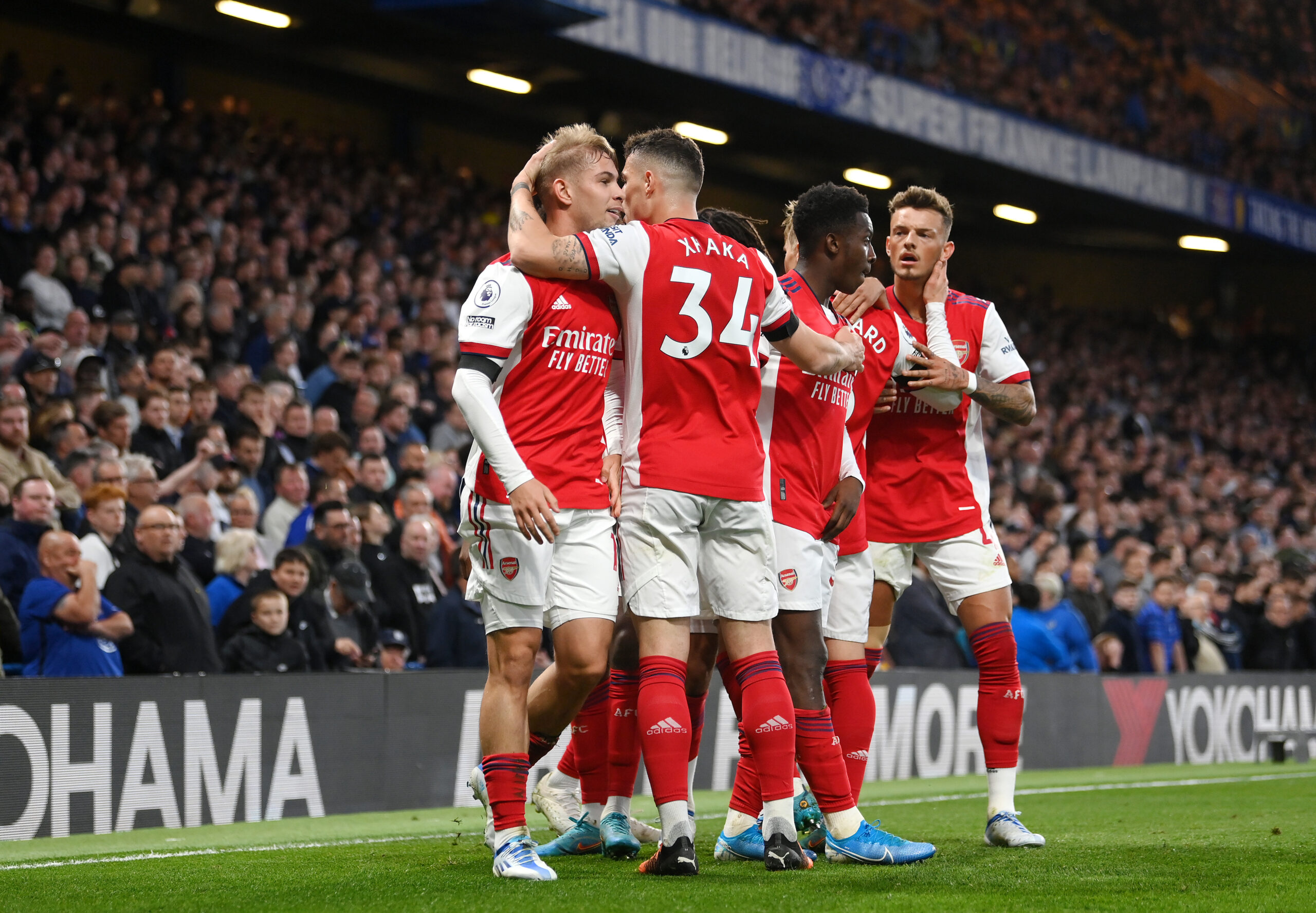 Arsenal bounced back from a poor run of form with a fine display at Stamford Bridge, defeating Chelsea 4-2.

The home side had the better of the opening minutes, coming close three times to breaking the deadlock. Marcos Alonso had a deflected shot hit the side netting, Mason Mount’s corner was headed off the line by Gabriel Magalhaes, and Romelu Lukaku struck wide.

So it came as a surprise when Arsenal got the opening goal. Eddie Nketiah raced onto Andreas Christensen’s horribly under-hit backpass, and the youngster confidently finished past Edouard Mendy

But that lead lasted just four minutes, as the Blues found an equaliser. Ruben Loftus-Cheek won the ball and found Timo Werner, whose shot took a huge deflection off Granit Xhaka and in at the near post.

The visitors weren’t deterred by this, and managed to get themselves in front again through Emile Smith Rowe. The England international brilliantly rolled into the bottom corner after a swift counter attack, with Martin Odegaard grabbing the assist.

Once again, however, Chelsea hit back almost immediately. Mount nicked the ball off Ben White and swung in a cross for Cesar Azpilicueta at the near post, and the captain finished like an experienced forward.

The Gunners continued to show plenty of threat, and nearly found a third goal before the break. Nketiah and Nuno Tavares fired wide, and Smith Rowe narrowly missed the target after some sensational footwork.

Down the other end, Alonso had an opportunity to put his side ahead when he latched onto Mount’s inch-perfect 40-yard pass, but he could only shoot over. The whistle went to bring an end to an exhilarating first half, with the scores level at 2-2.

Shortly after the break, Arsenal took the lead for the third time in the match. It was Nketiah again finding the net, poking past Mendy after a series of fortunate bounces.

The game slowed down in pace after that goal, with neither side creating a whole lot. Mikel Arteta’s side defended valiantly, and managed to limit their opponents to half-chances.

And in injury time, they sealed the three points when Azpilicueta was adjudged to have pulled down Bukayo Saka in the box. The winger picked himself up and slammed his penalty into the bottom right corner.

The victory put an end to Arsenal’s losing streak, having lost the three previous games. They now sit in fifth, behind bitter rivals Tottenham Hotspur on goal difference alone with six games to go. Chelsea remain in third place.

Edouard Mendy (5/10) – Faced four shots on target and conceded four goals. Not an ideal night, although he can’t really be blamed for any of the goals.

Cesar Azpilicueta (5/10) – Took his goal well, but also had a difficult evening defensively. Lost the ball in the lead up to Nketiah’s second, and conceded a late penalty.

Reece James (5/10) – Didn’t do enough at either end of the pitch. A disappointing display.

Andreas Christensen (4/10) – Really struggled against Nketiah and made a terrible error for the opener. Substituted at half time.

Malang Sarr (4/10) – An unconvincing display. Partially at fault for Nketiah’s second, and also fortunate not to receive a second yellow card for a foul on Cedric.

Marcos Alonso (5/10) – Contributed a fair bit going forward, but left plenty to be desired at the back – a sentence that aptly describes his entire career.

N’Golo Kante (6/10) – Made a few tackles and interceptions as you’d expect, but wasn’t particularly great on the ball. A mixed performance.

Ruben Loftus-Cheek (5/10) – Calm in possession at times, but didn’t do enough to influence the game.

Mason Mount (6/10) – Very involved in the first half, and produced the pass of the night to find Alonso in the box. Quiet after the break.

Romelu Lukaku (4/10) – Even in a wide open first half, he was anonymous. Missed his opportunity to stake his claim for a starting spot. Subbed off on 60 minutes.

Timo Werner (7/10) – Chelsea’s biggest threat. Got a fortunate goal, but continued to provide the danger for the Blues.

Aaron Ramsdale (5/10) – Dreadful goalkeeping for Werner’s equaliser. Recovered somewhat with his speed off his line, but rarely called upon to make a save.

Ben White (6/10) – Lost the ball in the build up to Azpilicueta’s goal. Aside from that, put in a solid display.

Rob Holding (7/10) – Looked off the pace in the first half, but was rock solid in the second. May have earned himself a regular starting spot.

Gabriel (7/10) – Made some key blocks and clearances, and consistently got the better of Lukaku.

Nuno Tavares (7/10) – Allowed Azpilicueta to get in front of him for the goal, which blemished an encouraging performance. Showed plenty of threat down the line with his pace and energy, although his shooting was wayward.

Mohamed Elneny (6/10) – Struggled a bit in the first half. Got better as the game went on.

Granit Xhaka (7/10) – Didn’t allow Kante and Loftus-Cheek to dominate the midfield. A good evening for the Swiss midfielder.

Bukayo Saka (8/10) – Caused plenty of problems for Alonso down the right. Deservedly got a goal at the end.

Martin Odegaard (6/10) – Added another assist to his tally, setting up Smith Rowe for Arsenal’s second. Did little else otherwise.

Emile Smith Rowe (8/10) – Had some lovely moments and finished his goal beautifully. A constant threat.

Eddie Nketiah (9/10) *MOTM* – A fantastic performance which surely ensures that he will keep his place in the starting XI. Bullied Chelsea’s backline and got two very well-taken goals.