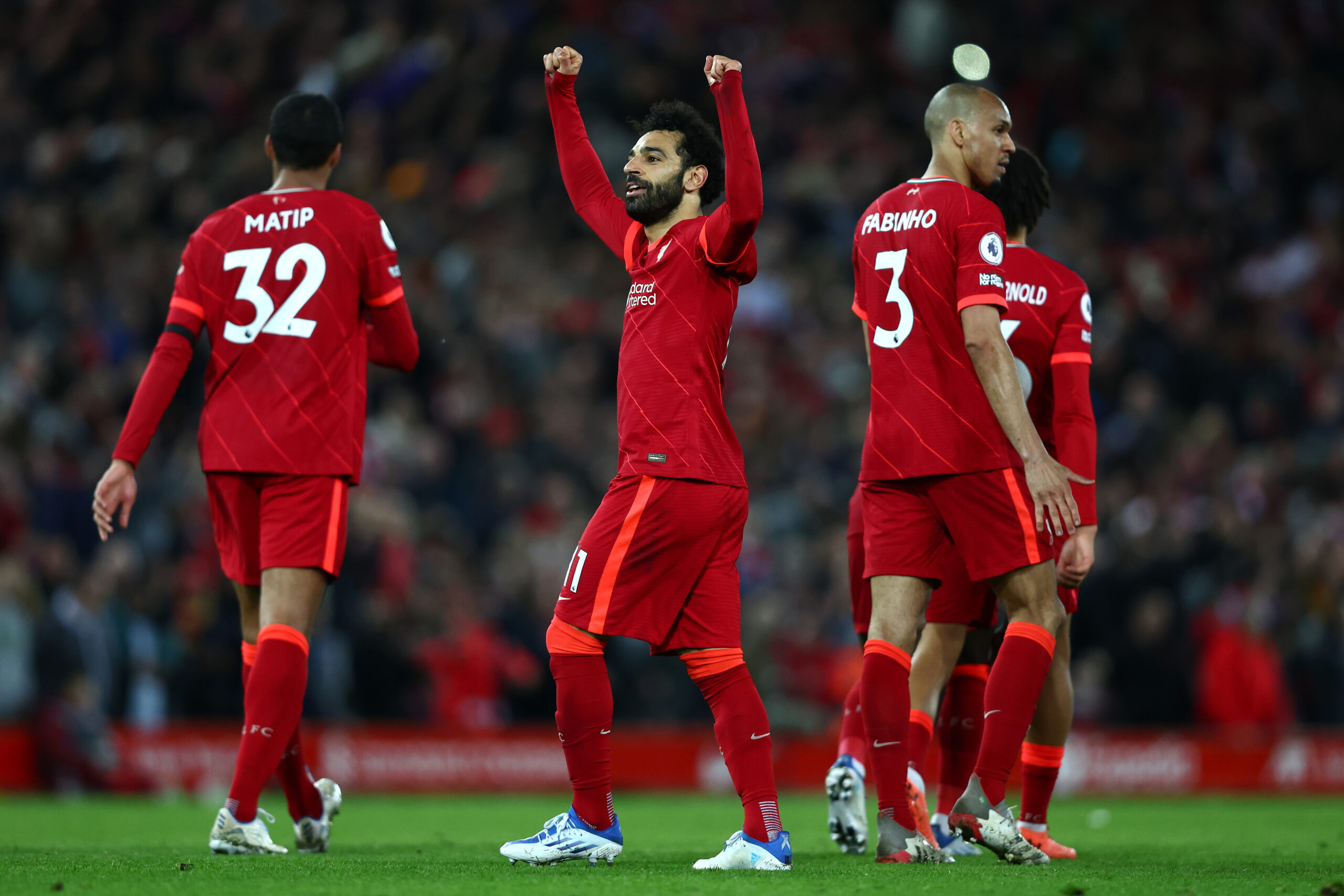 Liverpool demolished Manchester United for the second time this season to jump back to the top of the Premier League table.

The home side wasted no time in getting themselves in front, taking the lead after five minutes thanks to excellent work from their front three. Sadio Mane fed Mohamed Salah down the right, and the Egyptian rolled across for Luis Diaz to tap in.

And Salah went from provider to goalscorer not long afterwards. Diaz and Joel Matip combined to find Mane, whose brilliant chipped pass played Salah through on goal. The Premier League’s top scorer placed past David de Gea to double his side’s advantage.

It was a difficult half for Man Utd, who offered very little going forward. Their only opportunity came when Victor Lindelof floated the ball over the top for Marcus Rashford, only for the England international’s first touch to let him down.

After the break, the Red Devils began to show some threat. Rashford had another chance after being played through by Jadon Sancho, but Alisson kept his effort out. The forward was initially flagged offside, but replays showed that he was on.

Any hopes of a comeback were ended in the 68th minute when Liverpool grabbed a third. Andy Robertson won the ball high up the pitch and played the ball out wide to Diaz. The Colombian found Mane with his low cross, and he finished first time into the far corner.

And a joyous evening was complete with five minutes remaining when Salah got his 22nd league goal of the season. Substitute Diogo Jota found him with an excellent through ball, and the former Chelsea man lifted the ball over David de Gea with the help of a deflection off Aaron Wan-Bissaka.

The win takes Liverpool above Manchester City in the title race, although Pep Guardiola’s side will have the chance to jump back to the top tomorrow when they welcome Brighton and Hove Albion to the Etihad Stadium.

Alisson (8/10) – Called upon to make a key save from Rashford in the second half, but otherwise rarely tested. Always quick off his line and brilliant distribution.

Trent Alexander-Arnold (7/10) – Not as effective in the final third as usual, but constantly running. Defended well when under pressure.

Virgil van Dijk (7/10) – Given a fairly easy ride by Man Utd’s frontline. Aside from a couple of nervous moments at the start of the second half, did little wrong.

Joel Matip (8/10) – Came under little threat. Good on the ball and contributed to the second goal.

Andy Robertson (8/10) – Relentless running and determined fight. Won the ball high up the pitch in the lead up to the third and fourth goals.

Fabinho (7/10) – Composed and good on the ball. A solid performance from the Brazilian.

Jordan Henderson (8/10) – A step up following a few difficult weeks. Covered every blade of grass and dominated things in midfield.

Thiago (9/10) *MOTM* – Noticeably a cut above the rest. Controlled things from start to finish. Classy, confident, and hard-working.

Mohamed Salah (9/10) – Back among the goals with a fine brace. Also got himself an assist early on. A constant threat.

Sadio Mane (9/10) – Unlucky not to win MOTM, as he was utterly brilliant. Heavily involved in the first three goals while causing all sorts of problems for the Man Utd defence.

Luis Diaz (8/10) – Doesn’t look even slightly out of place in Liverpool’s star-studded attack. Another goal and assist for the January signing.

Diogo Jota (8/10) – Came on for 20 minutes, put himself about, and produced a world class through ball to assist Salah towards the end.

Naby Keita (4/10) – Played ten minutes, put in a horror challenge on Lingard that was somehow missed by VAR.

David de Gea (5/10) – Can’t have been expected to keep out any of the goals. Clearly not comfortable with the ball at his feet.

Aaron Wan-Bissaka (4/10) – Poor on the ball. Played an unfamiliar left-back role in the second half, and didn’t impress. Lost Salah for the fourth goal.

Victor Lindelof (3/10) – Terribly executed offside trap for the opener, and lost the ball for the third. Struggled to deal with Mane.

Harry Maguire (4/10) – The captain’s nightmare spell continues. Caught out of position for the first goal, leaving too much space in behind. Also couldn’t handle Mane.

Phil Jones (4/10) – Thrown in at the deep end and unsurprisingly looked off the pace. Substituted at half time as Man Utd changed system.

Diogo Dalot (2/10) – Catastrophic performance. All four goals came down his side. Lost Salah for both goals in the first half. Offered nothing going forward.

Nemanja Matic (3/10) – Completely overran. Clearly not a match for Thiago.

Paul Pogba (NA/10) – Substituted with an injury after ten minutes. Man Utd’s man of the match by default.

Bruno Fernandes (4/10) – Put some effort in, but created nothing. Perhaps lucky not to be sent off late on for a frustrated kick at Alexander-Arnold.

Anthony Elanga (4/10) – Did pretty much nothing of note. Anonymous.

Marcus Rashford (3/10) – Hardly got a touch on the ball, and still managed to squander two huge chances. Another poor display from a wildly out of form player.

Jesse Lingard (3/10) – Came on to replace Paul Pogba early on. Couldn’t cope with Liverpool’s midfield, and did nothing in attack.

Jadon Sancho (5/10) – Subbed on at half time. Had one lovely run which should have resulted in an assist, but did little else.