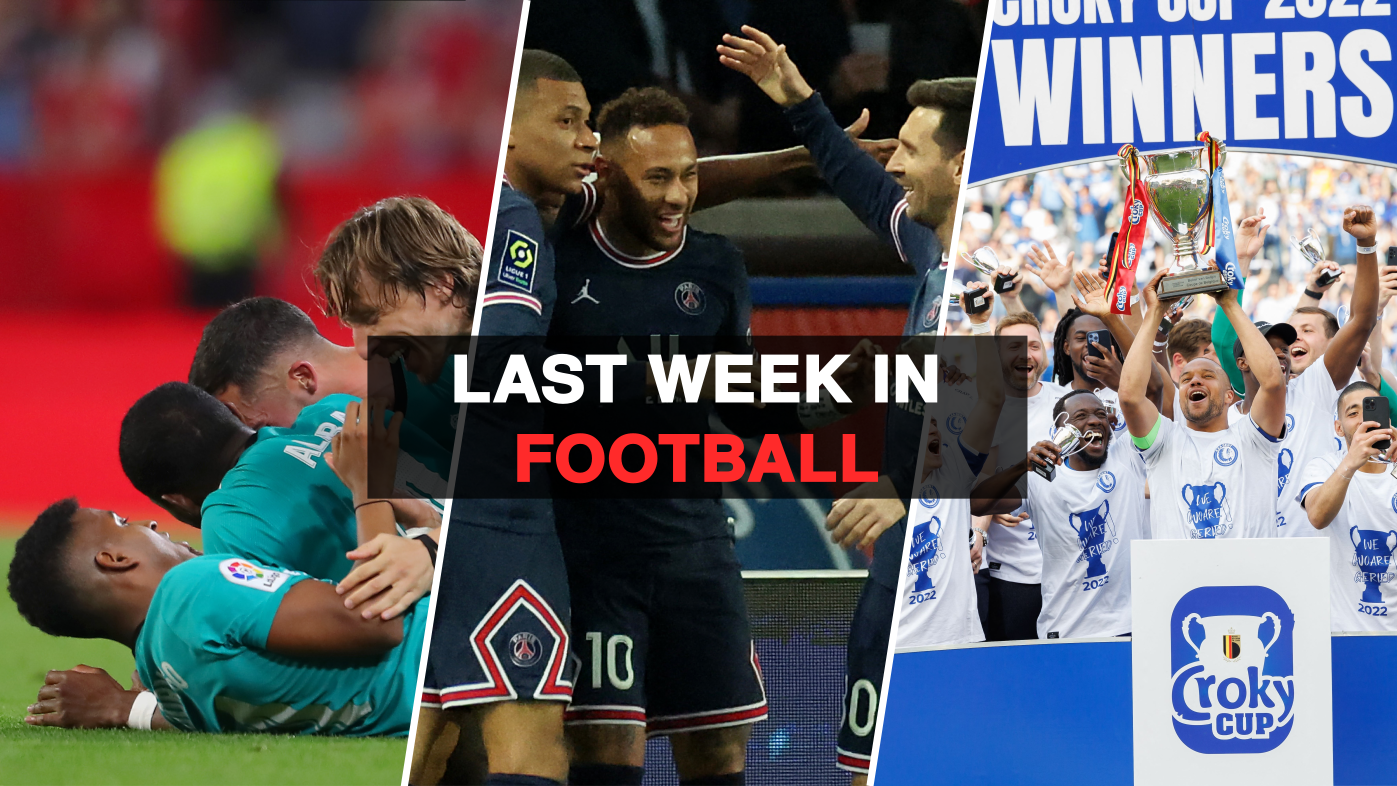 There was lots of title-deciding going on across Europe this week, both in leagues and cup competitions. In Spain and France, Real Madrid and Paris Saint-Germain scored statement wins which mean that their respective league titles are all but theirs, while there were cup finals in the Netherlands and Belgium. We will cover all that and more in this edition of Last Week In Football:

After their Champions League exploits against Chelsea, Real Madrid visited Sevilla in a tough clash at the top of La Liga. They knew that they could go 15 points clear at the top of the table with a win, although Barcelona would have played two games fewer at the time.

Things did not start well at all for Los Blancos, who were found themselves two goals down in under 25 minutes after a flat opening to the half. Second-half substitute Rodrygo made it 2-1 just a few minutes into the period, and Real suddenly had hope of a turnaround. Vinícius Júnior’s equaliser was ruled out for a very contentious handball call, but that did not matter in the end because Nacho made it 2-2 in the 82nd minute, before Karim Benzema won the game in stoppage time.

Besides all but delivering the title to his team, that goal takes the French striker to his best-ever tally of 25 league goals in what has been an incredible season for him.

There was a top of the table clash in France as well, where Paris Saint-Germain hosted Olympique Marseille in a fixture that is often referred to as Le Classique. 12 points separated the sides going into this game, and PSG knew that by widening that gap to 15, they would be left just one step away from the title.

The visitors sprung a tactical surprise as they defended with a back-five as opposed to the 4-3-3 that most expected, but PSG opened the scoring after getting in behind Marseille’s fairly high defensive line. After a spell of domination, though, the visitors equalised through a set-piece, but PSG retook the lead on the stroke of half-time after VAR gave them a penalty. Following a quiet second half, the hosts came away with all three points.

After this win, PSG can go on lift the Ligue 1 title in midweek if they beat Angers on Wednesday night, or if Marseille drop points against Nantes.

Just one week after an incredible end-to-end match at the Etihad Stadium, Manchester City and Liverpool went at it again at Wembley, this time with a spot in the FA Cup final on the line. City were forced to name a relatively weakened side after a couple of their star players went off injured against Atlético Madrid in midweek, while Liverpool rotated heavily against Benfica and kept their big names fresh for this game.

The Reds were the dominant side in the first half, as their high pressing caused lots of problems to City’s build-up. Second-choice goalkeeper Zack Steffen looked particularly shaky, and he was at fault for the second goal when Sadio Mané essentially tackled the ball off him and into the net. Prior to that, Ibrahim Konaté gave Liverpool the lead from a corner, and Mané scored a wonderful third to seemingly put the game beyond City’s reach at half-time.

Pep Guardiola’s side pulled one back within two minutes of the second half through Jack Grealish, though, and slowly began to dominate the game. Alisson made a massive save when Gabriel Jesus went through on goal around the 70th minute, so although Liverpool conceded again in stoppage time to Bernardo Silva, they managed to book a place in the final.

They will face Chelsea there in a repeat of this season’s Carabao Cup final, as the Blues beat Crystal Palace in the other semi-final.

In the previous edition of Last Week In Football, the Italian match that we focused on was Napoli’s loss to Fiorentina. That certainly was a big blow to their title hopes, but things got even worse for them this week.

They were hosting a Roma side that was unbeaten in 13 league games, but got off to a very good start in the first half. Less than ten minutes into the game, André-Frank Zambo Anguissa (who was back from suspension) was tripped in the box. Although the referee did not see anything in it initially, VAR convinced him to rethink his decision. Lorenzo Insigne stepped up to take the penalty and converted his eighth spot-kick of the season.

Roma came back strong in the second period though, and after consistent pressure, they finally equalised in stoppage time through substitute Stephan El Sheraawy. There was effectively no time left for either team to grab a winner, so they had to settle for a draw.

Having dropped points once again, Napoli are now four adrift of league-leaders Milan, but the gap to the top could go up to five for them should Inter win their game in hand.

Bayer Leverkusen’s slump continued in Germany, as they were narrowly defeated by a buoyant RB Leipzig side that had knocked Atalanta out of the Europa League in midweek. Domenico Tedesco named a heavily rotated side and sprung a few tactical surprises in the first half, but there was little to speak of in terms of chances.

He had a trump card up his sleeve, though, because he sent in-form forward Christopher Nkunku on for the second half. The Frenchman had an instant impact on the game, with his direct running causing all sorts of problems for the Leverkusen defence. He played a key role in the decisive goal too, as he set up Dominik Szoboszlai with a clever pass into the box.

That takes Nkunku, who is the only player to be in double digits in both the scoring charts and in terms of assists, to 30 goal involvements in the Bundesliga this season.

As for Leverkusen, their struggles without the likes of Florian Wirtz and Jeremie Frimpong are clearly continuing and this result leaves them with just a one-point cushion in the final Champions League spot following Freiburg’s convincing 3-0 win over Bochum.

It was cup final weekend in the Netherlands, where two managers who look set to leave in the summer were looking to leave with a bit of silverware. Roger Schmidt’s imminent departure has already been announced and it appears he will be going to Benfica, while Erik ten Hag is set to be announced as the next Manchester United manager.

The Dutchman’s team looked in control in the first half after surviving a brief spell of early pressure when PSV had a goal ruled out for offside. Ryan Gravenberch scored a wonderful opener in the 23rd minute, and Noussair Mazraoui further pleased the Bayern Munich recruitment team on the stroke of half-time, but his goal was ruled out by VAR.

PSV came out very strong in the second half and quickly turned the match on its head Erick Gutiérrez and Cody Gakpo scored in quick succession before the 50th minute. They resolutely held out against Ajax’s attacks (which included another goal ruled out by VAR) to lift the Dutch Cup for the tenth time in their history.

Ten Hag still has a chance to leave Ajax with one more trophy, as his side are four points clear at the top of the Eredivisie.

There was a cup final in Belgium too, where Gent were facing Anderlecht. Gent manager Hein Vanhaezebrouck had the bonus incentive of preventing his former employers from winning something, while Vincent Kompany had the chance to earn his first piece of silverware as a manager.

Gent were by far the better side throughout the match, as Anderlecht looked quite shaky at times and saw their defence tested repeatedly. There were no goals scored, though, so extra time was needed to decide the result. That half-hour followed a similar pattern of Gent doing everything but finding the back of the net, so the match went to penalties.

The first seven spot-kicks were converted, but Gent goalkeeper Davy Roef saved Josh Cullen’s effort after that. Captain Michael Ngadeu-Ngadjui had the chance to win it, but his effort was saved too. There was yet another twist in the tale, though, as what effectively was a sudden death attempt from Michael Murillo was kept out by Roef, meaning Gent won the cup on penalties.

That guarentees them a shot at qualifying for the Europa League next season, while Anderlecht will learn which competition they might play in next season after the Championship playoffs come to an end.