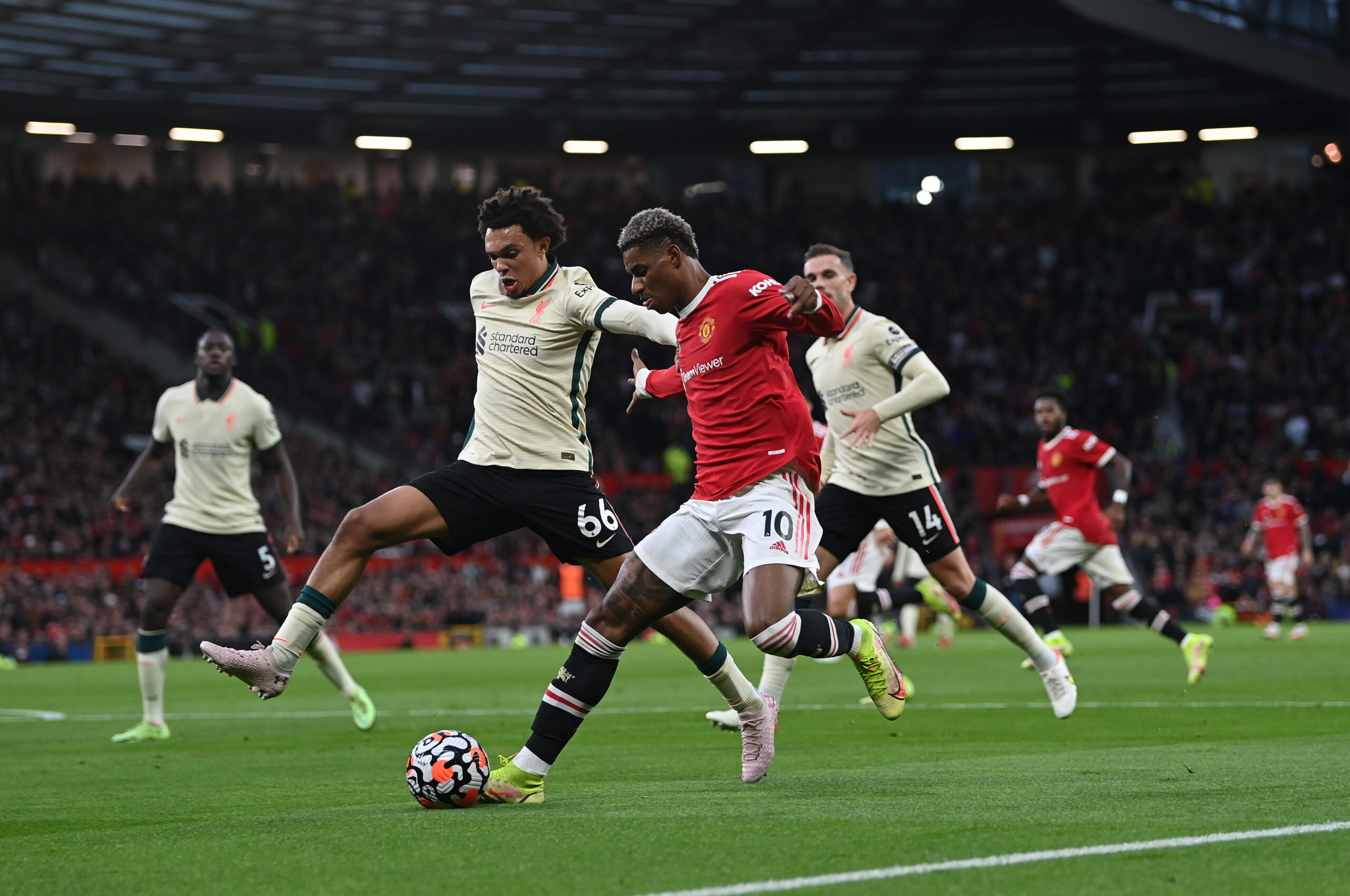 Historically, Liverpool and Manchester United are the two most successful clubs in England by a distance. They boast a combined total of 39 league titles, as well as nine European Cups.

But in the modern day, only one of these two is living up to that standard. Liverpool are one of the best teams in the world right now, and could be on course for an unprecedented quadruple.

In contrast, Man Utd have been well below standard since the retirement of Sir Alex Ferguson in 2013. After winning the Premier League 13 times under Ferguson, they haven’t even come close to touching the league title in nine years, and haven’t won any silverware at all since 2017.

But this doesn’t take anything away from the rivalry that these two share. It’s one of the biggest games in the English football calendar, and it ought to be a fascinating watch.

It’s been a memorable campaign for the Reds so far. Back in February, manager Jurgen Klopp got his hands on his first domestic cup in England, defeating Chelsea in the Carabao Cup final.

The Merseyside club have gone from strength to strength since then, and continue to push on for more success. Over the weekend, a brilliant first-half performance at Wembley against Manchester City took them through to the FA Cup final.

Meanwhile, they set themselves up for a Champions League semi-final against Villarreal, following their defeat of Benfica in the previous round. They are the favourites to progress to the final, although they cannot afford to underestimate their opponents.

And their league form has not suffered during their cup escapades. They are unbeaten in their last 12 Premier League matches, winning ten.

As things stand, the Reds are one point behind league leaders Man City with seven matches remaining. The form book is in their favour, but they will need to be near-flawless to get their hands on the title.

On paper, this game ought to be one of their toughest remaining fixtures. Out of Liverpool’s upcoming matches, only Tottenham Hotspur sit above Man Utd.

Nonetheless, they will still be heavily favoured to take all three points. In the reverse fixture, they cruised to an emphatic 5-0 victory, with Mohamed Salah getting a hat-trick.

Should they slip up, however, it will give Man City the opportunity to establish a commanding lead. The Cityzens have the kinder run in – Liverpool have very little margin for error.

Last season, Man Utd finished the campaign in second place. After bringing in Jadon Sancho and Raphael Varane, many expected them to compete for the title. After signing Cristiano Ronaldo, the trophy was not just a hope but a demand.

But the Red Devils have not lived up to those expectations. A string of poor results left them in seventh place after 12 matches, leading to the sacking of manager Ole Gunnar Solskjaer after three years in charge.

Ralf Rangnick came in on an interim basis, and hasn’t done much to turn things around at Old Trafford. The German has taken charge of 23 games in all competitions, and has won just ten while exiting the Champions League and FA Cup.

Despite this, they remain in with a chance of qualifying for the Champions League. The weekend’s results were favourable to the 20-time champions, leaving them three points off Tottenham in fourth.

Manchester United 5-1 Leeds United – Man Utd began the season with a visit from bitter rivals Leeds United. The sun was out, the fans were back, and it was an opportunity to see whether Solskjaer’s team really had what it takes to challenge for the title.

And at the time, it seemed like the answer was yes. The hosts put on a fine display, sticking five past the Yorkshire side.

The two at the heart of the victory were Bruno Fernandes and Paul Pogba. The former grabbed himself a hat-trick, while the latter registered four assists – the joint-most in a single Premier League match.

Manchester United 4-1 Newcastle United – If expectations weren’t already high enough before, they certainly were after this game.

Cristiano Ronaldo made his fairytale return to Old Trafford towards the end of August, and made his debut two weeks later. The hype around his homecoming was massive, and he did not disappoint.

The five-time Ballon d’Or winner bagged himself a brace, and strikes by Fernandes and Jesse Lingard put some gloss on the scoreline.

But it wasn’t all about the result. The feeling around Old Trafford was overwhelmingly positive. For the first time in a while, it seemed like the good times were about to return.

Perhaps this is what proved to be the killer for Solskjaer. He was now expected to be on the same level as Liverpool and Man City. Anything less was failure.

Tottenham Hotspur 0-3 Manchester United – After a fine start to the season, Man Utd’s form hit the buffers. They had picked up just one point from their previous four ahead of their visit to north London, with many believing that Solskjaer could be sacked if he fell to another defeat.

After the match, one manager was out the door. But Solskjaer kept his job, with Spurs boss Nuno Espirito Santo being ousted following a damaging 3-0 humbling.

Ronaldo opened the scoring, excellently volleying in from a tight angle from Fernandes’ pass. Then the forward turned provider, slipping in Edinson Cavani to make it 2-0. Marcus Rashford came off the bench to put the finishing touches on a fine performance, finding the far corner after being played through by Nemanja Matic.

Manchester United 3-2 Tottenham Hotspur – The reverse fixture came along five months later, with Spurs in high spirits. Antonio Conte had replaced Nuno, and put the Lilywhites in contention for a top four spot.

They will have felt unlucky not to have taken the three points from Old Trafford. However, there is little you can do when Cristiano Ronaldo is at his best.

The 37-year-old wasted little time in making his mark on the match, finding the top corner from 25 yards out after just 12 minutes. Harry Kane equalised from the penalty spot, but Ronaldo got his second before half time when he tapped in from Jadon Sancho’s square ball.

The away side piled the pressure on Ralf Rangnick’s men after the break, and levelled for a second time in the final 20 minutes. Sergio Reguilon fired a low cross towards the near post, and captain Harry Maguire diverted the ball into his own net.

But, of course, Ronaldo had the final say. The forward leapt highest to meet Alex Telles’ corner, and planted his header into the back of the net to wrap up his hat-trick and seal the three points.

Manchester United 0-5 Liverpool – It’s been a disappointing campaign for Man Utd, and this match was undeniably the lowest point. This was one of the most humiliating days in their history.

Liverpool set the pace early on, taking the lead when Naby Keita finished from Mohamed Salah’s through ball. After 13 minutes, it was 2-0, with Diogo Jota sliding in at the back post to convert from Trent Alexander-Arnold’s low cross.

Then Salah got in on the act, and added three more goals to his personal tally. Keita returned the favour for his earlier assist, finding the Egyptian with a cut-back, and then Jota teed him up just before half time. His hat-trick came early in the second half, as he raced onto Jordan Henderson’s excellent pass and poked past David de Gea.

There were no more goals, but there was still time for more misery for the home side. Substitute Paul Pogba was given a red card following a VAR check after a nasty challenge on Naby Keita.

Watford 4-1 Manchester United – Ole Gunnar Solskjaer was under immense pressure, and his reign finally came to an end after an embarrassing thumping at the hands of newly-promoted Watford.

The Hornets enjoyed an explosive first half, in which they could have been out of sight. Ismaila Sarr saw his early penalty saved, but the Senegalese winger later got himself on the scoresheet following Joshua King’s opener to make it 2-0.

Substitute Donny van de Beek pulled one back early in the second half to threaten a comeback. However, Man Utd’s hopes of securing something from the game were dashed when Harry Maguire was shown a second yellow card in the 69th minute.

There was more action in injury time, as Watford found the net twice more. Joao Pedro sealed the three points, and then Emmanuel Dennis hit a fourth from goalkeeper Ben Foster’s long ball.

Manchester City 4-1 Manchester United – Following the defeat at Vicarage Road, Man Utd managed to somewhat turn their fortunes around. Heading into their trip to the Etihad Stadium, they had lost just one of their previous 20 outings in all competitions – although only half of those games were won.

They gave a decent account of themselves in the first half, but went into the break behind. Kevin De Bruyne twice took advantage of some generous defending, netting either side of Jadon Sancho’s curling effort.

In the second half, Utd could barely get out of their own half. Man City dominated possession, and finally extended their lead when Riyad Mahrez’s deflected volley found the bottom corner.

From then on, the visitors could hardly get a touch on the ball, and seemed to completely give up. In the closing stages, Mahrez got his second and City’s fourth, completing a fine derby day victory for the home side.

David de Gea – There is an argument to be made that David de Gea doesn’t fit the profile to be a top goalkeeper in the modern era. He is an excellent shot-stopper, but other aspects of his game are regularly called into question.

However, there is no denying that he has been vital at times for Man Utd this season. Their backline has been calamitous for most of the campaign, and the Spaniard has had to be at his best to prevent a number of embarrassments.

Bruno Fernandes – In comparison to last year, it’s been a fairly underwhelming season from Bruno Fernandes. And yet, he has still put up impressive numbers.

In the league, the playmaker has nine goals – all from open play – and six assists. In addition, he has been the Champions League’s leading creator, registering a further six assists.

Cristiano Ronaldo – Much like De Gea, Ronaldo has also come under scrutiny for his performances. His goal record is admirable, but many believe that his all-round game is holding Man Utd back.

Despite this, it would be difficult to argue that he hasn’t been one of their best players this season. He is by far their top scorer in all competitions, hitting 21 goals – 12 clear of Fernandes in second.

Tuesday’s match is the beginning of a run of three difficult games for Man Utd. Next weekend, they face fellow Champions League chasers Arsenal at the Emirates Stadium, before a home clash with Chelsea.

Their final three fixtures are kinder, but still not easy. They play Brentford in their last home game of the season, and then travel to Brighton and Hove Albion and Crystal Palace.

These last three won’t be comfortable by any means, but it looks like they will have to take maximum points from these matches if they want to qualify for the Champions League. On the plus side, those opponents will have nothing to play for other than personal pride.