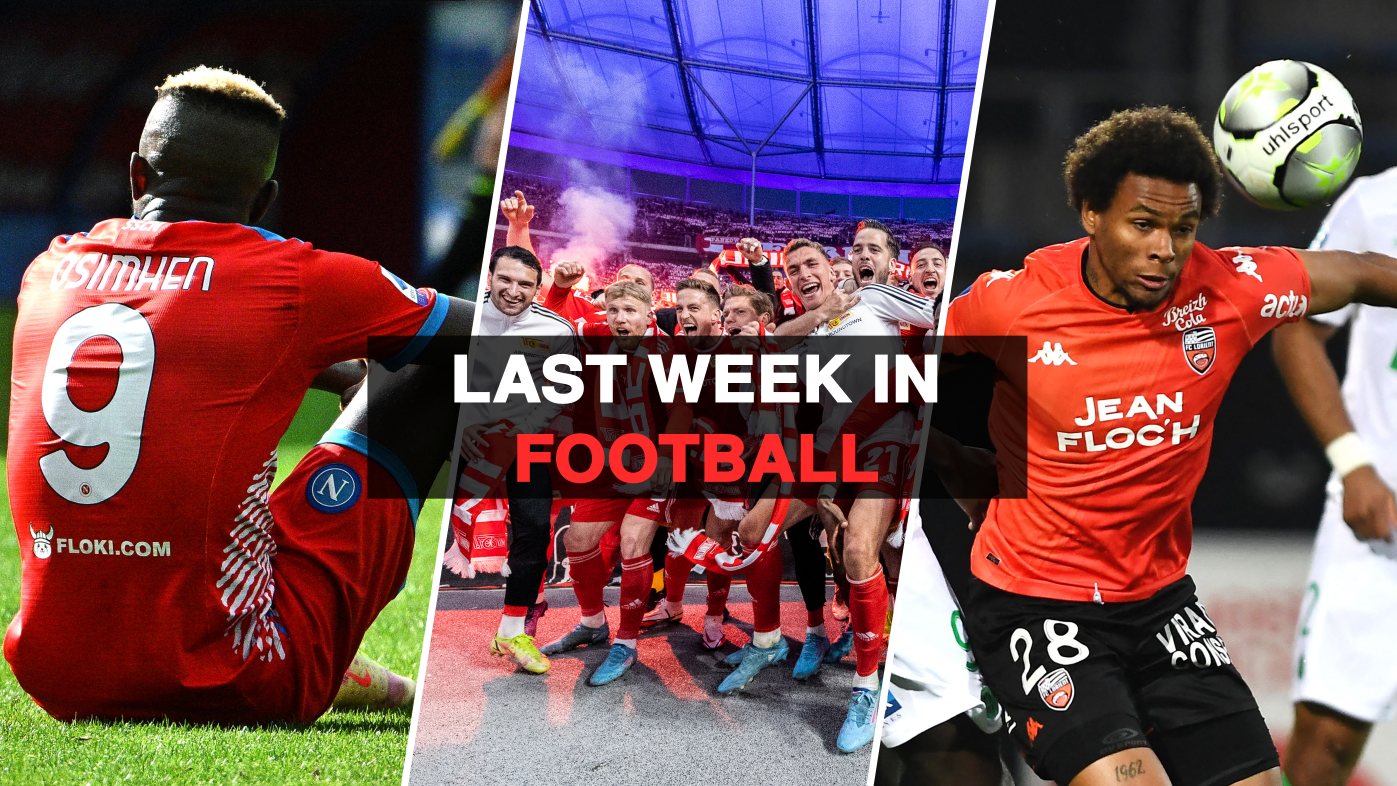 This edition of Last Week In Football features one of the most diverse selections of storylines from across the top five European Leagues, as we will be focusing on the title races in England and Italy, the scraps for European places in Germany and Spain, and the relegation battles in France, Germany and Spain. Among the matches we will highlight to do so are Napoli’s loss to Fiorentina, Union Berlin’s victory against local rivals Hertha and Lorient’s thrashing of Saint-Étienne.

Do we need to say much about this game? Just one point between the top two, and they produce one of the most entertaining games of football in recent memory. We are truly honoured to be watching.

This was also a big week for the title race in Serie A, as each of the top three faced tough opponents. Inter went first, and they got the job done comfortably against Hellas Verona with a 2-0 victory. Then, on Sunday, Napoli hosted a Fiorentina side that was unbeaten in their last five matches in the early kick-off slot.

The home side were missing key midfielder André-Frank Zambo Anguissa through suspension, which is why Fabián Ruiz was forced to play in an unfamiliar role on the right of midfield. Unsurprisingly, he struggled to perform at his usual level, getting substituted in under an hour. Consequently, Napoli failed to establish their control in the match.

Fiorentina took the lead in the first half, and although Napoli equalised through substitute Dries Mertens before the hour-mark, the visitors netted two more times before the last 15 minutes. Victor Osimhen’s late goal set the match up for a grandstand finish, but Napoli failed to salvage anything from it.

Later that night, Milan were held to a goalless draw by Torino, meaning that their local rivals Inter will now have the chance to go one point clear at the top of the table when they play their game in hand. They are currently level on points with Napoli, but ahead in the table thanks to a superior head-to-head record.

When Union Berlin were promoted to the Bundesliga for the first time in 2019, if you told someone that they would only face Hertha in the Berlin derby for three consecutive seasons in the top flight, no one would have been too surprised. However, if you continued and said that this would be because Hertha would get relegated, lots of eyebrows would be raised.

That is looking increasingly likely, especially after Union won in the Olympiastadion for the first time in the Bundesliga this weekend. They did so in some style too, putting four past their hosts and bouncing back emphatically after allowing Hertha to equalise in the 49th minute thanks to an own goal. This result keeps Union in a European spot, while Hertha remain in the direct relegation zone.

Had you shown this graph to someone three years ago, they would have asked you to check the colour coding.

As things stand, the only top-flight teams regularly visiting the Olympiastadion next season will be Union’s Europa Conference League opponents.

Over in France, four of the sides in the bottom five were playing one another this weekend, so the look of the relegation scrap was inevitably set to change. The bottom two were squaring off in Bordeaux on Sunday, but on Friday night, Saint-Étienne paid a visit to Lorient.

The match got off to a perfect start for Les Verts, who struck in the fourth minute and went on to double their advantage in the 22nd minute. Just three minutes before half-time, Lorient were afforded a lifeline as they won a penalty, which Terem Moffi duly dispatched. With seconds left before the referee blew his whistle, the hosts found an equaliser thanks to Ibrahima Koné.

Lorient picked up where they left off after a quarter of an hour in the second half, racing away to a two-goal lead in the 65th minute. Things went from bad to worse for the visitors who went a man down soon thereafter, and they conceded two more goals before the match ended.

With this win, Lorient stay 16th but now are four points clear of Saint-Étienne, who remain in the play-off spot but with just one point between them and Bordeaux, who beat Metz. After all of this, Lorient’s chances of getting relegated have gone down from 12% to just 3% according to FiveThirtyEight‘s model, so they might soon be able to start planning for another season in the top division.

After doing their best to restrict Manchester City in the lowest of low blocks in midweek, Atlético Madrid were given a taste of their own medicine by Mallorca, albeit not in as extreme a manner. Mallorca needed just 32% of possession to come away with a 1-0 win thanks to a second-half penalty after they defended resolutely in their 5-3-2 formation.

While this is a bad result for Atlético who are now just one point clear of Real Betis (whom we highlighted last week) in the last Champions League, this means much more to Mallorca, who had lost eight consecutive La Liga matches going into this one and had not kept a clean sheet since December. Those streaks have come to an end and they have leapfrogged Cádiz to jump out of the relegation zone for now.