Tactical Analysis: Manchester City got Liverpool right where they wanted them, but failed to take full advantage 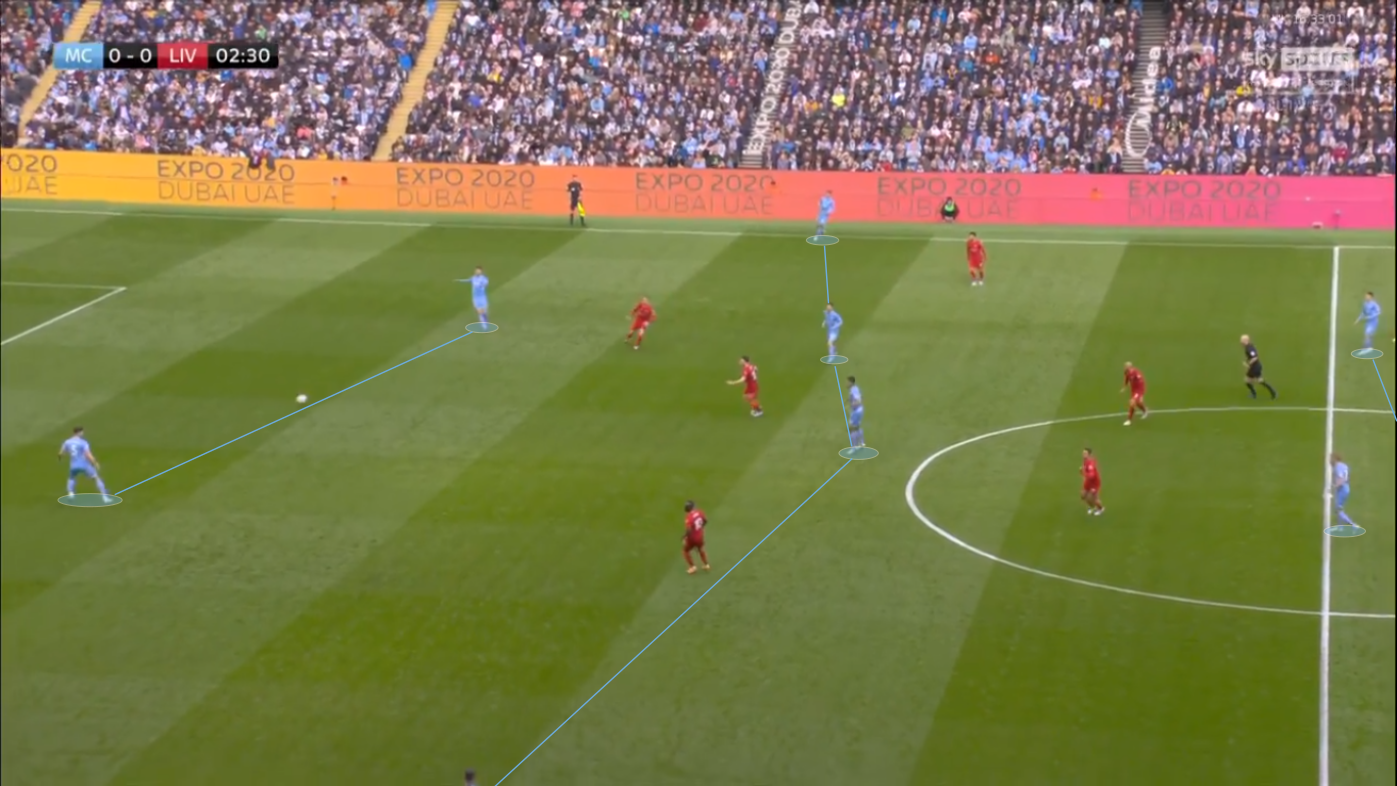 When the two best teams in the world meet, the match they play can often end up being a bit boring or cagey as the two sides respect and fear each other too much and are prepared to risk very little. That certainly has not been the case when Manchester City face Liverpool, though, as they have repeatedly produced classic fixtures.

We made the rather bold proclamation that the reverse fixture in the league this season was one of the best games of football you would ever watch, and their latest meeting was no less entertaining either. The stakes were even higher this time, as City led Liverpool by just a point at the top of the table with seven fixtures left after this one.

Both sides’ defences and midfield pretty much picked themselves, but there were decisions to be made up front. Pep Guardiola handed Gabriel Jesus his first league start since January while leaving Riyad Mahrez and Jack Grealish on the bench, and Jürgen Klopp opted to deploy Sadio Mané and Diogo Jota ahead of winter signing Luis Díaz and Roberto Firmino.

At first glance, everyone presumed Manchester City would be using their typical 4-3-3 formation with Kevin De Bruyne and Bernardo Silva on either side of Rodri, but this is where Guardiola had a trump card up his sleeve. He used Silva in a deeper role alongside Rodri, while De Bruyne pushed forward and looked to operate in the pockets of space behind the front line.

So, City used a 2-4-3-1 structure in possession, with the wingers staying quite wide and Raheem Sterling making runs in behind to stretch the Liverpool defence.

As is evident in the above image, there was a big gap between the front four and the rest of the side. Usually, this is not a good thing as it makes ball progression difficult, but Manchester City had a specific game plan here to counteract Liverpool’s incredible high press.

… before releasing the pressure with a long ball towards one of the wingers or even an overlapping full-back.

Apart from this one instance, all of Manchester City’s switches directed to the opposition half went from right to left. This was because Jordan Henderson was positioned much higher up out of possession than Thiago as he tried to follow Silva, so Trent Alexander-Arnold was often left alone to defend against Phil Foden and the overlapping João Cancelo.

One of the best ways to analyse how well a team executed their game plan in possession is to have a look at their passing network and see how well it reflects there. In that sense, Manchester City’s passing network from this match really is a work of art.

The average positions of the players almost exactly reflect the areas they operated in, and the strong connections between the back-four and two holding midfielders with a secluded front-four clearly showcase City’s tactic of circulating possession around the back and then going long.

Sterling’s absurdly advanced average position indicates that his primary job was to make runs in behind, and this backed up by the fact that he only had 18 touches in this match — by far the least he has managed in any of his Premier League starts this season.

The star of the show for City though was De Bruyne. He had a lot of freedom in his role to drift out to either side and overload the Liverpool defence, which he did brilliantly.

His passing and ball carrying in transition was magnificent once again, and he could quite easily have added to his goal with an assist had his teammates taken some of the wonderful chances he supplied.

Despite being tactically outdone, Liverpool deserve a lot of credit for bouncing back. Both of their equalisers came in under ten minutes of conceding, as they did not ever let their hosts settle into a rhythm after taking the lead. With that being said, Manchester City will feel that they had chances to score another goal, including Sterling’s marginal offside goal, Jesus’ saved effort when he could have cut the ball back to De Bruyne, and Mahrez’s failed late chip.

At the end of the day, though, both sides will take the draw. Liverpool marginally edged it on xG…

… but the true story of the game is better told by xT (Expected Threat), as City failed to convert a good deal of promising situations to chances.

For the neutral, a draw is obviously a perfect result as it keeps the margin for error for both sides down to zero with the gap at the top remaining just one point. Better yet is the fact that these two teams will be doing it all over again next week in the FA Cup semifinal, and will hopefully provide us with another exhibition of individual and tactical quality of the highest order.