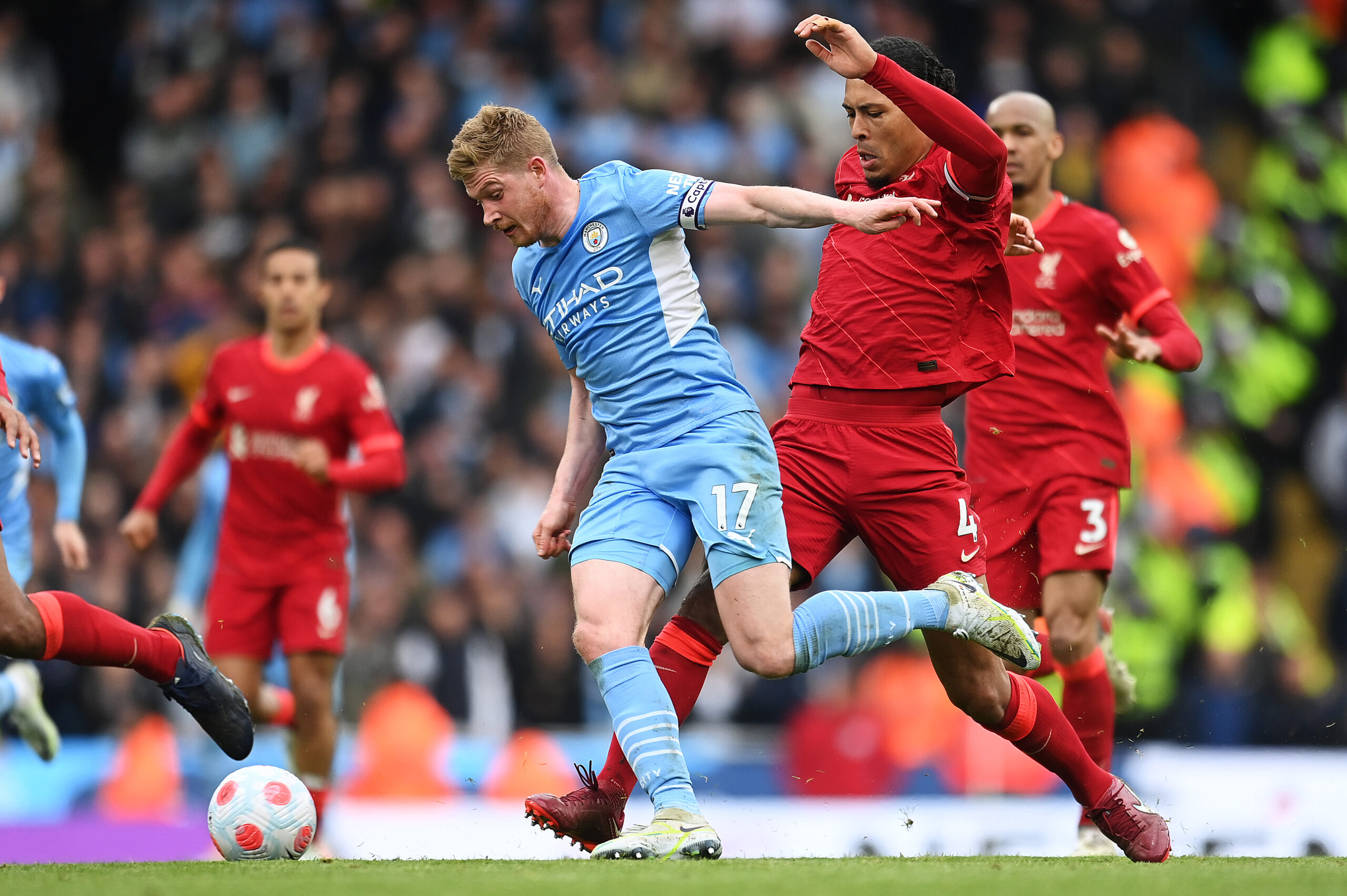 Manchester City and Liverpool played out an entertaining 2-2 draw, ensuring that the table remains the same going into the final seven games of the season.

Man City had the first chance of the game, and almost made the most of it. Kevin De Bruyne’s incisive pass found Gabriel Jesus, who squared to Raheem Sterling. But with the goal gaping, he could only fire straight at Alisson against his former club.

But the hosts managed to get in front just second later. De Bruyne picked up the ball in midfield, strolled past Fabinho, and fired a shot in off the post via a deflection off Joel Matip.

This lead lasted just eight minutes, as Liverpool hit back with their first attack. Andy Robertson crossed for Trent Alexander-Arnold, who volleyed a low cross to Diogo Jota for a tap-in.

But this didn’t deter Man City, who continued to dominate. De Bruyne struck narrowly wide on the turn, and Joao Cancelo hit the side netting after cutting inside.

And their pressure told, as they retook the lead before half time. Cancelo picked out Jesus with a cross, and the Brazilian turned it in off the bar.

With the break approaching, the Reds had a glorious chance to grab another equaliser. Jordan Henderson rolled the ball through for Jota, but the forward hesitated and allowed Aymeric Laporte to make a fine recovery tackle.

Immediately after the start of the second half, Jurgen Klopp’s men got themselves level. Mohamed Salah’s excellent pass found Sadio Mane, who expertly dispatched into the top corner.

The visitors had the momentum, and could have taken the lead in the 52nd minute. Salah fed Jota, but his effort was saved by Ederson.

Man City thought they had got themselves in front for the third time when Sterling rolled through Alisson’s legs from De Bruyne’s through ball. However, VAR intervened, with replays showing the England international to be marginally offside.

Both sides pushed for a winner, but clear-cut chances were hard to come by. Salah had a shot deflected just wide, and Jesus hit the side netting from a tight angle.

In the final minutes, substitute Riyad Mahrez twice came close to nicking a crucial winner. First, he blasted his 30-yard free kick against the outside of the post.

Then in the dying seconds, he raced through on goal from De Bruyne’s pass. However, he overhit his attempted dink, chipping into the stands. That was the last chance of the game.

The draw perhaps suits Man City more than Liverpool. They remain top of the table with seven matches remaining, just one point ahead of their opponents.

Ederson (5/10) – Arguably could have done better for Jota’s goal. Didn’t make any saves of note, and occasionally looked shaky.

Kyle Walker (6/10) – Dealt with Liverpool’s threat down his side most of the time, and his recovery pace was necessary. Lost Mane for the equaliser in the second half.

Aymeric Laporte (7/10) – Also wasn’t at fault for the goals. Made one vital challenge just before half time to deny Jota.

Joao Cancelo (7/10) – Put in a brilliant cross to assist Jesus. Showed plenty of threat going forward, but sometimes had a tough time against Salah.

Rodri (7/10) – Controlled the midfield in the first half. Didn’t have it so easy after the break, but never struggled.

Bernardo Silva (7/10) – Calm on the ball as ever and played some wonderful passes from deep. Could have maybe been a bit more incisive.

Kevin De Bruyne (8/10) *MOTM* – Got a rather fortunate goal, but continued to have an impact throughout the game. Unlucky not to have had a couple of assists to his name.

Riyad Mahrez (6/10) – Very unlucky with a late free kick. Should have done better with a chance in the closing stages.

Alisson (6/10) – Couldn’t do much for either goal. Made a decent save from Sterling early on.

Trent Alexander-Arnold (6/10) – Got himself another assist, but also let Jesus get away from him for the second goal. Showed some of the quality of the ball that we’ve come to expect from him.

Virgil van Dijk (5/10) – Unusually nervous in the first half. Came under less threat after the break.

Joel Matip (7/10) – Unfortunate with the deflection for De Bruyne’s goal. Didn’t do a whole lot wrong.

Andy Robertson (6/10) – Put in a good cross in the lead up to Jota’s goal. Sometimes had problems against Jesus, but didn’t get overrun.

Fabinho (5/10) – Worst player on the pitch in the first half, and should have done more to stop De Bruyne for the opener. Somewhat recovered in the second.

Thiago (6/10) – Composed on the ball and got involved. Perhaps lucky not to be given a second yellow card late on.

Mohamed Salah (7/10) – Anonymous in the first half. Came alive after the break, getting himself a wonderful assist for Mane.

Sadio Mane (7/10) – Also quiet in the first half. Took his goal very well, and showed plenty of threat afterwards.