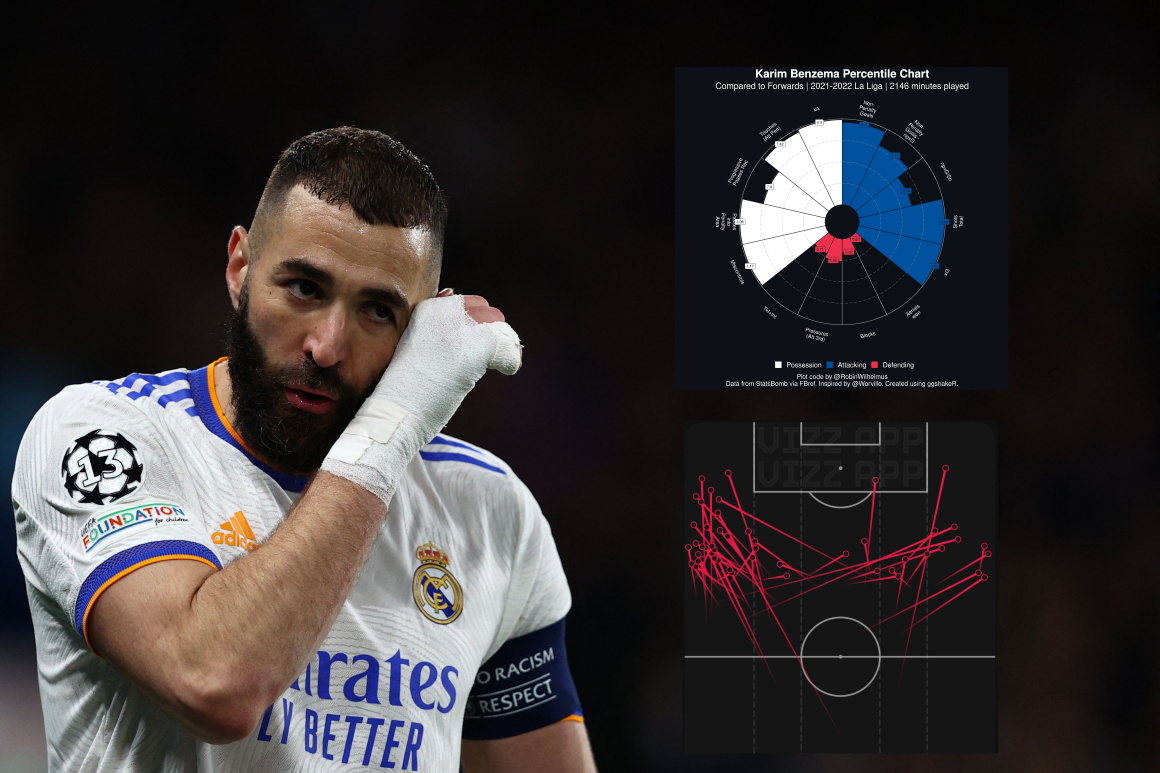 Benzema joined this extremely exclusive club after putting three past Paris Saint-Germain in the Round of 16 second leg, before repeating the trick in the first leg of the quarterfinal against Chelsea. In the process, he scored all sorts of goals — deft finishes from close range, powerful headers, tap-ins after forcing a mistake from the opposition keeper, you name it.

He has been doing this for a long, long time. In fact, Benzema has scored at least one goal in every Champions League season since 2005/06. Since his move to Real Madrid in 2009, the French international has scored over 300 goals for Los Blancos, recently moving up to third in their all-time scoring charts.

While Benzema has never had an incredibly explosive goal-scoring season, he has been very consistent throughout his time in Spain. The Frenchman has certainly upped his game following Cristiano Ronaldo’s departure in 2018, bagging over 20 La Liga goals in every season thereafter.

His finishing has been similarly consistent in that period of time.

Despite all this, Benzema has never finished in the top 15 of the Ballon d’Or standings. Admittedly that award is not the best at measuring a player’s quality, but it does give a good idea of a player’s popularity, so it is safe to say that the ex-Lyon striker has been quite underrated throughout his career.

It should also be said that Benzema has taken things to another level this season. He has been the best forward in La Liga by far, topping both the goals and assists charts with 24 and 11 respectively. His tally of 35 goal involvements is the most he has ever managed in a single league season, and there are eight matches yet to be played.

Benzema is not only an exceptional goalscorer but also equally good at creating chances for his teammates. This is clear in the fact that he is in the 99th percentile among La Liga forwards this season for both xG and xA.

Here is a scattergram that illustrates just how good he has been:

We should also quickly mention Arnaut Danjuma, who has enjoyed a wonderful debut La Liga season with 11 goal involvements and was also causing a stir in the Champions League by helping Villarreal beat Bayern Munich while Benzema was facing Chelsea.

What makes Benzema really special is that besides his elite level of goal contributions, he is also equally adept at dropping deep and linking up with his teammates. His touchmap from the current league season highlights that.

The above touchmap shows a clear left-side bias in Benzema’s game, which can be explained by his superb connection with left winger Vinícius Júnior they have combined for more goals than any other duo in La Liga this season.

In fact, Benzema finds the Brazilian winger over twice a match on average with a pass into the final third.

The French striker has assisted over a third of Vinícius’ 14 goals in the current La Liga season. Celta Vigo were given a perfect demonstration of how the duo can open teams up, as Benzema dropped between the lines on the left half-space before threading a pass in behind the defence for Vinícius,…

… who coolly beat the keeper one-on-one.

While Benzema’s defensive statistics do not stand out this season, that is primarily due to Carlo Ancelotti’s style of play. Even at 34 years of age, the Frenchman always works hard out of possession for his team, and his first goal against PSG and last goal against Chelsea show that he can draw mistakes from even the best keepers in the world.

Sometimes the easiest way to understand how important a player is to their team is to watch how the team performs without them. In Real Madrid’s case, they were forced to conduct this unfortunate experiment when he was out injured for the latest El Clásico, and it ended badly, to say the least.

On the back of what already is his best goalscoring season, Benzema easily is one of the world’s very best strikers at the moment, and he is showing no signs of slowing down. His all-round game has only improved since he has crossed the age of 30, and he has proven himself as a genuinely lethal finisher of late.

With strong speculation that Real Madrid might add another elite forward to their ranks to complement Benzema and Vinícius, stopping the French international might get even harder next season.