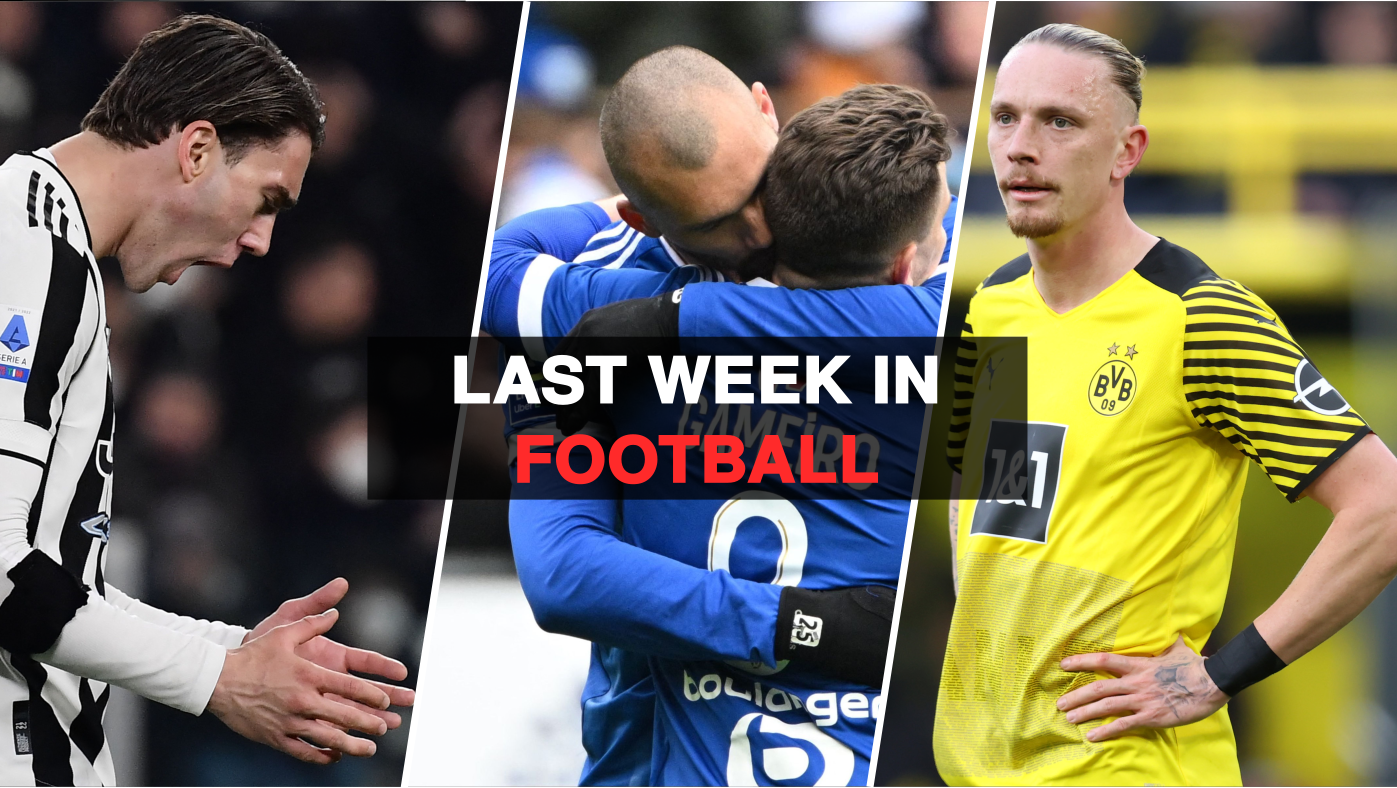 The courses of multiple title races changed this week, as contenders fell back in Italy and Germany, while the top two squared off in Scotland.

European battles also raged on in the top leagues, with Chelsea getting battered by Brentford in England and Strasbourg securing an important win in Ligue 1. We will be covering all of that and more in this edition of Last Week In Football.

The Derby D’Italia certainly was the headline fixture of the weekend, and it provided a very consequential result. Although Inter’s performance was not of the top standard, they came away with all three points after lots of penalty drama late on in the first half which culminated in Hakan Çalhanoğlu converting the retake.

That pretty much was the only noteworthy chance Inter created all match, but Juventus’ inability to score from any of their 22 attempts means that they are now eight points away from league-leaders Milan, who drew with Bologna on Monday night.

Inter are four points away from their local rivals, but they do have a game in hand so their title hopes certainly remain alive, especially after this big win. Napoli are the other major contender, and they are currently sitting in between the two capital clubs having won a difficult match against Atalanta earlier on Sunday.

In the last edition of Last Week In Football, we highlighted Dortmund’s draw against Köln and how that result further widened the gap at the top. If the title race did not end there, it certainly did this weekend.

Domenico Tedesco’s impressive RB Leipzig have been the best side in Germany in 2022 as far as points are concerned, losing just one match in all competitions (which, of course, was against Bayern Munich). Since his arrival, Leipzig have shot seven spots up the Bundesliga table and gone from being in the bottom half to now assuming a commanding position in the race for Champions League football next season.

Tedesco’s side have generally employed a possession-based style of football, but against the top sides, they are happy to sit back and soak up the pressure. That is exactly what they did against Dortmund, as they allowed their hosts to keep nearly two-thirds of possession, but hurt them very hard on the break and scored with four of their five shots on target.

The clinicality of Christopher Nkunku in the final third was also key as he made a telling difference on the scoresheet. With a goal and two assists, the French international crossed 25 goal involvements in the league season and is second in that regard only to a certain Robert Lewandowski.

Bayern’s 4-1 win over Freiburg earlier on Saturday was an important result for both Dortmund, who are nine points off the top spot now, and Leipzig, who have a three-point cushion in fourth. Die Roten Bullen will now set their sights on chasing down Bayer Leverkusen, who are also three points away from them in third.

The biggest upset of the weekend came in the Premier League, where Chelsea conceded four goals against a buoyant Brentford side who have further alleviated relegation fears after this statement victory.

After a goalless first half, Chelsea opened the scoring through Antonio Rüdiger’s long-range screamer but within 12 minutes after that, Brentford scored thrice as Vitaly Janelt bagged a brace and Christian Eriksen scored his first goal for the Bees. Yoane Wissa added a fourth towards the end of the game to seal the result for good.

With this win, Brentford have an 11-point gap to 18th-placed Watford, so their survival in the Premier League should be considered almost assured. Chelsea, meanwhile, are nowhere near the title race but may have to start looking behind as they only have a five-point lead over an in-form Tottenham side that is currently fifth after thrashing Newcastle United 5-1.

The race for the Champions League spots in France has become even tenser after this weekend’s results, which have seen Strasbourg firmly establish their place as serious contenders.

They hosted Lens in the early Sunday kick-off after Nice’s 1-1 draw with Rennes on Saturday night, knowing that a win would take them to fourth in the table. Their performance was not exactly great, especially in the first half, but Ludovic Ajorque converted a penalty in the second half which ultimately proved to be enough for the win.

Julien Stéphan is doing a remarkable job in his first full season at Strasbourg, as he looks set to take a club that was down in the third tier of French football as recently as six years ago to Europe. The best part is that their lofty position in the league table is backed by some impressive underlying performances, as Strasbourg have the third-best xGD (Expected Goal Difference) in Ligue 1 this season.

If they can keep playing like this, Strasbourg may well find themselves in Europe’s top tier competition for the first time in over 40 years when the 2022/23 season kicks off.

Another side that had their Champions League aspirations boosted this weekend were Real Betis, who eased past Osasuna in spite of the absence of key attackers like Nabil Fekir and Borja Iglesias. Fekir has the second-most goal involvements in the league this season for Betis, while Iglesias’ average of 0.55 xG per 90 is not bettered by any of his teammates.

The man that shone on the pitch in this match was Juanmi, who scored twice and set up the other two goals to take his league tally up to 14 goals and three assists. The 28-year-old forward has thrived in an inside forward role on the left of Betis’ front line, and he is putting up some very good underlying numbers too.

If he and his teammates such as Fekir and Iglesias can keep operating at this level, Real Betis should remain in the hunt for Champions League football next season. They are currently fifth but only five points away from the runners-up spot as all of Barcelona, Atlético Madrid and Sevilla are level on points.

Our bonus match this week comes from Scotland, where the third Old Firm derby of the league season was held at Ibrox Stadium, with Rangers trailing Celtic by three points at the top of the Premiership table.

The hosts got off to a perfect start as Juventus loanee Aaron Ramsey turned Ryan Kent’s cross in the third minute, but Celtic responded very quickly with Tom Rogic equalising in the seventh minute. The visitors had the upper hand in terms of their performance for the remainder of the first half, and they finally got a tangible reward for it as Cameron Carter-Vickers scored on the stroke of half-time.

Ange Postecoglou’s side held on to their lead in a tense second half that saw Rangers push hard for an equaliser late on, but their efforts were all in vain as Celtic pulled six points clear at the top of the table. With just one match left until the end of the regular season, the Bhoys are getting ever closer to a 52nd Scottish league title, but the job is not yet done.

Stats courtesy Opta via FotMob, Transfermarkt and StatsBomb via Fbref.