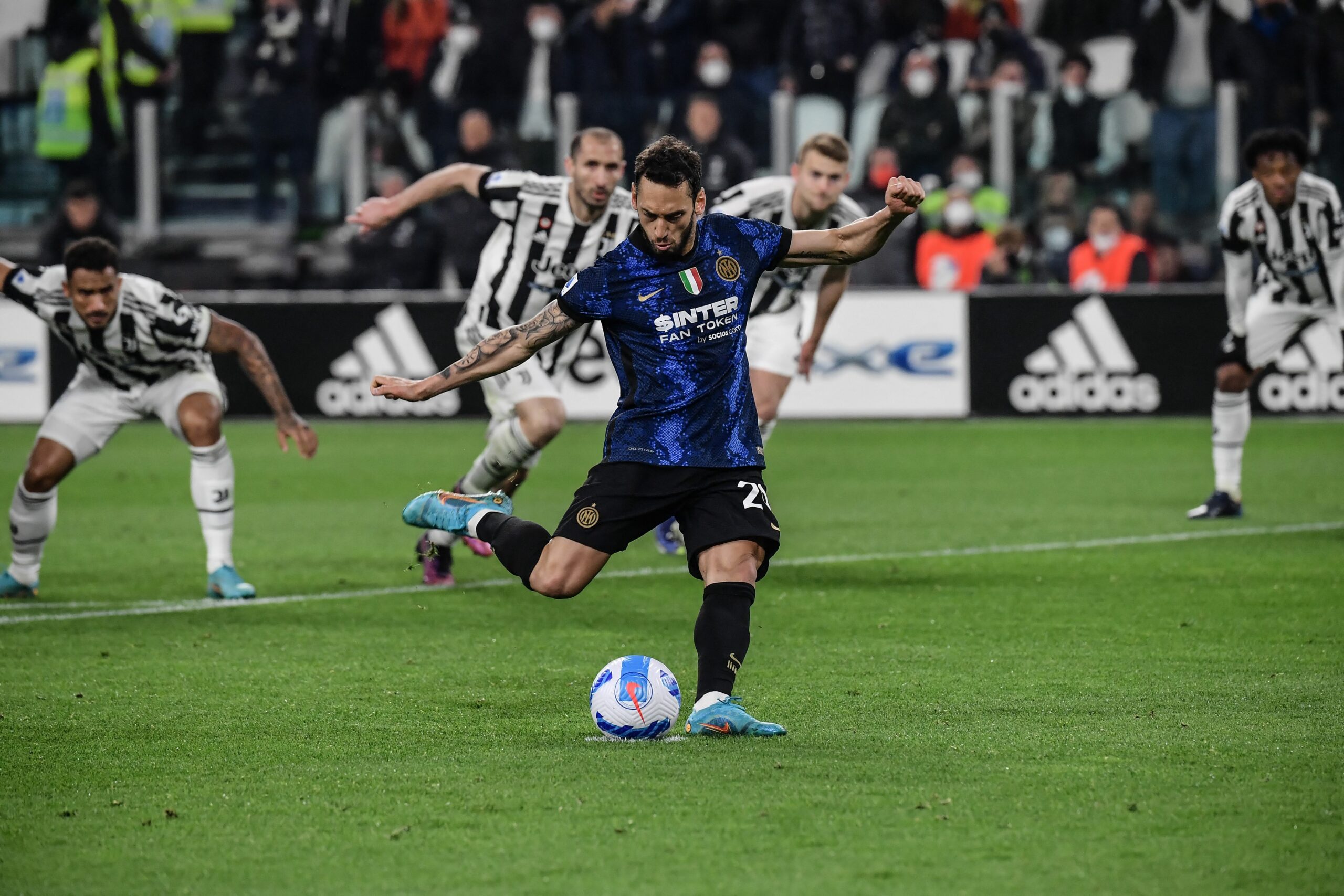 Inter Milan left Turin with three points after a Hakan Çalhanoğlu penalty sealed a 1-0 victory for the Nerazzurri.

The two Italian giants entered the match with just a single point separating them in the Serie A table, proving this Derby d’Italia to be the most crucial domestic match of the season for both sides.

The match kicked off at a high tempo, and Juventus were given the first opportunity of the game as Inter goalkeeper Samir Handanović fisted Juan Cuadrado’s cross back into play. Giorgio Chiellini was the quickest to get to the rebound, but he struck his effort against the crossbar to keep the game even.

In the 34th minute, Manuel Locatelli fell to the ground after being kicked in the head. The midfielder walked off the pitch in confusion as Denis Zakaria would replace him and complete his comeback from injury earlier than expected.

Shortly before half-time, Denzel Dumfries entered the Bianconeri box and fell to the ground after being brought down by Álvaro Morata. VAR would call the referee to review the incident, and after seeing the footage, Massimiliano Irrati pointed to the Juventus penalty spot.

Çalhanoğlu’s initial shot was saved by Wojciech Szczęsny, however, Juventus would score an own goal from the rebound. The drama would continue as the referee blew for a retake as Szczęsny had encroached his line.

Inter had a second chance to open the scoring, and Çalhanoğlu made no mistake as he sent a powerful shot passed the Juventus goalkeeper, who had guessed the right way.

Juventus were quick to take control after the half, and within 10 minutes, another VAR intervention took place as a collision between Alessandro Bastoni and Zakaria just outside the Inter box. A free-kick was awarded to the home side, but Paolo Dybala’s set-piece would pose no threat to Handanović’s goal.

The Bianconeri would continue to pile forward, and in the 74th minute, Zakaria would strike the bottom-left post from a powerful 20-yard strike.

Max Allegri’s side continued their attempts to break down Inter’s defence but would run out of time as Irratti blew for full-time.

Juventus’ 16-match Serie A unbeaten streak ended as Inter would hold onto their third spot and keep their Scudetto hopes alive. If AC Milan win their match against Bologna tomorrow, the Old Lady would fall 10 points behind first place with just 7 games left to be played.