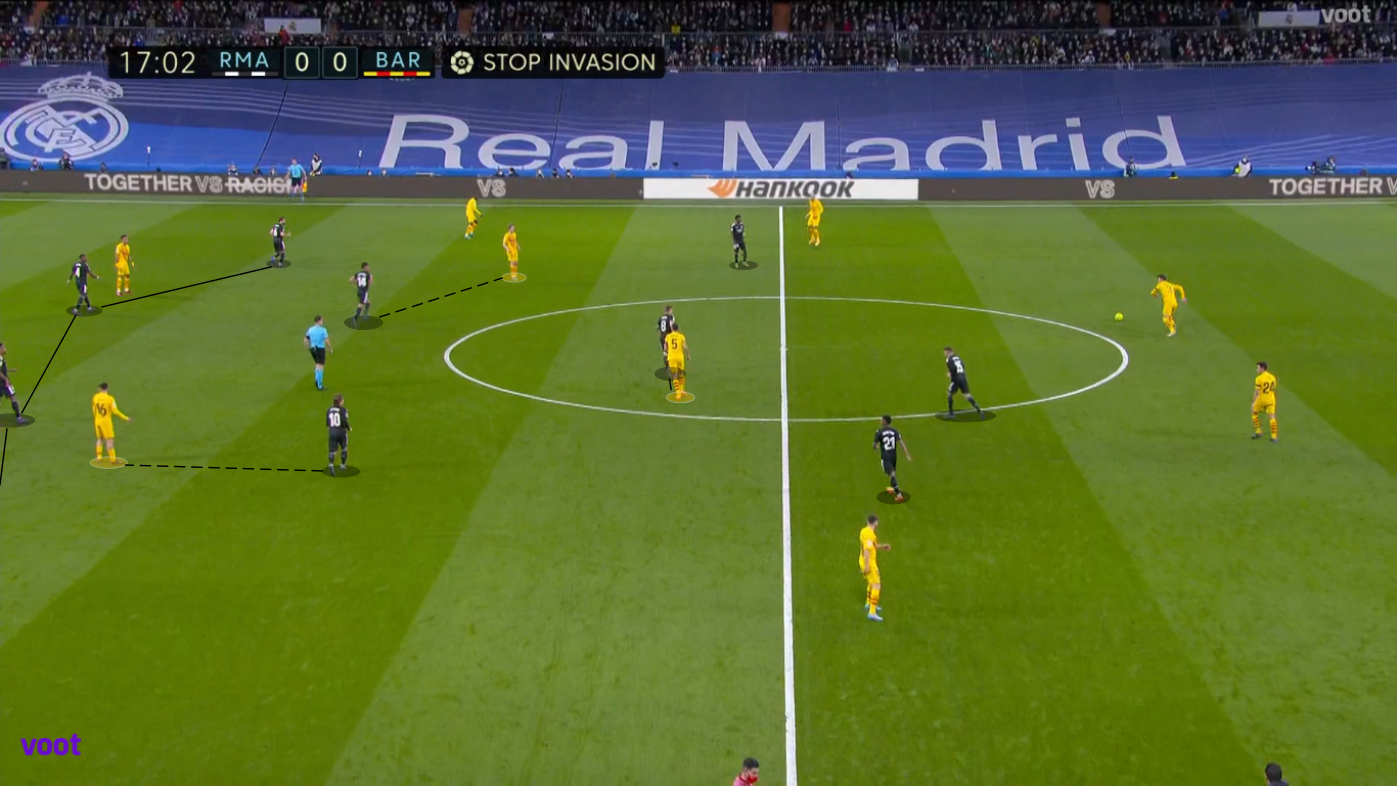 The modern evolution of elite-level football has seen the very best clubs gravitate towards a possession-based style of football with elements of juego de posición or positional play.

Among the main reasons for this is the fact that generally speaking, having more possession allows you to have more control in a match because the opposition effectively cannot pose a threat when they are chasing the ball.

One of the notable outliers currently are runaway La Liga leaders Real Madrid, as their attacking success this season has primarily come through the individual quality of their attackers in situations where it can be utilised most, such as counterattacks and transitions, rather than an intricate attacking structure.

Their traditional rivals, Barcelona, were struggling at the start of the season under a coach who did not always follow the ways of the ‘Barça DNA’, so they eventually replaced him with one of their club legends who lives by the Barça DNA.

With their incredibly talented academy graduates and a splash of cash in the winter transfer window, all of a sudden Barcelona started to look like a completely different side.

The hope was, therefore, that they would be able to offer some serious competition to Madrid in El Clásico, a fixture that has been whitewashed with Los Blancos wins of late.

Barcelona had lost all five of their most recent meetings in all competitions and had not won in over three years. Gavi was not even born the last time that happened.

A quick look at the scoreline will tell you that Barcelona did much more than compete, as they recorded the joint-biggest El Clásico victory since 2010 in terms of the goal difference.

In truth, Barcelona only needed a little bit of time to settle into their rhythm early on, but as soon as they did, it was simply one-way traffic.

As far as the line-ups were concerned, Madrid were missing start striker Karim Benzema through injury so they went for a weird 4-2-4 of sorts and tried to cram as many midfielders as possible on the pitch. Barcelona, meanwhile, took to the field in their traditional 4-3-3.

What Real Madrid were trying to do with this formation, even they did not seem to know. Out of possession, they defended in a mid-block which did not have a clear structure in front of the back-four.

All the midfielders alternated in man-marking their Barcelona counterparts from time to time, but there definitely wasn’t any defined plan at play. The only way it can possibly be described is 4-Vibes-Vibes.

Such an excessive amount of vibes tends to leave lots of open spaces in midfield, which Barcelona were easily able to exploit in their clear and defined 2-3-2-3 structure in possession.

The fact that this shows up almost identically in their pass network is a testament to their wonderful execution on the pitch, and also highlights Madrid’s clueless defensive structure which facilitated this execution.

One of the main criticisms levelled at the positional play sides is that they can often be guilty of being too slow or cautious while progressing the ball and miss the opportunities to make a killer pass when an element of risk is involved.

This is certainly not the case with Xavi’s Barcelona, as they have always been quick to attack when such openings present themselves. This was clear in the build-up to the opening goal, where the visitors quickly went from left to right and scored less than 15 seconds after recovering the ball.

Another pattern of Barcelona’s play highlighted in this goal is their tendency to play short passes on the left before switching the ball to the right, where they have a winger close the touchline.

Whether it is Ousmane Dembélé or Adama Traoré, the right winger excels at taking their man on one-on-one and getting past him.

This was also what led to the second goal, though it ultimately came from a corner after the cross was cleared away.

Besides his two assists, Dembélé had a superb game as his ball carrying helped Barcelona get forward. In the 80 minutes the Frenchman spent on the pitch, he completed 15 progressive carries and a couple of take-ons.

Barcelona also had a clear and defined structure out of possession as they defended in a 4-4-2 shape which involved a good deal of man-marking, as they have regularly done under Xavi. Madrid, on the other hand, went for even more vibes in possession.

The disadvantage of cramming four midfielders on the same pitch was that there was no central attacker to support Vinícius Júnior, who was seemingly in a different postcode to his teammates for long spells of the match.

This highlights the pitfalls of their reliance on the individual quality of their forwards — their attack becomes non-existent in such a match without Benzema.

Madrid also faced similar issues in the first leg of their UEFA Champions League round of 16 tie against Paris Saint-Germain when a not-fully-fit Benzema was on the pitch, and it was the French striker himself who saved the day in the second leg.

Carlo Ancelotti made a couple of half-time substitutions that saw Casemiro drop to centre-back, but this was not a planned move as the home team’s defence was all over the place in the opening minutes of the second period.

Barcelona’s forwards were able to get in behind the Madrid backline three times in the space of the first five minutes of the half, and they scored on two of those occasions.

Such big scores in big games often flatter the winning team, but that certainly was not the case in this match as Barcelona dominated in every aspect of the game and created bags of chances to score.

They undoubtedly deserve a lot of credit for a wonderful performance and should be pleased with their rapid development under Xavi, but the main reason behind their comprehensive victory has little to do with them.

The fact is, Madrid’s style of play and reliance on individual quality is not sustainable at the elite level. With all of Europe’s top clubs fighting on three or even four fronts simultaneously and playing over 50 matches every season, players are bound to get injured or at the very least need to be rested and rotated.

If a team completely collapses with the absence of just one player, then they simply cannot compete with the best teams in the world right now.

Madrid may well win La Liga this season, but they are surely going to struggle in the Champions League, and will have to start worrying about domestic matters for next season with the way Barcelona are playing. The Santiago Bernabéu is not the only thing that needs renovation.