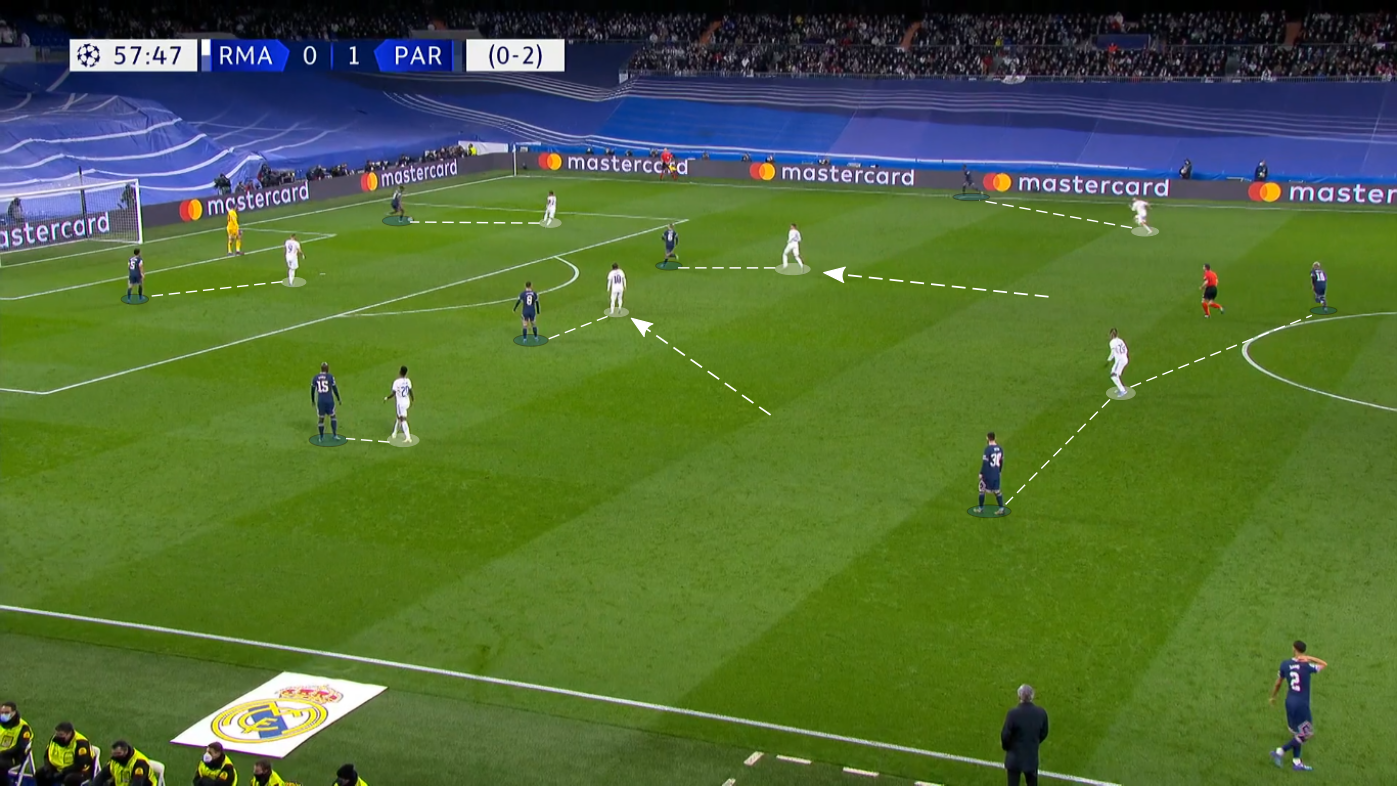 Paris Saint-Germain are a prime example of how money cannot always guarantee all the success in the world, and they have demonstrated this yet again in their Champions League round of 16 elimination at the hands of Real Madrid.

Funnily enough, this was the most star-studded PSG side of all time in terms of pure individual brilliance as they have the likes of Lionel Messi, Kylian Mbappé and Neymar in their squad. And yet, this was their joint-worst Champions League campaign since their Qatari takeover.

Their tie against Madrid quite clearly showed how there can be such a thing as too many stars in one side.

In the first leg, only two of the aforementioned trio were available, and PSG performed very well as they dominated proceedings and came away with a one-goal victory.

In the second leg, all three were playing, and guess what happened next.

In our analysis of the first leg, we quite clearly found that Madrid certainly did not help themselves with a poor match plan that made it easy for Mauricio Pochettino’s side to tactically outclass them.

They barely changed anything for the second leg, with the only noteworthy switch seeing Federico Valverde come into the side for Casemiro and Toni Kroos dropping into a deeper role.

The first half of this match was played out like the first leg, with PSG dominating possession as they kept over 60% of the ball and Madrid doing little to contest that.

The proceedings of the half were summed up around the 24th minute when the visitors were allowed to comfortably pass the ball around in the opposition half, causing collective distraught in the Santiago Bernabéu as the whole stadium seemed to be sounding their displeasure about their team’s lack of proactiveness out of possession.

The critical difference, was that PSG’s system in possession worked well in the first leg as they could utilise all of their players in familiar roles.

In the second leg, though, it seemed that Pochettino was shoehorning all three of his big-name players on the same pitch without much consideration for the tactical side of things.

Mbappé has been the best player of the trio, and he seems most effective from the left, so Pochettino deployed him there. However, this meant that Neymar would have to play an unfamiliar role.

Messi’s best games in a PSG shirt have come when he has been asked to play as a false nine, but since he can also operate off the right, he was shifted wide to accommodate the Brazilian international centrally.

However, both of these players like to drop deep and receive the ball, so what happened was that they got in each other’s way quite often.

There was little dynamism up front to trouble the Madrid defence, with Achraf Hakimi’s forward runs left seemingly unsupported as Messi drifted into central spaces to receive the ball.

Their passing network from the first half highlights this, as it shows a lot of congestion in midfield but nothing apart from a bit of Mbappé up front.

The goal they scored came during a rare counterattack, where the lightning-quick Mbappé was able to get in behind the defence to run onto Neymar’s first-time ball, after which the Frenchman slotted the ball past Courtois at the near post.

So, in spite of all their tactical issues, PSG seemed to be in a comfortable place at half-time with a two-goal lead on aggregate.

Since Madrid were once again not helping themselves with a timid 4-5-1 low block out of possession, the visitors would have felt that they could easily get through the next 45 minutes and progress to the next stage of the Champions League.

There was, as you might already know, a twist in the tale. It all started when Eduardo Camavinga replaced Kroos in the hosts’ defensive midfield in the 57th minute.

One of the reasons for Carlo Ancelotti’s decision to ensure that his side would always have a flat line of three in central midfield while defending rather than asking the two midfielders on either side to push forward and press must have been that he did not want to leave Kroos isolated because the German international is not known for his defensive work and positioning.

This changed when Camavinga came on, as Ancelotti seemed comfortable leaving him alone in defensive midfield, although the game state must also have been a factor in suddenly asking his players to press high.

As soon as the French teenager came on, Madrid switched to a man-to-man high pressing system, although they left both centre-backs to double up on the dangerous Mbappé.

As a trade-off, they conceded numerical superiority in midfield as the two wide midfielders pushed forward and left Camavinga alone to deal with Messi and Neymar.

The rewards outweighed the risk – Madrid were losing by two goals at home, so it would never have looked good if they did not even try to chase the game, and since PSG’s system in possession was not very effective anyway, there was little danger of the home side’s press being carved apart.

It took just three minutes for the home side’s high press to yield a huge result, as Karim Benzema was able to pounce on a loose touch by Gianluigi Donnarumma in the PSG box, and with Vinícius Júnior also high up the pitch, the two combined to half the deficit.

Vinícius’s higher positioning out of possession would also come in handy in the build-up for the second Madrid goal.

As Luka Modrić carried the ball forward after a turnover in his defensive third, the Brazilian winger was very close to the PSG back line rather than deep in his half tracking Hakimi, so he was able to utilise the space on the right of the visitors’ defence to get his side forward.

The final goal was the most poetic. PSG, a side built to succeed by utilising individual quality, ended up losing due to an individual mistake as Marquinhos effectively ended up assisting Benzema for the winner in his attempt to get the ball away from Vinícius. Their collapse, of course, also began with an individual error on Donnarumma’s part.

The fact that this goal was conceded in about 10 seconds after play resumed following Real Madrid’s second also says a lot about the character and resilience of this PSG side, and indeed their togetherness.

Truthfully, this collapse should not surprise anyone. Of course, Madrid deserve some plaudits for turning things around, especially Benzema for his brilliant hat-trick and Ancelotti for his smart tactical switch, but from PSG’s point of view, this was entirely avoidable.

Unfortunately for them, this has been a pattern throughout their recent history — think back to Barcelona’s famous remontada.

Even when they were at the top of their Champions League group this season, their excessively star-studded squad was already proving problematic, and in the end, it has cost them a shot at the coveted Champions League title once again.

Add too much sauce, and your food will turn sour.