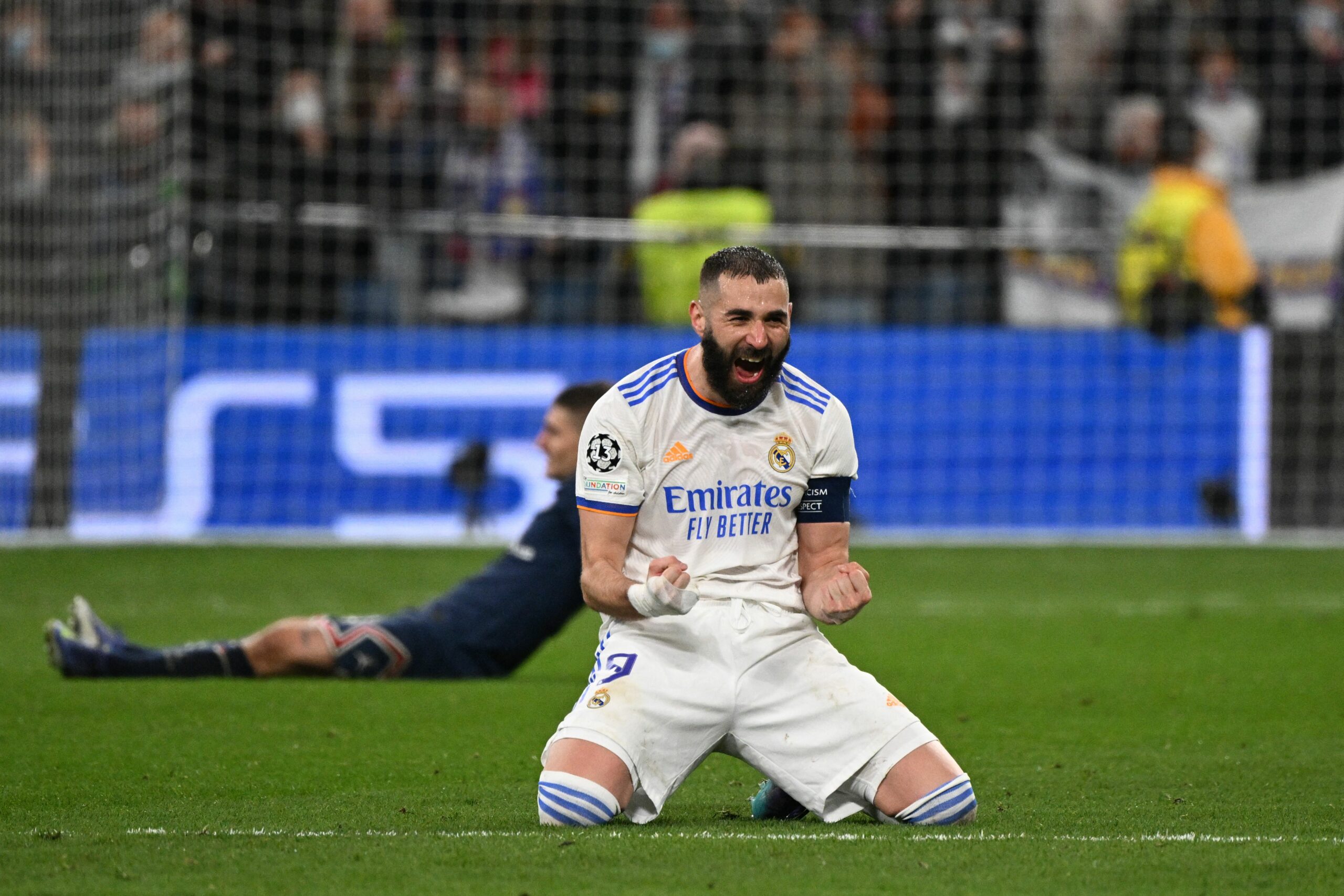 Real Madrid progressed to the quarter-finals of the Champions League after a thrilling second leg against Paris Saint-Germain.

The visitors took a 1-0 lead to the Bernabeu, thanks to Kylian Mbappe’s last gasp winner in the reverse fixture. And when the Frenchman netted in the first half, Les Parisiens looked certain to reach the next round.

However, a mistake by Gianluigi Donnarumma in the 61st minute gave Los Blancos a route back into the game, allowing Karim Benzema to tap home. 15 minutes later, the forward levelled the aggregate scores, firing in from Luka Modric’s pass via a deflection.

Almost immediately afterwards, Madrid took the lead. Marquinhos’ poor pass out fell straight to Benzema, who finished first time into the bottom corner for his hat-trick. There were just 11 seconds of open play between the two goals.

Despite needing a goal to avoid elimination, PSG were oddly tame going into the closing stages. The hosts looked far more likely to get the next goal.

The defeat saw the Ligue 1 leaders knocked out, extending their wait for that elusive Champions League trophy. As for Madrid, they join Liverpool, Bayern Munich and Manchester City in the quarter-finals.

The drama seemingly continued after the final whistle, however. PSG president Nasser Al-Khelaifi and sporting director Leonardo were reportedly furious with some of the refereeing decisions, and confronted the officials after the match.

Here are five talking points from the match.

It seems crazy to say this now, but there once was a time when Benzema wasn’t particularly highly rated. Having played second fiddle to Cristiano Ronaldo for most of his time in the Spanish capital, his numbers didn’t necessarily reflect his ability.

But since Ronaldo’s departure in 2018, the France international has been the talisman for Los Blancos, and he has filled the void admirably.

In the last three-and-a-half years, he has bagged 117 goals for Madrid – their next highest goalscorer in that time frame is Vinicius Junior with 31.

His hat-trick took him to 79 Champions League goals – only Cristiano Ronaldo, Lionel Messi and Robert Lewandowski have more. To make things even more impressive, only one of them was from the penalty spot.

Not only that, but he also overtook the great Alfredo Di Stefano in Madrid’s all-time top goalscorer charts. He now sits in third on 309, behind only Cristiano Ronaldo and Raul.

It may have taken a while, but Benzema is now getting the respect he deserves.

When the clock hit the hour mark, Mauricio Pochettino’s men seemed in control of the tie. They were two goals up on aggregate with just 30 minutes remaining, and weren’t coming under too much threat. Then they completely blew it.

For a side that has spent a lot of money and signed so many players over the last decade, PSG have ended up with a number of sensationally average footballers playing regularly for them. But on Wednesday night, it was the usually-reliable ones who let them down.

Gianluigi Donnarumma – probably the world’s most valuable goalkeeper right now – gifted the home side a way back into the match.

Marco Verratti, who is the club’s best midfielder by a mile, lost the ball directly from the kick-off for the third goal. Marquinhos also played a huge part in the winner, putting it on a plate for Benzema.

It’s not the first time we’ve seen PSG lose their heads in a big game. Last season they were dominating at home to Man City, but conceded two poor goals in seven minutes to lose the match. Back in 2017, they took a 4-0 lead to the Camp Nou and still somehow managed to get knocked out.

Maybe they’re just overrated. Perhaps it’s a mental block. Maybe it’s a tactical issue. Whatever it is, they will need to sort it out, or else they can forget about European glory.

We’ve said a lot about PSG in this article, but one man who could leave the pitch with his head held high is Kylian Mbappe. The speedy forward put in yet another wonderful performance on the big stage.

Having scored a brilliant late winner in the first leg, he put his side two up in the first half with a trademark finish. After latching onto Neymar’s long pass, he sprinted up against David Alaba, cut inside, and swept the ball in at the near post.

This wasn’t the only time he found the net. The offside flag denied him a hat-trick, having a goal ruled out either side of half time.

There are many players who generate a lot of hype, and many of them are false dawns. But Mbappe is the real deal. And to rub salt in PSG’s wounds, he looks likely to leave on a free transfer next summer.

If you watched the game on Wednesday without any prior knowledge of either side, you’d probably think that Luka Modric was a sprightly youngster. It will have come as a shock that the Croatian is 36 years of age.

While Benzema stole the headlines, the former Tottenham Hotspur midfielder put in a performance that some of the very best would have been proud of. He covered every blade of grass, kept his composure, and ran rings around the opposing midfield.

The highlight of his game came in the 76th minute, as he produced a world-class assist for Benzema’s second.

He intercepted Neymar’s pass on the edge of his own box, drove past Verratti and Idrissa Gana Gueye, released Vinicius, received the ball back from him, and slid a perfect through ball for Benzema to finish.

Even at his age, Modric is on top of the world. What a player.

Is Lionel Messi done at the top level?

Lionel Messi is one of the greatest players of all time, and nothing will ever change that. He has shown this time and time again over the last 15 years. He has nothing left to prove.

However, it seems like his time at the top is coming to an end. His missed penalty in the first leg proved to be costly, and he was relatively quiet at the Bernabeu.

The seven-time Ballon d’Or winner doesn’t do much of the ‘dirty work’. When his side is out of possession, he tends to stand still or walk around. He will rarely press, tackle, track back etc.

That was fine when he was in his prime. He’d more than compensate with 50 goals and 20 assists per season.

But he doesn’t do that anymore. That’s not to say that he’s got nothing left to offer – he still has the most assists in Ligue 1 this season.

But it’s reached a point where you have to wonder whether his positives outweigh his limitations.