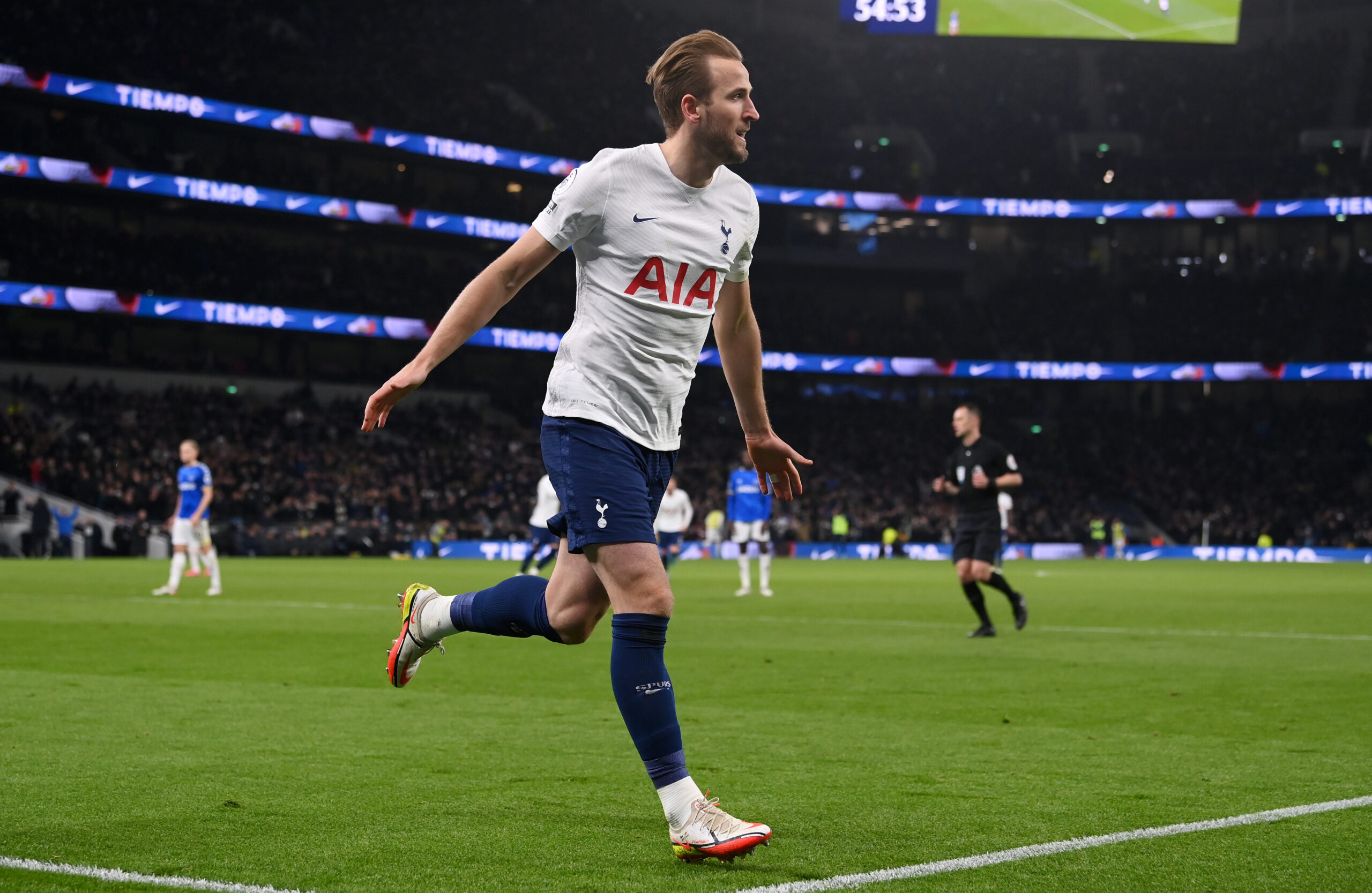 He grabbed one in the first half from Matt Doherty’s through ball and netted another after the break with a volley, again assisted by Doherty.

The strikes were his 175th and 176th in the Premier League, taking him above Arsenal legend Thierry Henry in the league’s all-time goal charts. He now sits in sixth place, and his next goal will pull him level with Frank Lampard in fifth.

Since his breakthrough in the 2014/15 season, many have viewed Kane as the possible successor to Alan Shearer, who currently holds the all-time Premier League goal record.

Eight years and three Golden Boots later, and the England captain remains in with a shot of reaching it. But will he do it?

What does he need?

Shearer ended his career with 260 goals in the Premier League. He also netted 23 in the top-flight when it was known as the First Division, but these goals are not counted towards the record.

Kane is currently on 176. He needs another 85 to surpass Shearer and break the record.

The Tottenham man has been a regular in the first team for approximately eight seasons now. In this time frame, he has averaged 22 goals per season. If he continues at this rate, it will take him around four more years to hold the record.

But perhaps this is slightly misleading. The forward has had his fair share of injuries. At his current goal-per-game rate, he would need another 129 games to score 85 goals. This is just under three-and-a-half seasons’ worth of matches.

The main one will be his age. Kane is 28 and turns 29 in the summer. According to the numbers, he will need to keep scoring at his current rate until he is 33 to break the record.

Real-life football isn’t FIFA Career Mode when players suddenly lose all ability on their 30th birthday. The likes of Robert Lewandowski (33) and Karim Benzema (34) are playing the best football of their careers well into their 30s. There’s every chance that Kane could develop into an even better player.

If he keeps playing at the top level until he’s 35, Kane will need to average 14 goals per season to equal Shearer. Considering his lowest tally since his breakthrough is 17, this looks pretty achievable.

However, some players decline early. Wayne Rooney and Mesut Ozil were two of the very best players in the world at their peak, but were way past their prime before they reached 30.

It’s near impossible to say how Kane will age. He could go one way or the other. He has never relied too heavily on pace and athleticism, so you’d think that it shouldn’t affect him too much. Then again, Rooney and Ozil were hardly 100-metre sprinters either.

Another factor is injuries. As mentioned above, Kane’s injury record over the last few seasons hasn’t been the cleanest. This not only reduces his time on the pitch, but gradually wears him down.

Shearer himself had injury problems. In the 2000/01 campaign, he missed half of the campaign with an injury. He managed to bounce back the following term, hitting 23 league goals.

Injuries won’t be the end of Kane’s career. However, they could hold him back from breaking the record.

Could a transfer help?

Last summer, Kane was at the heart of one of the biggest transfer sagas of the window. Manchester City wanted to sign the 28-year-old, but Spurs dug their heels in and refused to let him go. He reportedly skipped training in an attempt to force the move, but no deal was reached.

At the Etihad Stadium, a striker has everything they could possibly need to score goals. The holders have been the top scorers in the division in each of the last four seasons and in seven of the previous eight. Since Pep Guardiola’s arrival in 2016, City have scored 148 more league goals than Tottenham.

Should the Cityzens come back in for Kane in the summer, it could significantly boost his chances of breaking the record. With Kevin De Bruyne, Riyad Mahrez and Phil Foden providing for him, he would be the favourite for the Golden Boot.

But football isn’t always that simple. We would expect Kane to succeed at Man City, but there’s no guarantee. Players underperform at new clubs for various reasons.

How will Kane be remembered?

Whenever Kane hits a milestone or breaks a record, all the doubters come out with the same question: “but what has he won?”

And it’s true – Harry Kane has not won a trophy in his career. This was the driving force behind his desire to leave north London last summer.

It’s obvious that he wants to win trophies. And if he gets that move to Man City, he will get some medals around his neck.

However, you can’t downplay the value of a record like this. Shearer won a Premier League title at Blackburn Rovers, but everyone remembers him better as a Newcastle United legend. He’s remembered far more for the goal record than the league title.

There are plenty of great players who have won it all for Man City, Manchester United, Liverpool, Chelsea and other top clubs. Only one player can hold a record.

Kane may stay at Spurs, become their all-time top goalscorer while breaking Shearer’s record and surpassing Wayne Rooney on the international stage.

And he may ultimately not win a trophy while doing it, which will be disappointing. But it will certainly not be for nothing.