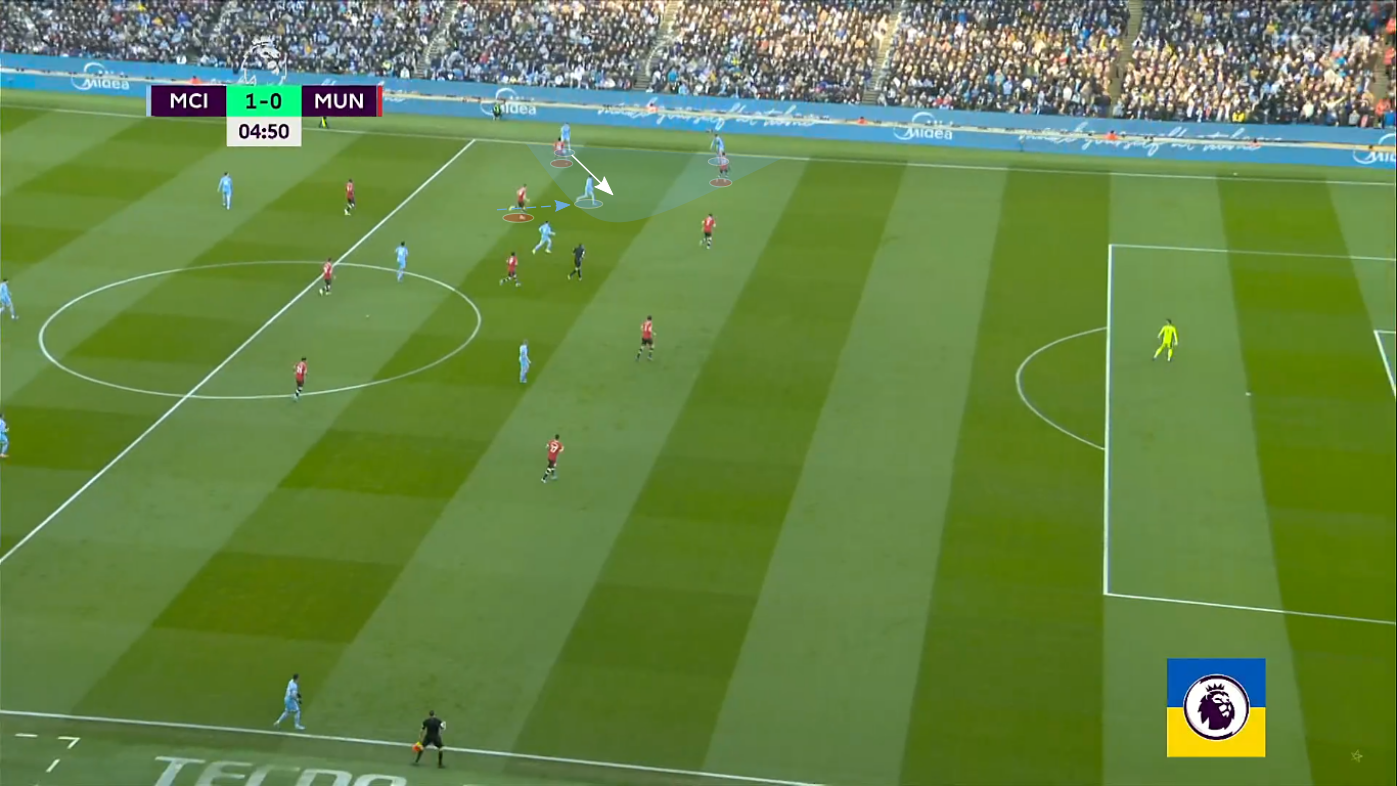 Despite their total domination of footballing success in Manchester recently, City had not scored a derby goal at the Etihad Stadium since 2019 before their most recent clash against Manchester United.

After the match, Pep Guardiola perhaps half-jokingly suggested that this was the case because all their previous home league derbies came so late on in the season that the title had effectively been wrapped up by then, but that was certainly not the case on this occasion. After Liverpool’s narrow 1-0 win over West Ham United, the gap at the top had come down to just three points, so the margin for error was simply non-existent for City.

Although there were some blips along the way, they ultimately cruised to a statement 4-1 derby win after a commanding all-round performance.

There was a fair bit of intrigue around the line-ups, especially for United who were playing without a recognised striker as Edinson Cavani was injured, Cristiano Ronaldo may or may not have been injured but was not in the squad either way, and Marcus Rashford was left on the bench.

Although City’s dominance was not as complete as it was in the reverse fixture, they were certainly in the driver’s seat and as far as the xT (Expected Threat) timeline is concerned, this was as commanding a performance as you will ever see in a derby.

Some eyebrows were raised when the City XI was named due to the lack of Raheem Sterling, but it quickly became apparent why that was the case. Against United’s two-man midfield in their 4-4-2 shape out of possession, Guardiola’s plan was to overload the wide areas with his midfielders and stretch the visitors in both directions, so he needed players like Jack Grealish and Bernardo Silva who are great with the ball at their feet in tight spaces.

Using them, he was able to set his side up in a way to create three-versus-two situations on either wing – wide overloads.

The two aforementioned players were both deployed on the left side in this match, and their importance to the City performance becomes clear when you take a look at their team’s touchmap, which shows a clear bias towards their flank.

Naturally, therefore, they also looked more threatening down that side, as their xT heatmap indicates with a lot of action in the left half-space and wing in the opposition half but little on the right.

Indeed, each of the first three City goals originated on their left.

The build-up to the opener had the clearest instance of an overload, as Silva’s movement out wide allowed João Cancelo to find him with a pass and get City into the attacking third.

Silva and Grealish then exchanged passes in a tight space on the wing, which attracted the Manchester United defence to their direction.

By the time the Portuguese midfielder fashioned a crossing opportunity, both of United’s midfielders were so far out on the right that they could not defend the ball coming into the box, although it should be said that they were guilty of ball-watching too.

After United equalised following a very well executed counter-attack, it looked like the game could go either way, but the hosts took just six minutes to respond and retake the lead.

This time, they demonstrated how their wide overload in possession aided counterpressing, as the goal was created when Cancelo intercepted Anthony Elanga’s risky out-ball, which the Swede was forced to play because he was surrounded and had no passing options.

The third was a wonderfully controlled half-volley from Riyad Mahrez after a deep Kevin De Bruyne corner, but again, the set-piece was won after Grealish found Cancelo in a crossing position on the left, and the delivery was deflected out off a United defender.

After the third goal, the match became an exercise in game management for City. It was one they executed incredibly well as they kept close to 85% of the ball after Mahrez’s first strike and prevented their visitors from attempting even a single shot.

However, they were undoubtedly helped by Ralf Rangnick’s decision to take off his team’s two most threatening attackers in Elanga and Pogba just minutes before the third goal. Their replacements managed just 13 touches between them in close to half an hour, posing next to no problems for the City back line.

In truth, we did not learn anything new from this match. We all knew that City are incredibly good by virtue of being one of the best teams in Europe right now, while their neighbours are struggling with managerial changes and an incomplete squad with holes in lots of key positions, not least their midfield.

City remain leaders of the title race, United are in grave danger of missing out on Champions League football next season, and Manchester remains blue.