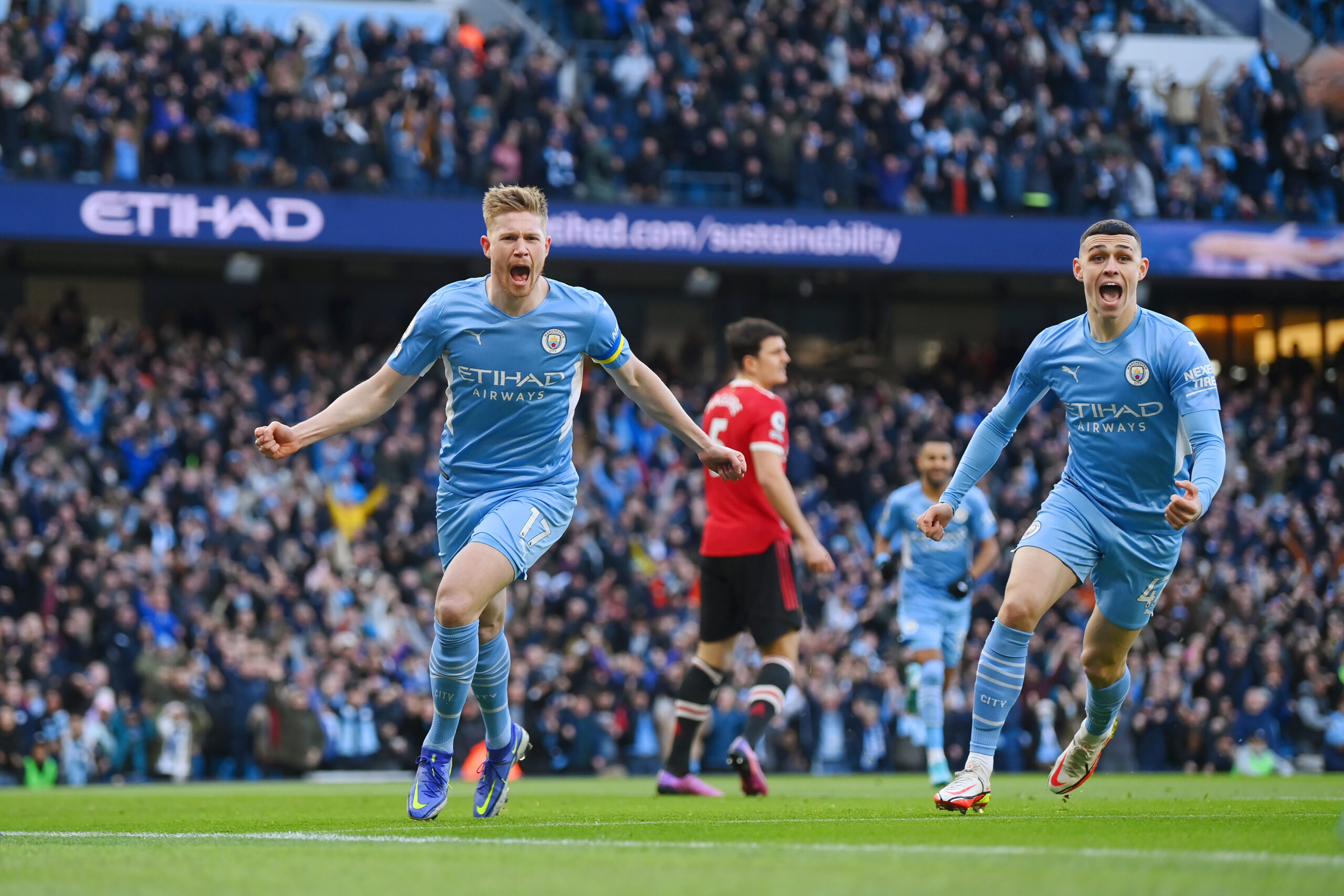 It was another fine afternoon for Manchester City, who comfortably defeated bitter rivals Manchester United at the Etihad Stadium yesterday.

Kevin De Bruyne opened the scoring early on for the hosts, sweeping in at the near post from Bernardo Silva’s low cross. But the Red Devils hit back 17 minutes later thanks to Jadon Sancho’s curling effort.

Man Utd’s joy was short-lived, as they found themselves behind again shortly afterwards following a string of defensive errors. Several defenders failed to clear their lines, allowing De Bruyne to finish from close range.

After the break, Man City stepped things up a gear and took complete control of the game. And in the 68th minute, they were rewarded when Riyad Mahrez excellently finished from De Bruyne’s corner.

The Algerian compiled the visitors’ misery in injury time, as he netted his second and City’s fourth. Ilkay Gundogan slipped the winger through, and he slammed into the far corner via the shoulder of David de Gea. He was initially ruled offside, but a VAR check proved that he had timed his run perfectly.

Here are five talking points from the game.

Throughout the season, the debate over Man Utd’s forward options has been raging. Cristiano Ronaldo was getting goals, but some wondered whether his presence was holding them back. And when he stopped scoring, people started to question his signing.

Meanwhile, Edinson Cavani does more of the ‘dirty work’, but hasn’t been banging them in at a prolific rate. Additionally, he seems to be unavailable most of the time for whatever reasons.

Neither of those two were in the squad, leaving Ralf Rangnick thin up front. Marcus Rashford seemed the most logical choice, given that he has played through the middle on several occasions throughout his career.

But the German opted for Bruno Fernandes as a false nine. This was, rather unsurprisingly, not very effective.

The man they could have done with was Anthony Martial, who had been influential in three victories over the Cityzens in the previous two seasons. Perhaps they will be left regretting the decision to loan him out to Sevilla in January.

But you have to wonder what this means for Rashford. Ronaldo out, Cavani out, Martial on loan, Mason Greenwood absent, and yet he still isn’t getting a start. It certainly raises questions about how highly Rangnick rates him.

Man Utd may have problems up front, but they’re nothing compared to the issues at the back. Sunday’s match was nothing short of a car crash in defence.

Man City’s third goal was a well-worked set-piece routine and a nice finish by Mahrez. Not much shame in conceding that. But the other three goals were absolutely embarrassing.

For the first, Silva is closed down by Aaron Wan-Bissaka, Scott McTominay and Victor Lindelof. None of them stop the cross, and Alex Telles is half-asleep, allowing De Bruyne to get in front of him and score.

For the second, Anthony Elanga fails to clear the ball, and Lindelof carelessly commits to a challenge with Phil Foden that he gets nowhere near.

After Foden’s effort is saved, Harry Maguire bizarrely decides to let the ball run through his legs, allowing the ball to fall to Silva. His shot deflects to De Bruyne, and he finishes.

And for the final goal, De Gea’s clearance gives possession straight back to City. McTominay allows Gundogan to walk past him like he isn’t there, and Telles plays Mahrez onside.

There isn’t really much to say about Man Utd’s defence. Their back four on Sunday cost approximately £180 million, and yet they’re consistently making errors. Their recruitment team has seriously let them down over the years.

If there is one positive that Man Utd fans can take from this game, it’s the performance of Jadon Sancho. Every weekend, the winger seems to be the brightest spark in Rangnick’s side.

It took the former Borussia Dortmund man 15 appearances to register his first goal contribution at his new club. This form saw him lose his place in the England squad.

But recently, he has begun to look like the man they thought they had bought. He had another moment of magic on Sunday, cutting inside and bending a beauty past Ederson to equalise against his former club.

The 21-year-old is still a long way from justifying his £73m transfer fee. But if he can keep up his current form, he will be a key part of Man Utd’s long-term plans.

We’ve spent a lot of this article talking about Man Utd, and this is fairly justified – they were very poor. But we also have to give a lot of credit to Man City, who truly are up there with some of the best ever English sides.

Arguably their standout player this term has been Mahrez, who hit another two goals in the derby. This takes his tally to ten in the league – a figure bettered only by Mohamed Salah, Sadio Mane and Diogo Jota – and 21 in all competitions.

As a winger, it’s extremely difficult to nail down a starting spot in Man City’s side. Mahrez is competing with Silva, Foden, Raheem Sterling, Jack Grealish and Gabriel Jesus for minutes. But in his current form, he is simply too good to drop.

Aaaaaand now back to the Man Utd negativity. To finish it off, we have to talk about the lack of fight from the away team.

In the first half, they had their worries but managed to compete. They scored a lovely goal and were well in the game.

After the break, they were disgraceful. They hardly got out of their own half and struggled to get a touch on the ball. Once City’s third goal went in, they gave up.

There was a 15-minute period in the second half when the hosts enjoyed 92% possession. Yes, NINETY TWO PERCENT. The fans were ‘ole’-ing every pass. The players were taking the mickey.

Obviously, Utd’s players needed to keep their heads. It’s not worth getting yourself sent off out of frustration. But show a little bit of fight. It’s a derby.