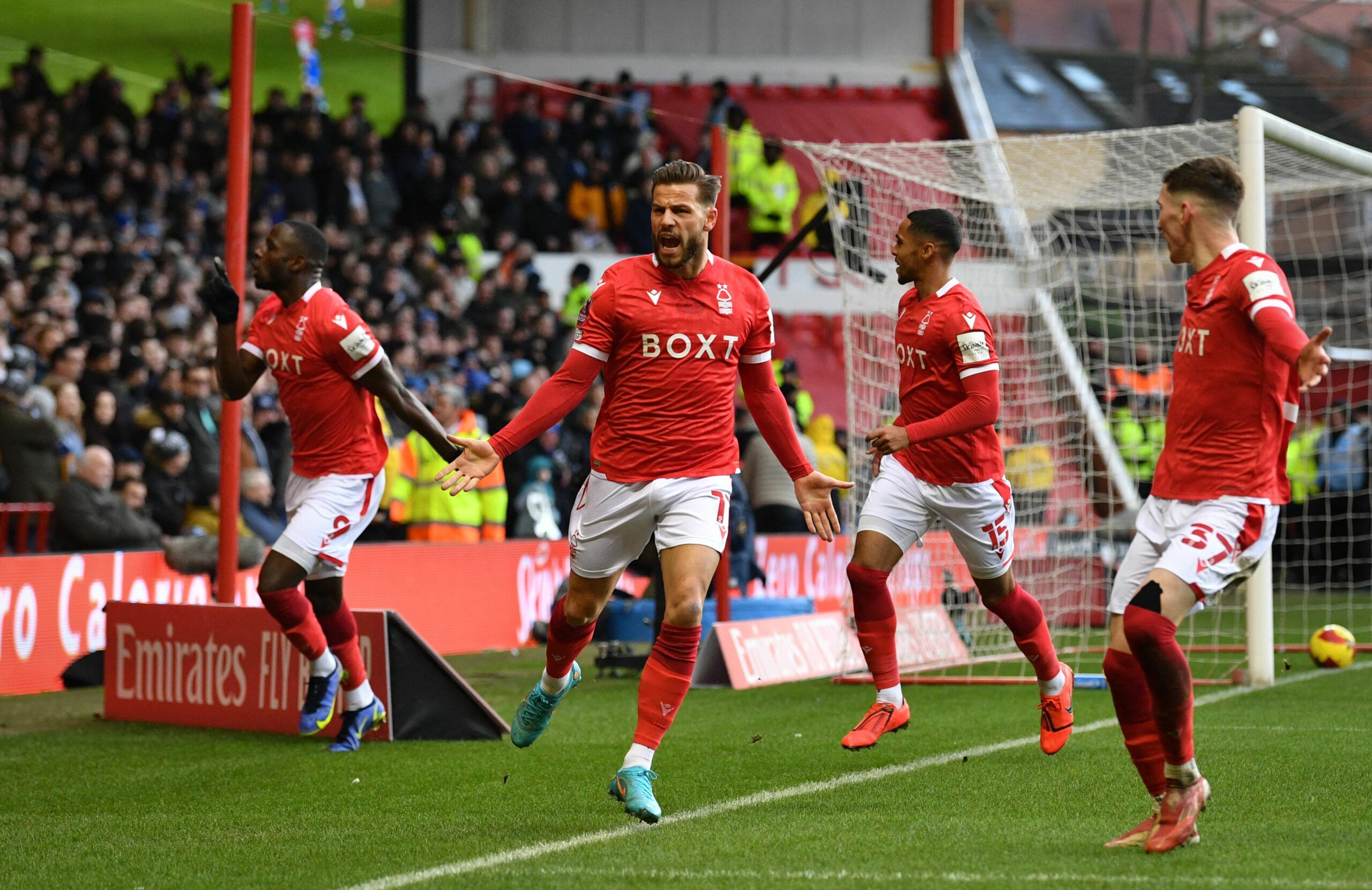 The FA Cup is back on our screens tonight, and we’re approaching the closing stages of the competition.

The remaining 16 teams are just two wins away from a trip to Wembley Stadium, and just four victories off lifting the trophy.

For now, they will be focused on reaching the quarter-finals. We’ve already seen some of the biggest sides in the country fall, with Arsenal, Manchester United and Leicester City all exiting to second-tier opposition.

There could be more upsets on the way this week. We’ve got two all-Premier League ties coming up, while five top-flight sides face teams from lower divisions.

Here are the games to look forward to in the FA Cup round of 16. You can watch the FA Cup live here, or check the football TV schedules if you are in the UK.

Peterborough United’s league campaign isn’t going as planned. After a string of poor results, they were left at the bottom of the Championship table, leading to the resignation of manager Darren Ferguson.

Their only two victories in 2022 have come in the FA Cup. They defeated League Two side Bristol Rovers in the third round, then eliminated Queens Park Rangers at home.

The hosts will have to put in an almighty effort to continue their cup form. They come up against Premier League leaders Manchester City.

With a squad worth hundreds of millions, Pep Guardiola has more than enough to compete on all fronts. Having already missed out on the Carabao Cup, the Catalan will be determined to add the other domestic trophy to his cabinet.

Both sides may have their focus on other competitions. Peterborough are scrapping for their lives in the Championship, while Man City are involved in a tight title race and will also have their eye on the Champions League.

Nonetheless, with Man City’s strength in depth, we expect them to make it through.

Crystal Palace’s season is in danger of petering out. With 11 games left in the league season, they are 12 points off the European places and nine points clear of the relegation zone.

For this reason, we can expect them to prioritise the FA Cup for the final stretch of the campaign. They are yet to play a top-tier side in the tournament and will fancy themselves to reach the quarter-finals tonight.

But they cannot afford to underestimate Stoke, who also have little else to play for this term. The Potters were once in contention for the play-offs, but a disappointing 2022 has seen them fall to 15th.

Both teams have suffered FA Cup heartbreak in recent years. The Eagles were less than ten minutes away from lifting the trophy before being pegged back by Man Utd in 2016, while Stoke narrowly lost in 2011 final.

Middlesbrough managed to pull off one of the shocks of the season in the last round. After a thrilling penalty shootout, they saw off Man Utd at Old Trafford to reach the last 16.

This time, they face a similarly tough test. They welcome Tottenham Hotspur to the Riverside Stadium.

Spurs have been wildly inconsistent in recent times. They picked up an impressive three points at Man City, but also suffered disappointing defeats against Southampton, Wolverhampton Wanderers and Burnley.

Both sides still have plenty to fight for in the league. Boro sit just two points off the play-off places, while Tottenham are five points behind fourth-placed Man Utd with two games in hand.

But with the away side determined to end their trophy drought, it is likely that they will value their FA Cup bid more. It should be a close game, but an away win seems likely.

Luton Town have cruised through the FA Cup, winning their two previous matches by an aggregate score of 7-0. In addition, their league form has been excellent, picking up 25 points from 11 matches since the turn of the year.

This form has elevated them from 17th place to sixth, with only league leaders Fulham accumulating as many points as them in 2022. On Wednesday, they face their toughest test of the year.

Fresh from their Carabao Cup final disappointment, Chelsea head into this game looking to bounce back. With their title hopes realistically over, the FA Cup is the Blues’ best chance of winning a domestic trophy this season.

Thomas Tuchel’s men suffered a scare in the last round, falling behind to League One side Plymouth Argyle. They will be hoping for something more comfortable this time around.

Luton will probably put their play-off hopes before their FA Cup ambitions. Chelsea have little reason to prioritise the league over the cup. For this reason, we should expect a win for the Londoners.

Southampton’s route to the round of 16 has not been the smoothest. They needed extra time to see off Championship duo Swansea City and Coventry City after falling behind in both ties.

Similarly, West Ham United have had a fright of their own. They were a matter of minutes away from losing their fourth round tie to non-league Kidderminster Harriers before Declan Rice’s late strike sent them to extra time.

And they struck late again in the extended period, with Jarrod Bowen tapping in from close range to prevent a penalty shootout.

The Hammers sit ten points above their opponents in the league. However, Southampton boast the better head-to-head record this term, taking four points from their two meetings.

The Saints have little reason not to put out a full-strength team. Meanwhile, David Moyes could prioritise their bid for the top four, as well as the Europa League.

With the lack of depth in the Scotsman’s ranks, it could be a struggle for the visitors.

The other all-Premier League tie comes at Anfield, as Liverpool host Norwich City. This will be their fourth meeting of the season, with the Reds winning all three by an aggregate score of 9-1.

Jurgen Klopp’s record in the domestic cups since arriving in England has not been particularly impressive. But he finally broke his duck over the weekend in the Carabao Cup final and will be hungry for more success.

Standing in his way are Norwich. 43 points separate the two clubs in the league. The odds are overwhelmingly in favour of the home team.

But the Canaries gave a spirited display in their previous trip to Anfield. They took a surprise lead early in the second half through Milot Rashica but were ultimately undone by Liverpool’s quality up front.

We anticipate that this one will go in a similar direction. The travelling side won’t make it easy for them, but Liverpool’s class should prevail.

It’s been a miserable season for Everton fans. Even if they manage to avoid relegation, their campaign has been one to forget.

Their only hope of salvation comes in the FA Cup. The Toffees have not won a trophy since this competition in 1995. Ending this drought would be seen as a massive success.

They last reached the FA Cup final in 2009 before losing to Chelsea. Ironically, it was manager Frank Lampard who bagged the winning goal.

The 44-year-old has won this trophy four times in his playing career. He came close to adding a fifth as manager at Stamford Bridge but fell at the final hurdle against Arsenal in 2020.

On Thursday, Lampard will lead his men out against Boreham Wood. The visitors are the lowest-ranked side left in the competition, residing in third place in the fifth-tier of English football.

In theory, it should be a fairly routine win for the Merseyside club. But if they underestimate their opponents, they could be in for a real shock.

Boreham Wood have already caused some upsets on their journey to the fifth round. They have won all five ties without conceding a goal and knocked out Championship promotion-chasers Bournemouth on their own turf.

This time, they will have to go a step further if they want their adventure to continue. It will be a mountainous task, but we’re sure they will give it everything they’ve got.

Despite this, Everton should have too much for them.

Next week, Nottingham Forest face Huddersfield Town in the final match of the round. This is the only tie that doesn’t feature a Premier League side. This makes it arguably the least glamorous but also the most evenly matched.

Forest have been this year’s resident giant-killers. They defeated 14-time champions Arsenal in the third round and then eliminated holders and local rivals Leicester City with an emphatic 4-1 victory.

Having already managed two shocks, it would be typical for them to be knocked out by Huddersfield. Nonetheless, the Terriers provide a real threat to Steve Cooper’s men.

The Yorkshire club have been a real surprise package in the Championship this term. They currently sit in third place, following a run of 17 games unbeaten in all competitions.

This includes an upset of their own, knocking out Premier League side Burnley in the third round at Turf Moor.

The two sides have met twice in the league this season, with both clubs claiming one win each. It ought to be another tightly-fought contest.