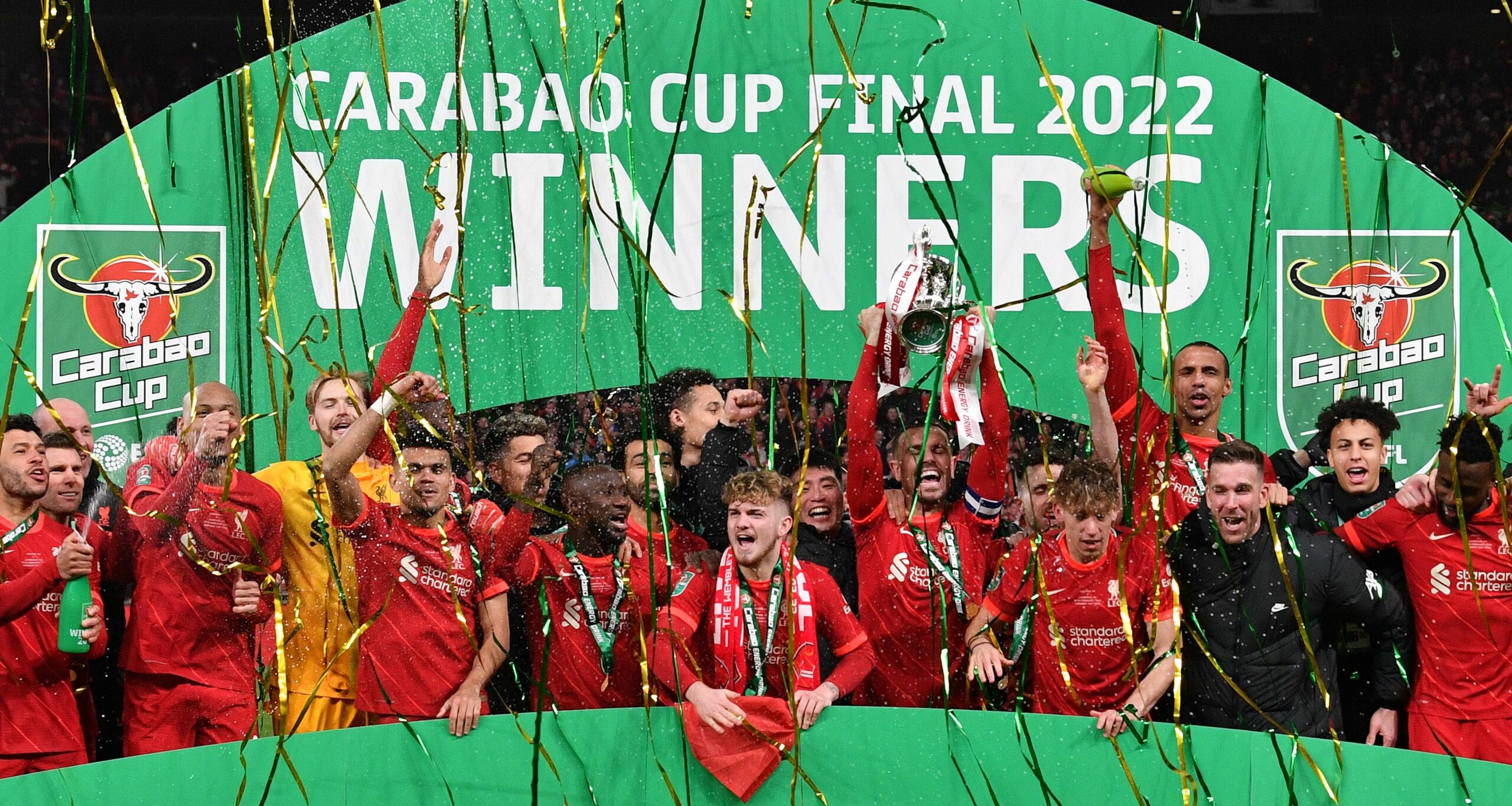 In one of the most thrilling 0-0s we’ve ever seen, Liverpool narrowly saw off Chelsea to win the first major trophy in the English season.

Both sides had plenty of chances to break the deadlock during regular play. However, a combination of brilliant goalkeeping, poor finishing and the linesman’s flag ensured that the game remained scoreless and went to a penalty shoot-out.

After ten penalties each, the two sides were still level, meaning it went down to the goalkeepers. Caoimhin Kelleher stepped up first and converted comfortably. Kepa Arrizabalaga could not follow suit, blazing his penalty miles over the crossbar.

Liverpool lifted the League Cup for the ninth time in their history – a record in the competition. It was also the first domestic cup of Jurgen Klopp’s reign at Anfield.

As for Chelsea, this was their fifth defeat in a domestic cup final in the last six seasons. They lost in this competition on penalties to Manchester City in 2019 and were defeated in the FA Cup finals of 2017, 2020, and 2021.

Here are the main talking points from the game.

Edouard Mendy had a fantastic game in goal for the Blues. He made a superb stop in the first half to deny Sadio Mane from close range and was also at his best to keep out Virgil van Dijk and Luis Diaz.

So it all seemed a little bit harsh when the Senegal international was taken off in the 120th minute. Manager Thomas Tuchel brought on Kepa Arrizabalaga in his place, evidently trusting the Spaniard to be better at saving penalties.

The former Athletic Bilbao man was at the centre of attention in his last visit to Wembley Stadium, when he defied then-manager Maurizio Sarri and refused to be substituted. His side ended up losing the penalty shoot-out.

Was this to be his moment of redemption? Well…no. It couldn’t have gone any worse. Kepa failed to save a single penalty out of 11 and then put his spot-kick into the stands.

Substituting a goalkeeper on for a penalty shootout is a move that could go either way. Louis van Gaal was hailed as a genius for it in Netherlands’ 2014 World Cup quarter-final against Costa Rica. Ole Gunnar Solskjaer was slammed for leaving Dean Henderson on the bench in the 2021 Europa League final.

Earlier in the season, Tuchel made the same substitution in the Super Cup final against Villarreal. It worked then, so it made sense to try it again.

But with the game that Mendy had, many have been left wondering whether he should have stayed on the pitch. Would he have won them the shoot-out? We’ll never know.

While one goalkeeper had a nightmare afternoon, the other had the game of his dreams.

Caoimhin Kelleher has been Jurgen Klopp’s trusted goalkeeper for the Carabao Cup. However, when it came to the final, many expected Alisson to come into the starting XI.

To our surprise, the Irishman kept his place. It seemed like a sentimental pick, but Klopp’s faith was validated by the youngster’s performance.

All afternoon, Kelleher looked confident in goal. He made a vital early save to deny Christian Pulisic from close range and also kept out Romelu Lukaku’s flick in the dying seconds of normal time. Then he stepped up and confidently tucked his penalty away.

Will Kelleher ever oust Alisson from the number one spot? Probably not. However, the Carabao Cup final showed that Liverpool have a fine back-up option.

We don’t want to have to keep talking about referees, but in this game it is fairly unavoidable. There were FOUR goals ruled out for offside during the match.

Kai Havertz was unlucky enough to see two strikes disallowed. But both of these were the correct decision – no controversy there.

It’s the other two that have drawn all of the attention. First, Joel Matip nodded in from close range after a smart free kick in the second half.

The celebrations didn’t last long, as VAR spotted an offside against Virgil van Dijk. The Dutchman didn’t touch the ball during the move but was ruled to have blocked Reece James, preventing him from making an attempt for the ball.

Technically, it was the correct decision. We’ve seen Aston Villa and Manchester United have goals ruled out in similar circumstances. But it’s still frustrating to see goals disallowed for minor infringements.

Then came Romelu Lukaku’s goal in extra time. The record signing raced through on goal from Trevoh Chalobah’s through ball, turned past Ibrahima Konate, and fired in at the near post – only to see the offside flag up.

The VAR officials had to get the dotted lines out, but the replays ultimately proved that Lukaku’s shoulder was just beyond Van Dijk’s left foot. It was a tight one, but the original decision stood.

Offside is a black-or-white decision. There has to be a cut-off point somewhere. But we’ve been having this debate ever since the introduction of VAR – do we really want to see goals ruled out because a forward’s shoulder was an inch too far forward?

Naby Keita wasn’t named in Liverpool’s starting XI. But, after an injury to Thiago Alcantara in the warm-up, the midfielder was drafted into the line-up at the last minute.

It was a fairly unspectacular performance from the former RB Leipzig man. He had one low shot well saved by Mendy, but did little else.

In the second half, the 27-year-old was perhaps lucky not to be given his marching orders after a tangle with Chalobah. Both players went for the ball, and Keita’s studs ended up in his opponent’s groin area.

VAR opted not to intervene on this occasion, much to the surprise of many watching at home. Chalobah was unhappy with the decision, revealing on Twitter that he needed stitches following the tackle.

The more you look at it, the worse it gets. This was a potentially game-changing decision that the referee got wrong. Chelsea can feel aggrieved.

We’ve talked about several key incidents that cost Chelsea at Wembley – Kepa’s sub, the disallowed goals, Keita’s potential red card. But if the Blues had been more clinical, none of that would have mattered.

Kelleher was twice at his best to keep Tuchel’s men out. Pulisic should have done better with a close-range effort early on but still forced a good save from the goalkeeper. Meanwhile, Lukaku was unlucky with his flicked attempt late on.

But there was little excuse for Mason Mount, who was guilty of spurning two golden opportunities. The first came shortly before half time when the Englishman volleyed wide from Havertz’s cross with the goal gaping.

The second was just after the break. Pulisic floated the ball over the top for the midfielder, but his shot struck the post with Kelleher rooted to the spot.

Perhaps the second one can be forgiven – the ball got slightly stuck under Mount’s feet, and he was barely an inch away from a perfect finish. But there are no excuses for the first one.