Analysis: Harry Kane gives Manchester City a taste of what could have been as Tottenham Hotspur blow the title race wide open 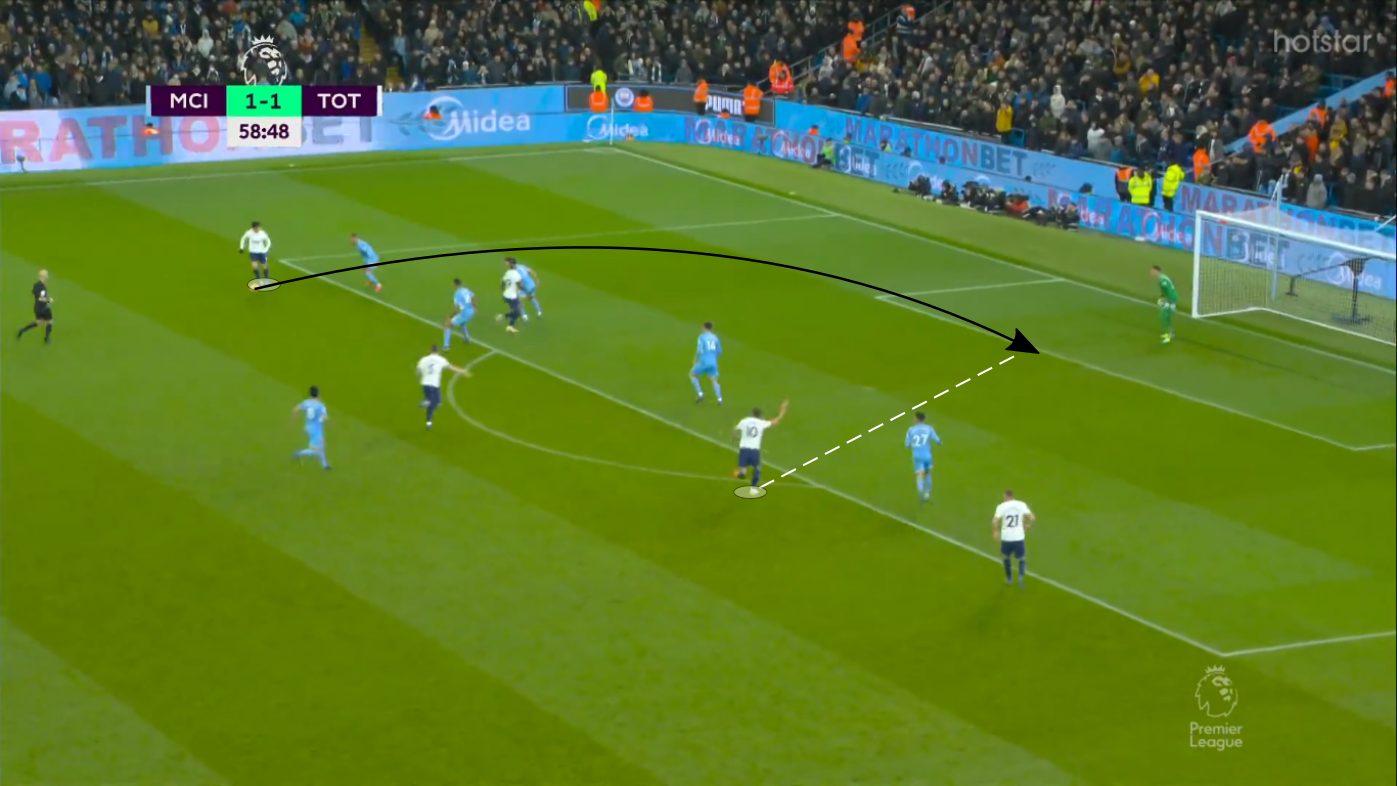 Manchester City have only dropped fifteen points after 26 English Premier League matches this season. One team is responsible for 40% of that tally – Tottenham Hotspur – who have become quite a bogey team for City of late.

Heading into their latest match, Tottenham had won three of their last four league meetings, shutting City’s star-studded attack out in each of those victories. They also knocked them out of the 2018/19 Champions League quarter-finals in dramatic fashion, denying Pep Guardiola’s side a shot at a historic quadruple.

All of their recent matches have also seemed to follow a very similar pattern – City dominate possession and territory, but Tottenham soak it all up in a compact defensive block and hit them hard in transition. They utilise the quality of Heung-min Son and Harry Kane in the process of scoring with one of their very few shots on goal. City then throw the kitchen sink in a bid to score an equaliser, which does not always work out as planned and sometimes leads to Spurs scoring a second.

In the reverse fixture, which also happened to be the first league fixture of the 2021/22 season, City had almost two-thirds of possession but lost by a solitary Son goal. All the talk at the time surrounded Kane, who missed the match as he was reportedly just one step away from joining City.

However, as the teamsheets for the most recent match will show you, that move did not go through.

As the xT (Expected Threat) plot will tell you, this match was played perfectly in accordance with the classic City-Spurs script.

And lastly, as any social media site will inform you, Kane is the talk of the town once again, this time because of what he did on the pitch.

City’s high press is one of the best in Europe, and it certainly was effective against Tottenham here as their 64 pressures applied in the attacking third was their second-highest tally in the league this season, while their pressure success rate of 38% was the highest in a league match when they have applied over 30 pressures in the final third.

However, they were carved apart on just one occasion early on in the match. As is almost always the case, that was all Tottenham needed to take the lead as Son got in behind the hosts’ high line and drew Ederson out of his goal before slipping a pass to Dejan Kulusevski who could not miss an open goal. Kane was at the heart of things again, as he received a progressive pass from Davies and turned it into the path of Son first-time, with the South Korean making a Conte-classic countermovement to find space in behind City’s defence.

The moment Kulusevski’s shot hit the back of the net, everyone watching knew exactly what was going to happen. We did have to improvise quite a bit as City equalised twice, including from the penalty spot in stoppage time, but ultimately, the typical City-Spurs script prevailed.

Under Antonio Conte, Tottenham have generally looked to defend in a 5-4-1 mid-block with the wide attacking midfielders pushing forward and pressing whenever they saw the chance to do so. There was no such pressing against City, as the visitors looked to stay as compact as possible and deny their technicians from having space to control play from the central areas of the pitch.

This certainly worked well, as City struggled to get forward in the central areas and were forced to try creating chances from out wide in the final third. They delivered a whopping 40 crosses in this match (their highest tally in the league so far, undoubtedly also bloated by the game state of them trailing), of which just five were successful.

Tottenham delivered just four crosses in the match, but two turned out to be assists.

The key difference, of course, was that Kane was the main target for Spurs’ crosses, while City’s deliveries looked to find the likes of Bernardo Silva, Raheem Sterling and Phil Foden, all of whom firmly fall on the shorter end of the height spectrum and are not the best one-touch finishers out there.

Suggesting that City would instantly become the best team there ever was or will be with a striker is not correct because the main thing Guardiola wants from his player is control. To gain control, he needs 11 players who are world-class with the ball at their feet, which is why Ederson is the best goalkeeper out there for City, even if better shot-stoppers are readily available.

This is also perhaps why Guardiola put all his eggs in the Kane basket last summer, as the England captain is among the incredibly few world-class strikers out there who are on the same level as most of City’s players in terms of on-ball quality (as was evident in his pre-assist for the opener). Karim Benzema is possibly the only other active player who fits this bill, but at 34-years-old, he would only be a short-term solution, which is not what City are after.

What separates Kane from the rest of City’s incredible technicians is that he poses a huge goal-threat every single time he gets into the box, as was evident in this match where he scored twice with four touches in the penalty area. If City desperately need a goal and get Kevin De Bruyne to spam dozens of crosses into the box with a man like Kane attacking them, each of those deliveries becomes exponentially more threatening to the opposition.

Whether Guardiola asks his higher-ups to try and sign Kane again at the end of this season remains to be seen. An alternative solution could be to sign a firefighter-type centre-forward, who knows that he will only be called upon in times of emergency. A good example of this would be Divock Origi at Liverpool.

Funnily enough, just a couple of hours before this match, Origi came off the bench for Liverpool in the 62nd minute against Norwich City, with Jürgen Klopp’s men trailing. Although the Belgian striker did not register any goals or assists, he did play a part in a comeback that saw his team come away with all three points in a 3-1 win.

Coupled with Tottenham’s victory, that result leaves Liverpool only six points behind the defending champions with a game in hand, so the gap could well be closed to three points by the time the Reds visit the Etihad Stadium in early April.

As Peter Drury said at full-time, a procession has become a race.