Tactical Analysis: Inter reduced their Champions League match against Liverpool to 11 individual battles and almost came away with something 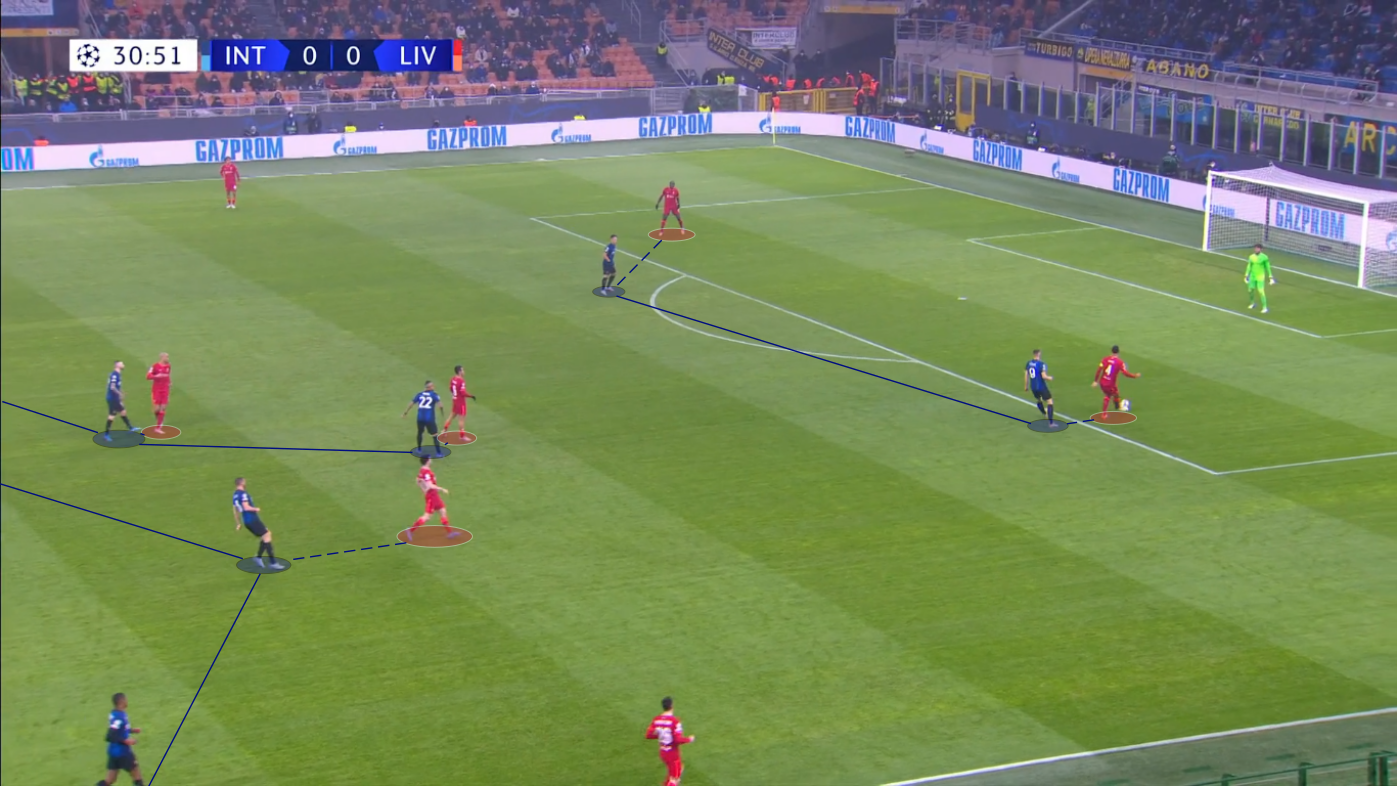 Football is a very simple game. Twenty-two people go around chasing a ball and try to make sure it goes in the opponents’ net more often than it goes in theirs.

Now, there are many ideas as to how these 22 people should run around, which is where the whole concept of tactics comes into the picture.

In other news, the Champions League has some huge ties from the very first round of the knockout stage this season.

Paris-Saint Germain just about beat Real Madrid in the first leg at the Parc de Princes on the first day of the round of 16, and on the next day, Liverpool travelled to Milan to face defending Serie A champions Inter.

Despite the rich European records of both clubs, this was only the third time they were drawn against each other in the premier continental cup competition.

Their only other Champions League meeting was in the 2007/08 round of 16, where Inter emerged 3-0 winners over the two legs. The two clubs went on different trajectories after that in terms of sporting success.

Inter’s glory days peaked at the end of the 2009/10 season, as they became the first Italian side to win the treble. They had to wait for 11 years before winning another Serie A title and failed to make the Champions League knockout phase since 2012.

By contrast, Liverpool endured relatively tough times for the next few years, finishing in the Premier League’s top four just once before Jürgen Klopp’s appointment as their manager.

The German manager completely changed the club’s fortunes, winning the Champions League in 2019 and lifting the domestic top-flight trophy for the first time in the Premier League era in 2020.

Heading into this match, the two sides were probably as close to equals as they had been in the last few decades. They were only separated by five spots in FiveThirtyEight’s rankings, as Liverpool were third and Inter eighth.

Both teams were also quite close to having fully fit squads, so they were able to name their true first-choice XIs, although the Italian side were missing Nicolò Barella through suspension.

New Inter manager Simone Inzaghi has not altered Antonio Conte’s 3-5-2 formation this season, but he has changed things in the sense that the players are now afforded a lot more freedom than they had under Conte with all his automatisms.

Going back to the point about football being a simple game, the Serie A champions have certainly looked to apply this idea in big games quite often this season by trying to assign each of their players one direct opponent, primarily out of possession.

Their shape lends itself very nicely to defending man-to-man against most back-four systems, especially ones that use attacking full-backs, and we all know that Liverpool use those.

Therefore, we got to see situations like this one where a centre-back (Stefan de Vrij) is higher up the pitch than a midfielder (Marcelo Brozović) quite often in the match.

The primary instruction for each of the players in such a system is to make sure that they are not beaten outright one-on-one, whether that is through dribbling or letting their man get comfortably goalside of them.

Inter’s players did a very good job of following this principle as all of Liverpool’s open play shots were either blocked or hit from outside the box.

There was only one occasion in the match where the hosts’ man-marking system proved problematic, which came in the 32nd minute after Mohamed Salah flicked a long ball on and Harvey Elliot managed to escape Hakan Çalhanoğlu’s attention, leading to a two-on-one situation.

The young Englishman’s cross was cleared away, though, so no damage was done.

Inter were also quite clever in possession, as they looked to circulate the ball around their own third before springing a long ball forward and looking to catch Liverpool’s high defensive line out.

While building up from the back, they operated in a 3-4 shape as Milan Škriniar moved out to a wide right position while the keeper split the other two centre-backs.

Ivan Perišić stayed relatively deeper on the left, but Denzel Dumfries ventured far forward on the right. In midfield, Çalhanoğlu stayed back alongside Brozović, while Vidal stayed further up the pitch.

They did manage to breach the visitors’ defence on a few times thanks to the hard work of their front two and Dumfries’ advanced position on the right, as the Dutch international got the better of Andy Roberston on a couple of occasions.

In this instance, it was the very smart defending of Ibrahima Konaté that saved Liverpool, as he intercepted Dumfries’ final ball and put it out for a corner.

The main takeaway from this match was that scorelines can be misleading. Inter quite clearly proved to be more than a match for Liverpool, who only scored thanks to two set-pieces, and even so one of those was a deflected shot.

Undoubtedly, things could have been very different had Çalhanoğlu’s early effort that rattled the crossbar been a little lower.

Or perhaps if Edin Džeko controlled the ball better when he had a chance to go through on goal in the 45th minute, or if Lautaro Martínez was a bit taller and had a longer neck as he just about failed to connect with Perišić’s cross in the 53rd minute.

Ultimately, Liverpool’s superior squad depth seemed to play a significant role in deciding the match. After looking by far the better side early on in the second half, Inter could not match Liverpool’s injection of fresh legs as they made only substitution before the 87th minute, while their opponents made two changes in attack and as many in midfield.

Overall, Inter were undoubtedly not outplayed here and quite firmly held their own against a side widely regarded as one of the best in Europe.

Although they are two goals down on aggregate, all hope is certainly not lost for them. Additionally, in terms of the Serie A title race, this performance certainly bodes well for their bid to defend the title.