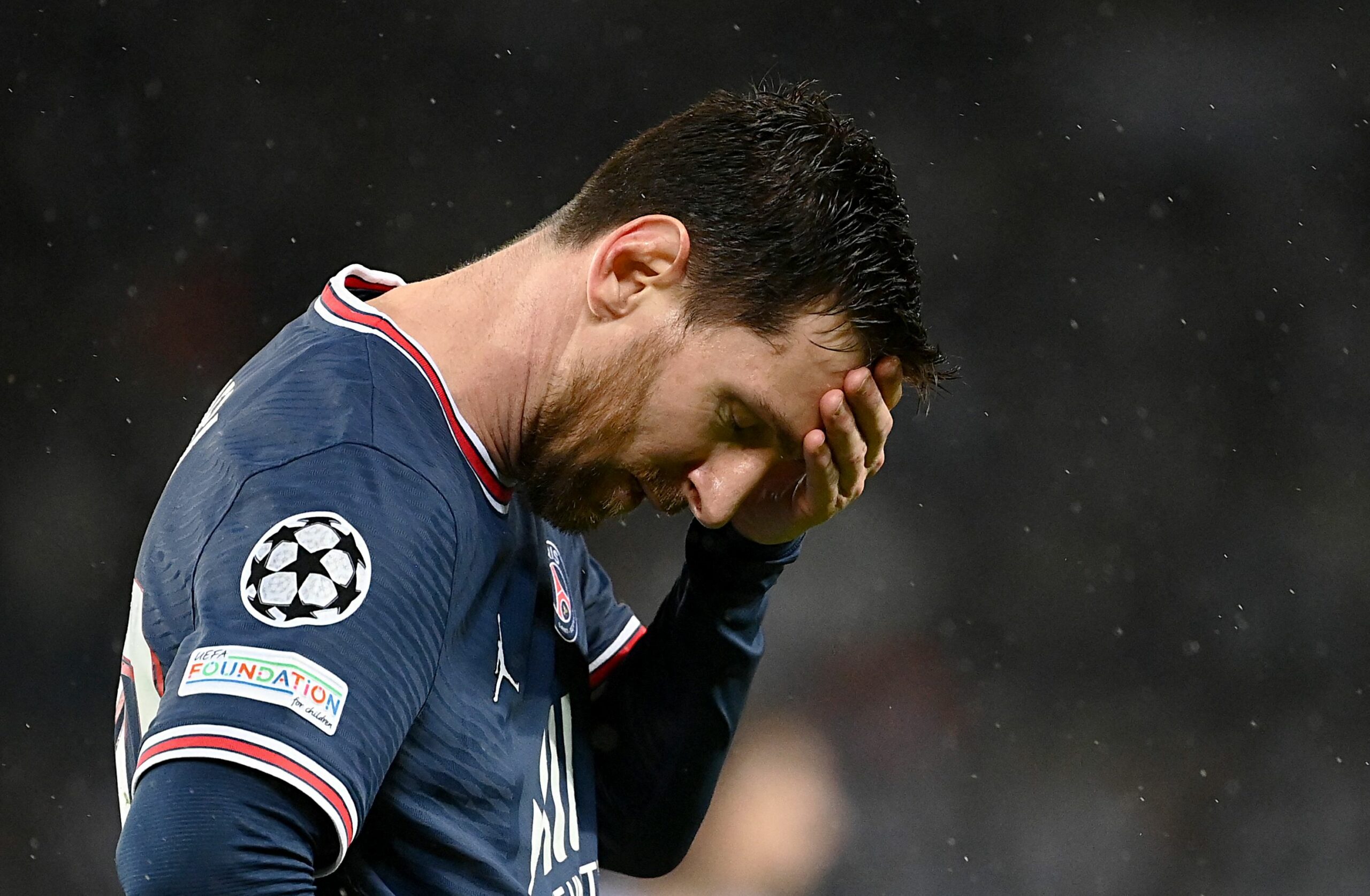 However, if there is one thing that he is average at, it’s penalties. And when we say “average”, we mean it – he has a 77% career conversion rate from the spot, which happens to be the midpoint in professional football.

On Tuesday evening, he was denied from 12 yards again. Up against former nemeses Real Madrid in the Champions League, the Argentine saw his penalty kept out by Thibaut Courtois, keeping the score at 0-0.

Thankfully for the forward, this wasn’t too costly, as Kylian Mbappe snatched a sensational last gasp winner. Paris Saint-Germain hold a one-goal lead heading into the second leg at the Bernabeu.

But he hasn’t always been bailed out after failing to convert a penalty. Here are five key penalty misses in Messi’s career.

The 2011/12 season was Messi’s best goalscoring campaign of his sensational career. La Pulga netted a breathtaking 73 (yep, SEVENTY-THREE) goals in all competitions, including 14 in the Champions League.

However, he missed a golden chance to get number 15 during the semi-final against Chelsea.

The score was 2-2 on aggregate, with the Blues leading on away goals. Didier Drogba brought down Cesc Fabregas early in the second half, giving Messi the chance to put his side in front. But he was unable to convert, slamming his penalty against the crossbar.

The ten-men of Chelsea, who had captain John Terry sent off in the first half, continued to defend valiantly. And in injury time, they nicked a second goal on the counter-attack through Fernando Torres, sending them to the final.

Champions League, against an English club, 2-1 up on the night, opponents down to ten men. Anyone getting a sense of deja vu?

It was deep into injury time at the Etihad Stadium when the Argentina international had the opportunity to extend Barcelona’s lead in the round of 16.

Joe Hart got down to his left to keep the penalty out, but when the ball fell back to Messi, everyone expected a simple finish. But extraordinarily, he nodded his effort wide of the post.

The miss ultimately proved meaningless, as Barcelona progressed 3-1 on aggregate. They later went on to win the competition that year, with Messi bagging an iconic brace in the semi-final against Bayern Munich.

While he had won everything at club level, international glory evaded Messi for many years. He had been on the losing side in the World Cup final in 2014 and in the Copa America finals of 2007 and 2015.

In 2016, he had another chance to get a gold medal around his neck but was once again left heartbroken. The game finished 0-0, with both sides having a player sent off in the first half. It was to be decided on penalties.

Arturo Vidal took first for Chile but saw his attempt saved by Sergio Romero. Up stepped Messi, with the chance to give La Albiceleste an early advantage in the shootout.

But it was an opportunity wasted, as he fired his penalty over the crossbar. Lucas Biglia was the only other player to miss, allowing Chile’s Francisco Silva to seal the trophy by slamming into the bottom corner.

Messi was in tears after the game and temporarily retired from international football after the match. He would get his redemption five years later when he starred in Argentina’s 2021 Copa America success.

The night before, Cristiano Ronaldo had scored a magnificent hat-trick to secure a point for Portugal against Spain. All eyes were on Messi to even the scores against Iceland.

His moment came in the 64th minute when the referee pointed to the spot after Hordur Magnusson had fouled Cristian Pavon. It was 1-1 at the time, with Alfred Finnbogason’s close-range effort cancelling out Sergio Aguero’s opener.

But Messi’s penalty was weak, and goalkeeper Hannes Halldorsson beat it away with relative ease. Argentina were unable to find a winner, ensuring a disappointing opening game.

They lost their next fixture against Croatia, but progressed through to the knockout stage thanks to a 2-1 win against Nigeria – a match in which Messi got the opener. They faced France in the round of 16 and were eliminated after a thrilling 4-3 defeat.

Retrospectively, the penalty miss meant very little. Even if they had won the game against Iceland, Argentina would still have finished second in their group. But at the time, it looked to be costly.

Before they were linking up together at the Parc des Princes, Messi and Mbappe were opponents in the Champions League. And these two lit up this tie, giving us a combined total of six goals across the two legs.

The Argentine had already bagged one from the spot in the first leg and netted a stunning 35-yard screamer in the reverse fixture to give Barcelona some hope at a comeback.

Those hopes grew even more when they were awarded a penalty on the stroke of half-time for a foul on Antoine Griezmann.

Messi stepped up to face Keylor Navas, a goalkeeper he had beaten on multiple occasions during his time in Spain. The Costa Rican came out on top this time, turning the strike onto the bar.

Would Barcelona have completed the comeback had Messi scored the penalty? Probably not – they still would have needed at least two more goals. But the miss effectively ended all hopes of a turnaround.