Tactical Analysis: How Frank Lampard’s switch to a fluid 4-4-2 for Everton worked a treat against Leeds United 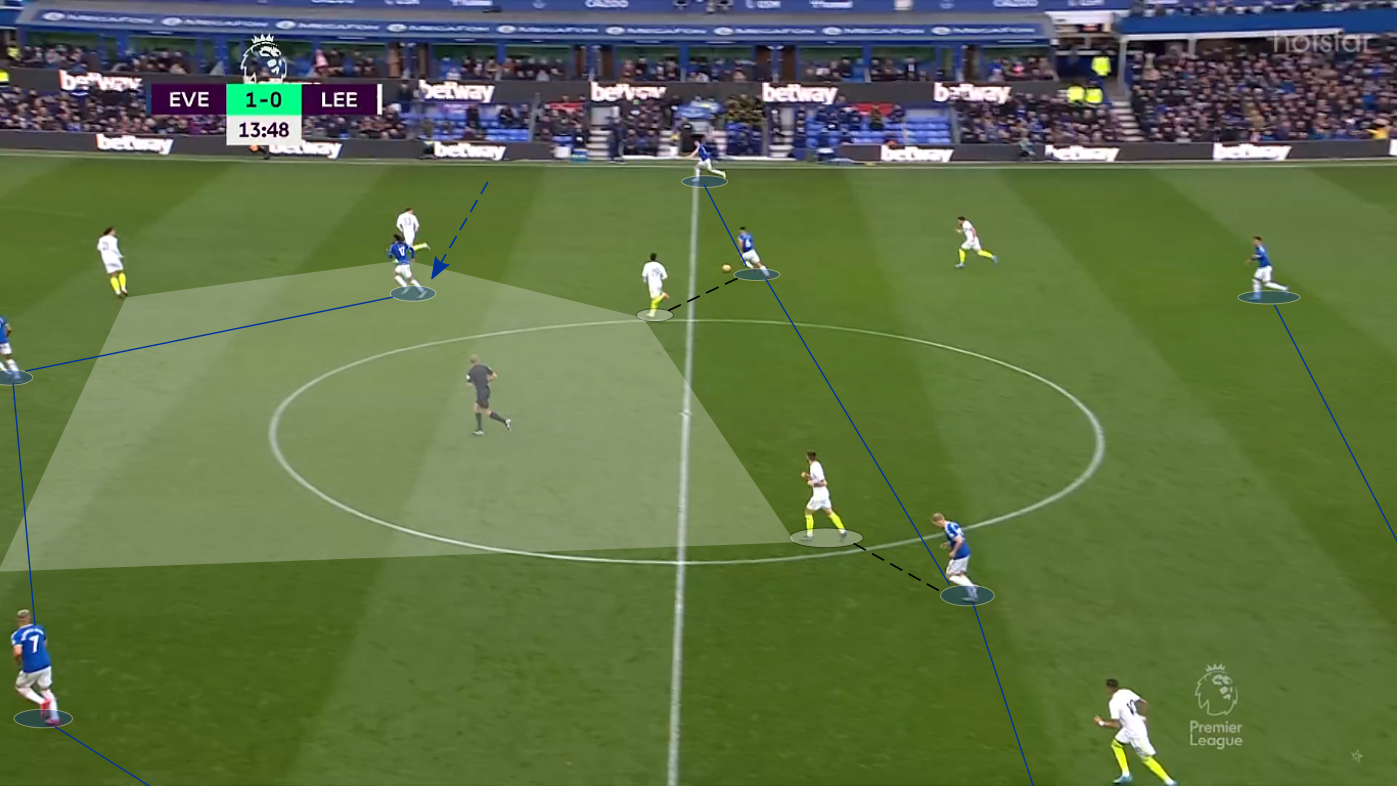 Frank Lampard went into his first English Premier League match at Goodison Park with his Everton side just two points above the relegation zone, so they desperately needed a result.

Their opponents, Leeds United, were just four points and one spot above them in the table, so this was a big match for them too.

After a disjointed performance in a 3-4-2-1 formation at Newcastle, Lampard devised a new system for this match as we had expected. They lined up in a 4-4-2, with Donny van de Beek making his full debut in central midfield.

A quick glance at the hosts’ passing network from the match will tell you that this was no straightforward 4-4-2 system.

Generally speaking, having players clumped together in a passing network is not a good thing. It usually indicates a lack of dynamism in attack, but that was not the case for Everton.

Their front line was incredibly fluid and dynamic in this match and probably was the highlight of their performance.

Building up from the back, Everton’s structure resembled a straightforward 2-4-4 as the full-backs and wide midfielders pushed forward.

This is relatively standard for a side fielding a 4-4-2 formation, so the real intrigue was in the front line, where the wide midfielders tucked inside into the half-spaces very often.

As Leeds United’s two-man midfield was occupied in man-marking the Everton duo, there usually was lots of space behind them in the central region of the pitch, which the hosts looked to exploit in this way.

This becomes clear to see in the touchmaps of the two wide midfielders – Alexander Iwobi and Anthony Gordon – from this match.

Everton did not want to construct too many slow attacks, as is evident in the fact that they only had 42% of possession.

Their centre-backs always looked for the longest passing option, which is why just over 20% of their passes were short (travelling less than 15 yards).

The Toffees also looked to transition from defence to attack as quickly as possible, typically using long balls from the back to do this. Their front two contested 18 aerial duels, and although they lost over two-thirds of them, this was not a big problem.

The narrow positioning of the wide midfielders was used in transitions, as they were tasked with picking up the second balls after the aforementioned aerial duels and looking to bring it forward. This is why winning these aerial duels was not a big concern for the hosts.

The wide midfielders were the most important players in Everton’s attacking system, and they delivered with seven key passes in the match, which is more than the entire Leeds United side managed.

This statistic also highlights how good Lampard’s side were at restricting the visitors’ attacking threat. They did so by defending in a compact 4-4-2, focusing on limiting central ball progression.

Although they applied a decent amount of pressure in the opposition half, Everton did not care about winning the ball high up the pitch and predominantly looked to engage closer to the touchline in their own half. Their defensive actions heatmap from the match backs this up:

The match’s shotmap clearly shows Everton’s dominance, as they restricted Leeds United to just two attempts from inside the penalty area while getting 11 away themselves.

Before anyone gets carried away, we must acknowledge that Everton’s opponents were Leeds, who are quite a unicorn in the Premier League in terms of playing style.

Everyone knows about their heavily man-marking based defensive set-up, but when it goes wrong (as it did in this match), they can make any attack look like the hottest thing in all of England.

This is not to say that the Toffees’ front men were not fantastic as their fluidity carved the opposition defence open, but it would be unrealistic to expect them to have this sort of impact in every match.

With just their second league victory since September, Everton have opened up the gap to the drop zone to five points now, so relegation fears must have been alleviated to a good extent around Goodison Park.

They are also four points off 12th-placed Crystal Palace now, so a decent mid-table finish is very much still on the cards.