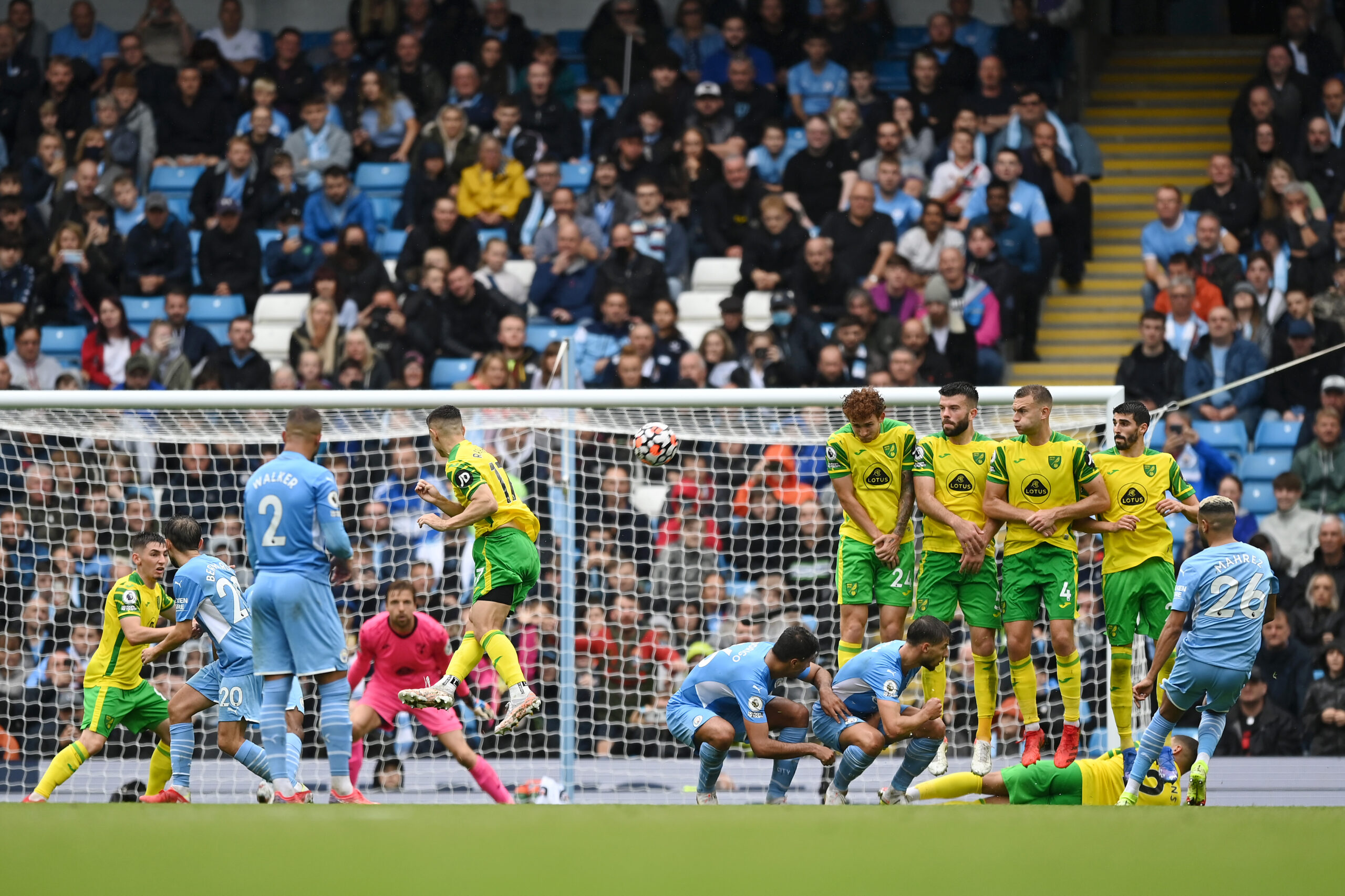 Relegation-battling Norwich City will be looking to prove their Premier League credentials when they take on table-topping Manchester City at Carrow Road.

Saturday’s Premier League action closes out in Norfolk as the Canaries aim to build on their three-game unbeaten run in England’s top-flight (W2, D1).

Dean Smith’s side had Wilfried Zaha’s embarrassing spot-kick to thank for walking away with a 1-1 draw in Wednesday’s encounter against Crystal Palace.

However, Norwich’s upturn in form has seen them reduce the gap on 17th-placed Newcastle United to a single point, significantly boosting their hopes of ensuring top-flight survival come May.

Man City eased past Brentford 2-0 at home in their previous fixture, extending their unbeaten run in the Premier League to 14 straight matches (W13, D1).

But despite boasting a nine-point lead over second-place Liverpool, Pep Guardiola’s men are not off the hook yet, with the Reds having a game in hand.

The Cityzens will have to fulfil their status as overwhelming pre-match favourites at Carrow Road if they are to keep Liverpool at a safe distance.

Man City made light work of Norwich in the reverse fixture back in September, cruising to a comprehensive 5-0 triumph at the Etihad Stadium.

The Cityzens have now won eight of their last 12 Premier League meetings with the Canaries (D2, L2), netting a resounding 41 goals in the process.

The reigning English champions have only lost one of their last eight top-flight matches at Carrow Road (W3, D4), albeit that reverse came in their most recent visit to this venue back in September 2019.

After losing three consecutive Premier League games at home, Norwich are now unbeaten in their last two in a row (W1, D1), winning the first half ‘to nil’ on both occasions.

The Canaries have bagged six goals across their last three league outings at home, as many as they had in their previous 15 at Carrow Road beforehand.

Backed by an inspiring three-game unbeaten run, Smith will be looking to become the first Norwich boss since Chris Hughton in February 2013 to go four Premier League fixtures without losing.

That could be easier said than done, though, with the hosts suffering 13 defeats in their last 15 top-flight encounters against defending champions (W2).

But it is worth mentioning that both of Norwich’s wins in that 15-game period came at the expense of non-other than City.

A 1-1 draw with Southampton at St Mary’s in their most recent Premier League travel halted Man City’s run of seven away league victories.

But Guardiola’s team will feel confident about their bounce-back hopes here, having won 30 of their last 36 league matches against sides starting the day in the relegation zone (D5, L1).

Adding to the Cityzens’ confidence, they are unbeaten in their last 11 Premier League fixtures on the road (W9, D2) since a 1-0 defeat at Tottenham on Matchday 1.

Scoring first would significantly improve City’s chances of grabbing another triumph as they have won all eight away league games when breaking the deadlock this season.

Raheem Sterling could be the visitors’ danger man here. He has tallied five goals and two assists in his last seven Premier League appearances against Norwich.