Analysis: Erik ten Hag or Mauricio Pochettino — who is the better fit for Manchester United? 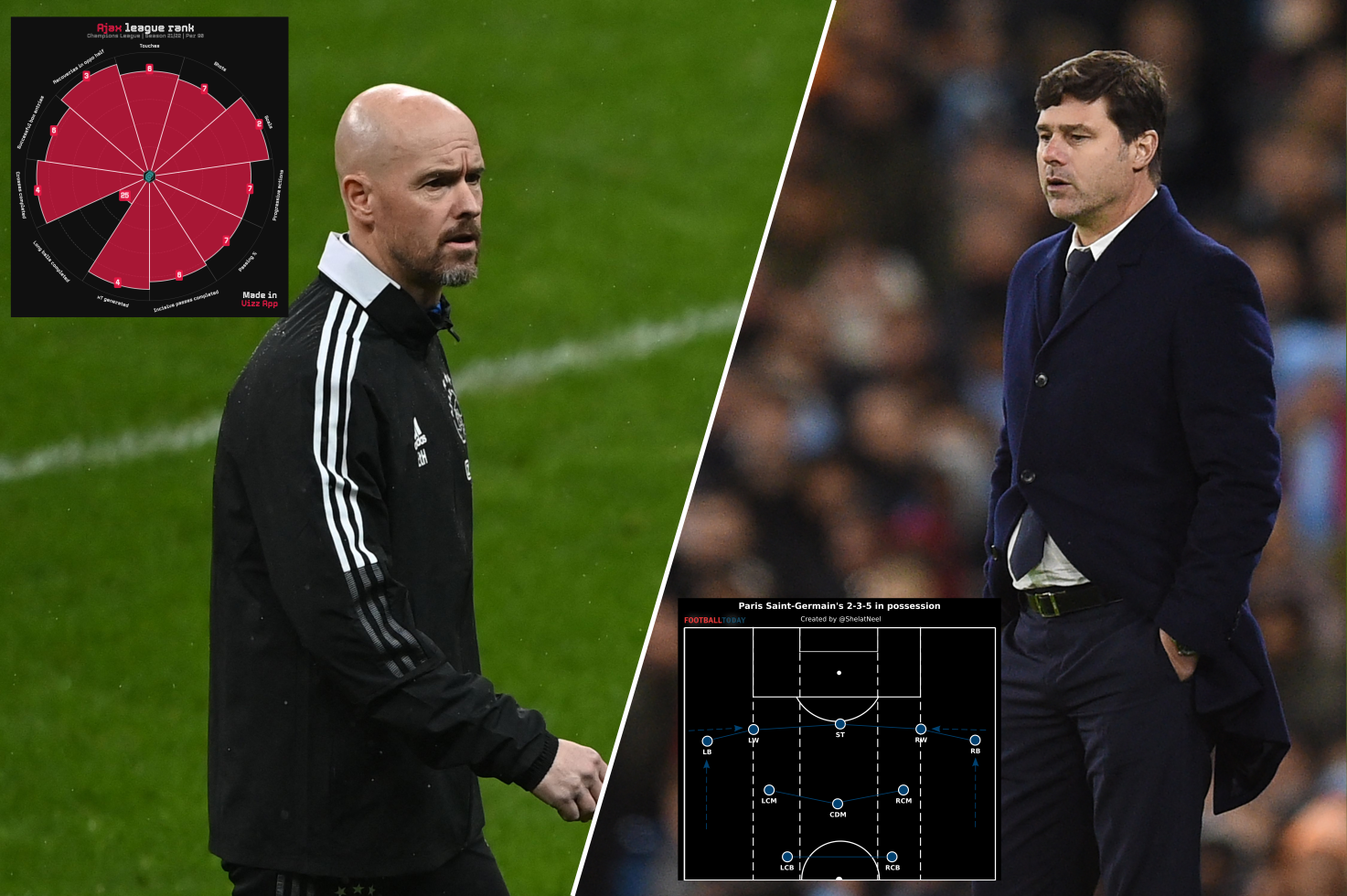 The summer of 2022 could prove to be crucial for Manchester United’s future, as the next manager of the club is expected to be appointed at this time.

After Ole Gunnar Solskjær’s departure, Ralf Rangnick has taken charge for an interim period until the end of the season. He will then move to a consultancy role, so he should ideally have a big say in his successor.

Neither is out of contract in the summer, but a deal could be struck with either club as was the case when Rangnick came in from Lokomotiv Moscow.

On that basis, it makes sense to compare the two candidates to try and get an idea of who might be a better fit at Old Trafford.

Football is simply a sport where 22 people chase the ball and try to put it in the opponents’ net more than it gets put in their net. How they try to do so, though, can vary vastly from team to team and manager to manager.

Assuming that Rangnick will be given a good deal of freedom in his consultancy role and have a strong influence in selecting the next manager, it becomes essential to compare his football philosophy with the candidates.

Rangnick is famously associated with the idea of ‘gegenpressing’ (counter-pressing), which essentially involves trying to win the ball back as soon as possible after losing it by pressing very quickly and aggressively.

His teams have a greater emphasis on transition-based attacking than patient possession-play, as was evident after the first few weeks of his tenure.

In short, he prefers counter-attacks and catching the opposition defence out when it is unorganised as opposed to patiently carving a way through staunch defensive blocks.

It should be added, that the German manager has had to move away from his favoured style of play of late.

Part of this could be attributed to adjusting to the Premier League, but one major factor undoubtedly must be the tight fixture schedule which does not offer any chances to instil an entirely new philosophy in a squad that is so accustomed to playing in a different tactical framework.

Pochettino is somewhere between the two philosophies of patient possession-play and rapid transitions. He likes his sides to construct attacks in sustained possession slowly and encourages counter-attacks after winning the ball back.

The Argentine sets his sides up to press and counter-press, but certainly not with the intensity of a typical Rangnick team.

Ten Hag very clearly falls into the category of coaches that subscribe to the positional play philosophy. Among Premier League coaches, he is reasonably similar to Manchester City’s Pep Guardiola.

His footballing vision is not very close to Rangnick, as his teams prefer to dominate possession and territory and wear their opponents down.

While they do counter-press, they do so primarily as a defensive measure and recycle possession after winning the ball back rather than directly heading towards the opposition goal.

So, this round belongs to Pochettino, although it is important to reiterate the actual importance of footballing philosophies in the selection of the next United manager depends heavily on the amount of influence Rangnick will have in his consultancy role.

Ten Hag and Pochettino are currently managing two very similar clubs from a domestic standpoint, yet the reasons behind that are vastly different.

Both Ajax and Paris Saint-Germain are by far the most dominant sides in their respective leagues at the moment and have been close to the top for a while now.

The Eredivisie club have attained this position on the back of a rich history, helped by an incredible youth development system and a very advanced recruitment philosophy.

By contrast, PSG rose to the top relatively recently after a state-funded takeover that made them one of the wealthiest clubs in world football.

There is no point in comparing the two clubs’ domestic seasons as the overall quality of the two leagues is vastly different. In any case, they are both effectively unchallenged at the top this season with the best attacks and defences both in terms of actual goals and Expected Goals (xG).

The only level playing field is the Champions League, which does have a massive sample size warning as every team has only played six games.

It is the best way we can directly compare the two sides, though, and it quickly becomes apparent that Ajax have had a comfortably better campaign than PSG:

The Dutch side enjoyed their best-ever group stage campaign in the competition this season. They were helped by a favourable draw as they avoided the big-hitters and faced Beşiktaş, Borussia Dortmund and Sporting Lisbon.

PSG had a tougher group which included Man City, RB Leipzig and Club Brugge, but with the last two clubs operating at levels quite far from their best, they were expected to progress and ended up doing so comfortably.

For what it is worth, FiveThirtyEight’s Global Club Soccer Rankings say Ajax are the fourth-best team in the world right now behind Bayern Munich, Man City and Liverpool, while PSG are two spots behind them with Chelsea placed between the two.

Since their SPI (Soccer Power Index) metric does account for domestic leagues and opposition quality, this is probably the best overall comparison out there.

Both teams like to dominate possession with an average of well over 60% in all competitions this season. Either club has used a 4-3-3 and 4-2-3-1 at some point this season, but Ajax prefer the latter while PSG usually use the former.

The Dutch side’s system in possession is undoubtedly the more intricate, as ten Hag has devised a winning formula based on the profiles of players he has in each position.

The 52-year-old tactician has adapted and evolved accordingly in the four or so years that he has been in charge of Ajax, and the latest system looks like this:

Defensive midfielder Edson Álvarez drops in between the centre-backs in possession while the full-backs have different roles due to the positioning of the wingers.

Noussair Mazraoui moves inside into midfield to partner Ryan Gravenberch since Antony holds the width on the right, while ex-Man United man Daley Blind gets up and down the left flank where he either progresses the ball from deep or delivers crosses after making overlapping runs as Dušan Tadić operates more as an inside forward on the left.

Attacking midfielder Steven Berghuis tends to drift out to the right, as striker Sébastien Haller leads the attack in a central position.

The Eredivisie leaders have been brilliant defensively in their 4-2-3-1 structure as well, in fact winning the ball back in the final third more often than all but one side in the Champions League this season.

We analysed Ajax’s current system and the personnel involved in greater depth after they broke a few records in the Champions League, so if you are interested in understanding their system better, we highly recommend that you read this piece:

It has been hard to work out Pochettino’s first-choice XI at PSG this season due to the many injuries and absences in the star-studded squad but, tactically speaking, he has kept things more straightforward by setting his team up to play in a simple 2-3-5 in possession as the full-backs push up and wingers tuck inside.

In truth, Pochettino’s job at PSG this season has been more of a test of his man-management skills than his tactical ideas. When you have the likes of Lionel Messi, Kylian Mbappé and Neymar in your team, scoring goals can never be a problem, but defending might be.

Unfortunately, the Argentine manager has not found a solution for that issue, as was evident in his side’s Champions League matches against Man City. This does not seem to be an issue in their hopes to reclaim the Ligue 1 title, but it could prove costly continentally.

This is quite uncharacteristic for a Pochettino side as both of the sides he managed in the Premier League – Tottenham Hotspur and Southampton – were renowned for working very hard out of possession.

However, it is understandable given the statures of the players he has to work with and their willingness to help their team without the ball.

To summarise, ten Hag is undoubtedly enjoying a better time at Ajax than Pochettino at PSG, although there are reasons for that.

In terms of systems, Ajax’s is the more intricate while PSG’s is relatively simplistic, which adds up when looking at their managers’ philosophies.

Suitability to the Manchester United Squad

Finally, let us quickly predict how well both managers’ styles might suit the current United squad.

The Red Devils have not played slow possession-based football since the days of Louis van Gaal, so the current crop of players will undoubtedly need some time to come to grips with ten Hag’s ideas.

The main issue is among the attacking players where United have too many central attackers and barely anyone who can operate out wide.

Donny van de Beek should be excited by the idea of a reunion with his old manager, but it is hard to envision him and Bruno Fernandes thriving in the same system.

Pochettino’s use of counter-attacking should be quickly implemented by a squad that has become so used to it over the last few years.

However, as Rangnick is finding out, the amount of work the players are capable of doing out of possession is not a great deal.

It unquestionably is better than what the 49-year-old Argentine is seeing at PSG, though, and since the intensity of his defensive system is lower than Rangnick’s, this might not be such an issue.

Regardless of who takes charge of the club next, United should be looking to strengthen in midfield and at right-back in the summer transfer window, so the appropriate profile of players can be brought in depending on the new manager’s requirements if he is appointed at the right time.

As is the case with almost anything, there are pros and cons to both options for United.

Given enough time, ten Hag has clearly shown the capability to build a team that can dominate against most other sides while playing an attractive brand of possession-based football that quite evidently works in the Premier League.

The biggest question for him is that his and Rangnick’s philosophies do not quite match, so if the latter deems it necessary that his successor gets the side playing a style of football that he prefers, this appointment might not be the right one.

If the German is happy to let the club be guided by a different ideology, then ten Hag is certainly one of the best options available in world football right now.

Pochettino should be able to pass Rangnick’s philosophy test even if not with flying colours, and his experience in the Premier League should be able to help him settle in a different environment quite quickly.

The lessons in man-management that he is learning in Paris should be helpful too, but the performances he has been overseeing are not the most encouraging, so that is one of the doubts that United’s hierarchy might have while considering appointing him.

No matter who they choose to appoint next – ten Hag, Pochettino or even someone else – the most important thing for United is that they make that decision quickly and well in advance of the transfer window so the next manager can assemble the pieces he wants in preparation of what seems to be a bit of a rebuild job.