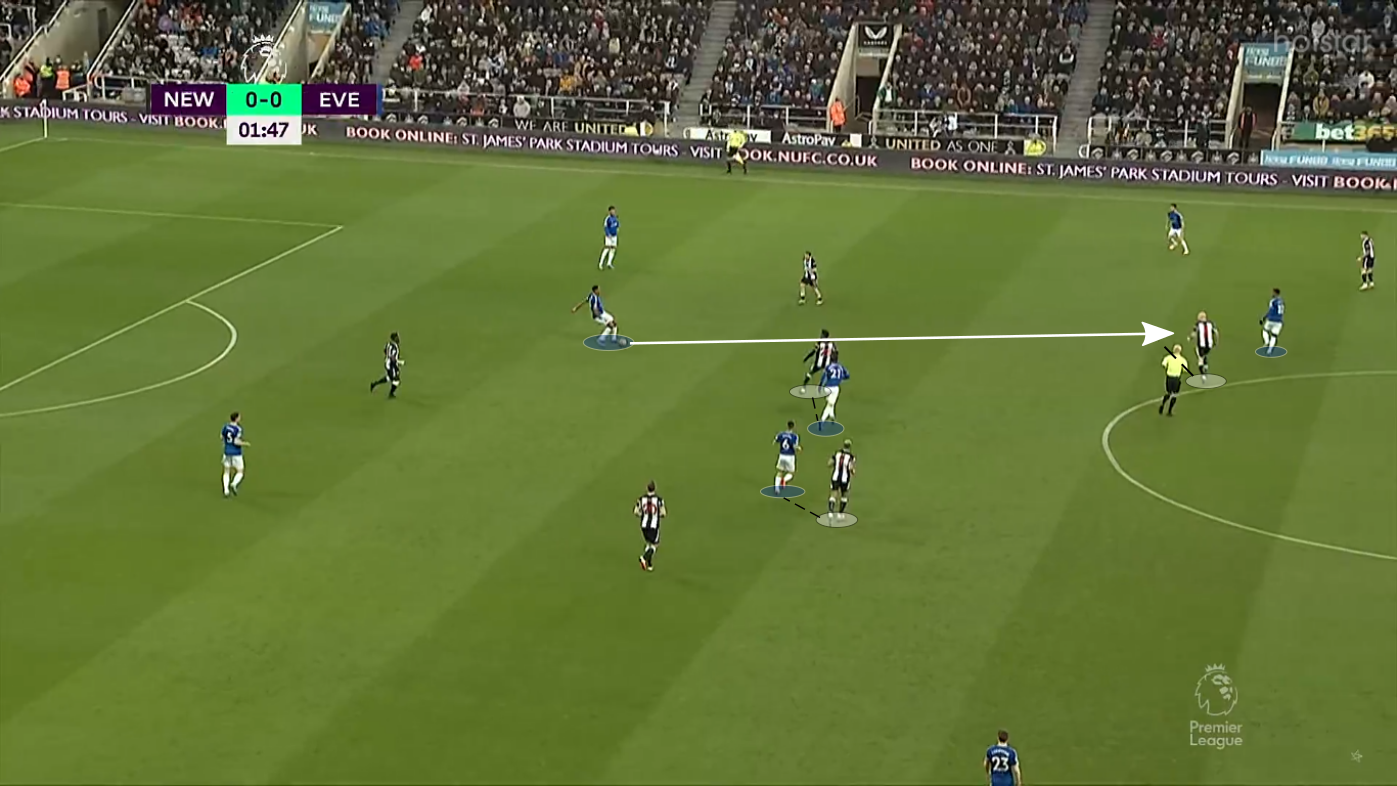 After a quick late winter break, English Premier League action was back in full swing as gameweek 24 began with Everton’s visit to Newcastle United. This match marked new beginnings for both sides, as this was new Everton manager Frank Lampard’s first league match in charge of the club, while the hosts were playing for the first time since their blockbuster transfer window ended.

Everton had also made a couple of deadline day signings as Dele Alli joined from Tottenham Hotspur alongside Donny van de Beek, who left Manchester United on loan until the end of the season. Neither of them was named in the starting line-up, though, so the only full league debut was for Matt Targett, who had moved on loan.

Everton had used this sort of 3-4-2-1 to very good effect in Lampard’s first match in charge — the 4-1 FA Cup win against Brentford — so expectations must have been high against a Newcastle side that had just one clean sheet in the last two months.

As their passing network from the match shows, though, they had a torrid time in Tyneside.

It should be said that the data behind this network is only until the 24th minute of the match when Everton had to make their first substitution as Demerai Gray picked up an injury, but the threshold for a player link is just three, four completely isolated players is quite a bad look.

Keeping the ball was not a problem for the Toffees as they had over 60% of it, but just 18.54% of their touches were in the final third, so most of their possession bore very little attacking threat.

Credit must be given to Newcastle, who defended very high up the pitch with a man-to-man approach in their 4-3-3 against Everton’s back-three…

…along with their numerical advantage in central midfield which allowed them to turn the ball over high up the pitch quite often, especially early on in the match. Newcastle’s extra midfielder Jonjo Shelvey had a key role to play here in screening the two Everton wide attacking midfielders, who often looked to receive passes in the half-spaces, and the English midfielder did a superb job of it as his 15 recoveries were more than anyone else’s tally in the match.

This certainly is a new defensive approach for Newcastle even under their new manager, and this becomes clear in comparing their ball recoveries from this match…

…and the rest of the games that Eddie Howe took charge of.

Defensively, meanwhile, there were problems galore for Everton. After scoring a very scrappy goal from a set-piece in the 36th minute, they took less than 60 seconds to concede in a similar fashion. Throughout the match, dead ball situations remained an issue for the visitors, as they conceded a total of eight shots from such situations.

Overall, Lampard’s side let in a grand total of 20 shots, 16 of which were from inside the box.

Allan Saint-Maximin took centre stage once again with his tremendous ball-carrying which tormented the right side of Everton’s defence throughout the match, where he also completed eight of his 10 attempted dribbles.

Nonetheless, Everton’s defending was certainly not up to scratch, so they have a lot of work to do in that regard too.

Perhaps the best option going forward might be a change in shape. The 3-4-2-1 naturally does not seem fit to accommodate Everton’s late winter signings (playing van de Beek in a double pivot most likely is a recipe for disaster), while also exposing their lack of depth at wing-back. Lampard mostly used a 4-2-3-1 or 4-3-3 at Chelsea, and that could well work at Goodison Park too.

Newcastle United are now just one point behind the Toffees (although they have played one more game), and things are looking a lot more optimistic for them as big January signings such as Bruno Guimarães start to settle in the squad, so Everton need to start getting results instantly to avoid getting sucked further into a relegation battle.