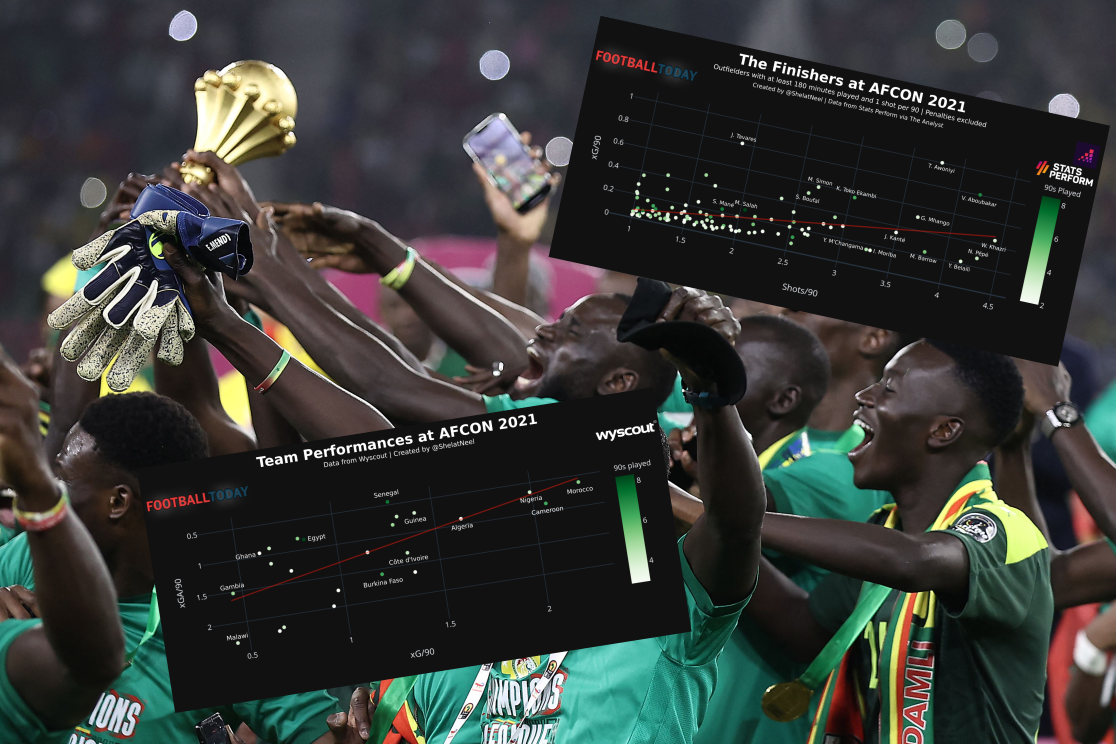 After 52 matches filled with drama and intrigue (and in certain cases some very staunch defensive blocks), the 2021 Africa Cup of Nations has finally drawn to a close.

Senegal were crowned Africa Cup of Nations champions for the first time in their history after beating Egypt on penalties in the final, but there was lots more to talk about from the rest of the tournament.

Let’s get right into the thick of things with the help of some data. Of course, we have to pay heed to a massive small sample size warning, but there certainly are some fascinating conclusions to be drawn.

Based on the underlying numbers, it becomes clear that the primary emphasis at the tournament was on defending, as there are a fair few sides who kept things quiet at both extremes of the pitch, but none who were open at both ends.

Three sides were comfortably the best at the tournament – Morocco, Cameroon and Nigeria. Funnily enough, none of them made the final, which is a perfect representation of the luck factor involved in tournament football.

The winners, Senegal, did have the most solid defence at the tournament, but their attack did not impress.

Luckily for them, most of their blanks were drawn in the group stage, where they scored just once (and that too from the penalty spot), but as they progressed through knockout stages, things started to click.

Egypt had a reasonably solid defence but a really poor attack which was even worse than the likes of Mauritania and Sierra Leone.

It should hardly be a surprise that each of their four knockout matches went to extra time (and a further three went to penalties), and they played by far the most minutes of any side in the competition.

Two sides that deserve a special mention are Burkina Faso and Gambia, who undoubtedly exceeded expectations by getting as far as the semi-finals and quarter-finals respectively.

Although Gambia’s underlying numbers look pretty bad, they deserve full credit for how far they got as many of their players who ply their trade in the third and even fourth tiers of European football, so for a competition debut, this was a stellar performance.

As we explored in our analysis of Algeria’s group stage exit, the main issue was simply a failure to take their chances, whereas Ghana’s numbers look a lot bleaker so their decision to change managers can easily be justified.

AFCON 2021’s tournament average of under two goals per game was significantly lower than we saw in the most recent European Championships and Copa América. This was partly down to some poor shooting, but the goalkeepers deserve their flowers too.

As this scattergram depicts, the majority of the goalkeepers conceded fewer goals than the Expected Goals on Target (xGOT) model would have expected them to.

Burkina Faso’s Farid Ouédraogo and Malawi’s Charles Thomu faced a fair few shots on goal but did manage to hold their own, as did Mauritania’s Babacar Diop.

However, the stars of the show were the two Egyptians – Mohamed El Shenawy and his replacement Mohamed Abou Gabal, who also made four saves in penalty shoot-outs.

The two biggest names between the sticks at AFCON, Eduoard Mendy and André Onana, did not really catch the eye. In Mendy’s case, this was because he faced very few shots as the competition’s meanest defence was guarding his goal, but Onana did make some notable errors.

They both stayed above the xGOT model, but the same cannot be said for Ghanian keeper Joseph Wollaccot and Ethiopian Teklemariam Shanko.

As we saw in the team performance scattergram, defensive solidity was one of the key features of AFCON 2021. Naturally, the players had a lot of work to get through in this regard.

Surprisingly, Ivorian winger Max-Alain Gradel had the most tackles and interceptions per 90, closely followed by his compatriot Serge Aurier.

Daniel-Kofi Kyereh, Ola Aina and Wilfried Ndidi also impressed in terms of recoveries, while Sofyan Amrabat and Aïssa Bilal Laïdouni looked good in that regard too.

The majority of the statistical outliers played relatively fewer minutes, but two exceptions are full-backs Achraf Hakimi and Collins Fai, with the former looking considerably better.

Among those who played the most minutes, Burkina Faso’s Blati Touré and Steve Yago’s numbers stand out the most.

Although there were relatively fewer goals at AFCON 2021, this was primarily due to a huge xG underperformance and not a dearth of chances created.

At the top of the assists charts, you will find two full-backs – Collins Fai and Issa Kaboré – along with Martin Hongla with three, but digging a bit deeper into the numbers, there are some interesting observations that can be made.

Among the leaders of the assists charts, Kaboré and Fai do not even qualify with the chances created per 90 cut-off, while Hongla’s numbers look alright but certainly far from exceptional. This clearly shows the issues with using raw assists as a metric to analyse playmaking ability.

Sofiane Boufal comfortably leads the way in terms of chances created per 90, while Ibrahim Sangaré, who also looked decent in the defensive metrics, did not give a bad account of himself at all.

New Brest man Youcef Belaïli and his compatriot Riyad Mahrez have the best all-round numbers with a high volume of chances created along with Expected Assists (xA), highlighting the fact that Algeria’s issue was finishing.

Samuel Chukwueze, Moussa Doumbia and Jim Allevinah created a decent number of chances but not great ones in terms of quality.

The opposite is true for Kelechi Iheanacho, Josete Miranda and Nicolas Ngamaleu, who fared best in terms of xA per 90.

Once again, the biggest outliers have played relatively few minutes, so we must also look at some players who got to the latter stages of the tournament.

As ever, the top-scorer at AFCON was a man not many would have predicted to be overly prolific in their pre-tournament predictions.

Vincent Aboubakar not only scored three more goals than the man behind him in the scoring charts (his teammate Karl Toko Ekambi), but also managed the joint second-highest tally at a single AFCON tournament in the competition’s history with eight.

Unsurprisingly, the Cameroonian captain’s underlying numbers also look very impressive, as is the case for Taiwo Awoniyi and Wahbi Khazri, who averaged the most shots per 90 in the tournament.

On the flip-side, Nicolas Pépé, Belaïli, Musa Barrow, Ilaix Moriba and Youssouf M’Changama took a healthy number of shots but from poor positions.

Gabadinho Mhango (who scored each of Malawi’s three goals at the tournament) and Guinean forward José Kanté put up some very impressive numbers given the sides they were playing in. Meanwhile, the big stars such as Salah and Mané did not impress with their open play shooting.

As always, this was a gripping edition of the Africa Cup of Nations with storylines and upsets galore. Underdogs such as Burkina Faso and Gambia got much further in the knockout stage than anyone expected.

Algeria and Nigeria suffered bitter disappointment quite early on. Senegal’s solid defence won them the tournament as Egypt’s lack of attacking edge ultimately proved costly, while Morocco must have been disheartened with an exit in the quarter-finals given their impressive performances.

Among the players, lots of the radar names stood out, especially in the goalkeeping and finishing departments. As aforementioned, Belaïli has already earned a move to Europe on the back of a solid tournament to go with a very good FIFA Arab Cup, while others including Aboubakar, Ngalmeu and Amrabat stood out in the data.

We will only have to wait for about a year and a half for the next edition of AFCON due to the postponement of this one.

Before that, African football will once again take centre stage when the play-offs for the 2022 FIFA World Cup take place, which includes a repeat of the final.

Stats courtesy Wyscout and Stats Perform via The Analyst.