Tactical Analysis: Egypt’s game plan just about worked against Senegal in the 2021 AFCON final, but they faltered on penalties 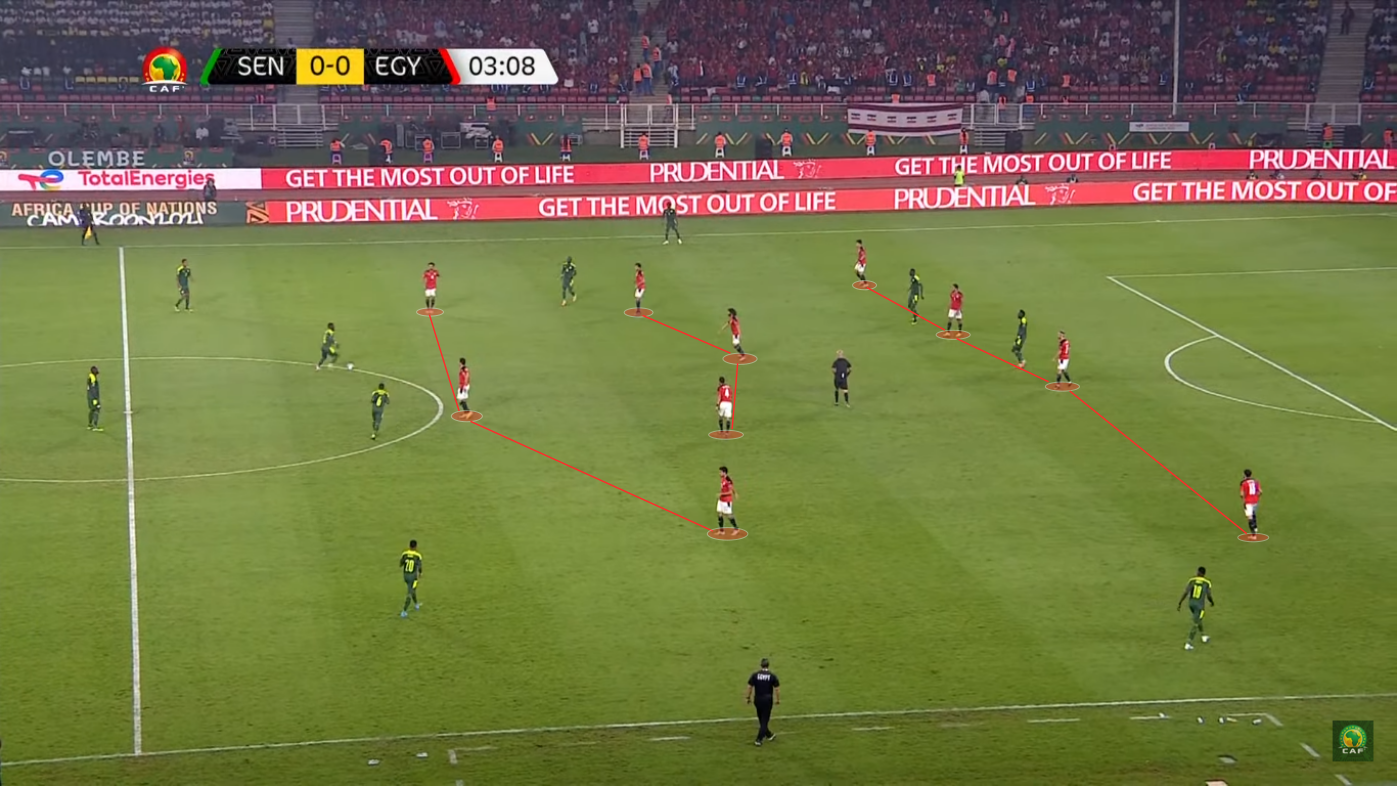 29 days after the opening match, the big day was finally here. It was the day of the 2021 Africa Cup of Nations final, as third-time finalists Senegal faced the most successful side in the competition’s history in Egypt, who had won it seven times.

Senegal had lost both of their previous finals, including in 2019 against Algeria.

Egypt’s route to the final was certainly the tougher one. After finishing second to Nigeria (who were surprisingly knocked out by Tunisia in the round of 16) in their group, the Pharaohs faced Côte d’Ivoire, who had knocked out defending champions Algeria in the process of topping Group E.

120 minutes of football failed to yield a goal, so Egypt had to go through by winning the penalty shoot-out. Morocco then took the lead against them in the quarter-final, but Carlos Queiroz’s side equalised and eventually scored a winner in extra time.

Hosts Cameroon also took the semi-final to penalties, where the Pharaohs prevailed again to seal a spot in the final.

Senegal went undefeated in the group stage despite scoring just once in their first three matches. They finished first in Group B and found a relatively comfortable road to the final in front of them.

Injury-hit Comoros put up a brave fight but ultimately fell short in the round of 16, as Senegal won 2-0. In the quarter-final and semi-final, Equatorial Guinea and Burkina Faso were defeated with a 3-1 on both occasions, so Aliou Cissé’s men began preparing for a final.

Senegal unquestionably had the stronger squad, and this was clear in the line-ups for the final as they had nine men who played their club football in Europe’s top five leagues, while over half of Egypt’s XI played domestically.

Egypt’s game plan was no secret — they would sit back in their solid defensive block and try to restrict Senegal as much as possible in the final third.

Any chances to counter-attack would be taken, but they would be careful never to overcommit while going forward, and if the match finished 0-0, there would be no complaints from their side.

High up the pitch, they focused on preventing central ball progression for Senegal as Mostafa Mohamed looked to man-mark the opposition defensive midfielder.

The wingers stayed relatively narrow to prevent the centre-backs from having too much space in front of them, although very little pressing was done.

In their own half, Egypt’s defensive block got a lot more compact and resembled a clear 4-3-3. Once again, blocking central progression was the main focus.

Egypt were happy to concede possession in the match, which is why Senegal had a comfortable majority of it. Their problem then became finding a way to break down the Egyptian block, and to their credit, they did a decent job of it.

Although their line-up was displayed in a 4-4-2 on paper, in possession, they looked a lot more like a side in a 4-3-3. Nampalys Mendy operated as the defensive midfielder, sometimes even dropping in between the centre-backs, while the Cheikhou Kouyaté and Idrissa Gueye had the license to get forward.

Ismaïla Sarr and Sadio Mané alternated between staying wide and drifting inside, which impacted the full-backs’ decisions to get forward in the final third.

It was this rotation out wide that caused the most problems to Egypt’s defence, especially when Senegal’s wingers were able to isolate themselves against the full-backs.

The early penalty that Mané missed was won in this way, as the Liverpool man burst past Emam Ashour and drew a foul in the box.

Throughout the match, Senegal created several crossing opportunities for their wide men, who ended up delivering 16 such balls into the box, but none of them led to the ball ending up in the back of the net.

Abdou Diallo won six aerial duels, while Kalidou Koulibaly made four tackles and interceptions and committed as many fouls.

Unsurprisingly, the match went to extra time and then penalties. As aforementioned, Egypt must have been pleased heading into the shootout, as they had successfully converted all eight spot-kicks in the two shoot-outs prior to this match, while their goalkeeper Mohamed Abou Gabal had made three saves.

Although he managed to add to that tally, Eduoard Mendy matched him, meaning that Mohamed Abdelmonem’s miss proved incredibly costly.

So, although Egypt managed to restrict Senegal to just eight shots on target in 120 minutes of football, they finally faltered on penalties.

It should be said that irrespective of the amount of preparation put in, trying to win three penalty shoot-outs in a row is certainly not a sustainable way of winning a tournament, so some might feel that Egypt had this failure coming.

To Senegal, it does not matter how they won as long as they did so. Their first-ever AFCON triumph will surely be remembered for a long time in the country, and based on their performances in the tournament, it must be said that this was deserved.